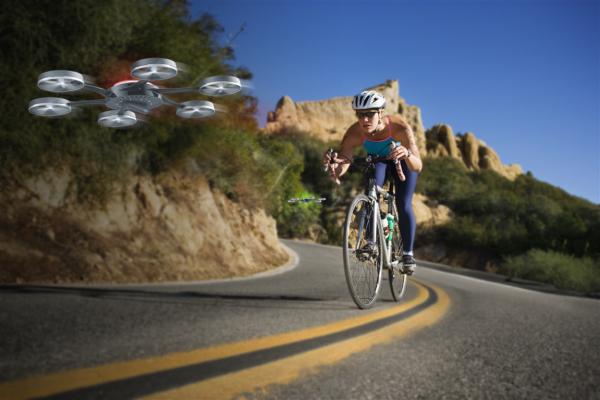 Drones - the next big thing in cycle safety, or a case of too much blue sky thinking?

The product design firm that brought the world the Sony Walkman has unveiled a conceptual design of a drone that it says could help improve the safety of lone bike riders.

Drones have attracted a lot of attention due to their use by the military as well as strong rumours, neither confirmed nor denied by the Metropolitan Police, that they were deployed above London during the Olympic Games in 2012.

They were back in the headlines last month as a result of the news that Amazon.com is considering using them for deliveries.

That’s despite the fact that the unmanned aircraft have not yet having been approved for civilian use in the United States, although Amazon CEO Jeff Bezos says it may be five years before they come into use.

But in a post on its Design Mind blog, the consultancy Frog highlights several potential civilian uses, included mock-ups of how they could look in action.

“This is our vision of a future where drones are not spies, weaponry or scary agents of evil; they can be trusted aids that assist humans tasked with doing some of the most dangerous work we know,” says Frog product development director, Cormac Eubanks.

And besides rescuing people trapped by forest fires or preventing avalanches, one example of that “dangerous work” appears to be riding a bicycle alone on the road.

“The Cyclodrone is a flying beacon that can be configured to fly ahead of and behind a bicycle rider on roads to improve visibility and reduce the chances of being struck by a vehicle,” writes Eubanks.

“The drone is paired to the rider’s mobile phone and flies along a predetermined path programmed before the ride.

“Sensors in the drone maintain a safe distance from the rider using a combination of an Infrared sensors and a WiFi connection strength.

“The large beacon on top creates a highly visible warning to cars for safer solo outings on narrow one-lane roads and a camera records dynamic video of each ride.”

One potential drawback, of course, is that the driver may be so mesmerised by the site of the drone, particularly if they haven’t seen one before, that they fail to notice the cyclist it is designed to protect.

And while the device might be suitable in open countryside with very little traffic, how would it cope in more built-up areas with heavy congestion including high-sided vehicles, with the cyclist often moving faster than motorised traffic?

Then there’s the issue of whether civilians can actually use a drone in the first place. As with many fields of technological development, the law is slow to adapt, and as the UK’s Civil Aviation Authority (CAA) points out, rules surrounding use of unmanned aircraft were drawn up primarily with model aircraft in mind.

Highlighting that “there are no established operating guidelines so operators may not be aware of the potential dangers or indeed the responsibility they have towards not endangering the public,” the CAA says:

On the plus side, the built-in camera could be a nifty feature – imagine being able to not just fancy yourself on a solo Tour de France break while you’re out riding on your own, but being able to watch aerial shots of your bid for glory afterwards?

And just imagine some of the near-miss videos that could pop up on YouTube from riders having a drone follow them on their commute.

There’s no word on whether the drones might ever see the light of day, let alone how much they might cost, and the Design Mind piece may be nothing more than a piece of blue sky thinking, for want of a better phrase – although certainly you could imagine them being used in the emergency situations highlighted.

Their use by cyclists is therefore fanciful, perhaps – but so too, 40 years ago before the Sony Walkman came along, was the idea that you’d be able to listen to your own choice of music through headphones while on the move.