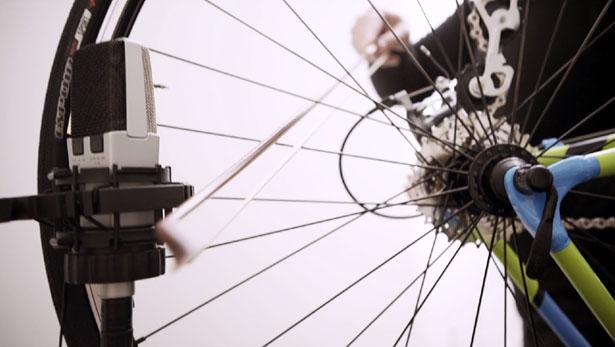 Bespoken, the debut single from Johnnyrandom, contains no traditional musical instrumentation - rather it's entirely made up of noises that a bicycle can make.

Johnnyrandom, also known as composer Flip Baber, took a childhood fascination with “the sound of the spokes” and expanded it to explore the full range of sounds that a bike can make.

Alongside Bespoken, which is available on iTunes, Baber released a promotional video - below - in which he talks about his inspiration for the track over the top of an excerpt of his single.

“I remember my first time riding a bicycle, it felt like freedom,” Baber says in the video. “I associate the sounds of a bike with this feeling, as a composer I wanted to capture this through music, specifically by using the sounds of bikes and their components.”

“When I was a little kid I used to attach cards to my bike to hear the sound of the spokes. I thought to myself, what if I could tune my spokes to make a melody. Years later that’s exactly what I’m doing.

“This music has no traditional instrumentation, synthesisers, samplers or drum machines. Through music, I want to change the way that people perceive their surroundings. I hope that this will inspire others to look at everyday surroundings with more curiosity and wonder.”

In the video you can see Baber using brake levers to make a percussive click, releasing air from a valve to create a hiss which is not too dissimilar to a high-hat, and even playing his spokes like a string instrument.

The result isn’t the awkward amalgamation of noises that you may expect. Instead, Bespoken offers a graceful, symphonic audio track that you would struggle to believe was created using only bike bits.

Baber's track Bespoken is not the only example of bicycle made music that we've seen. Back in 2011, composer Roger Lima created a track titled Specialized Beats, using - you guessed it - two Specialized mountain bikes as percussive instruments. The video is below.

Both Lima and Baber’s bicycle instrumentation feature technical sound editing, but neither can honestly claim that they’ve made their bikes into instruments. Back in 2008, Korean designer Joseph Kim showed off a set of handlebar grips called Sound From Wind which allow him to make that very claim.

Obvious magazine reported the creation, which uses the motion of the bicycle to sweep air down ceramic tubes to make a sound similar to a flute. Keys on the underside of the handlebars modulate the tone, giving a rider the ability to play a tune as they ride.