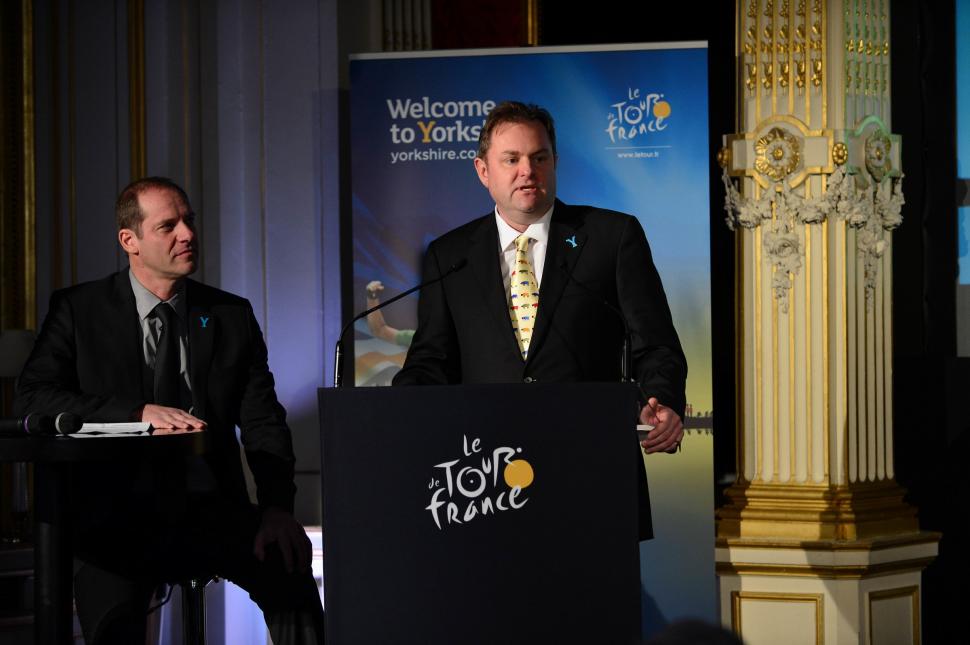 Plans have been revealed for an annual three-day stage race in Yorkshire to be organised by ASO as a lasting sporting legacy event for Yorkshire hosting the Grand Départ of this year’s 101st edition of the Tour de France – with the first edition currently scheduled to take place in May 2015.

Writing in the Guardian, Will Fotheringham says that ASO, Welcome to Yorkshire and British Cycling have already held discussions regarding the new race and that further talks are due to take place.

Christian Prudhomme of ASO, a frequent visitor to Yorkshire both during the bidding process and afterwards, said: "We want to do something. We want something to remain after the Grand Départ has happened."

According to the Guardian, earlier plans to either run a stage race in Yorkshire this year or move the Critérium International there in 2015 were ruled out – the former due to time constraints, the latter because its March date wasn’t suitable for Yorkshire’s weather at that time of year.

As a result, mid-May looks the likeliest time to put the race on – a time of year when it would certainly coincide with the Giro d’Italia. Outside the WorldTour, the Tour of California and Vuelta a Castilla y Leon also currently take place in the middle of the month.

The opening two days of this year’s Tour see an opening stage from Leeds to Harrogate followed one from York to Sheffield – the race then heads to France via a stage from Cambridge to London – but Welcome to Yorkshire’s Gary Verity wants other parts of the region to play host to top-level cycling.

"We will look to spread the event around Yorkshire so that places that haven't received the Tour this year will get the benefit,” he said.

"It will be the same UCI ranking as the Critérium International [which is on the UCI Europe Tour and is categorised 2.HC], and with ASO involved the quality of the riders and teams will be of the highest standard."

The Guardian says that Verity envisages that the Friday of the race would have a time trial followed by a short road stage, with two longer road stages on the Saturday and Sunday.

British Cycling’s cycle sport and membership director, Jonny Clay confirmed to the newspaper that it has been involved in discussions, but said: "We need to be assured that all new international event applications meet a number of criteria.

"They include legacy and sustainability so we're not just looking for events which are successful in the short term but over many years and with obvious benefits to the wider cycling community."

Meanwhile Prudhomme has confirmed that the success of British cyclists at the Tour de France – and in particular, Sir Bradley Wiggins’ victory in 2012, the first by a rider from these shores – was instrumental in the decision to award the Grand Départ to Yorkshire, as was the growth in cycling in Britain.

He said that Florence was the original frontrunner, but Yorkshire also had to see off a Scottish-led bid, backed by British Cycling, that originally envisaged the Tour starting in Edinburgh and remaining north of the border but subsequently extended to an itinerary that would also have taken in England and Wales.

"London in 2007 was my first year at the head of the Tour," Prudhomme explained. "The popular fervour, the enthusiasm, were incredible.

“But it was another world compared to the Grand Départ in Yorkshire. Bradley Wiggins was a great track rider but didn't have the palmarès that he has now; Mark Cavendish was riding his first Tour and had not even won the first of his 25 stages and Chris Froome was still in Africa. It was another era.

"In London in 2007 we said we would come back to England, for certain, but we thought it would be London. In my head it was going to happen 10 years later, and that was the direction we were moving when we had the bid from Yorkshire – what changed the game was the exceptional success of British cyclists on the road.

"Before [the 2012 edition of] Paris-Nice Florence had the edge over Yorkshire for 2014, but then Brad won the Dauphiné and the Tour and the London Olympic Games were a magnificent high point.

"Between March and August 2012 we said we would have to come to England as soon as possible after a British rider won the Tour, and there were four stages in the process – Paris-Nice, Dauphiné, the Tour, the Olympics. That's why we went for Yorkshire over Florence.

“For Yorkshire to win ahead of Florence is no small thing. Florence is one of the most beautiful cities in the world, a really exceptional place, and the Tour has never started from Italy. I could cite other cities but those were the two finalists – the success of the British cyclists tipped the balance."

Last year, ASO was among the companies looking to take over the organisation of the Tour of Britain when British Cycling, which owns the race, put it out to tender, but the event will continue to be organised by SweetSpot, which has done so since it was relaunched in 2004.

The Surrey-based company is also launching the Women’s Tour stage race, which will be played out in Northamptonshire, Bedfordshire, Suffolk, Essex and Hertfordshire this May.