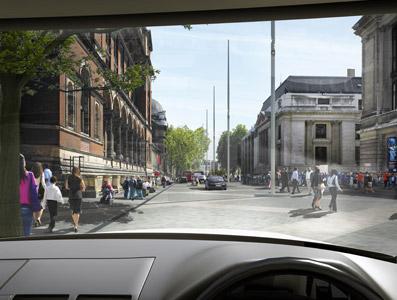 Mayor of London Boris Johnson has officially opened an innovative diagonal crossing at London’s Oxford Circus that does away with features such as railings and other clutter to try and make busy streets safer for all road users. Meanwhile, Channel 4 News has reported that a similar ‘naked streets’ scheme in Kensington has helped accident numbers plummet by two thirds from levels seen before its implementation.

That scheme, on a mile-long stretch of Kensington High Street from Edwardes Square to Queens Gate, was completed in 2003 and has led to accident numbers there falling from 150 in 1999/2000 to 53 in 2007/08. Over the same period, the number of serious accidents fell from 17 to 11.

The project involved major work to infrastructure at 11 points along the road, including pelican and other crossings, road junctions, traffic lights and the removal of railings. The latter in particular represent a danger to cyclists, both when riding straight ahead and being forced towards them by cars passing too close, and especially when placed on the inside of a left turn, with a number of fatalities due to riders having no escape route to avoid being crushed by a turning HGV.

The Royal Borough of Kensington & Chelsea (RBKC), one of Britain’s wealthiest local authorities, is among the pioneers of the naked streets philosophy in the UK. It is currently undertaking an even wider-reaching project on Exhibition Road, which runs North-South from Kensington Gardens to South Kensington Underground Station and is home to institutions such as Imperial College and the Science Museum.

That initiative will take the naked streets concept a stage further and will see kerbs removed to provide one continuous, flat surface between pavement and road. However, to allay safety concerns, the council has modified the original plans to provide black drainage strips to delineate the footpath from the carriageway, as well as 600mm-wide rumble strips to provide an audible warning.

Not everyone is in favour of the planned scheme, however. The charity Guide Dogs has voiced concerns that even with the revisions mentioned above, the new layout represents a danger to blind road users, and is reportedly resorting to the legal action to prevent it going ahead in the format currently being proposed.

Naked streets were pioneered in the 1980s by the Dutch traffic engineer Hans Monderman, and his shared space concept has been widely adopted throughout Europe, perhaps the most famous, not to mention extreme, version being found in the village of Makkinga in The Netherlands.

Although local authorities in the UK have been slower to implement Monderman’s philosophy than their counterparts in some other European countries, several have introduced schemes, albeit often on a small scale.

Besides the RBKC initiatives mentioned above, similar projects have been completed in the Wiltshire village of Seend and the London Borough of Ealing, among others, and shared space is also a central facet of the proposed Brighton Marina development.