Subscribe
Back to news
news
Miscellaneous
Art and design
Innovation 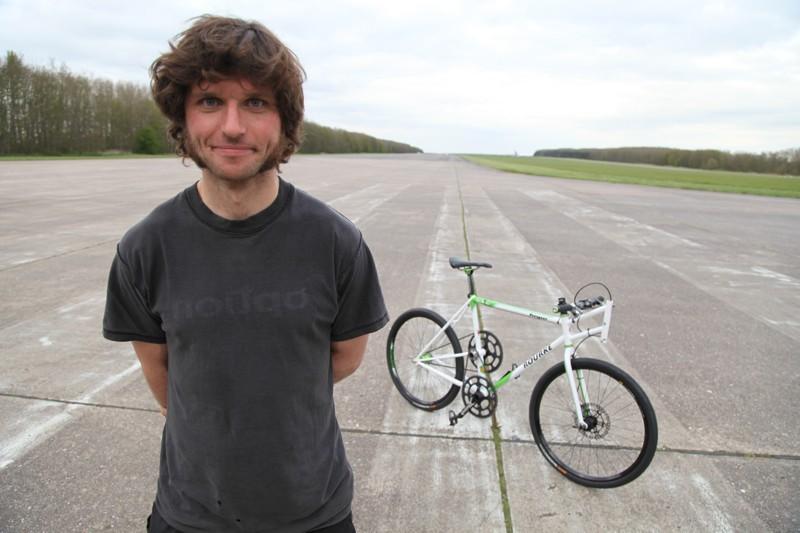 Next Sunday's episode 3 of Channel 4 series Speed with Guy Martin sees Isle of Man TT racer attempt to take to the sky under his own steam...
by Simon_MacMichael

Guy Martin, seen on TV last week setting a new British motor-paced speed record on a bicycle, will be using pedal power again on his Channel 4 series next Sunday as he attempts to set a new world speed record for human-powered flight.

A trailer for the show appeared at the end of last night’s episode 2 of the series, which saw Isle of Man TT racer Martin take to the water of Lake Bala in Wales on a motorbike as he sought to establish a new world record for aquaplaning.

The trailer for the programme, which will air at 8pm on Sunday 12 January, included a brief glimpse of Martin riding a time trial bike encased in a transparent fairing with wings, fuselage and tailplane attached to it.

Guy is on a mission to do the seemingly impossible: fly using muscle power alone. He wants to build the world's fastest human powered aircraft: a plane without an engine that Guy will cycle into the air.

He heads to Southampton University where, on 9 November 1961, Derek Piggot became the first man to fly under his own power.

Forty two years later, Guy is ready to break into the history books with another team from the university. They've got seven months to build a plane from scratch and equip Guy with the skill, power and endurance to pilot it.

He begins by learning how to fly a glider with stunt pilot Guy Westgate. He also visits a velodrome to measure his cycling power output and embarks on a programme of intense physical training.

Finally, Guy is ready to put his plane to the test against the UK's leading engineers in the Icarus Cup, where he sets out to pilot the fastest ever human powered aircraft.

Here’s a video of 2012’s inaugural edition of the Icarus Cup, which is organised by the Royal Aeronautical Society.

A teaser video released by Channel 4 ahead of next week’s programme shows Martin finding out first-hand exactly what a glider is capable of when pushed to its limits, in this case by stunt pilot, Guy Westgate.

While Martin’s record attempt relies solely on his own ability to get his machine airborne, there are close links between cycling and the earliest days of powered flight.

Last month marked 110 years since Orville Wright made the first flight in the Flyer aircraft he had designed and built with his brother, Wilbur.

In 1892, the brothers had established their own bicycle sales and repair shop, launching their own brand in 1896. They used the profits generated by the business to fund their experiments in flight.

While there are arguments over whether the brothers were the first to successfully get a powered aircraft off the ground, they are credited with making the breakthrough in developing the three-axis control system still used in fixed-wing aircraft today.