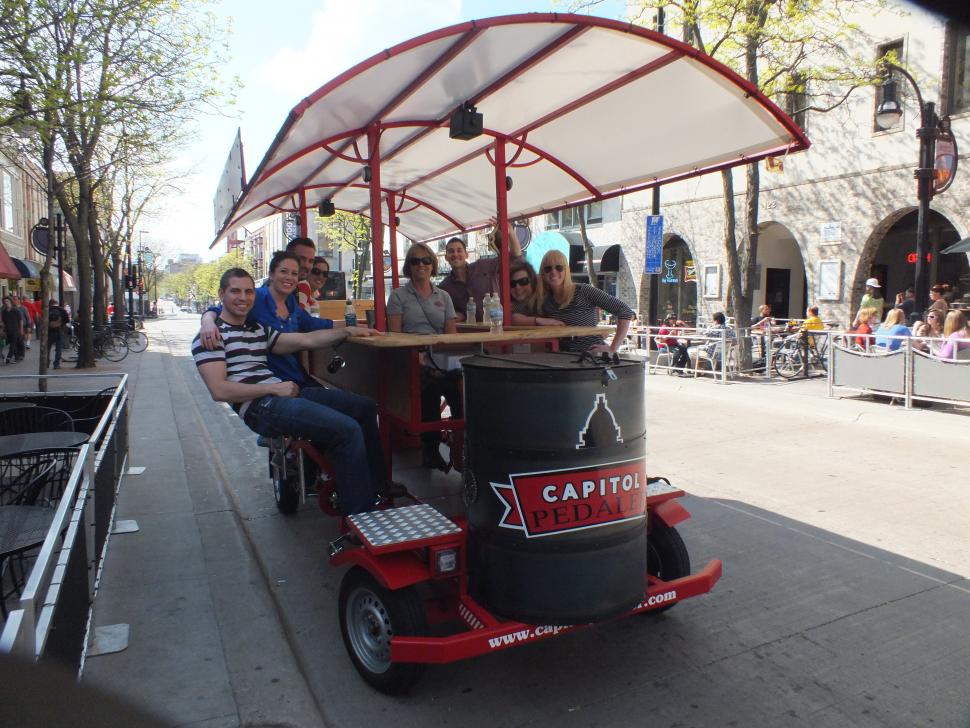 'Pedal pub' riders in Wisconsin get permission to have a beer

They’re known as pedal pubs and these 14-seat, four-wheeled, pedal-powered vehicles the size of a minibus are a common sight in the entertainment districts of some American cities. But in Wisconsin, home state of brewing giant Miller, passengers on pedal pubs have been unable to have a beer while travelling — until now.

With state capital Madison currently in the grip of winter (it’s -16°C there at the time of writing) there won’t be any pedal pubs celebrating New Year in a few hours, but when Madison’s ‘Capital Pedaler’ reopens on St Patrick’s Day to shuttle revellers round town, they will be able to bring their beer.

“It’s going to add to the fun,” Linda Besser, one of the owners of the Capitol Pedaler told the Wisconsin State Journal. “It’s such a novelty pedaling around Downtown. If you can have a drink, it adds to the novelty.”

But not everyone thinks beer and bikes should be mixed, even though the law requires a driver who remains sober and passengers will only be allowed to drink up to 36 fluid ounces, just under two UK pints, of beer they've brought themselves.

Local authorities can opt out of the state law and maintain the current soft-drinks-only rule. Madison Mayor Paul Soglin said he intends to introduce a proposal early next year to keep Madison’s pedal pubs ‘dry’.

He said: “My position is this: I believe that we should allow pedal pubs the opportunity to prove themselves in Madison.”

He said the Capitol Pedaler had been a model business. “I’ve known each of those women for years, and I think the world of them,” he said, referring to the company’s owners, Linda Besser and Sandy Theune.

Besser and Theune are both retired Madison police who started the business about three years ago. Besser said that business had doubled every year the since and she expects the change in the law allowing beer on board will bring another boost.

“We’re looking forward to being able to offer that,” she said.