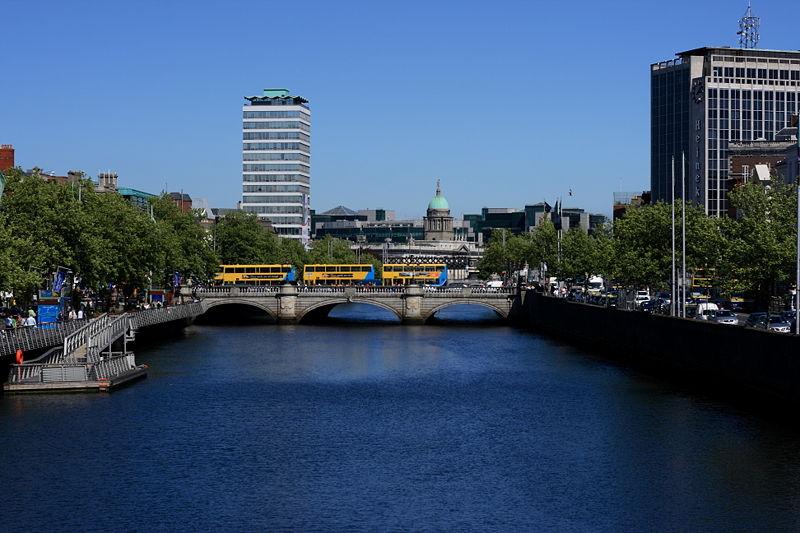 Dublin cyclists in campaign to save bus gate

Cyclists in Dublin have launched a campaign to keep a controversial city centre bus gate open on a permanent basis due to its impact on commuting times and congestion in the city. Campaigners said traffic times had improved and had increased cycling numbers by 62 per cent.

The campaigners, including TCD Students' Union, the Dublin Cycling Campaign, and political representatives, also said that more people were walking through College Green than before the ban was introduced last July.

Previously, it took buses an average of 20 minutes to travel from O'Connell Street to Nassau Street, with journey times sometimes reaching 35 minutes. Now, it takes just 11 minutes, or 18 minutes in very heavy traffic. Cars are banned from using College Green from 7-10am and 4-7pm on Monday to Friday.

Retailers and city traders have threatened to take a High Court case against the ban, claiming it is responsible for a loss of trade but Dublin Bus said journey times on all routes have been cut since it began.

‘Keep our bus gate open' campaign spokesman Barra Roantree said in the Irish Independent that the bus gate was working and had increased cyclist numbers by 62pc: “The average speed of peak-hour traffic has more then doubled from 5kph to 13kph. Footfall around College Green has increased 6pc, which is good news for our local businesses.

"The bus gate has given us a cleaner, less congested, city which is good for commuters and good for business. We'll be putting pressure on Dublin City councillors to do the right thing and keep the bus gate open."

The bus gate’s future will be discussed today when councillors will meet city manager John Tierney over the traffic restrictions. Mr Tierney will then make a recommendation to the council on Monday night on the scheme.

Cycling is on the increase in the Irish city. Organisers of the popular Dublin bike hire scheme were caught short when 11,000 Dubliners applied for subscription cards to the scheme on its launch last month, but had only printed 5,000. The scheme has 450 bikes for hire, located at 40 stations around the city.

And a new €10m 7km cycle route linking Rathmines to Fairview Park will be introduced next year. The route will be largely off the road and segregated from traffic, and construction is due to begin in January and will be completed by the end of next year.