We bumped into current round-the-world record holder James Bowthorpe at the Cycle Show, and he'd brought his bike along for everyone to have a gander. In case you weren't aware it's a pretty special machine: a Santos Travelmaster 2.8 sporting a Gates Carbon belt drive and a Rohloff Speedhub. Riding the Santos, James knocked three weeks off Briton Mark Beaumont's time.

It's one thing to set off on an expedition like this on a standard machine, quite another to attempt it on a platform that's unproven in distance cycling. However, the belt performed pretty flawlessly throughout the trip, and one of the upshots of James' trip – backed up by plenty of hard work by MD Robbert Rutgrink at Santos HQ – is that Rohloff have now recognised Santos as an official supplier of Gates-driven Speedhub bikes. There were others on display at the show but using the belt without Rohloff's approval will invalidate the warranty on your hub should it go wrong. Not that they ever seem to. 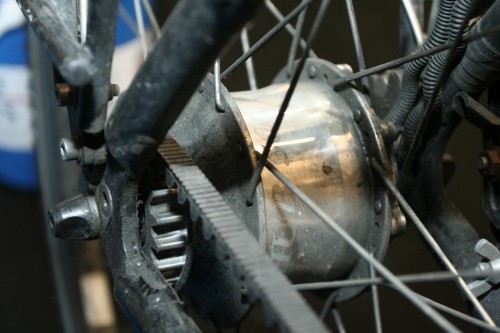 So what does a round-the-world record bike look like? Well, a bit dusty and with some odd-looking appendages, but the Travelmaster has seen off its 18,000 miles without major incident. The belt only needed to be changed once during the whole trip, in Perth, and James was really happy with the performance of the drivetrain. The 14-speed Rohloff hub gives a gearing range equivalent to a triple chainset – over 500% – and it doesn't require any lubrication. Getting the belt properly aligned (it's much more critical than with a chain) and tensioned (it requires much more tension to work efficiently) are the main issues, but given that we're seeing plenty of the belts coming through onto production machines now it seems that many manufacturers, Santos included, think the benefits for certain applications outweigh the problems. 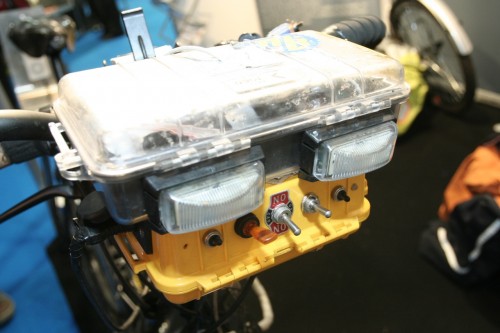 James ran a Schmidt dynamo hub into a home-made transformer mounted onto the bars. The transformer converts the AC power from the hub into DC to run the lights and charge electrical equipment including an iPod for those long days in the saddle. If it looks a bit Heath-Robinson then, well, it is. But it lasted the trip, which is more than can be said of James' right hand grip, which had to cope with 18,000 miles of twist shifting and as a result looks a little the worse for wear! 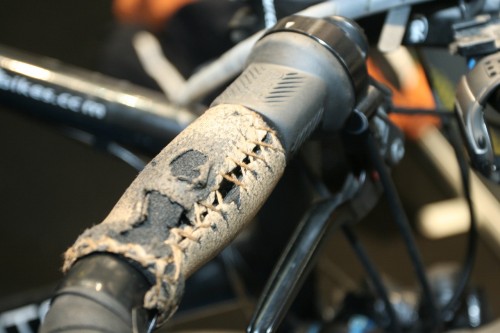 Other kit on the bike includes: Schwalbe Marathon XR tyes (which lasted 12,000 miles), a Brooks saddle, Magura Hydraulic rim brakes and a home-made rear rack platform that doubled as an iPod mount.