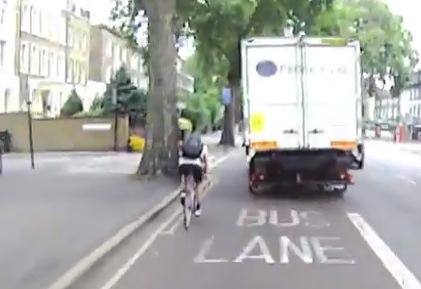 View from the cab: Lorry firm boss tells of effect of cyclist's death on the driver and the company (+ video)

With the issue of the safety of cyclists around lorries in the spotlight in recent weeks, a haulage industry magazine has spoken to the owner and a senior manager of a Wimbledon-based haulier, one of whose drivers was involved in a crash that claimed a cyclist’s life. Despite the company's commitment to cycle safety footage of one of its drivers passing close to cyclists and undertaking a car was reported recently to the Metropolitan Police.

The article, in Commercial Motor magazine, focuses on the death of 22-year old cyclist Eleanor Carey, known as Ellie, originally from Guernsey and who had moved to London to study an art foundation course.

She was killed at the junction of Tower Bridge Road and Abbey Street, Bermondsey, in December 2011 when she was hit by a left-turning lorry belonging to ELB Partners.

It talks about the effect of the fatality on the driver involved and the staff at the firm, which outlines the safety features it has fitted to its lorries since then, and also outlines what the business saw as biased reporting in the media and commentary on social media.

The company points out that its drivers are all required to undergo Transport for London’s safe urban driving course.

But a video uploaded to YouTube less than two months ago shows one of its vehicles being driven dangerously close to cyclists as it passes them, illegally entering a bus lane then undertaking a car.

Carlton Reid, writing on BikeBiz, reports that Chris Druce, deputy news editor at Road Transport Media which publishes Commercial Motor and Motor Transport magazines said on Twitter: "I'll send this [the video] on to the firm. They will genuinely be interested in seeing it."

But Evo Lucas, the cyclist who posted the video to YouTube, told Druce that the firm had already had it drawn to their attention by the Metropolitan Police.

In the Commercial Motor article, the ELB Partners’ managing director, Peter Eason, recalls hearing about the fatal incident, which happened on the morning of Friday 2 December 2011 and involved one of the company’s trucks being driven by David Johnson, aged 31 at the time.

“Johnson was in a terrible state,” Eason recalled. “He was in tears and screaming, ‘I’ve just killed a girl’.

‘He didn’t actually know he’d done it when he had the accident. He thought he’d clipped the curb [sic] and pulled a wheel arch off.

“So he pulled over to inspect the vehicle and some chap came running up to him and said ‘you’ve just run over a cyclist.’”

By the time the coroner’s inquest into Ellie’s death took place in May this year, the driver had died from stomach cancer.

ELB Partners transport manager Mark Norman told Commercial Motor that following the fatal crash, the company had paid for Johnson to undergo counselling, but he left it at the end of February.

Two months later, he was diagnosed with stomach cancer, dying six months later, and Norman said: “Clearly the stress he was going through played a massive part in this.”

Eason took exception with what he saw were ill-informed comments on social media at the time, saying: “You can’t stop it, but you just don’t need people painting an even blacker image of haulage than already exists.”

He wrote to Mayor of London Boris Johnson, saying, “enough is enough,” adding, “the media was relentless. ELB Partners were written about in newspapers and on social websites. These reports were totally misleading, and this is often the trend.”

The mayor replied that he too was concerned about the “damaging nature of media coverage both in terms of the impact this can have on those involved and in discouraging people from cycling.”

Eason told Commercial Motor that in the aftermath of Ellie’s death, he considered walking away from the business.

“I was absolutely distraught,” he said. ‘She was 22, the same age as my daughters. It’s your worst nightmare. I can’t explain it.”

Following the inquest, which established the cause of Ellie’s death as a road traffic collision – there is a comprehensive report on the London Cycling Campaign’s website – Eason promised Ellie’s father he would do all he could to improve the safety of his lorries when it came to cyclists.

According to ELB Partners, safety measures introduced by the firm to its 30 HGVs include CCTV, side bars, warning stickers and top-specification blind spot mirrors, while audible warnings stating “caution truck turning left” are also being rolled out across the fleet.

“None of this is mandatory,” said Eason, but I believe cameras should be.”

He also told the magazine: “I’m not against cyclists, I am a cyclist myself as well as a motorcyclist and we have to learn to live together. However, training would be top of my list for cyclists.”

But he insisted some riders put themselves in danger, saying: “I can’t believe the risks cyclists take.

“I was pulling away at a junction at the bottom of Park Lane the other day and a cyclist has come up the side of me, gone straight through the red light and he’s grabbed hold of the curtain of the lorry that was already going around.

“So he’s being pulled around by the curtain next to the wheels of the truck. It’s just crazy.”

He urged that cyclists be required to undertake training, and said he didn’t think a ban on lorries being driven in London at rush hour would work.

“Some groups are calling for lorries to be banned in London at certain hours,” he explained.

“I know that’s what they do in Paris. It won’t work here as the delivery points will not remain open overnight. We found that during the Olympics.

“We tried to switch some of our day deliveries to night delivers [sic] and no one wanted to know.

“Some of the ideas being bandied about are absolute lunacy,” he added. “We need a clear direction of how to move forward, because the incident could have happened to any one of us.”

Since Ellie, who had undertaken voluntary charitable work overseas, died a Guernsey-based foundation has been set up in her name, and earlier this year delivered its first consignment of refurbished bikes to Africa.

Besides the article on her death, the current issue of Commercial Motor also covers the Mayor of London’s Safer Lorry Charge, how Asda is training its drivers to share the road safely with cyclists, as well as shadow transport secretary Mary Creagh’s recently announced HGV Safety Charter.

An editorial on that topic is headed “Vote Labour and pay over £2k,” a reference to the estimated cost per lorry to fit the safety equipment the Labour Party wants to see on HGVs.

The magazine's website also has a 'Trucking Britain' poll, with the main focus on cyclists.

Do you feel the national and local media is biased against trucks in its reporting of accidents involving trucks and cyclists?

Do you feel the government is right to promote cycling without appropriate safeguards in place? For example compulsory training for cyclists, physical segregation of cyclists from other road users.

Do you send your drivers on vulnerable road user awareness training?

Which of the following methods should be used to reduce risks for cyclists on roads?

- Physical segregation of cyclists from other road users

- No methods required to reduce risks for cyclists on roads