We had the third tier Cube Litening Super HPC Race in for test earlier this year, and this top-end model shares the same 860g frame (for a size 56). Cube use what they like to call Advanced Twin Mold Technology to create the frame, which amounts to using an internal form in the layup process to help perfectly align the carbon and reduce unnecessary material. Like most manufacturers, they don't give too much detail away with regards the actual construction of the frame. 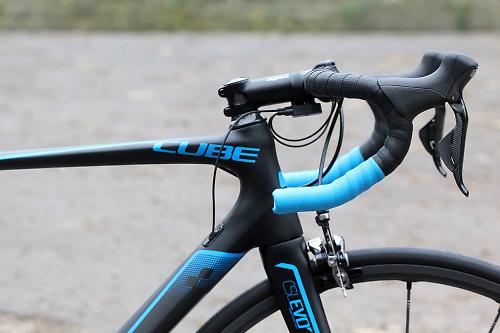 We do know high modulus carbon fibre is used thoughout, and further weight savings have been achieved with moulded carbon headset cups and a press-fit bottom bracket, removing some of the aluminium hardware a frame from a few years ago would have been fitted with. The frame is well proportioned, with the necessary oversize tube profiles in key places that have become standard on road race frames in recent years. It looks great in this finish, a matte black background overlaid with colourful pinstripe decals tracing the contours of the frame. It even had the designer in the office stroking his chin in agreement. 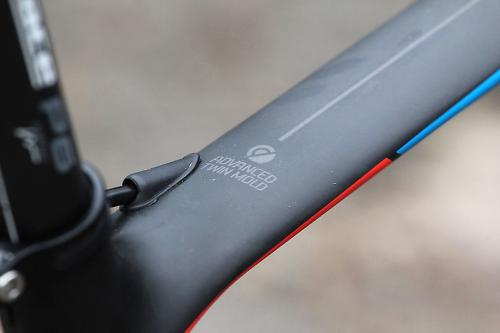 There’s a pleasing simplicity of tube profiles, with very few gratuitous bulges or unnecessary curves, just some subtle profiling in key places. The top tube is flattened where it meets the seat tube, containing a 27.2mm seatpost. That, along with the slender seat stays, seat tube and top tube, point to a frame that should deliver a comfortable ride.

Plugged into the tapered head tube (1 1/8" to 1 1/2" bearings) is Cube’s own CSL EVO Vollcarbon fork. It’s a full carbon design, including the steerer tube. The internal routing for the Shimano Di2 wiring has been neatly done, both derailleur wires entering the top of the down tube. Each bike in the Litening range uses the Multi Purpose Hanger, which has a large exit hole at the top for easy routing. The rear brake cable meanwhile passes through the top tube. Being the top-end model in their range, the bike is packing some top draw components worth of the price tag. Shimano’s Dura-Ace Di2 11-speed groupset needs no introduction with a compact 50/34 chainset. You would typically expect a bike with such race intentions to be fitted with a double 53/39 chainset, but there you go. Shimano’s press-fit 91 bottom bracket is used. It has a 91mm shell so allows the down tube to be properly wide and the chainstays oversized too. The battery for the Di2 groupset is mounted on the underside of the bottom bracket shell. Most manufacturers typically prefer the non-driveside chainstay, and many are starting to switch to Shimano’s newer internal seatpost battery for cleaner lines. Needless to say, it’s tidily packaged out of the way and Shimano’s Di2 groupset has proved rock solid in the rain so its position isn’t a problem, if you’re worried about front wheel spray. 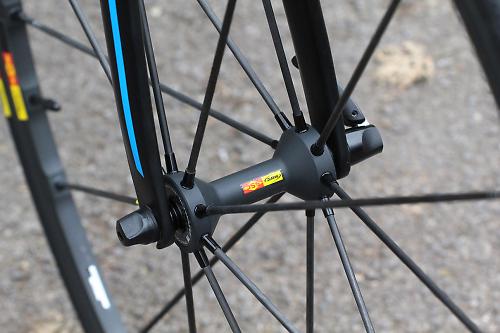 Rolling stock is a pair of Mavic R-Sys SLR C wheels. They’ve been around for a good few years now but we don’t see many manufacturers speccing them, well certainly not on any of the bikes passing through the road.cc office anyway. At just 1,295g for the pair, they’re extremely light - you can see why Cube have fitted them. The wheels feature hollow carbon fibre spokes and rims with ISM 3D machining to remove excess metal, and the Exalith 2 braking surface provides reliable braking performance in all conditions. Fitted to the wheels are Mavic’s own Yksion and GripLink tyres in 23mm width. There are no shortcomings with the finishing kit. Syntace supply the Racelite CDR Carbon handlebar wrapped with Cube’s own two-tone bar tape. A Syntace F109 stem and  P6 Carbon RaceFlex along with a Fi`zi:k Antares Carbon complete the build.

Cube bikes measure up small. This is a 56 size bike but it has a 54.5cm horizontal top tube, short compared to most other frames of the same size. The head tube is short too at 14.5cm. The 58 in the range looks to have the typical proportions of a 56cm bike, with a 56cm horizontal top tube and 16.5cm head tube. So if you normally ride a 56, you probably want the 58 from Cube.

For the purposes of comparison, the Merida Scultura SL comes closest in terms of price and weight though we can’t comment on performance until we’ve been out on the road on the Cube.