Reigning Tour de France champ, Tadej Pogacar, has some shiny new wheels for this year's race. Here are our initial thoughts on this ultra upgrade
by Liam Cahill

If you want to drop the best part of three grand on a wheelset then Campagnolo will exchange it for a set of its new Bora Ultra WTO wheels. I’ve got the 45mm version here so why don’t we take a look at what makes them so damn expensive and give you my first thoughts.

So, the Campagnolo Bora Ultra WTO 45s weigh in at just 1420g, are 45mm deep and they are very very stiff (WTO stands for wind tunnel optimised btw, but more on that later). As you might be able to deduce from that little summary, they are also bloody fast and my first few rides have shown me how well they do when you point them at some hilly terrain.

Okay, on the flats they’re not the fastest - a deeper wheel will still roll along at speed for a bit less effort. They still pick up a bit more wind than a shallow wheel and I wasn’t overly surprised with how these wheels ride.

That’s not a negative as such. I was expecting the Boras to be brilliant, and they are. You combine that relatively low weight, the rim shape that is aero optimised for the 25mm tyre that I have installed and the top-end stiffness and you have a wheelset that feels so energetic. You really can whip the bike up to speed and I haven’t really been able to climb at a steady pace.

The Bora Ultras make it fun to accelerate and yes, I have absolutely been pretending to be Pogacar with these wheels. I say it’s fun. I have been landing myself in a sea of lactic acid with a sprinkling of oxygen debt on regular occasions.

When I’m not pretending to be the Tour de France champion, the wheels are just nice to ride. If you pop a lightweight and stiff wheelset on your bike then the handling is going to change and the bike will become far more chuckable.

The other side of that stiffness is quite a lot of feedback as to what the road is doing beneath you. Some say that’s ideal for getting right into the ride. I’d say that I don’t love being shaken to the bone so these are probably not the wheels to point at broken roads.

That said, tyre pressure and the actual tyre that you use will have a major bearing on comfort levels. You just need to know that these aren’t going to provide the floaty ride of a wider wheel.

As mentioned earlier WTO stands for wind tunnel optimised and Campagnolo says that the wheels are designed for 25mm tyres. How fast are they? We only saw data on a set of the 45s tested against a set of SwissSide wheels, so we can’t really say how they compare with the other top-end wheels on the market.

Tech - it’s all about the nipples… maybe 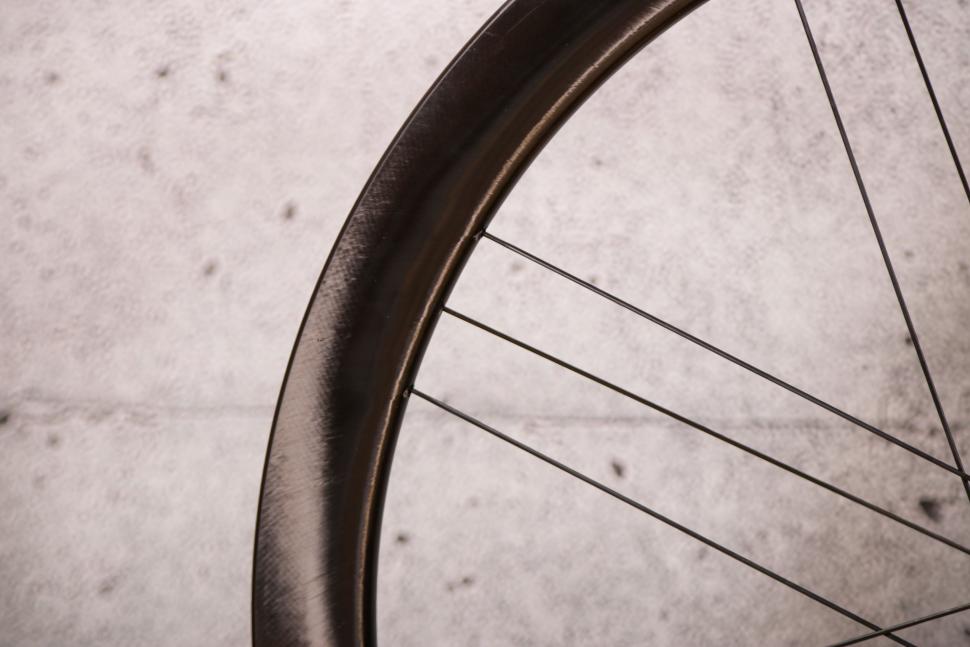 While many new wheelsets are a bit boring, to a tech nerd the Bora Ultra WTO have a few little features to make us pay attention. The one that jumped out at me as the most notable is the internal/external nipple situation that is happening here.

Campagnolo has created an internally housed nipple that it calls Aero Mo-Mag which can be adjusted externally.

The nipples sit in a dedicated nipple seat with the guide chamber sat inside the rim. This, Campagnolo says, despite being a bit of a production nightmare, has several structural benefits. Firstly, unlike a standard nipple, the Aero Mo-Mag system means that the nipple lines up perfectly with the line of the spoke because each of the seats is shaped perfectly for the spoke that it is paired with. This also reduces the bending stress on the spoke.

The system also ensures that the nipple does not dig into the carbon around the spoke holes which, incidentally, are created during the layup process rather than drilled. The lack of contact with the carbon is better for longevity, Campagnolo claims, and it also says that the nipple seat provides electric insulation to reduce corrosion at the nipple.

Now Campagnolo makes some noises about the setup being more aero though no data is provided for this. What we know for certain about internal nipples is that they can be a nightmare to work on. For tube-type clincher systems as I have here, it’s a simple case of popping off the tyre and tube to adjust, but for tubular and tubeless tyres, you’d need to uninstall the whole tyre system each time a slight wheel true was required.

That might not be a regular problem mind but there’s also the fact of the holeless rim bed to consider as this removes access to an internal nipple. The benefit of the Aero Mo-Mag system, Campagnolo claims, is that truing work can be done without the need to remove the tyre. 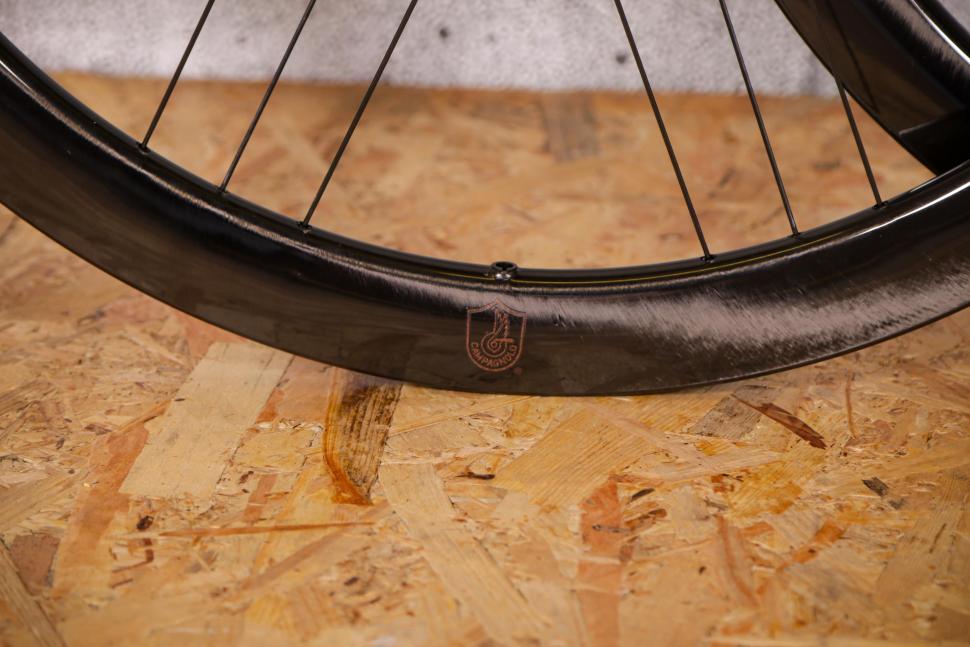 What makes the Bora Ultra WTO wheels stand out a little bit is the rim finish which I think is absolutely beautiful. It might not look amazing on camera but honestly, in the sunlight, it is a shimmering piece of art. The black on black logos aren’t in your face and then there is the glittery bronze ‘Ultra’. These really do look a bit special.

The reason that they look like this is in the way the carbon is finished. Campagnolo has created a new C-Lux - that’s Campagnolo-Luxury - finish that they say “is so pristinely smooth that it doesn’t require lacquer.”

C-Lux is, essentially, an additional quality control step where Campagnolo checks for the absence of aesthetic defects that would usually be simply covered by the lacquer. That means that out of the mould, the rims are as you see them.

These checks also have an effect on the rim bed with Campagnolo saying that the bead hooks are also less abrasive to the tyre bead.

While we’re at the rim bed, it’s worth mentioning that Campagnolo sticks to the 2-Way Fit system that it has used for several years. These wheels are tubeless-ready and thanks to the lack of spoke holes in the rim bed, you don’t need tubeless tape.

I’ve set up a few of these wheels tubeless in the past and it is usually an easy process. I didn’t have any tubeless tyres to use on these wheels but I promise that before I write my full review I’ll be sticking a set on.

The new Ultra WTO wheels come with a new set of disc-specific hubs. The first major change is also the most noticeable with the front hub body now being made partially from carbon fibre. This includes an integrated radial flange and with the sparkly bronze logo, they look absolutely beautiful.

Inside the hubs you get Campagnolo’s CULT hybrid ceramic bearings. The races are treated steel and there’s adjustable preload, all of which Campagnolo claims, produces about five and a half times less friction that your standard steel bearing.

I’ve used the CULT bearings on a few wheelsets now. They do spin beautifully and I have to say that they seem to last incredibly well too. 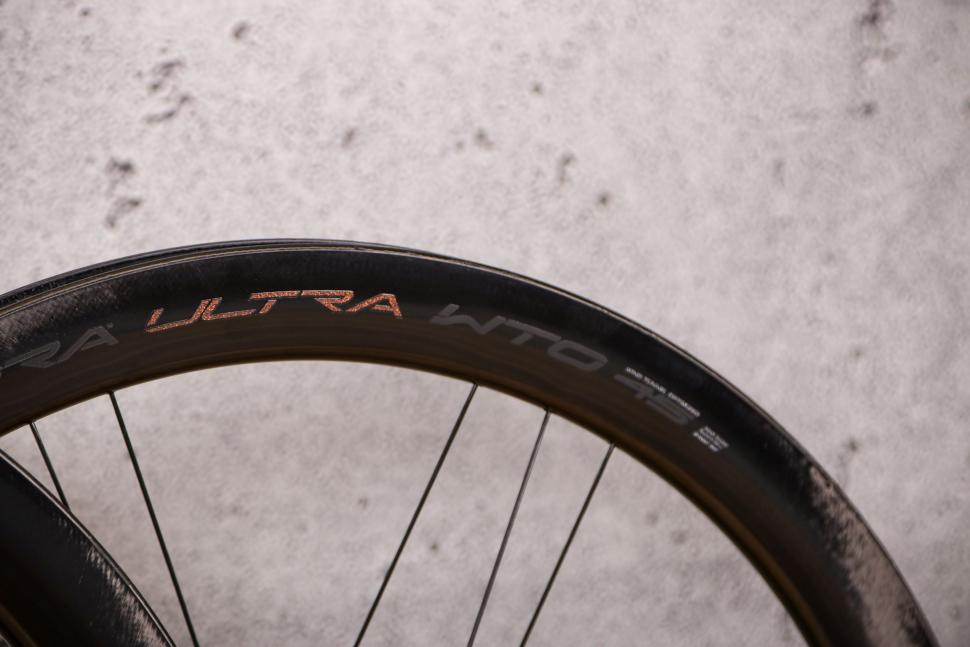 And then we get to the subject of price. At £2,800 they are one of the most premium offerings on the market, though still not the most that you can spend on a set of hoops. Your money is going on the clever MoMag nipple system and the fancy way that Campagnolo has finished the rims and front hub.

I’d actually argue that there’s very little point in me even talking about the price as anyone that is seriously considering these wheels isn’t going to be short on the money front. The fact is, though, you can get an exceptional wheel for a fraction of the price.

So why would you buy these wheels? I’d suggest that a lot of it will come down to wanting something a little bit more special than the other bikes on the club run. That they are. Are they a representation of diminishing returns? Absolutely. Can you get most of the performance with a set of the standard WTO wheels? Yes. You could arguably get most of the performance with a wheelset at less than half the price. But that, I think, isn’t really the point of these wheels. They are deserving of the Ultra name. Campagnolo didn’t need to do the internal/external nipple thing. But they did. The same goes for the C-Lux finish.

Those are my initial impressions. The full review will be up soon so keep an eye out for that.