What earned this gravel bike the Editor's Choice award? Find out here.
by Liam Cahill

This article includes paid promotion on behalf of Giant

This is the Giant Revolt 0 and at £1,799 it’s a great value gravel bike that’s been awarded our Editor’s Choice award. It’s the most expensive of the three aluminium Revolt bikes in Giant’s range, with the Revolt 1 coming in at £1,499 and the Revolt 2 at £1,199. Above that there’s the carbon Revolt Advanced which starts at £2,199,  and the Advanced Pro range goes all the way up to nearly five grand.

So in terms of its place in Giant’s range - and in the overall gravel market - this isn’t an especially expensive bike. But it’s got a lot going for it. We’ve found that for the money you get impressive performance from the Revolt 0, and it’s also a very versatile bike that’ll turn its hand to commuting and road riding too.

The frame is quite compact with plenty of standover height, and that makes it nice and chuckable when things get narrow and technical. The stack-to-reach ratio of this L frame is 1.54, which is more or less spot-on for a bike that’s designed to be doing a bit of everything. The geometry is loosely based on endurance road bikes, but with slacker angles and a longer wheelbase for extra stability, and it’s great fun off-road.

If you chucked some slicker tyres on it you’d have a pretty handy winter road bike or commuting bike too. Giant do some specific mudguards for the Revolt or you could opt for a set of quick release guards like the SKS Speedrockers.

Comfort is pretty decent, but you can detect the difference between this and more expensive bikes in terms of suppleness. There’s a fair amount of feedback through the contact points on hard surfaces, even with the tyres at low pressures. You spend more on a carbon or a titanium frame and you get something that’s a bit more supple and forgiving, but for an alloy bike, it’s pretty good. One thing that helps is the seat post. 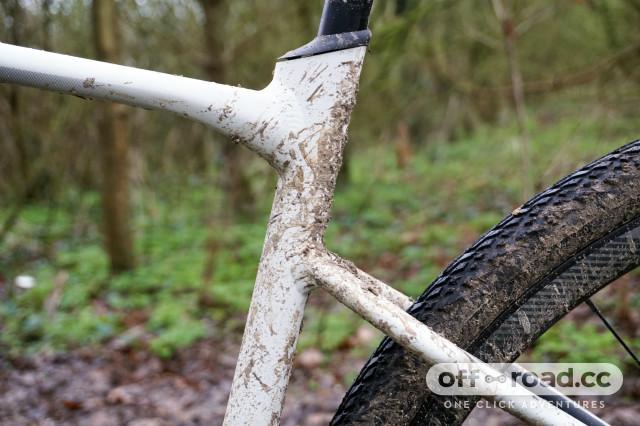 Giant has used their D-FUSE seat post in this bike, it has a sort of D profile with a flattened edge at the rear here. Giant says that it’s more compliant than a round section seat post and I’d say that it does make a difference. It’s an alloy post on this bike and it’s a bit less effective than the carbon ones that the more expensive models get, but it’s still making a bit of difference. There’s a D-FUSE handlebar too, which has a nice swept-back top position that’s really comfy for cruising and climbing.

There are some things you could do to improve comfort levels. The tyres are pretty sturdy and although they’re good enough all-rounders, a switch to something a bit more supple would help. 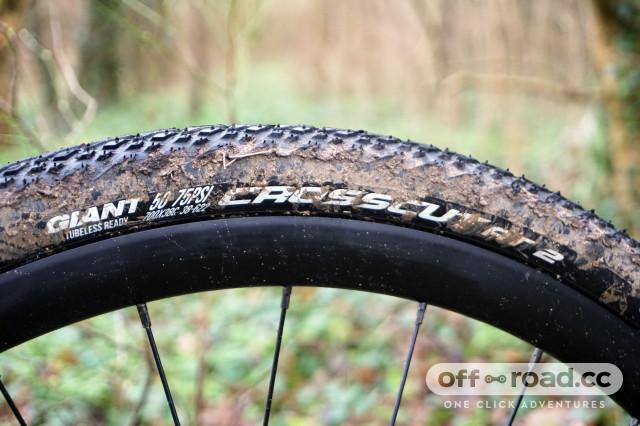 So the Revolt 0 comes with Giant’s Crosscut AT2 tubeless tyres. They’re 38mm wide, and they’re matched with Giant’s S-X2 alloy wheelset. They come set up tubeless, which is one less thing to have to do further down the line, you just have to add the sealant once you’ve got the bike home.

They’re fine on gravel but they’re not really designed for mud, so not really a winter choice for off-roading. You can get up to a 45mm tyre in the frame so there are plenty of options if you wanted to swap them out for something more aggressive. You could always upgrade to a carbon handlebar down the line too if you wanted, that would help with comfort at the front. Or even just some thicker bar tape.

We were surprised about how well the Revolt climbs, especially given that it’s not overly light at just over 10kg. It feels really lively off-road, it’s a lot of fun. 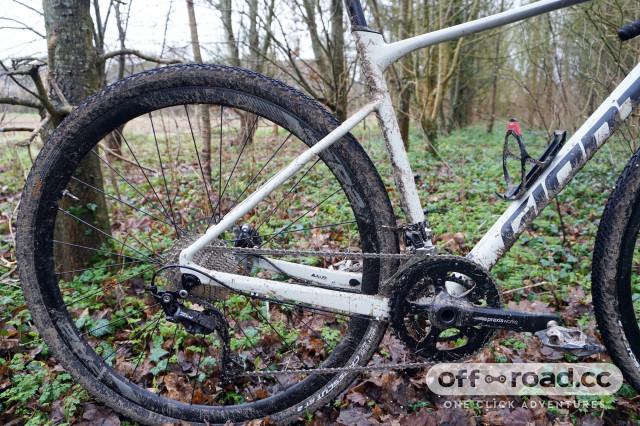 Transmission-wise, you’re getting a mix of mostly Shimano kit here. The chainset is a Praxis Alba sub-compact with 48/32 chainrings and at the back, there’s an 11-34 cassette so that should give you a very good range of gears 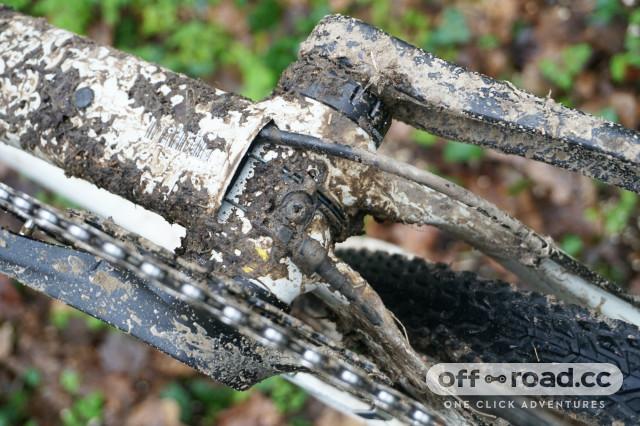 It’s nice to see an external bottom bracket on a bike like this because it’ll see some grit and grime and it’s easy to swap out when needed.

The Editor's Choice award means that it’s a great choice of performance and value, and that sums up this bike really well. For £1,600 you’re getting a really good frame and fork that’s well built up with quality components for the money. We were pleasantly surprised by the level of performance, especially off-road: this is a fun bike that’s very much at home on the gravel and can easily cope with more technical terrain too, especially if you slap on a more aggressive set of tyres.

For winter riding or commuting it’s a great option too. It’s a dependable bike for all different kinds of riding.