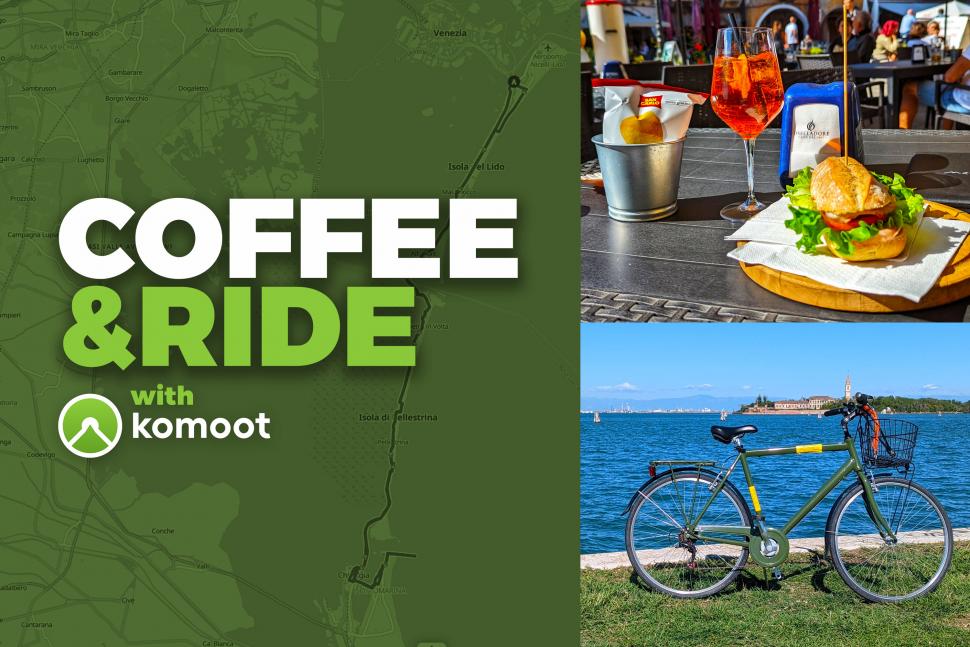 Venice isn’t the first place that springs to mind for bike ride destinations – indeed, unless you’re a toddler on a balance bike, you risk a hefty fine for doing so in the six sestrieri that make up the heart of the city beyond which 99 per cent of visitors never venture (something that hopefully, these lost-looking cycle-tourists on the Ponte dell’Accademia avoided). 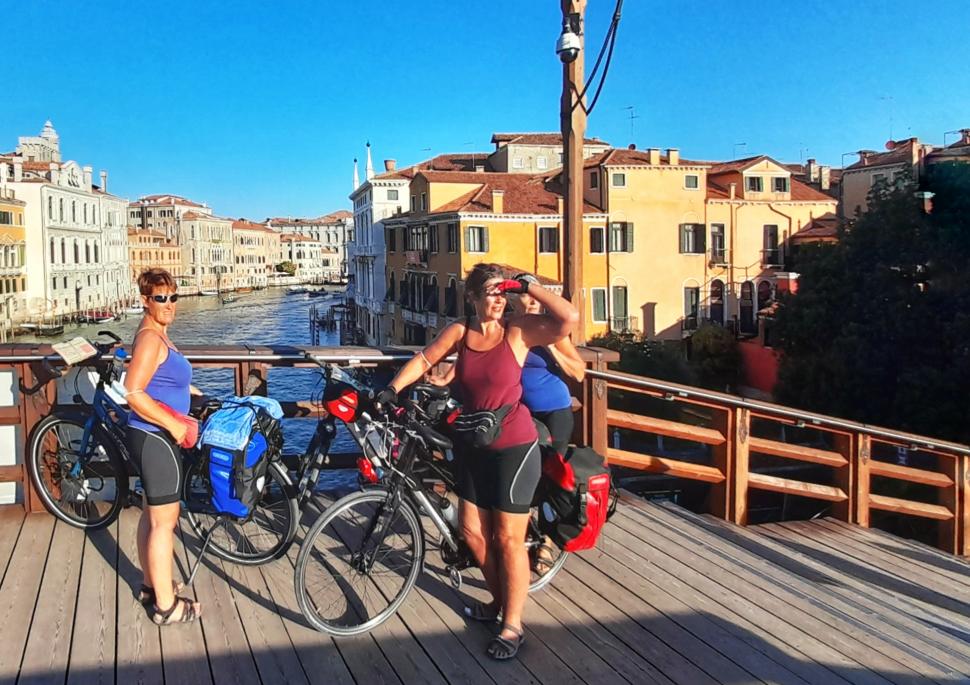 But that’s where we are for our latest Coffee & ride with komoot feature – though maybe on this occasion, it is better named Aperol Spritz & ride with komoot. In my defence, I was on holiday, and it probably counts as a recovery drink, though one of course that should be drunk in moderation. Ahem.

Take a vaporetto across the Lagoon to the Lido – home of the Venice Film Festival and some terrific beaches – and you’ll find part of Eurovelo route E5 that with the help of a couple of ferries and a hired bike lets you ride down to Chioggia on the mainland and back, easily done in a day.

As a regular visitor to La Serenissima over the past three decades, using the means – in Italian, il mezzo – of a bicycle to explore the farther flung reaches of the city provided a strong motivo to do exactly that, and being there alone for a few days last September with glorious weather to boot gave me all the opportunità I needed. 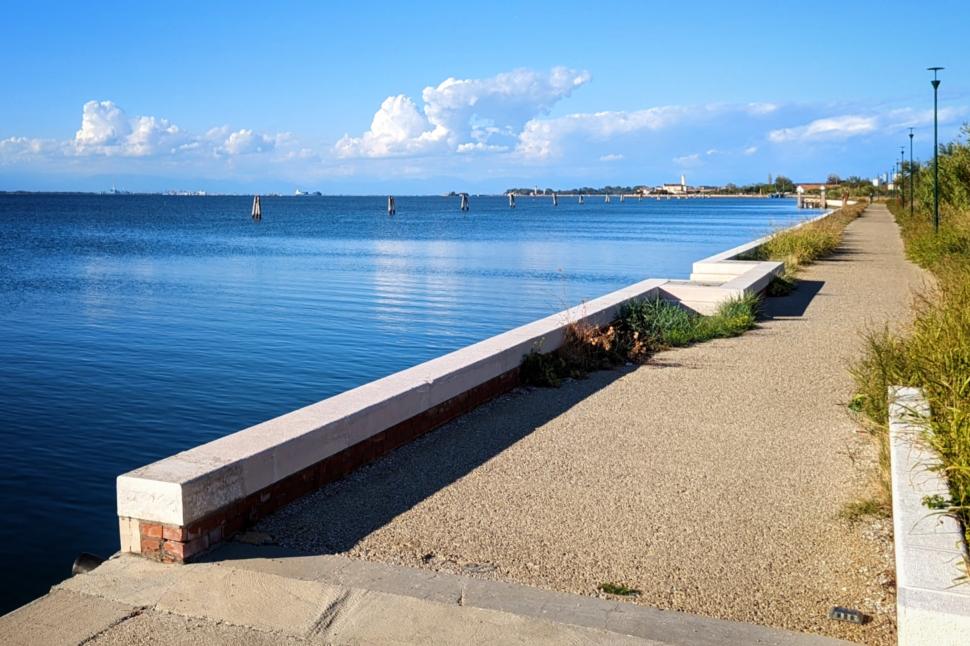 So, armed with a 24-hour ACTV travel pass (€25), I headed to the Zattere vaporetto stop with a mixture of excitement and trepidation – would I find a bike to hire once I got to the Lido, and could I do the round-trip to Chioggia in time to return it?

I needn’t have worried. After a quick cappuccino waiting for the hire shop to open, I had my bike for the day – less than €10 – and off I went, heading south down the pair of slender islands that would take me to the midpoint of my ride, where I would turn back. 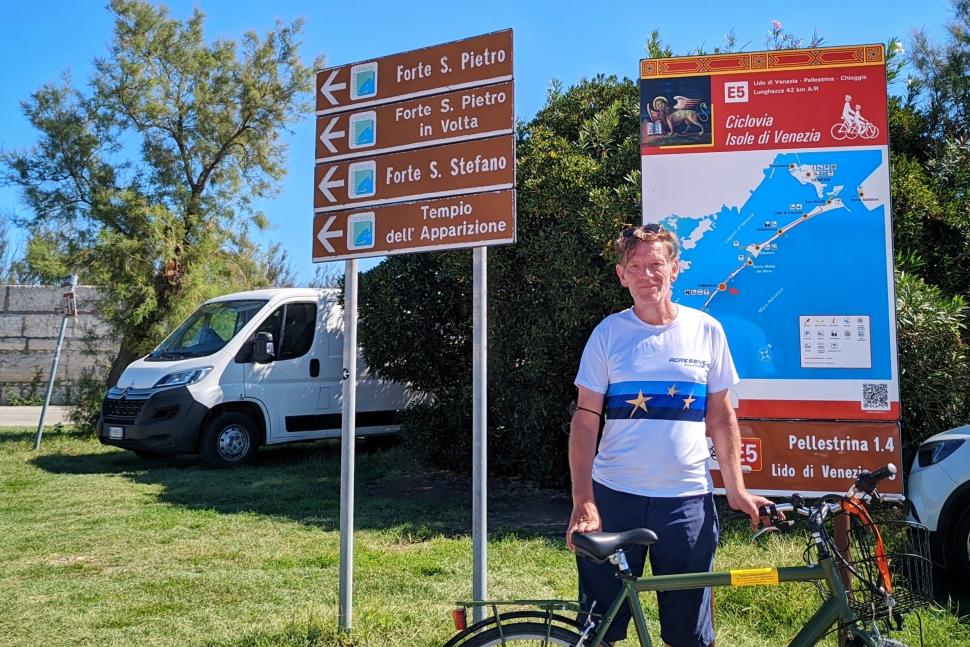 One thing I did not expect, though, was that within half an hour of setting off, I’d receive the closest close pass from a driver I’d ever had – a centimetre or two from the handlebars, the kind that makes you stop for a few minutes, and makes you wonder whether the bike ride is worth it. 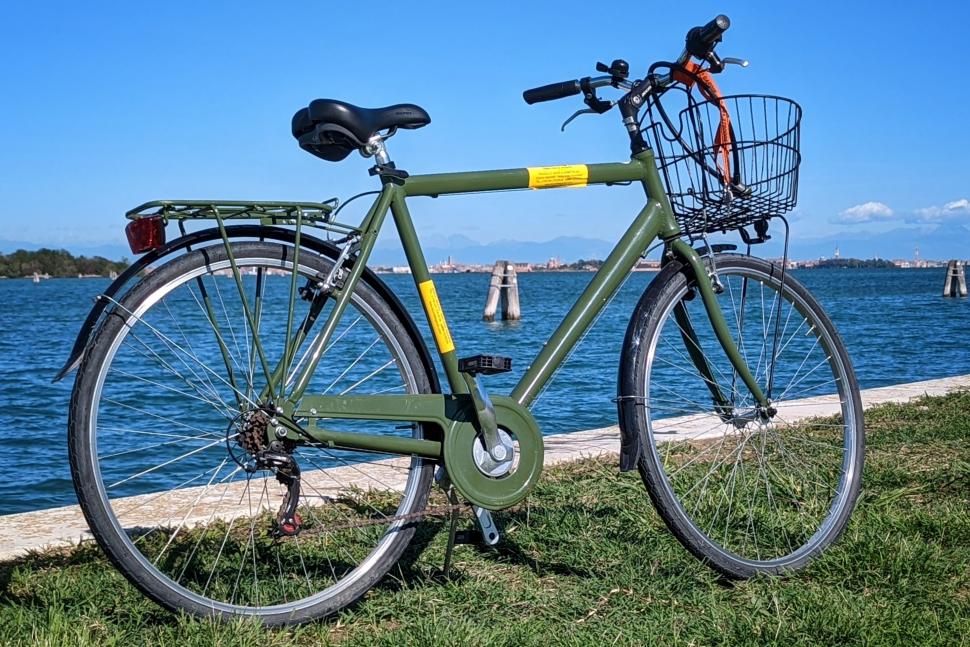 I’ve just finished reading a thriller called The Venetian Legacy by Philip Gwynne Jones, who lives in Venice, with the book mainly set on the Lido and Pellestrina.

Not only did it brought back vivid memories of that day cycling along the lagoon, but I also learnt that the bend in the road just after where the close pass happened is nicknamed la Curva della Morte – the Curve of Death – because of the number of fatal crashes there.

Had I known that at the time, it would have provided scant reassurance despite my narrow escape on that stretch of road, close to the ancient town of Malamocco, and which is a location that plays a key role in the plot of the novel.

Stopping briefly, gazing out over the Lagoon as I calmed down, I resolved not to let it ruin my day, got back on the bike and cracked on, albeit initially taking the narrow footpath along the lagoon. 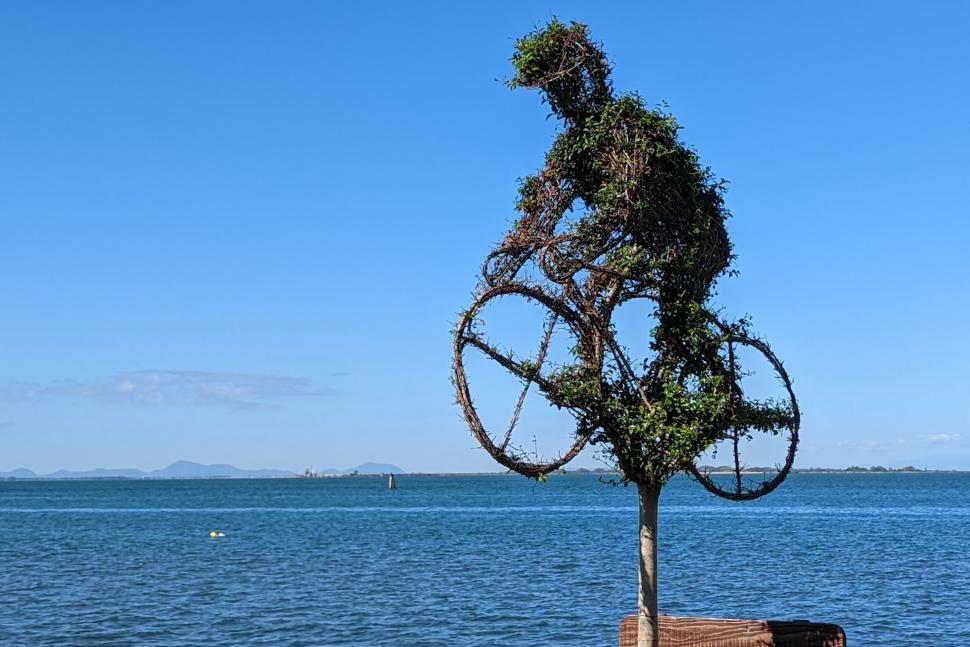 After another coffee at Alberoni, where I met a group of Dutch rollerbladers, their leader in a Bianchi jersey, I was at the ferry terminal for the short hop to Pellestrina, remembering to snap a picture on the phone of the timetable for the boat back – much less fuss than trying to navigate the website. In theory, you should be charged a nominal sum for taking a bike on the boats; in practice, it seldom happens. 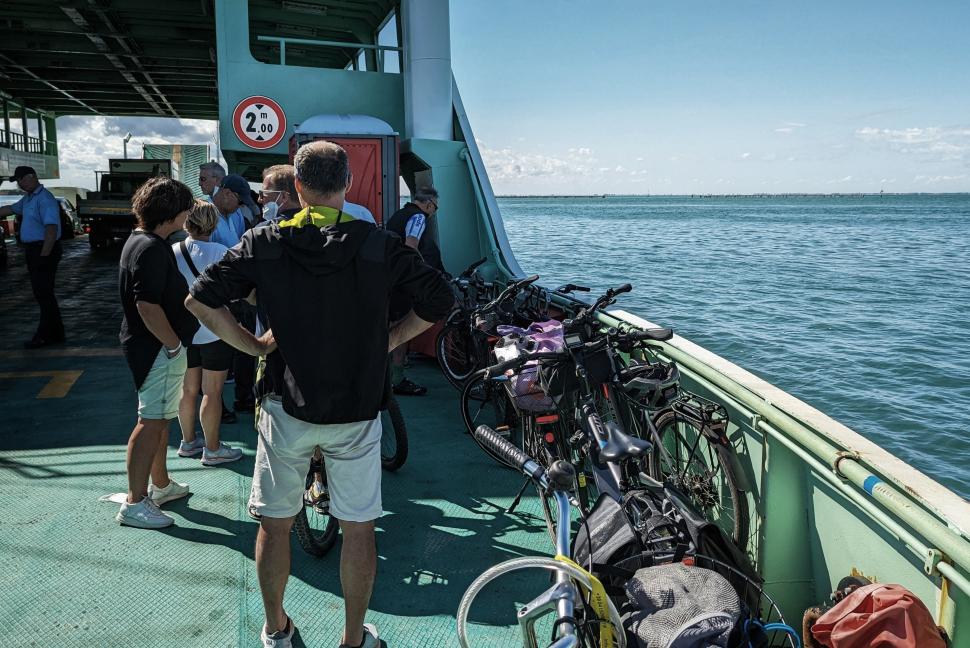 If the Lido island is thin, Pellestrina is thinner still, barely a couple of hundred metres along its entire length separating the lagoon from the Adriatic, the sea hidden by a massive flood-defence wall. 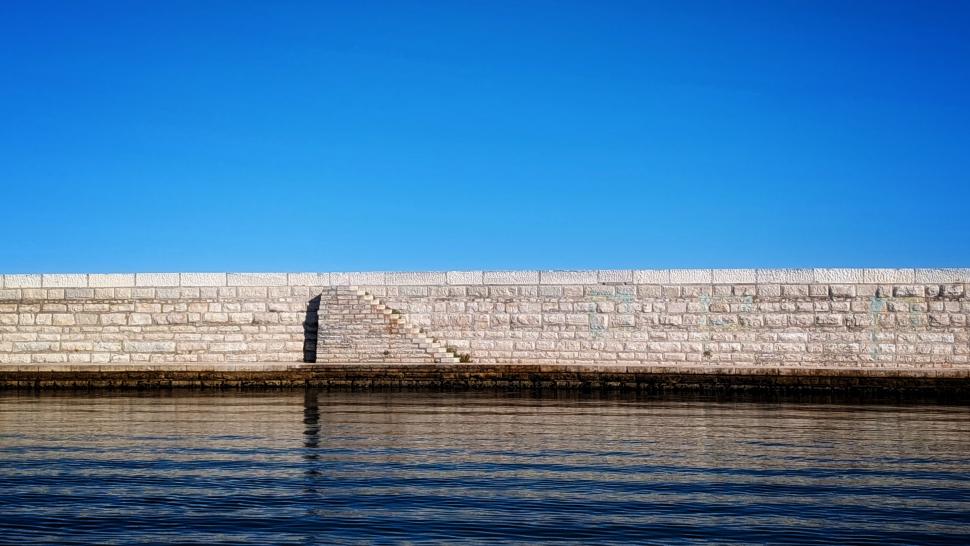 Following a dedicated bike path I came to the island’s main town, to my right row upon row of fishing boats, to my left the prettily painted houses characteristic of the island. 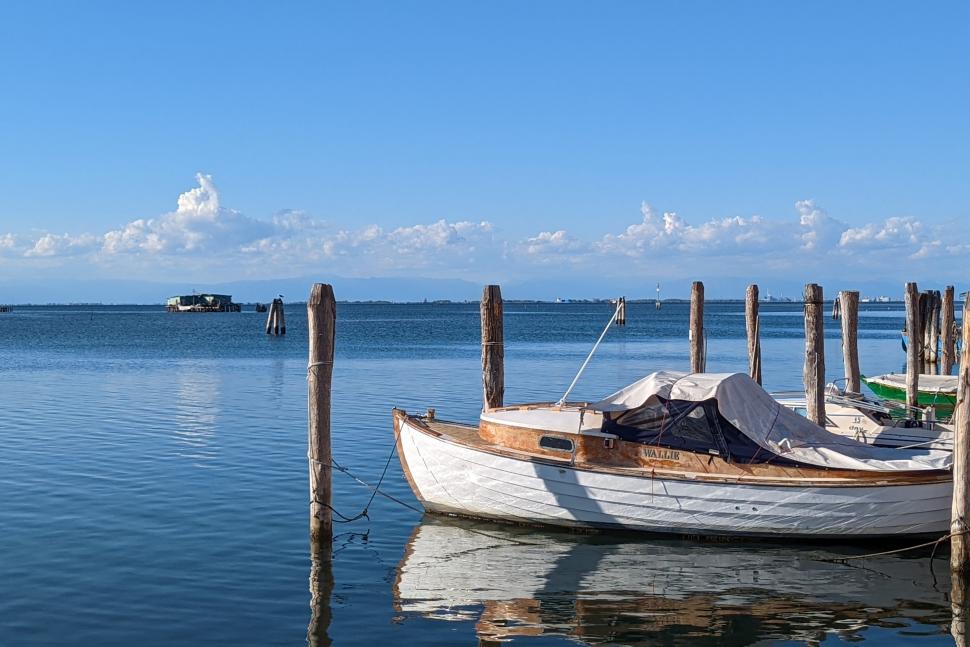 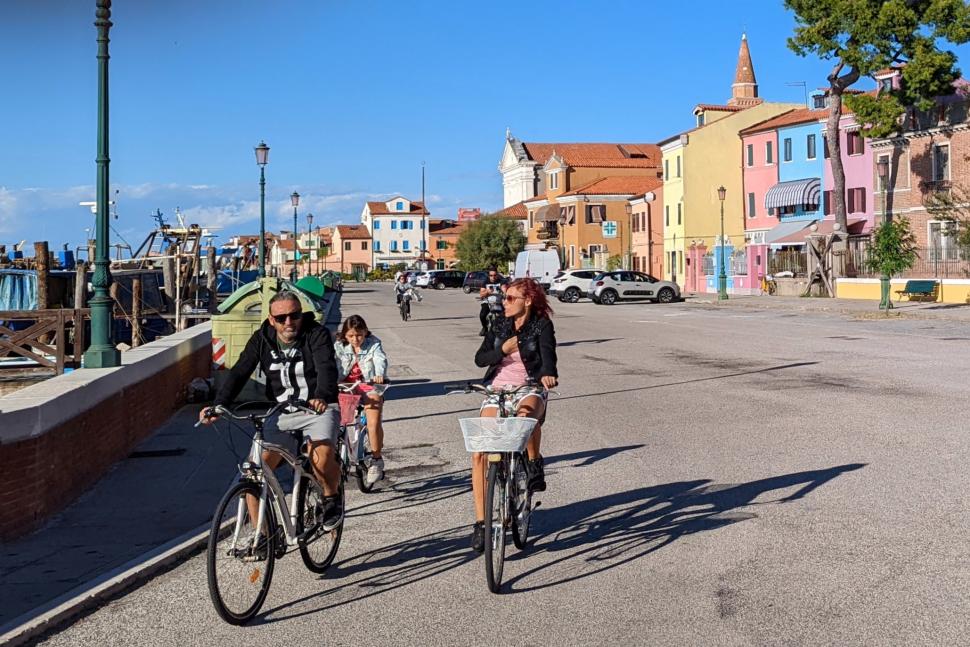 Coming to the bottom of the island, just before the cemetery, I found the vaporetto stop for the crossing to Chioggia. 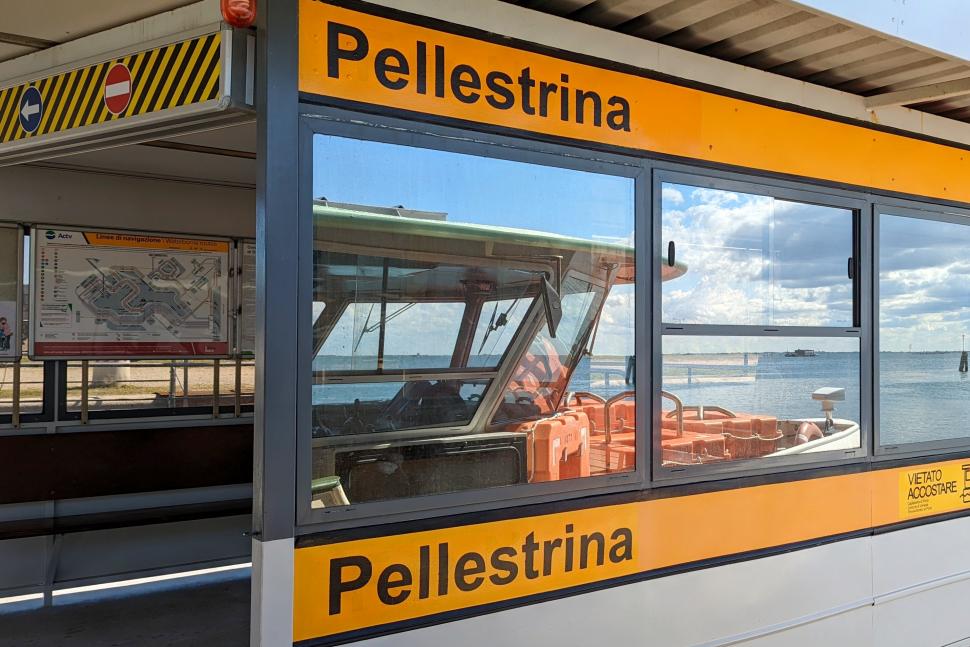 I was early for the boat. Luckily, there was a bar there and being after midday, and me on holiday, that made it Spritz o’clock. We all need isotonic drinks to help us through our bike rides, even flat ones on the coast, Sì? 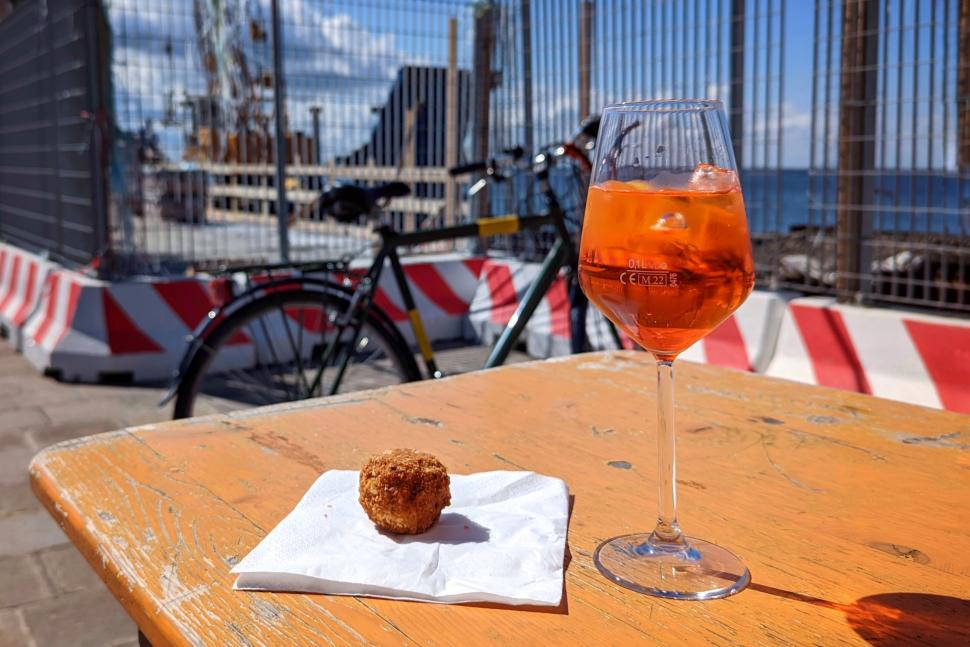 I found Chioggia a bit discombobulating. Approaching on the vaporetto, you are unmistakeably on Venetian territory, the footbridge over the canal you see as you near the stop the same as many back in Canareggio or San Polo. 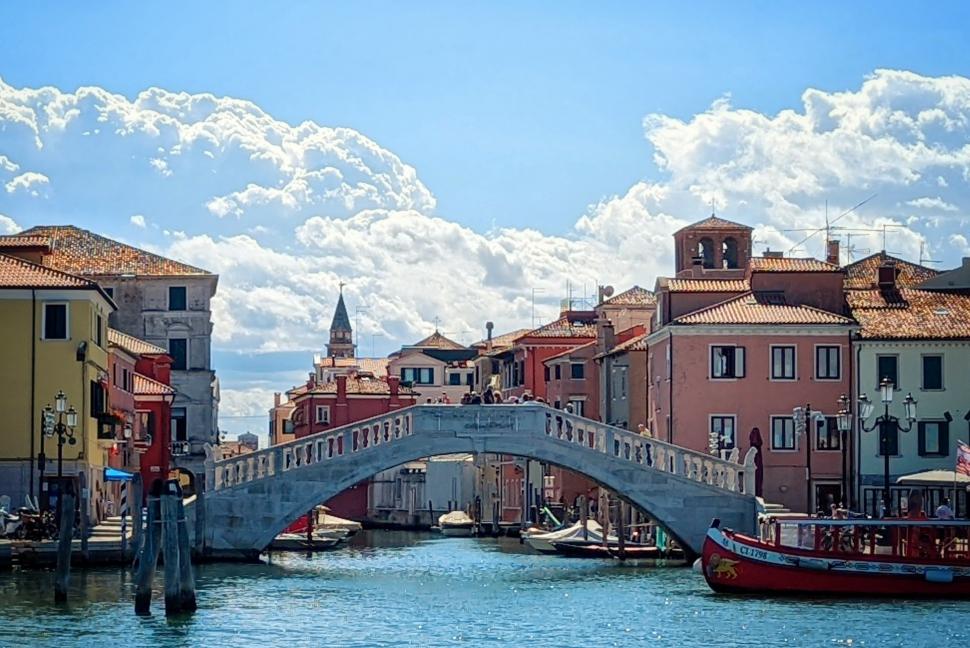 But once on terra firma, it became clear that what may once have been waterways had been paved over for what are now streets dedicated to the all-conquering car; an apocalyptic vision perhaps of the fate that may have befallen Venice had post-war British town planners been let loose on the city. 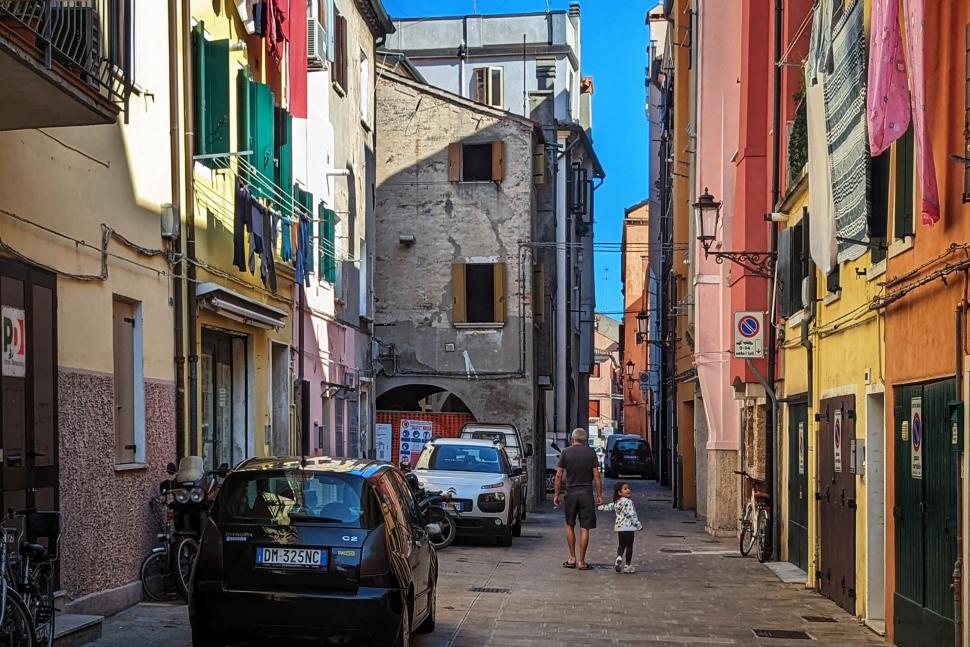 After a trip out to the lighthouse at the end of the causeway on the Adriatic, passing huge fishing huts on the way, and a delicious panino plus another Spritz (and doppio espresso afterwards) at Crema & Ciocciolato on Corso del Popolo, it was time to head back. 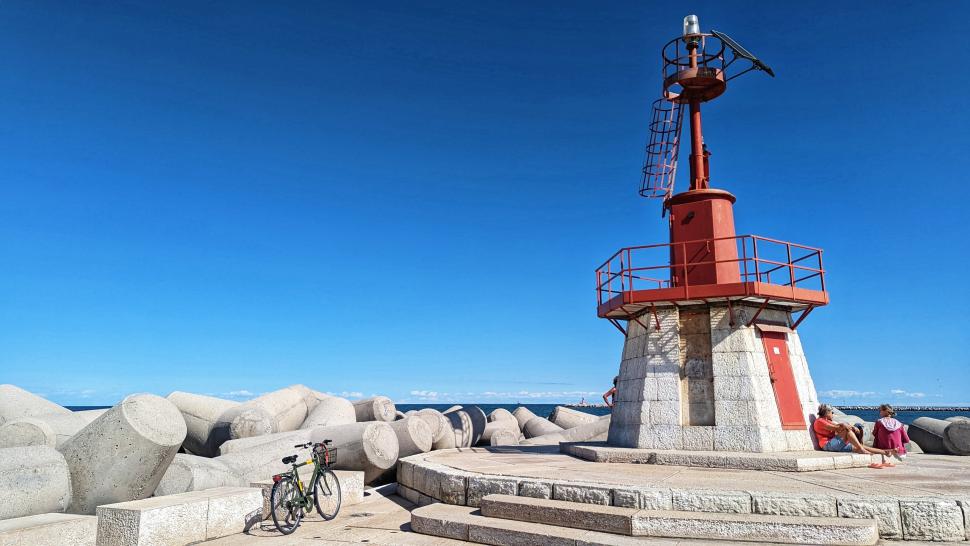 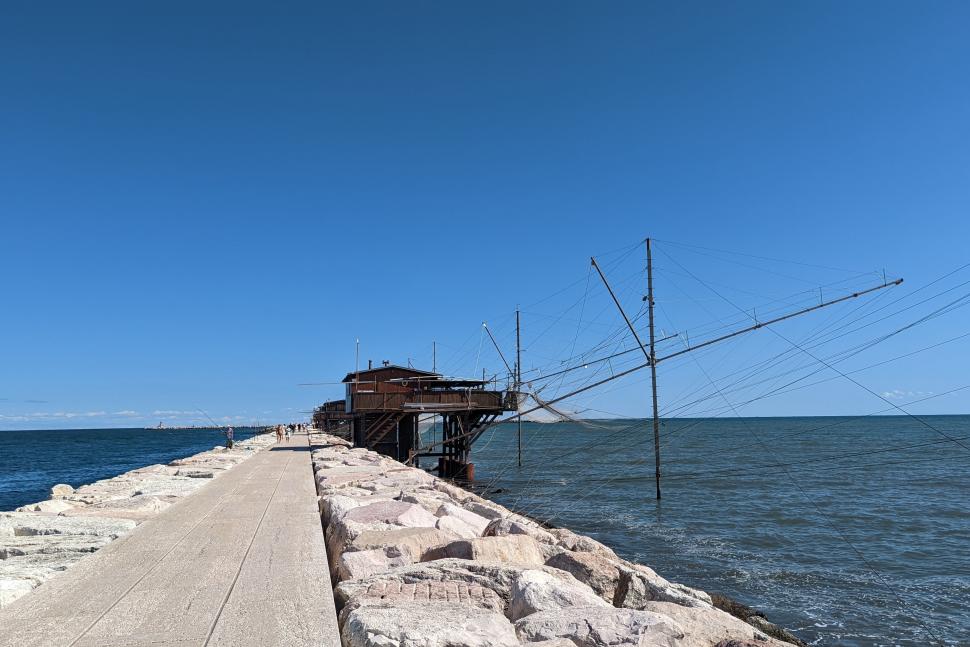 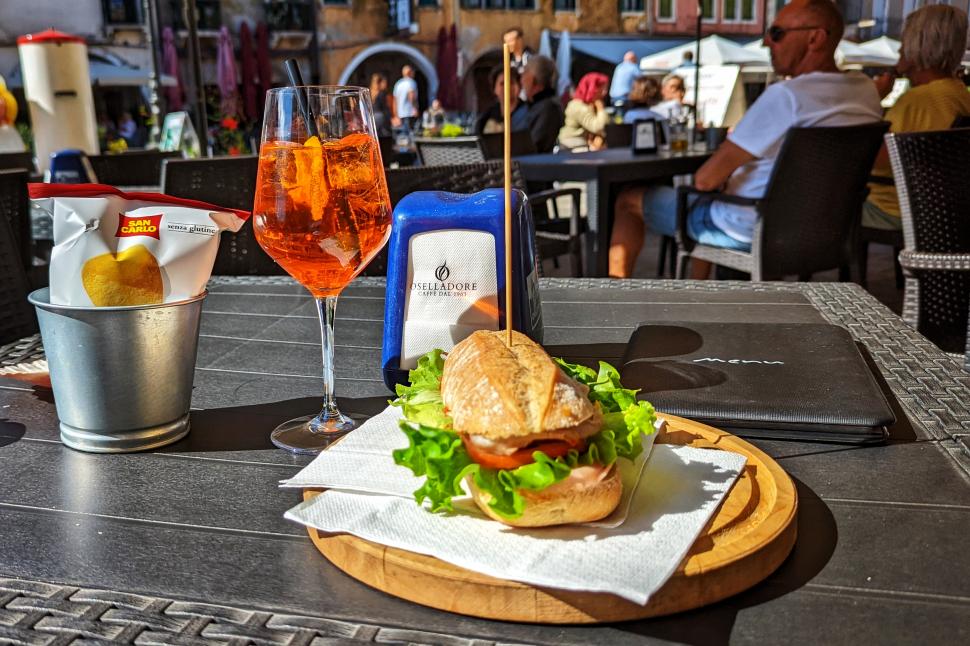 On the boat back to Pellestrina, I met a couple from Hertfordshire who were on a pre-wedding campervan holiday, staying on a campsite in Chioggia, and who were heading up to the Lido.

They’d brought their e-MTBs with them and had already tackled a couple of big Alpine climbs on them during their trip – encountering, on one of those, a visit from the p*nct*re fairy on the way back down, though happily both were still here to tell that tale.

As happens on rides where your only route option is forward, rather than left or right, we met again at the top of the island, chatting over drinks while waiting for our ferry back to the Lido. I hope the big day went well for them. 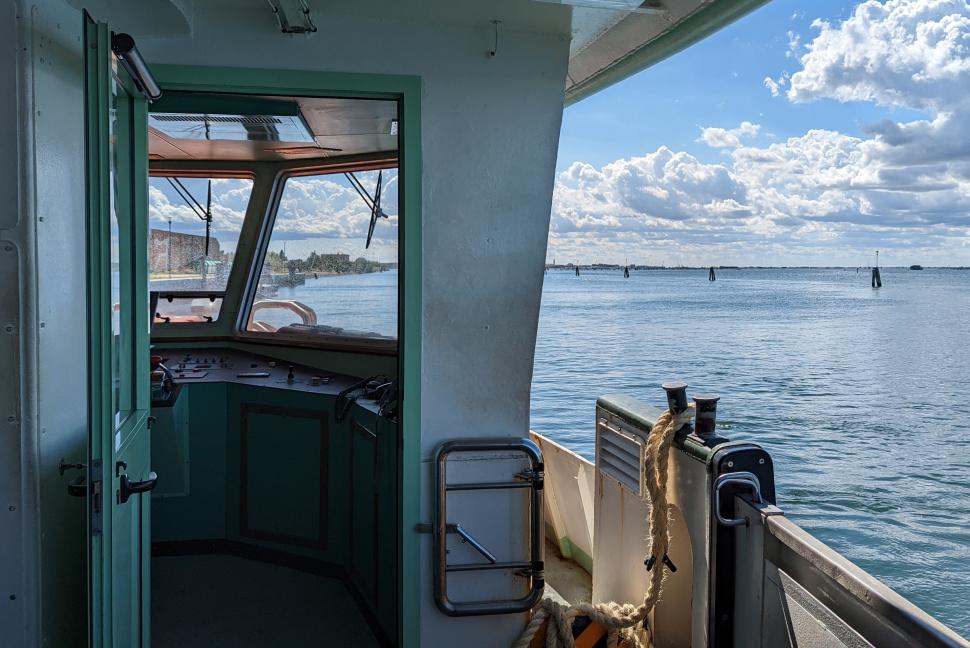 It was one of those days on the bike that you just don’t want to end, but I had to press on to return my hire bike and get a final vaporetto back to Dorsoduro, where the Corner Pub awaited me. 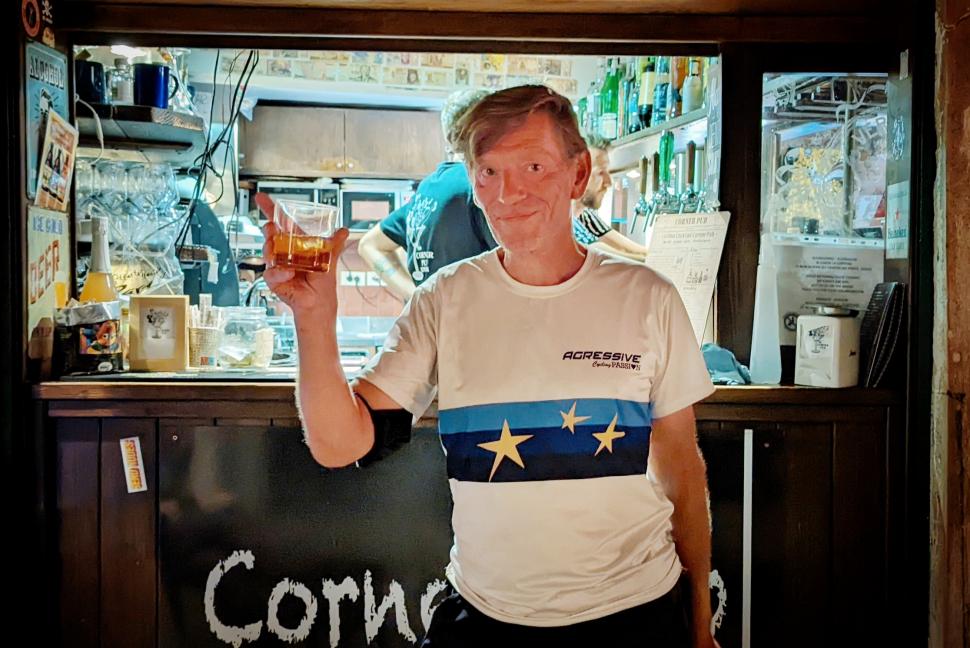 Whiling away a few minutes before departure back to the Venice of the guide books, though, I couldn’t help but be struck by the number of bicycles parked nearby.

While Venice and Amsterdam may both be famous for canals, only one of them immediately evokes images of people riding bikes.

But what struck me here was the sheer number of bicycles parked by the vaporetto terminal – many, I imagine, belonging to people lucky enough to have what must be one of the most beautiful morning commutes in the world. 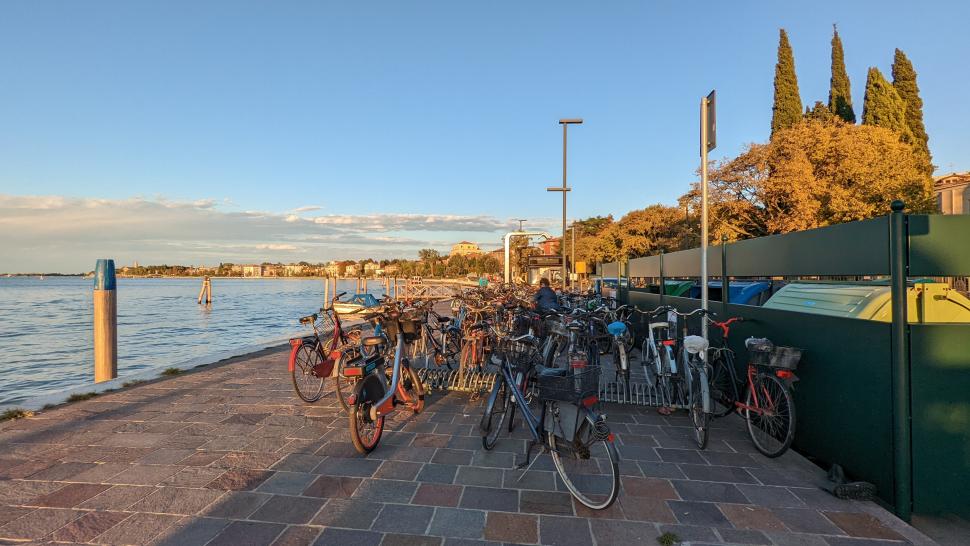 I can’t recommend this bike ride enough should you ever find yourself in Venice with a day free. It was a wonderful day that will live forever in my memory – and next time I’m there, I am definitely setting a day aside for a repeat visit to the Lido and Pellestrina. 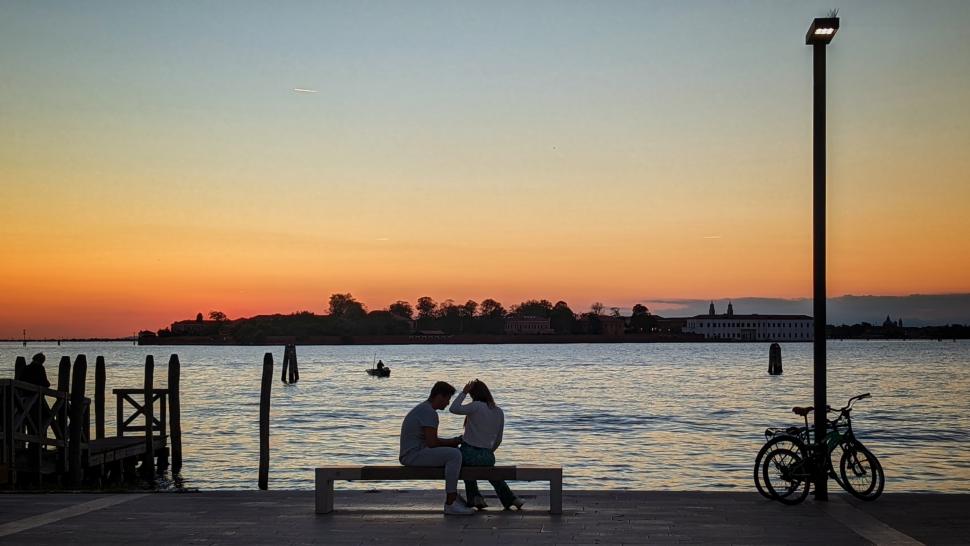 You can find more information on the E5 route through the Venetian Lagoon islands here.

Check out our 'Coffee & Ride' Collection on komoot