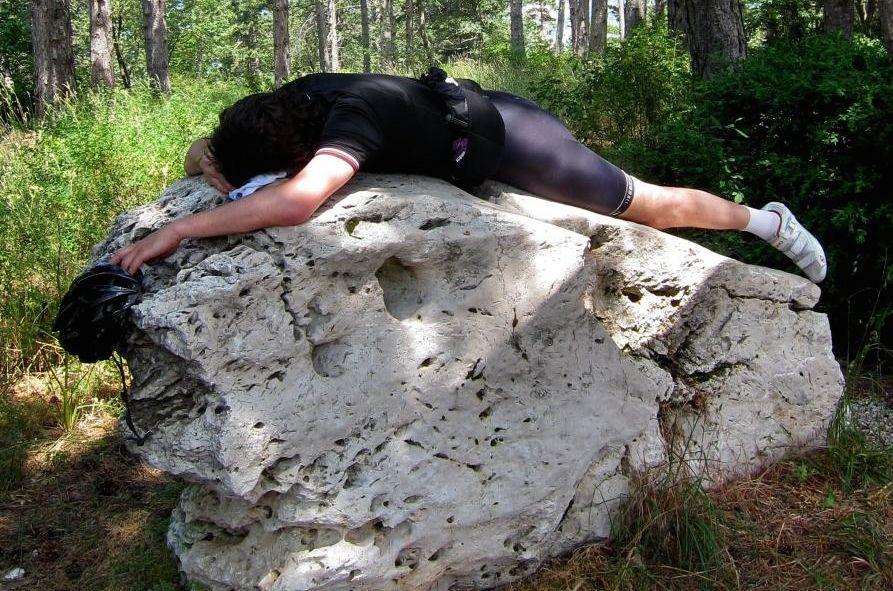 How to get fitter by training when you’re tired

Feeling tired? Maybe it's time for a ride
by Dave Smith

Intuition suggests to most riders that when they’re tired they need rest. Suggest training when tired and arms are thrown aloft in horror – “but you’ll get over-trained and ill”.

No. No you won’t. Not if you’re careful. What you will get is an enhanced adaptation to the exercise and a boost in performance.

Consider how a rider comes off a grand tour, a fatigue infested and almost inhuman three weeks of racing, then with some rest finds a great seam of form. Can you imagine them not racing because they were ‘tired’? The key is managing recovery and health status, whilst allowing quite an extreme overload.

We’re no different in stravaland and I want to explain why it’s not only OK to ride when you’re tired, BUT why you should and how to go about it.

A change IS as good as a rest

Let's say you commute to work by bike. Same route every day, there and back for years. You become efficient at riding to work. Then some diversions are put in place and you can’t use your usual route. Unfamiliar roads, you take some wrong turns, go too hard up some hills – you’re less efficient.  Then in time you adapt, and when the old route is available, you now have more options – more resources to call on.

When we exercise we rarely recruit all the muscle fibres within a muscle. When in a state of fatigue, our preferred fibres that have developed a great neural drive and aerobic physiology are less able to contribute as much power as normal. So we have to recruit less used fibres with a less optimally adapted status. This explains the cramps in weird places when at the extreme end of our limit - we’re trying to use muscles that aren’t conditioned. However with use, by forcing their contribution, they become able to contribute when we’re fresh – more resources to call on when doing our normal rides, means more power.

With training, the sole purpose is to generate a state of overload - in the force we have to produce, the duration of the force production, the supply of oxygen, the fuel sources, the neural drive to make the muscle contract and so on. In addition we have to recalibrate the extent to which the brain allows us to endure physical exertion.

If you limit your training to ride then rest until you’re fresh, you’re limiting the degree of adaptation you’re demanding from the body. Whilst extreme overload isn’t advisable, it’s actually quite hard to define extreme overload – until it happens. We’re incredible at adapting on the hoof, something you may have discovered if you’ve ever ridden a long tour or multi-day event. You start riding on day three, you don’t know how you’ll make it through the day and two hours later you’re zipping along.

How not to overdo it

So what steps can you take to bump up your adaptation without going too far and starting to break down rather than build up?

The key is that recovery has to happen at some stage. Whether 48 hrs, an easy week or a month with little intensity, you have to permit the body time to undertake repairs to cellular damage, make changes to blood-chemistry, restore fuel supplies and also become mentally fresh.

Before starting to push the boat out on your training you need to be free from injury and illness - and fresh. My first suggestion is to double your training load for two weeks, then have an easy week with half your usual volume. There, that didn’t hurt did it? Much.

Finish a long tough ride with a hill interval session.

Decide if you’re really too tired to train after 40 minutes or so of riding - how your legs feel eating breakfast isn’t an ideal indicator.

A great part of these periods of overload is the mental aspect, the determination and resilience you develop by riding father and harder than you’ve done before, heading out the door when you feel tired, then seeing how you tackle arduous rides in future.

One fairly recent interesting development in training is to use a double session, with the second of high intensity in a fasted state. In effect you deplete your glycogen stores during session one in the morning, eat a low carb diet through the day, then undertake an interval session when fatigued. Although the quality of the session will be reduced, you’ll see lower power/speed, the adaptation will be enhanced above normal levels.

While experimenting ensure that you eat well. Healthy non-processed food - lots of green leafy vegetables, healthy protein sources, good fats and plenty of water. Be conscious of injury pain in contrast to fatigue discomfort and signs of illness. However, expect to be OK.

So give it a go, at best you’ll discover a new performance level, and if you’re self-aware, the worst that could happen, won’t. And if you want, you can join me riding 50% of the Grand Tour distances in 2015 – I can assure you of big gains, after the fatigue!