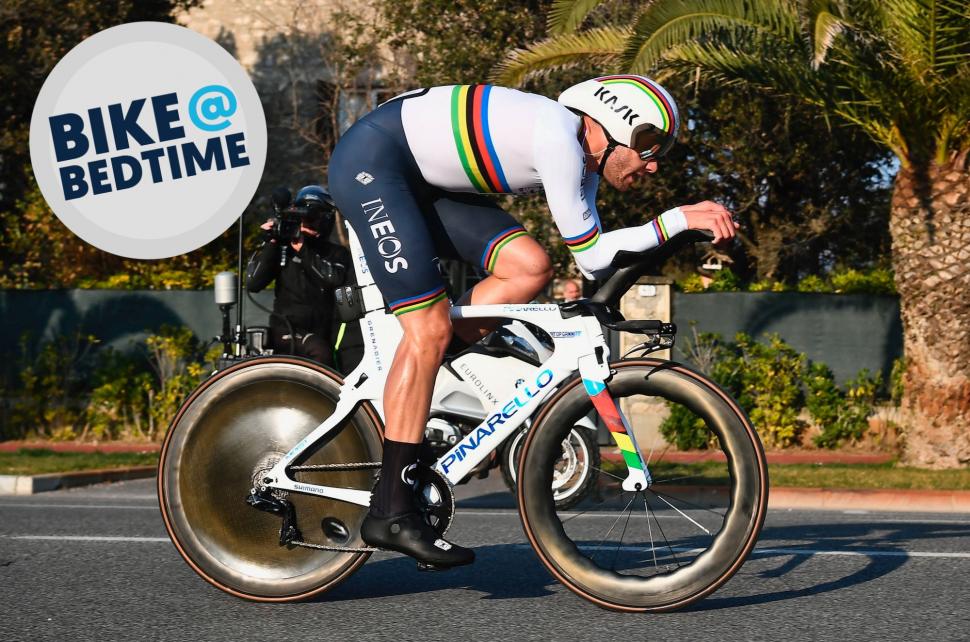 Filippo Ganna took his third time trial victory of the year in the first stage of the 57th Tirreno-Adriatico yesterday (7th March 2022), covering the 13.9km (8.6 miles) at an average speed of 54.6km/h (33.9mph) on a Pinarello Bolide TT with a new finish.

“I did a very good ITT today,” said Ganna. “I took some risks and passed very close to the barriers at the U-turn. But I came out well.”

Pinarello says that the Bolide TT draws heavily on lessons learned while putting together the Bolide HR, the bike that Bradley Wiggins rode to set the Hour Record in London in 2015 (since beaten by Victor Campenaerts).

The bike features a concave down tube designed so that a water bottle can fit in there with reduced turbulence, although Ganna rode without one – he was riding for just 15 minutes, after all.

The very slightly sloping top tube is optimised for aerodynamics while both rim brakes are covered to reduce drag too.

The extended area behind the Bolide TT Onda fork dropout – which Pinarello calls the ForkFlap – is derived from the Bolide HR. The idea is to reduce the detachment of the airflow, decreasing turbulence and reducing drag.

The frame is made from TorayCa T1100 carbon fibre and Pinarello goes for an Italian threaded bottom bracket.

Although you can’t see it here, the top tube features the locations, dates and times of Ganna’s two individual time trial wins at the UCI Road World Championships. His ‘Top Ganna’ nickname also appears in various positions on the frame, written in a Top Gun film logo style.

Ganna was using a Pinarello Bolide TT in a new finish at Tirreno-Adriatico: white with metallic blue decals, and his world champion bands on the fork. It’s a cool look.

As on most high-end time trial bikes these days, the stem is integrated into the top tube/head tube junction so that it doesn’t increase the size of the bike’s silhouette. 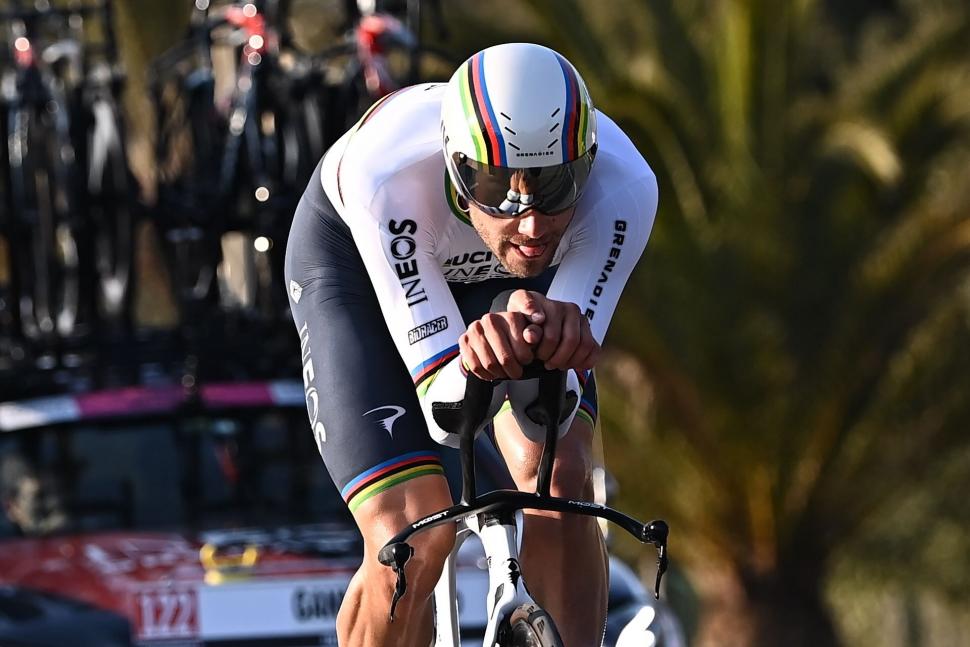 The cockpit from Most, Pinarello’s in-house brand, is custom moulded to Ganna’s arms. His extensions are set well above the base bar in order to keep his torso in the optimum position for aero efficiency.

Ganna favours a position with his forearms sloping and hands touching just below chin level. The ends of the extensions bend towards one another so that he can hold his hands in a neutral position, and they incorporate Shimano Di2 shift buttons.

Ineos Grenadiers are sponsored by Shimano so all of their bikes are equipped with top-level Dura-Ace Di2 groupsets, although this looks like the 11-speed 9100 generation rather than the newer 12-speed 9200 version.

How come? We don't know for certain but it could simply be that Ganna wants to use a 58/46T chainset here – that’s what he has used on similar courses in the past – and this isn't available in 12-speed.

Shimano/Pro is the team’s official wheel supplier too although Ineos Grenadiers (in its various incarnations) has used unbadged wheels from other brands for years while searching for performance advantages. That’s a Princeton Carbonworks wheel on the front – it looks like the Wake 6560.