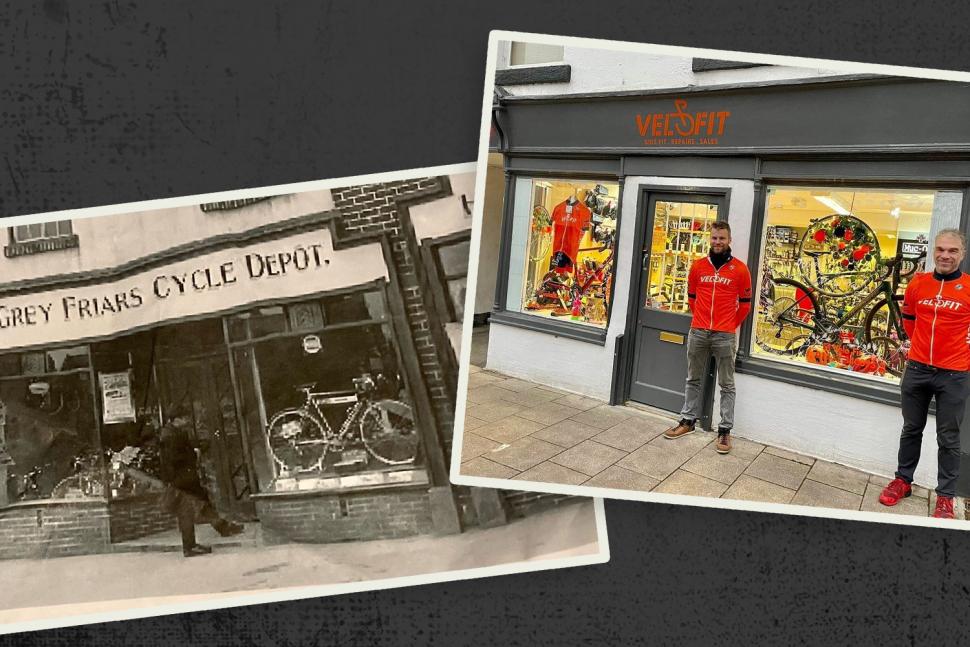 The evolution of the LBS lead image

The evolution of the great British bike shop: how one LBS with a proud history is moving with the times

From oily old emporiums to pristine studios, bike shops and cycling in general have changed a lot over the years. Here’s the story of one old school bike shop that has adapted to changing times
by Steve Thomas

Somewhere around about half of my adolescent years were spent in the backroom of a local bike shop. Perched on rickety old three-legged milking stool and armed with hammers and ancient iron instruments, I learnt just about all there was to know about repairing bikes of old from that stool.

From servicing Sturmey Archer three-speed hubs to building my own wheels and tapping out stripped bottom brackets, it was all part of the cycling initiation. These places acted as everything, from local club community centres to treasure troves where you could find everything from a grub screw, to a 20 year anniversary Campagnolo Record rear mech to pair of matured and pre-stretched tubs. Oh, how things have moved on since then!

All this said, many did find these places somewhat intimidating and unwelcoming. These days the high-end studio and coffee shop concept stores are de-rigeur, and as for getting that old three-speed hub serviced and finding that ancient screw, there’s a pretty slim chance of that happening.

As for the experience; the new-style shops are very different overall. Maybe more inclusive, maybe more aloof? I guess it differs from shop to shop. 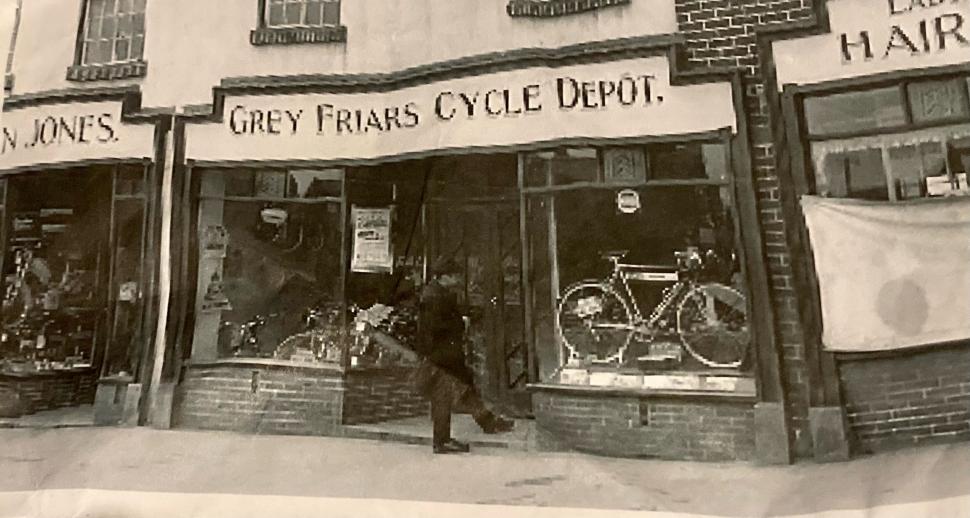 One of the ‘almost local to home’ bike shops for me was Stan Jones Cycles in Shrewsbury. This place was crammed full with mixed display cabinets, dusty boxes and gems of old hidden in every nook and cranny.

The shop was for many years run by local racing ace Mike Jones, the grandson and heir to Stan. Mike is now in his 50s and is still out there winning bike races, including the recent age group National Masters XCO MTB Championships.

We asked Mike, just where and when did the whole Stan Jones Cycles story start?

“My granddad had just finished his stint in the navy. He was in the submarines during the war, didn’t talk much about his time there but was awarded quite a few medals for bravery.

“He was working for someone else in the bike shop and had the opportunity to buy the business when the old owner decided to retire.“

Ironically Stan was not the man when it came to riding the bikes he sold, and neither was his son and successor Tom. Mike was the first of the Joneses to grip the bars in anger.

“My granddad didn’t cycle, neither my dad. I was the first in the family to actually take up cycling.”

Mike started racing as a schoolboy, and virtually grew up in in the family-run shop.

“It was very much a family business with holidays and outings all centred around quiet times, plus weekly meetings at my gran’s house to discuss the shops”, Mike adds.

Wedged into a long and old labyrinth-like building, this was very much the kind of local bike shop that many of us in that era grew up visiting, and was a place of great stock and mystery. What exactly lay beneath the surface and the latest kit?

“The stock control wasn’t great. My granddad used to buy a lot of stuff in bulk to get the best prices.

“Things were a lot simpler then and bikes were mainly used for commuting, so things like wheels, tyres, tubes and brake blocks were all bread and butter daily sales.“

When cycling started heading in a slicker and more upmarket direction, older bike shops often struggled to cope with the change in demand. Did the Joneses keep up and see this evolution coming?

“Definitely not my dad, he was quite happy with the traditional bike shop”, admits Mike.

“I think because I was more integrated in the cycling scene the change was a lot more obvious. Especially at the high end of the sport, and as lots of new sportive-type cyclists started entering the clubs became more inclusive.”

Mike saw logic in embracing the evolution potential: “Bike shops have always been a meeting place, so it always made sense that to attract the right type of customer having a studio feel, and maybe a coffee area would help drive business.“

Even before this there was mail order that threatened the LBS, and then when the internet arrived online shopping was also an inevitability, which was a blow to many older bike shops who were yet to adapt. Did it impact Stan Jones?

“Offering services like a brilliant workshop, bike fitting, group rides, demos and open days helped. The mistake for some bike shops was to try and compete head-to-head with online retailers on pricing.” 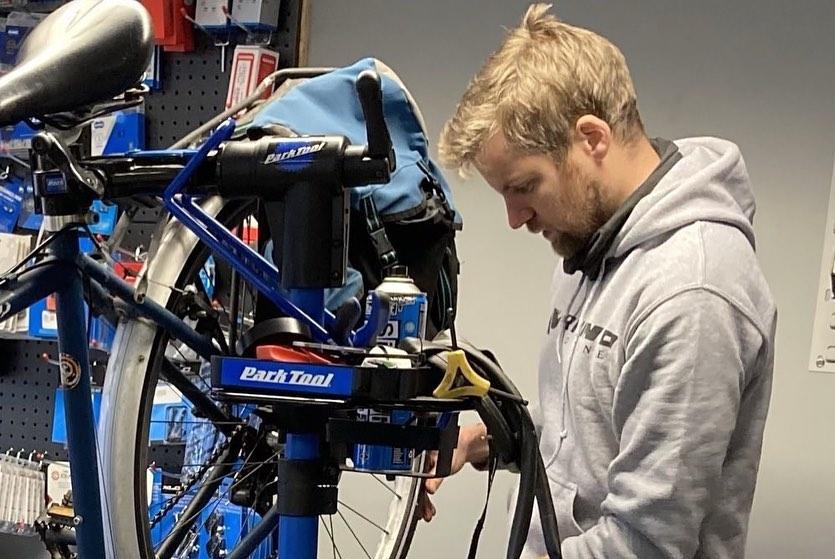 Many shops of old carried the name of their founding father over the shop front. Some also recognised that somehow retaining that history and adding a modern twist was a step forward in time, and thus Stan became Stan’s and Mike moved to a new premises in town and went all in for the new approach.

“I think I was at a stage where I wanted to grow but didn’t know how to. The decision to go more modern was to offer a real cyclist lifestyle business. Offering all of the above plus a coffee shop and to get more streamlined on our brand offerings.”

Was it a comfortable leap into the modern era?

“I did miss the on hand management of the old business”, adds Mike.

From piled up boxes to shiny worktops and tall skinny lattes, how different was it to operate?

”It was quite different in terms of people’s roles. Staff had to step up and manage their own sections because we were a lot bigger. We analysed a lot of sales and ways we could market the business.

“We also got a lot more integrated in the club scene, offering rides and club events at the shop. That did attract a more specialist type of clientele; our average price spend on bikes and accessories went up a lot.“

With his family fully grown, Mike decided that it was time to get out of the bike shop game, and headed off to France where he and his wife ran a cycling-based accommodation centre for several years, while Stan’s became a Trek Concept store.

With the benefit of hindsight, what were the key elements in making that transition from old to new style of bike shop? 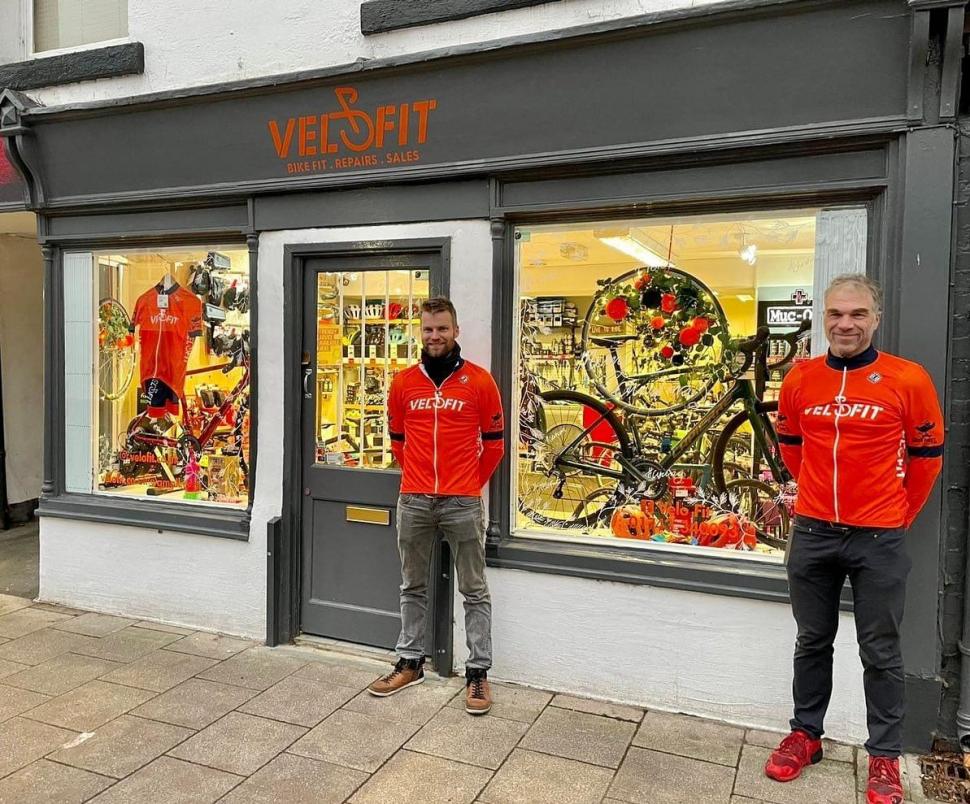 Global events, politics and family circumstance lured Mike and his family back to the half-timbered streets of Shrewsbury during the pandemic, and he decided to make the most the unforeseen micro-boom in cycling, opening the new Velo Fit shop in town.

After a lifetime spent in bike shops, how did he approach and frame the concept this time around?

“We primarily do repairs, servicing and bike fits. I still sell new bikes but only mid to high-end and some e-bikes. Our average bike sale is £2000.”

After being out of the game for a while, is the experience different to the one he left behind?

”Not too different really.

“We offer a great service to our customers. Good quality repairs, fast turnaround and great advice from really experienced guys who really know what they’re talking about.

“We are well-known with all the cycling groups and participate and engage with as many as possible.”

Does Mike still see a place for those old-school bike shops of the past, and can independents survive against the bigger chains?

“Yes there is, definitely a place for them. From my point of view it depends on your size and how you scale your business.

“We are small so it’s good for us. Reputation is really important, and I’ve built mine over the years and continue to offer great service. So we always get recommended.”

Of restarting a bike shop business during Covid, Mike says: “We opened at the back-end of the pandemic and hit the ground running. We missed the big boom but yes, it was a boost.”

Trading builder’s tea and oily rags for fancy coffee and rubber gloves aside, this is just the tale of one family and their bike shop of old that evolved over time. There are, of course many similar and also vastly different tales and takes on the subject. The nature of those old shops compared to the glitz and glamour of new ones are very contrasting, and we’re sure you have your own memories and feelings on the subject of this evolution.