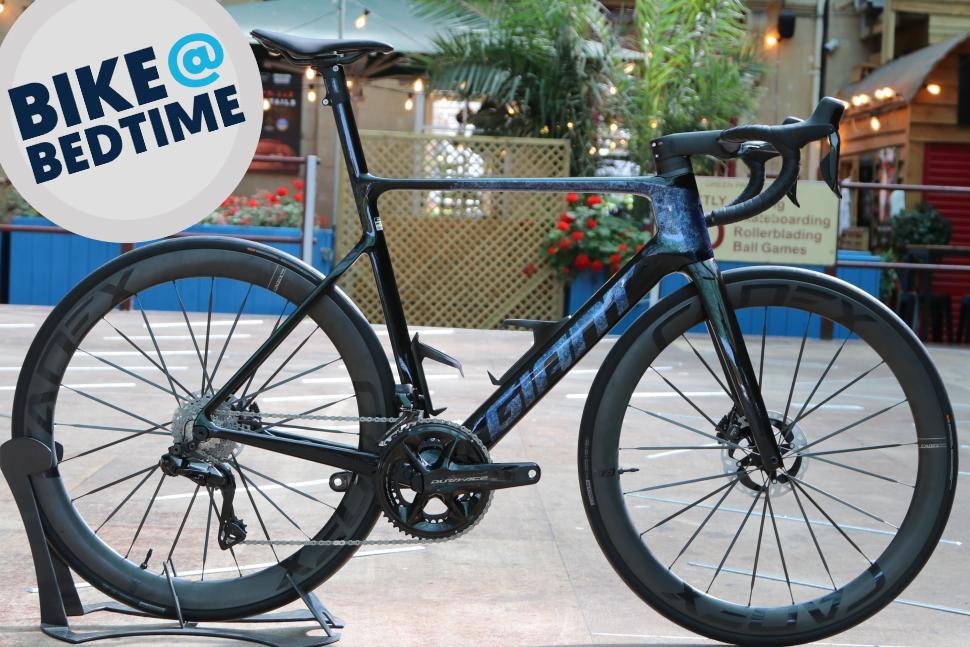 Bike at Bedtime: Check out the “fastest ever” Giant Propel aero road bike

Giant says its 2023 aero road bike is significantly lighter than before as well as being much more aero...
by Mat Brett

The first 2023 Giant Propel aero road bikes will arrive in the UK this month so let’s take a look at the new design which is said to be lighter and stiffer than before (of course!) as well as more aerodynamically efficient. Giant is introducing the updated Propel in three levels, the Propel Advanced SL being the top one. Giant says that its frameset is 225.5g lighter and 9.2% stiffer than before. Giant also boasts that the 2023 model improves aerodynamic drag by 6.21 watts at 40km/h (25mph) and that the stiffness-to-weight ratio has improved by 26.4%. Those are some big claims. 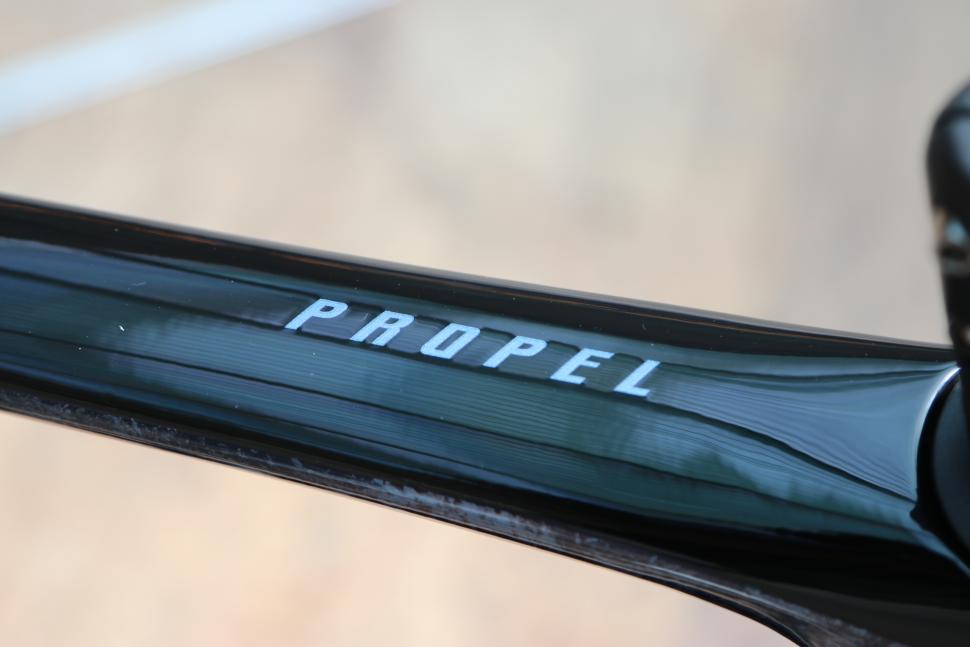 The frame features truncated ellipse airfoil shapes in key areas including the down tube, seat tube and seatstays.

“The frontal sections, where aerodynamics matter most, feature sculpted lines and that truncated ellipse shape to minimise drag,” says Giant. “We even created two different water bottle cages (one for the down tube, one for the seat tube) to minimise aerodynamic drag for each of these specific tubes.” 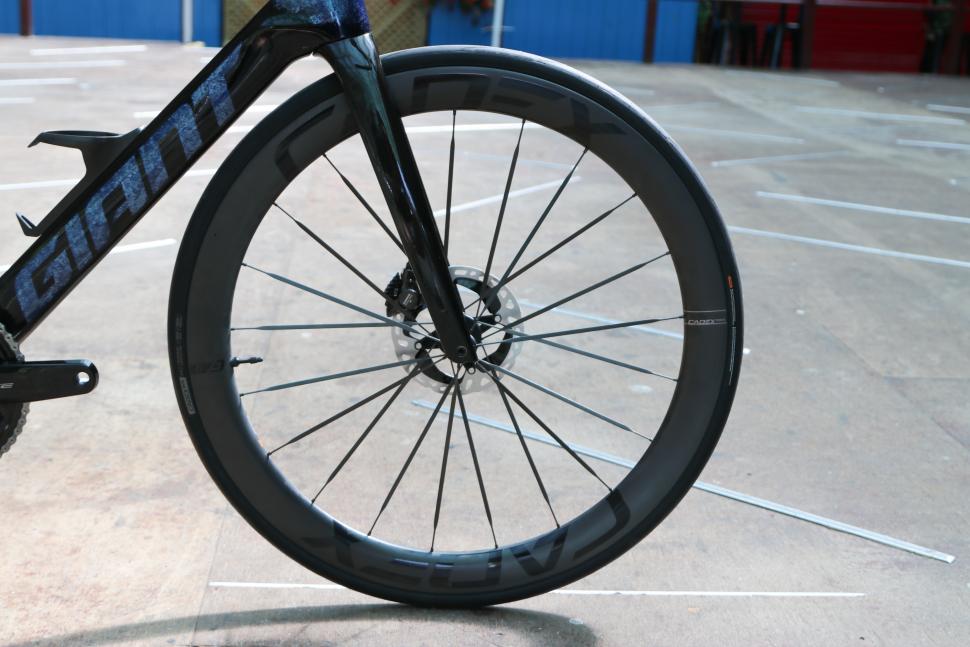 Giant’s claim that the new Propel Advanced SL is 6.21 watts more efficient than the previous version at 40km/h (25mph) relates to the bike as a whole – with its new proprietary Contact SLR Aero handlebar and stem, Cadex 50 wheels and Cadex Aero tyres.

Giant says that its engineers have altered the shapes and diameters in sections of the head tube, down tube and bottom bracket area, and also changed the Advanced SL Composite material's layup, to achieve greater stiffness. 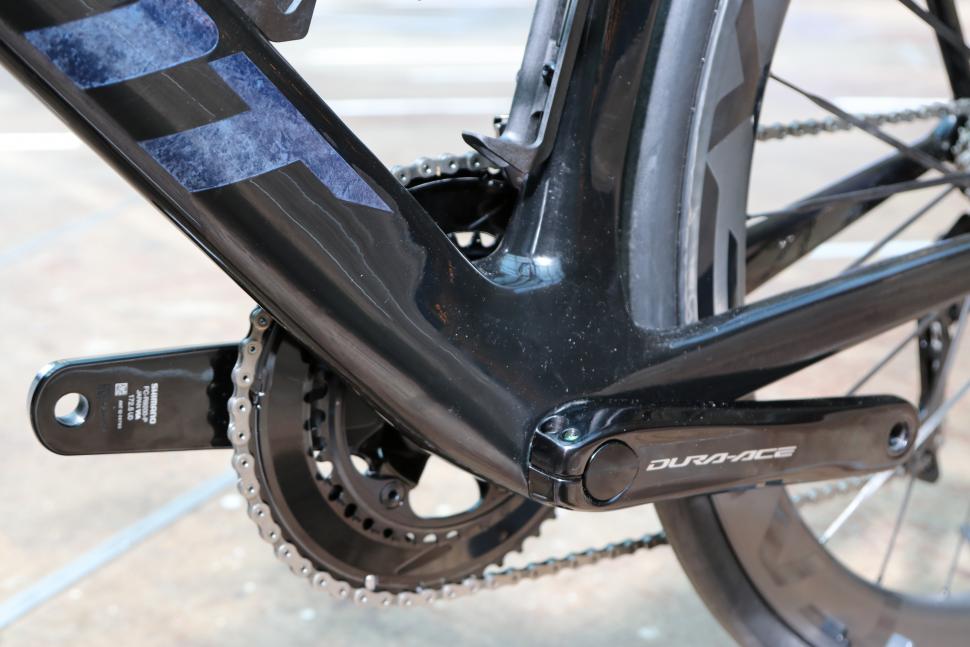 This increases pedalling stiffness at the bottom bracket (7.5%) and also in the overall frame stiffness (9.9%), which is the amount of frame and fork torsional flex under load. When you factor in a significant weight reduction, that leads to a stiffness-to-weight increase of 26.4%. 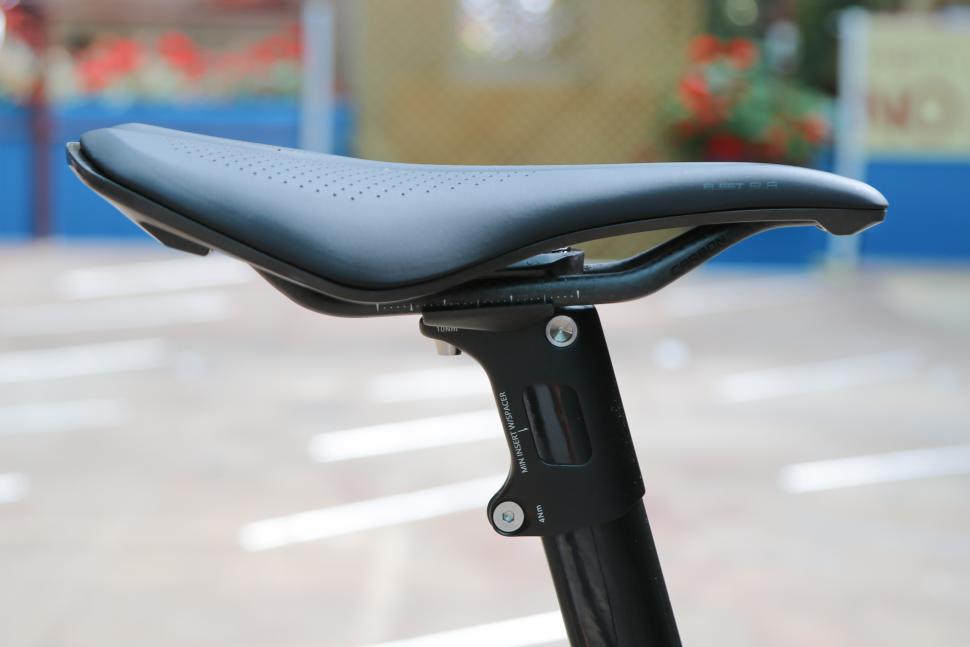 On the flip side, the seat tube, chainstays and integrated seatpost have all been re-engineered to provide a smoother ride. They look far slimmer than on the previous generation Propel Advanced SL. In fact, if it wasn’t for the name on the top tube, you’d have a hard time connecting the new Propel with its predecessors. Giant says that as well as improving compliance, the skinnier back also saves weight.

There’s also space for tyres up to 30mm now, and wider tyres can make a big difference to the ride quality. 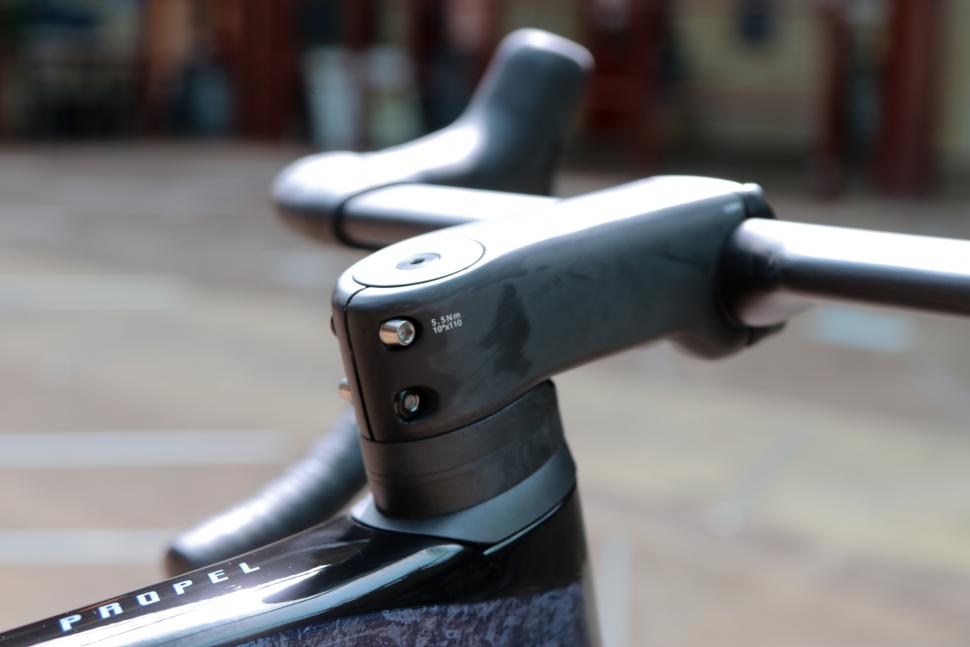 Giant has redesigned the Propel Advanced SL’s cockpit, introducing a new two-piece Contact SLR Aero handlebar and stem setup. The idea is to make it easier for you to swap components and adjust your fit. 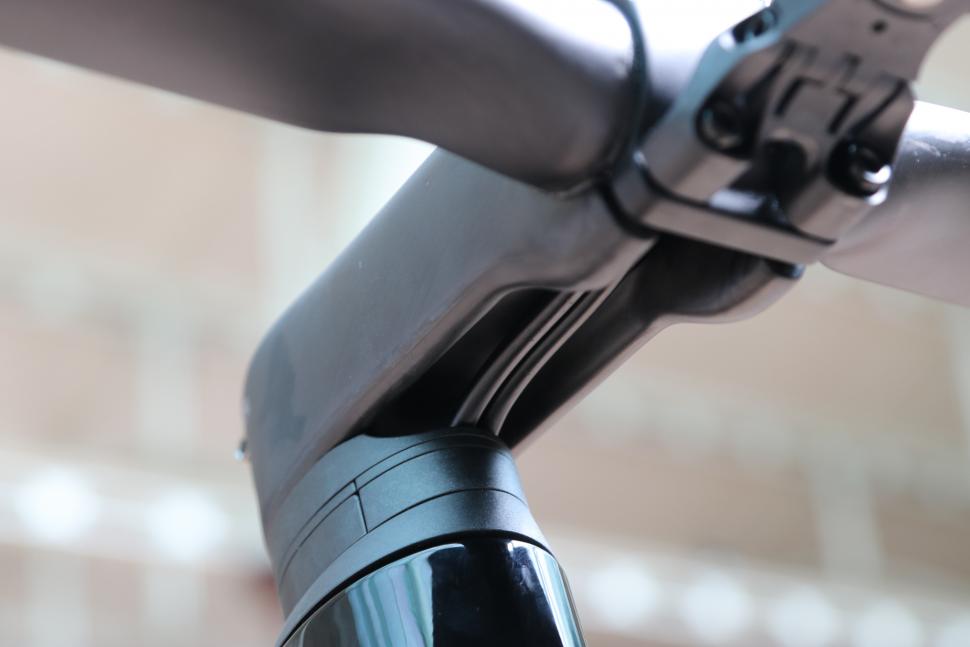 Brake hoses and any cables are routed inside the bar before resurfacing in the centre. They then go into a channel on the underside of the stem – so they aren’t on show – and from there into the frame. Headset spacers are a two-part interlocking type, so they can be added or removed without the need for recabling.

The new Giant Propel Advanced SL frameset (size medium, including hardware) has a claimed weight of 1,429.5g while the new Contact SLR Aero cockpit is a claimed 360g. 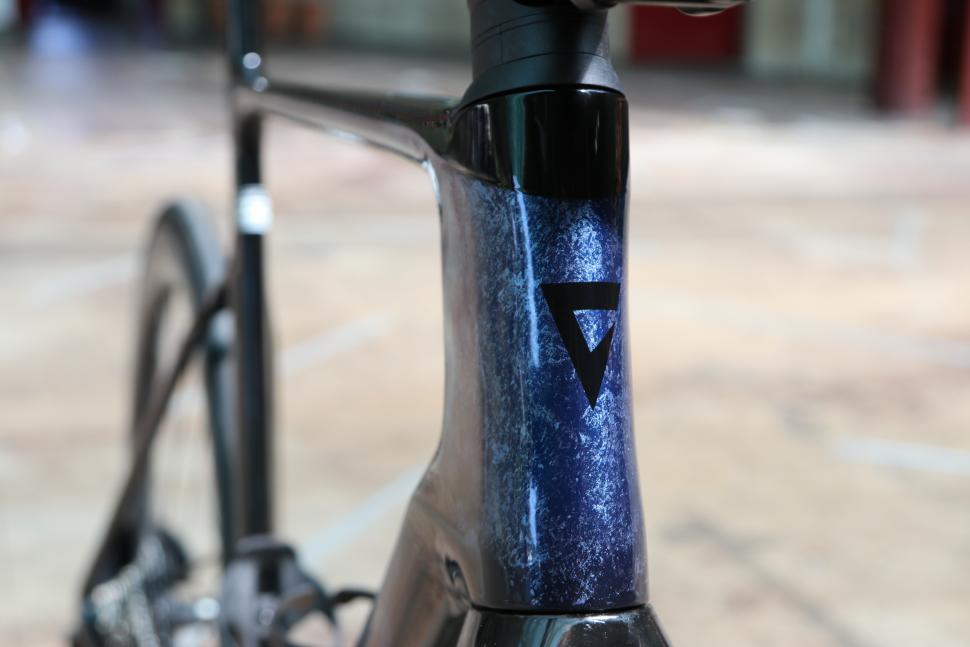 The finish pictured here is called Carbon Smoke. It is a clear coat lacquer containing just a small amount of paint to keep the weight down. All of the colouring is applied as decals.

We’ve not ridden the Giant Propel Advanced SL but we did get our hands on one at launch and it weighed 6.96kg (ML size, Shimano Dura-Ace Di2 build) on our scales.

The Giant Propel Advanced’s frame is the same as that of the Propel Advanced Pro’s but the fork comes with an alloy steerer rather than being full-carbon.

Some people have speculated that by making its aero road bike much lighter than previously, Giant intends to go down a ‘one bike to rule them all’ route with its high-end race models, like Specialized has with its Tarmac SL 7.

> Read our review of the Giant TCR Advanced Pro 1 Disc

However, Giant says that this isn’t the case, pointing out that the TCR is still significantly lighter with a frameset weight of 1,265g (painted frame, painted uncut fork, integrated seatpost, seat clamp, front and rear derailleur hangers). You can also run tyres up to 32mm from most brands on the disc brake TCRs, whereas the Propels take a maximum width of 30mm.