Elia Viviani is an Olympic gold medallist who has won stages in all three Grand Tours, but back in 2014 he was riding his first Tour de France for Cannondale on the supremely popular SuperSix Evo. Cannondale first introduced the SuperSix in 2006, then brought in the SuperSix Evo in 2011. It has been updated twice since then, but throughout it has been one of the best bikes in its class: lightweight and stiff with excellent handling. It combines its great performance and dialled geometry with more comfort than you'd expect from a race bike. It’s not an aero road bike, but today’s SuperSix Evo has aero features. The version that Viviani was riding in 2014 wasn’t intended to reduce drag – unless you count the fact that Cannondale chose to stick with 1 1/4in bearings at both the top and the bottom of the head tube in order to keep the frontal area low. Rather, Cannondale focused on keeping the frame weight below 700g, which helped with the bike’s snappy acceleration. 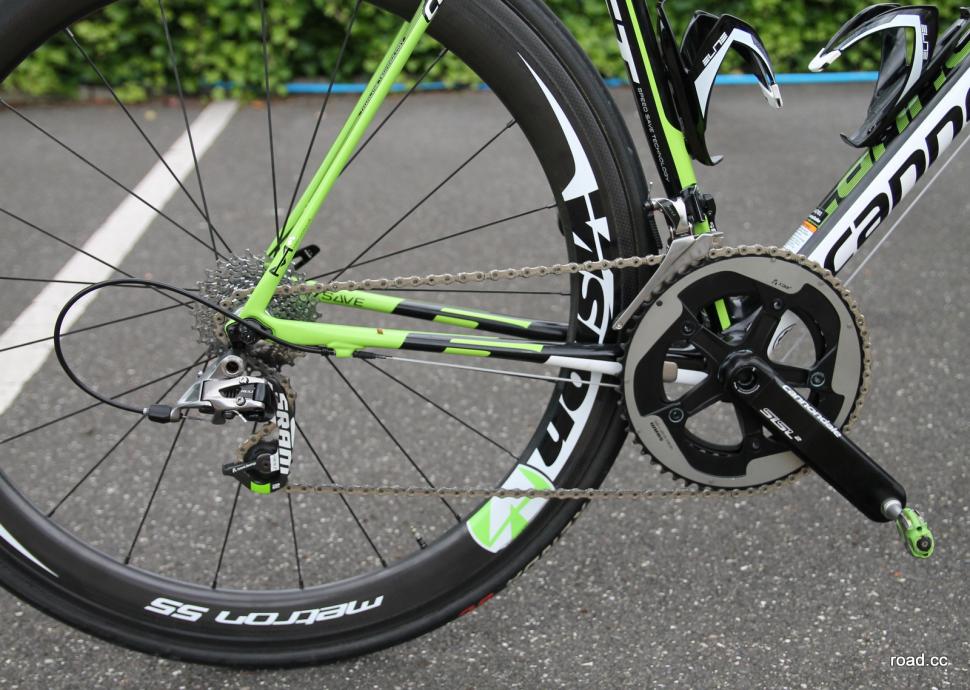 2014 isn’t exactly an age ago but Viviani’s bike seems to belong to another era thanks to its cable-operated SRAM derailleurs. Granted, most bikes available on the High Street still use cables but it’s something that you never see in the pro peloton anymore. SRAM’s Red eTap electronic groupset was spotted at the Tour of California in 2014 and officially unveiled in 2015, the last of the three big groups manufacturers to switch to electronic but the first – and so far the only one – to go wireless.

Viviani stands 1.77m tall and was riding a 52cm frame – small for his size. Pro riders are forever riding bikes that seem too small by normal standards in order to get a low front end and an aero body position. That said, although Viviani did without headset spacers, he used a stem with a rise, bringing the handlebar up a touch. That stem was 130mm stem which, by pros’ standards, isn’t extreme. His bar preference was an FSA Plasma carbon fibre integrated bar/stem. Integrated systems have become ever more popular since then.