A Day on the Alpe - all pics ©Owen Rogers

A Day on The Alpe: Experiencing an iconic stage of the 2013 Tour de France

With the announcement of the route of the 2014 Tour de France just 36 hours away, Owen Rogers relives an iconic stage of the 2013 race, the day the Tour climbed l'Alpe d'Huez twice.

They’re coming, they must be. There’s a roar drifting up the mountain from Dutch corner, a few hundred metres down the hillside. It rolls towards us like a huge aural wave, and Tejay Van Garderen surfs it out from the crowd below us. There’s no suffering on his face, just tiredness and concentration as he fights his own battle against the never ending gradient. 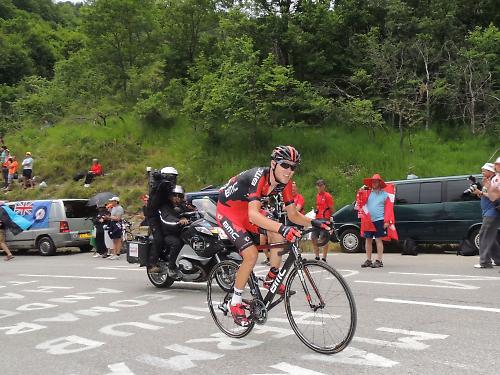 A few seconds behind, Christophe Riblon follows the American. Aggression and determination burn strong in his eyes. The rest of the breakaway follows in dribs and drabs, each rider suffering in his own special way. Behind them, nearly a minute back Sky lead Froome and a large group through the throng, all the GC hopefuls keeping their powder dry for now.

Knowing the road up the Alpe had been closed the day before, we left our hotel before the flat light of dawn had revealed the beautiful Alpine landscape, riding our motorbikes on wet roads past hundreds of camper vans and tents, occupants emerging, blinking in the pale light of the damp humid morning. We’d intended riding our motorbikes as near as possible to Huez, along the back road, via Villard-Reculas but, as we arrived among the traffic chaos and Gendarmes whistles near Bourg d’Oisans, decided to park by the road and walk up the mountain. 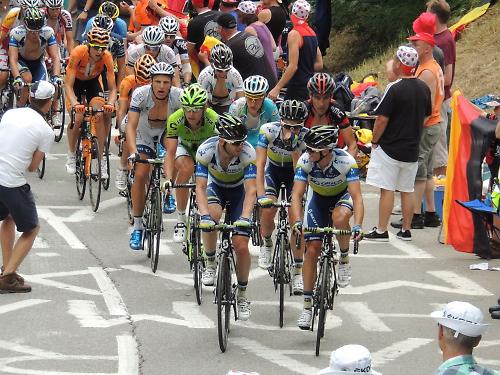 Anticipation was palpable the moment we removed our helmets. Hundreds of cars were parked on either side of the road. Behind steamed windows some still slept, by others, tired bodies were rolling sleeping bags and gathering possessions ready for their day on the mountain. Stalls outside the houses of entrepreneurial locals sold everything from beer to water, burgers to biscuits and, having missed breakfast, we grabbed a coffee and a pain au chocolate to fuel us up the hill and ease memories of last night’s Leffe.

The atmosphere was brilliant and remained so all day. People of all nationalities were setting off to find their spot, occasionally ushered by pasty faced Gendarmes, looking like they’d rather be anywhere else. As we walked we enviously sniffed breakfasts being cooked by roadside campers who drink coffee while food sizzled. 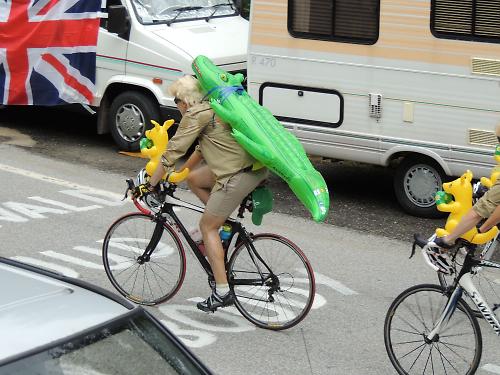 We chatted with Australians, Americans and a couple of lads from Yorkshire who were riding up, but kept stopping for a rest. We even said hello to Christian Vandevelde out training, first down, then back up the mountain, overtaking all those who had chosen to ride to their own view point.

With no food or drink to get us through the day, and no locals selling food past the village of La Garde, we had no choice but to reach Huez, but the longer we walked the more it became clear that leather motorbike trousers were not ideal for such a hike, forcing us to stop occasionally to allow the clamminess to abate slightly. The ascent seemed to go on forever and became the longest six miles I have ever walked. 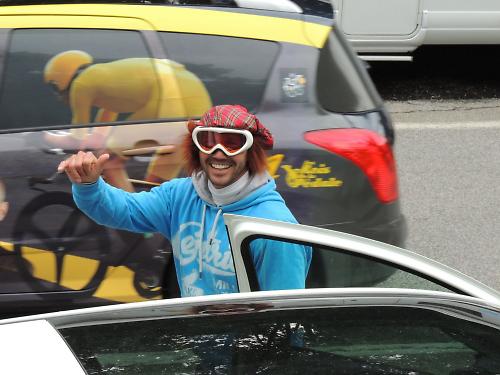 There was plenty to entertain us though: crowds full of characters; cars and camper vans parked in impossible and unlikely places at the road side; groups of Gendarmes, some blankly staring into space, others chatting as if with long lost friends; flags and banners pinned to the rocks; and the buzzing chaos at Dutch corner, where polythene sheets protected huge sound systems from the overnight rain which had blurred the painted road and. Even at 9am, the beer was flowing, if it had ever stopped.

After grabbing a quick coffee and collecting some food in Huez, we carved some seats in a grassy bank high above the road just short of the village, then settled in for the day. It would be four hours until the race made its first pass, but time never dragged watching the world go by from our vantage point. Vehicles of all descriptions passed; press, sponsors, race officials and team vehicles of all descriptions, many of them leaving the acrid aroma of burning clutches, and of course the caravane, from which happy, smiling people threw useless tat to our hungry hands below. 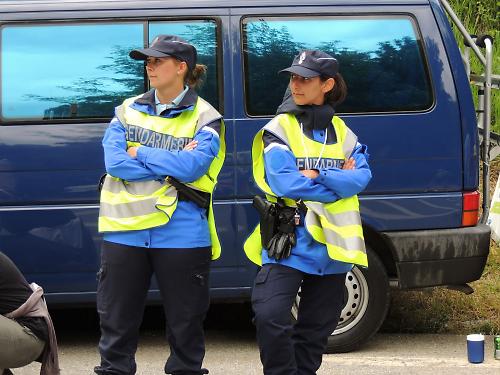 Fans provided most of the entertainment, whether they be in fancy dress or just tired from the ride up the mountain. We saw an elderly man on an ancient bicycle, wearing period costume riding the climb. A group of Steve Irwins carrying man-eating crocodiles rode past. Hulk Hogan made an appearance, and groups in Morph suits of all descriptions.

To our left some Danes, watching TV under the shelter of their gazebo, stood and cheered every Saxo-Tinkoff team vehicle which ground past. On the right, a group of Walloon Belgians sat behind a display of their national and regional flags, not a Lion of Flanders to be seen. Below us, a car load of Frenchmen, among the international crowd, strangers in their own country, one wearing a tartan hat and ginger wig, popped open another beer and prepared bread and pâté on a camping table. 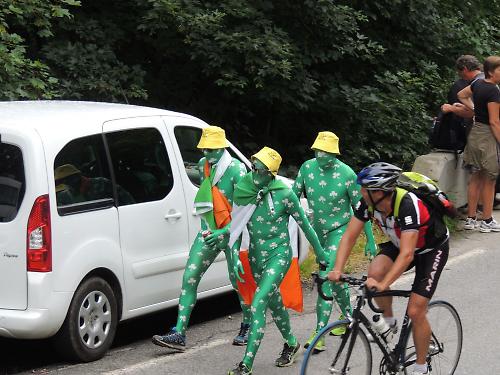 Green Edge led the autobus, Gerrans and Goss laughing in the front, leading plenty of others in no state to do likewise. Once they, and the huge entourage of following vehicles had gone a strange sort of quiet descended on our bit of road. People wandered away, up or down the road, maybe looking for a new perspective on the race, maybe heading home, ignorant of the second coming. There’d been talk of the second ascent being cancelled and I suffered a brief crisis of confidence. Even the light seemed unsure, fading slightly to a sort of lifeless flat tone, bringing a brief melancholy.

On the other side of the hill all hell was letting loose: Van Garderen was busy with mechanicals, Riblon managed a bit off-roading and Contador made yet another brave but futile attack on the damp descent of the Sarenne. 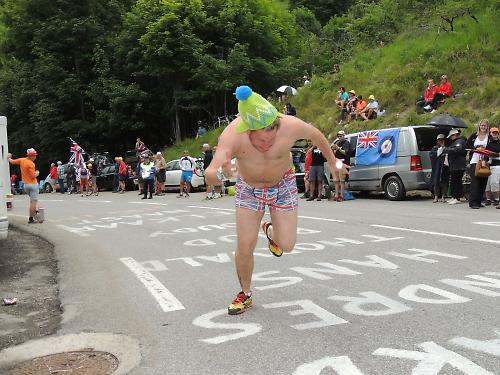 Where we were, the rain held off and slowly the atmosphere began to build again. Two female Gendarmes were roundly booed when they told a young lad and his Dad to get off their bikes, then cheered when they relented. The Danes suddenly became vocal as the beer took effect. Two of the Walloons, suffering the same motivation, stripped down to their underpants and began rehearsing their own special escort for the riders when they came.

The walk down to our bikes was chaos. The caravane, its passengers not so happy now, weaved through the crowds at high speed, showing no regard for those on bikes or walking. Gendarmes and other motorcyclists flew past. I was surprised to only see one injury, a woman sat on the verge bleeding from her head. At the bottom even bicycles couldn’t filter, those on foot picking their way gingerly between wheels and hot exhausts. Despite the sweaty leathers, I was happy we’d left the bikes at the bottom. 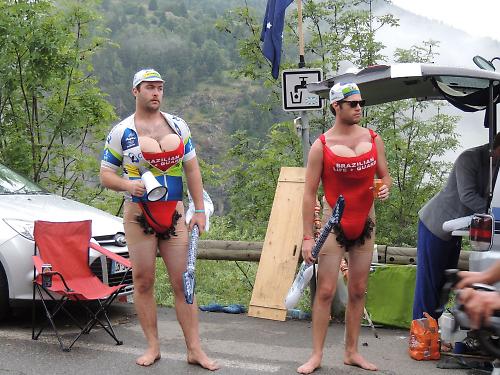 The vanguard of press and police motorcycles flew past. Again the deep, primal roar from Dutch Corner echoed up the hill. Louder this time, the volume affected, I’m sure by beer consumption. Van Garderen’s a different man this time, a grimace revealing fatigue and the stress of trying to save his Tour. Forty seconds down, Riblon is still behind, also suffering, though it’s clear from something in his eyes, he’ll catch the carrot dangling tantalisingly ahead of him.

A couple of minutes behind, the real war was simmering. Porte led Froome, both busy on their radios, past us. The remaining GC riders were still biding their time, about to explode. The rest of the race passes in dribs and drabs. There is nothing light-hearted about this passage; every rider is on his limit. Some grimace, some are wide-mouthed, but all the eyes are lifeless, exhausted; the thousand yard stare of someone who has been too far or seen too much. The Tour de France is a huge event, and you may think that watching on TV is the best way to keep in touch with what’s happening on the road. But visiting is an experience every cycling fan should have. With the Tour coming to England in 2014 why not start planning your trip now, or check out the whole route when it’s published on Wednesday and take your Tour de France experience somewhere slightly more iconic, if not exotic.