How to make a pair of Northwave shoes

We visit Italy to see how it's done...
by Mat Brett

Italian brand Northwave is 20 years old this year so we paid them a visit last week to wish them a happy birthday, check out next year’s range and take a look around their place in Onigo, near Treviso.

Northwave started out in 1993 making mountain bike shoes, but soon expanded into the road market. Since then, their shoes have been worn by the likes of Mario Cipollini, Tom Boonen, and Philippe Gilbert, along with Team Leopard Trek and then Radioshack Nissan Trek. 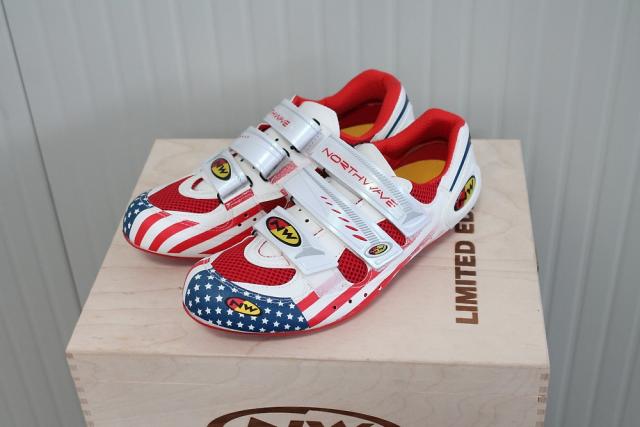 Shoes still make up the majority of Northwave’s sales but clothing also accounts for a big chunk, along with accessories and sunglasses. The brand is about to launch into the helmets market too. And alongside all the bike stuff, Northwave is a major player in the snowboard world too. 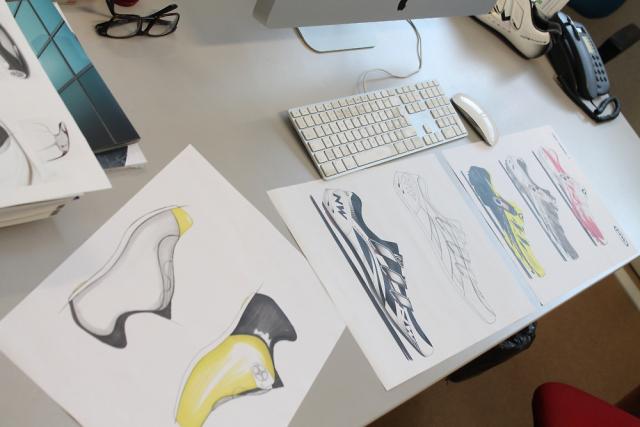 All of the manufacturing was originally done in Italy, although most is now outsourced to the Far East in order to keep the prices competitive. But Northwave still design and make all the prototypes here in Onigo. They reckon they can sketch up an idea in the morning and have a prototype shoe ready to ride by the end of the day. Then they can get feedback on the shoe very quickly and make any tweaks that are necessary without waiting for international shipping.

Northwave also produce custom shoes for their pro riders here – not that all of the pro riders need custom shoes, some go for stock options. It’s useful to have this facility because the Europe-based pros can visit quite easily if they need to.

We’ll show you the process involved in making a cycling shoe, in a Look and Learn style… 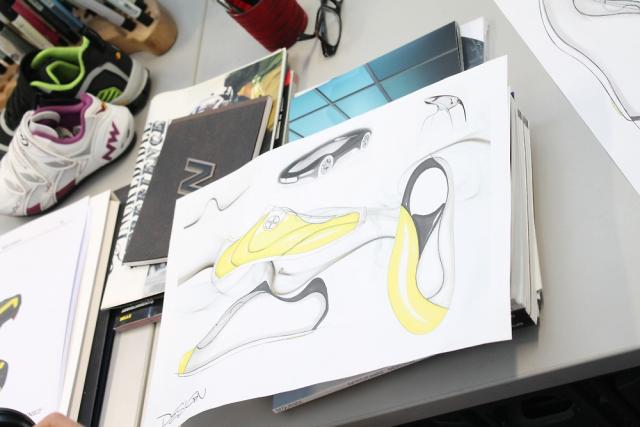 First of all, there’s the design process, and that starts out with freehand sketching with pen and paper. This design, for example, has been inspired by the shape of a sports car – although you’d do well to deduce that from the finished product. The shape, features and overall look are worked out at this stage. 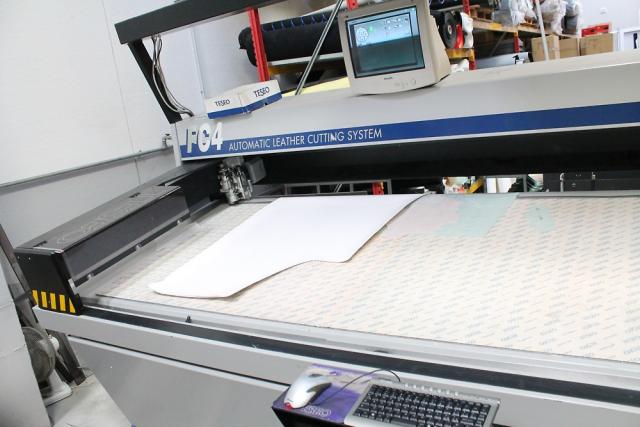 The cutting is a computer-controlled process. The pattern is fed into the computer and the cutting machine cuts out the shoe panels from large sheets of material. Sometimes the shoe’s graphics are printed on the material, but sometimes they aren’t. If it’s a prototype, that’s not always required. 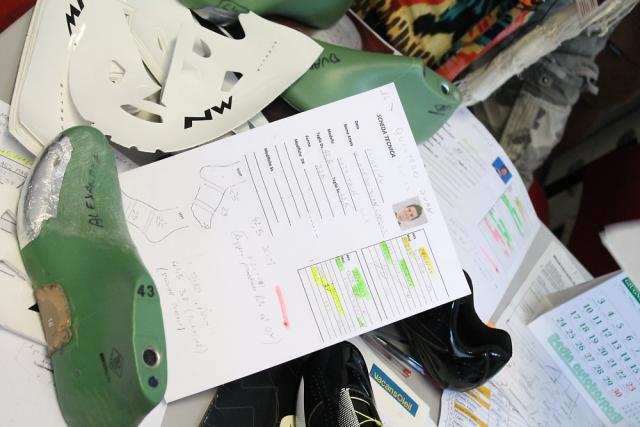 Northwave’s professional riders have both feet measured and then have standard lasts adapted to the same shape. 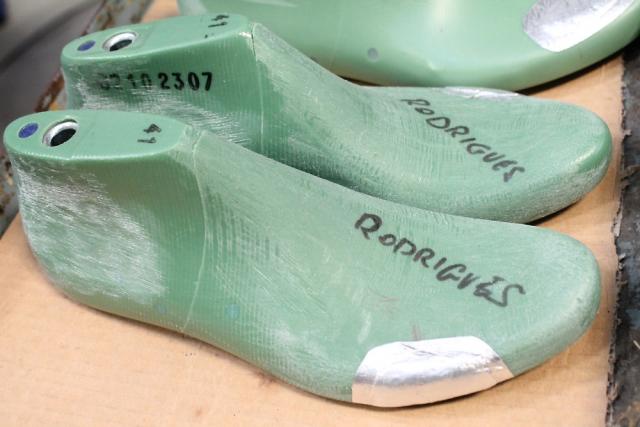 So, a rider’s foot shape might be close to Northwave’s usual size 41, for example, but a bit wider in the forefoot, so material will be added there. The rider’s custom footwear will be made around this modified last. 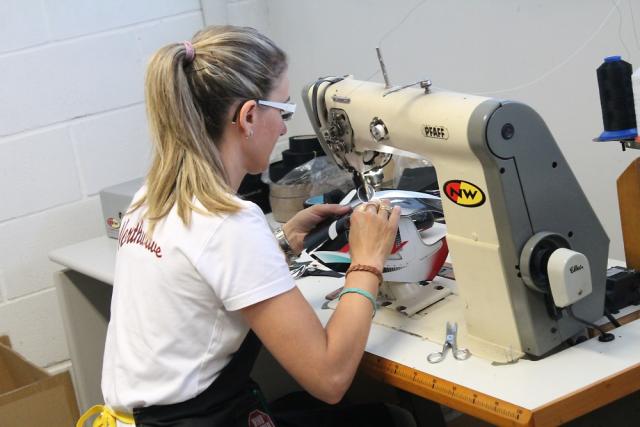 Although mesh panels are heat-moulded into place, various sections of the upper are joined on a sewing machine. 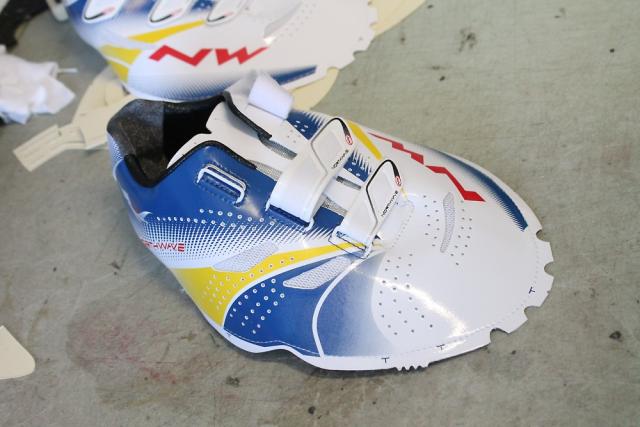 The inner and outer panels need to be stitched together, for example, and the closure system components added. 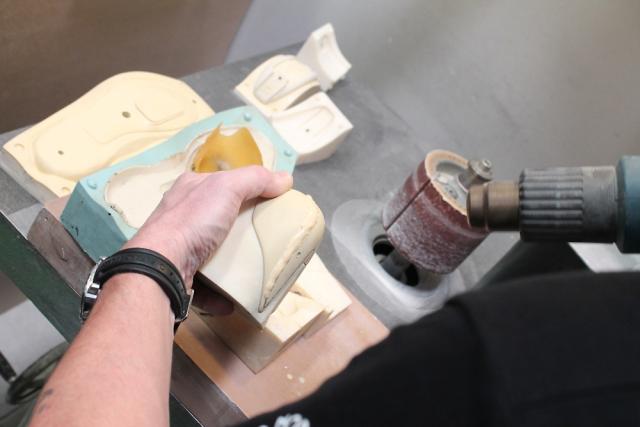 When working on prototypes, Franco produces the parts that will eventually be nylon, glass fibre and carbon sections in his workshop. Here, for example, he’s making a heel cup from resin. 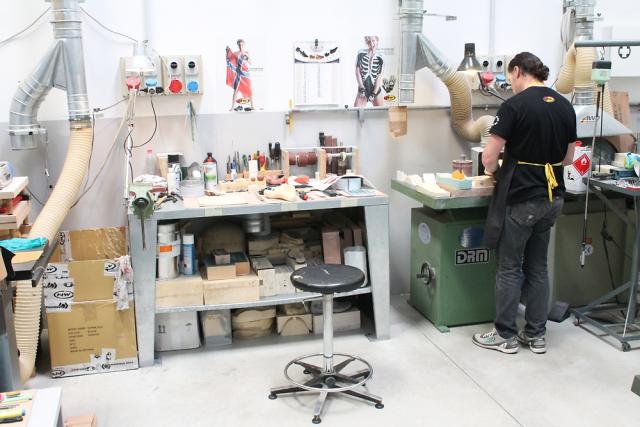 It’s the same sort of stuff that’s used in car repair body shops. He has all types of tools for producing the final shape, plus extraction fans to take the dust and fumes away. 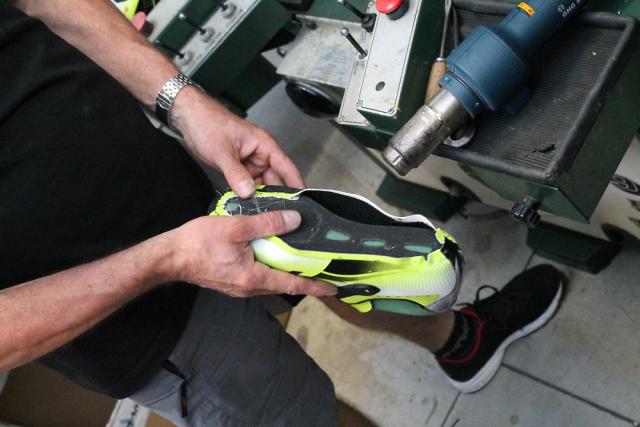 Next, the upper is heat-moulded around the bottom of the last and bonded in place. 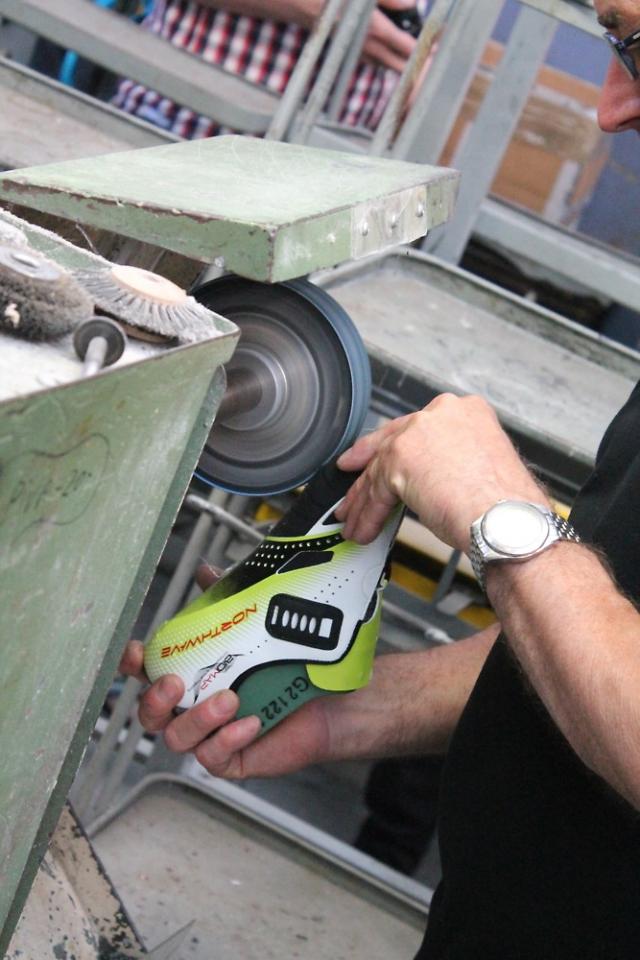 All the excess glue then gets removed by a sanding machine to give a flat contact surface with the outsole. 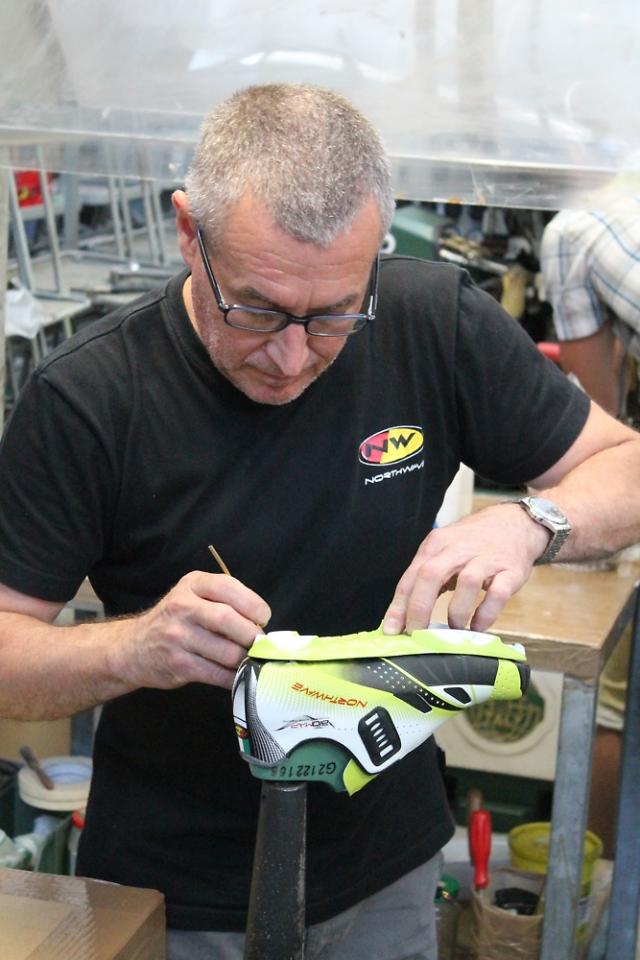 Then the outsole is put in place and the area it covers is marked. Two layers of glue are applied to the bottom of the shoe and another two to the outsole – with 24 hours between each of the two outsole layers – before the two parts of the shoe are stuck together. 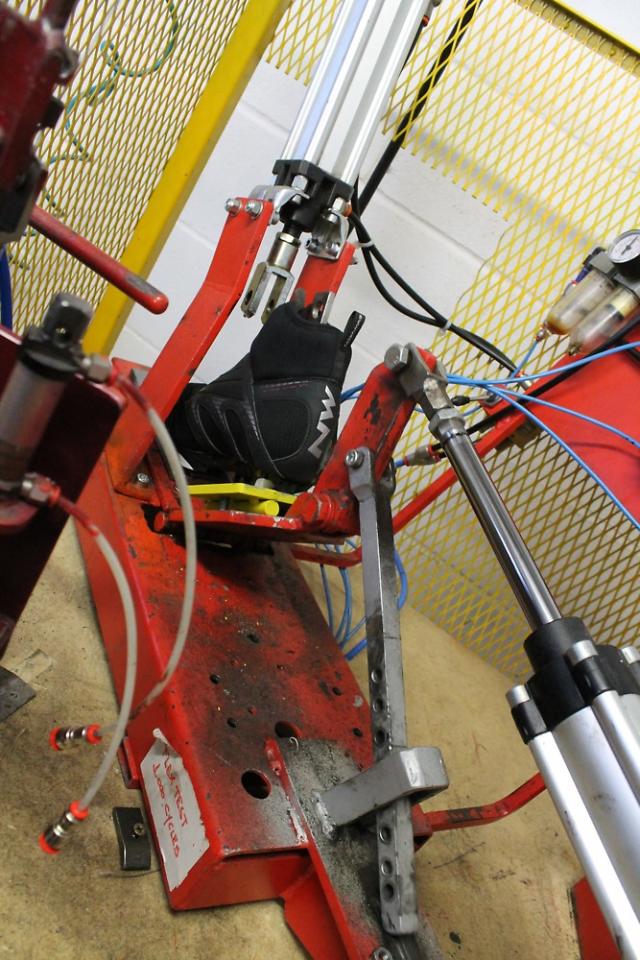 Lab testing is a big part of the design process. These shoes are being repeatedly flexed by machine to check their durability. The cables used for closure systems and all buckle components undergo similar tests to find out how they’ll cope with long-term use, and the same goes for zips on clothing. 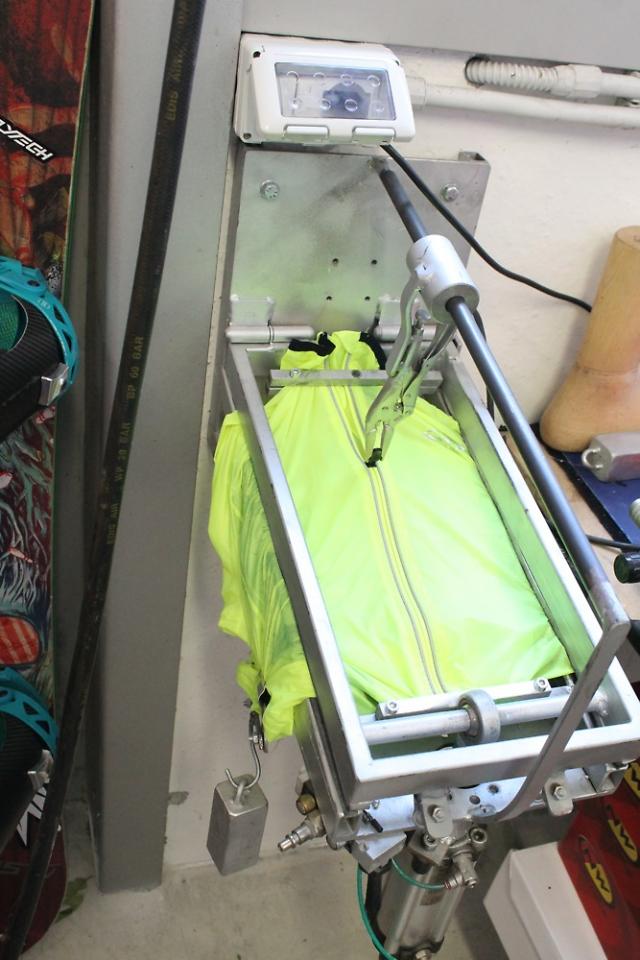 Once the prototypes are sorted, the guys from Northwave travel to wherever the item will go into production and set up the quality control there.