Full Windsor is London-based bicycle accessory company that takes its name from New Zealand born Mark Windsor. His first product was the Quickfix rear mudguard and he followed that with the more ambitious The Nutter multitool.

They’re both uniquely designed products, but the really interesting part of Mark’s story is how he is one of a growing number of product designers to have embraced and utilised the crowd funding service Kickstarter. road.cc met up with Mark a while ago to have a chat about designed bicycle accessories and crowd funding. Where did it start?

I’ve always been in the design field, so I guess I made the decision to do something I’ve always enjoyed: a love for bikes. It was just common sense. I’ve worked at design agencies where I’ve had the skillset to do pretty much anything. Once you learn the process you go through, you can apply it to anything. So I thought I may as well apply it to something I love.

Where did the idea for your first product, the mudguard, come from?

It was the old thing of spotting an opportunity with the mudguard, which was to cut up a bottle and wedge it between the seat stays, like everyone else was doing. So I thought we could continue this into a product idea pretty easily. I had worked with origami, made bags before and worked on living hinges, and I thought I could apply that thinking to the mudguard. So it was pretty easy after that. It took about 200 prototypes and six months of playing with bits of plastic to hone the final product. 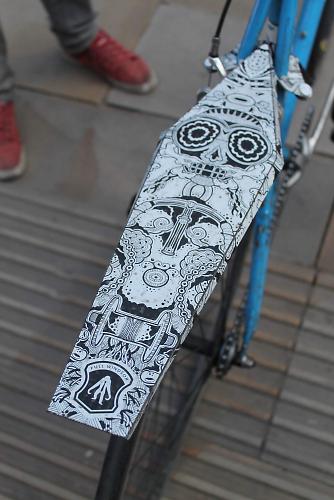 So it was a case of solving a problem you faced as a cyclist, and employing your design skills?

Exactly. It’s a pretty simple solution, really. The hardest part is that there's so many variables with bikes. Different frame shapes, geometry, and everything. So I don’t think, with a product like this, you could get it to work with every single bike, from a Dutch bike to a track bike say. I got it to a percentage where I was happy with it, working with dual seat stays and caliper brakes. It works with about 70% of the market.

What was the time span from eureka moment to final production?

About a year. From playing with early samples, getting the idea just right, and doing that while keeping down a full-time job. 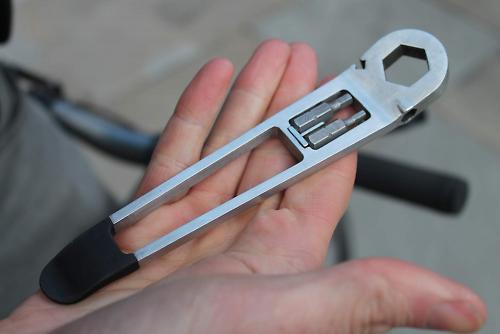 And Kickstarter has been instrumental for you?

Not with the mudguards, not to begin with, but I did use it to launch into the US. At that time, Kickstarter was only available in the US, and it’s a totally different market, so it was a perfect way to launch it over there. I used it as a launch pad really.

I already had had a bunch made in the UK. I had realised there was a market for it from taking it to shops. So I was using UK manufacturers, then used Kickstarter to do a large production run, using the money to take production from 500 to 7,000.

You had a good reaction on Kickstarter then?

Yeah, it was all positive feedback. I think the hardest thing launching a product is that you work in a bubble. You get very narrow minded. As soon as you show to a larger audience, it confirms there is a need for it. It’s always going to be a small niche, but I think that’s the exciting thing about small brands. You get a strong following from a small band of people. You get the most loyal following.

And that led into your second product, the multitool?

That’s been a year in development. There were about 10 prototypes. The first five were laser cut in the UK and using a milling machine. The very first prototype was handcut in card. I wanted to broaden out to appeal to a larger part of the market - road, urban, mountain bike - with the multitool. It appears to be a far more ambitious product design?

Yes, and that’s where Kickstarter helped out. I didn’t have the funds to do it. Without Kickstarter I would have had to get an outside investor and that means giving away equity and reporting to someone else - something, to be honest, I’d much rather not do. What Kickstarter does is let these individuals fund it, the end users. If they’re all buying it and all like it, then you don’t need an investor to come along and tell you what to do.

And the advantage for the people pledging on Kickstarter is they’ll be the first people to get the product. And they learn along with the process. They’re the ones making it happen and are involved from the beginning. With cycling being a close-knit society, it’s a no-brainer.

The other thing is, with design you can get sidetracked from reality. If you put a product on Kickstarter and get no interest, you can cut your losses and not go further with that product. A lot of people that fail don’t do so having first spent £30k developing a product.

What’s the production run plan for the multitool?

Kickstarter is getting more popular, and seems to be giving birth to a new breed of product designers?

Yes. It’s fantastic getting feedback straight away. More than just funding, you’re getting product developing at the critical development stage. There’s been tons of people emailing me about changes, suggestions and so on. It’s good to see that other people are using it as well.

With Kickstarter, if a product succeeds, it’s the end users telling you they want the product, not an investor deciding if there’s a market for a product. Every single day I’m talking to the people I’m selling the products to. To be able to speak to the end user like that would have been unthinkable 10 years ago. Here, the end users are speaking to the designer, the person who sells it, not through a marketing team or some such. There’s a size at which that becomes unfeasible, of course, but for me it works. What’s the plan going forward then?

I don’t want to be a company that just sees a market demand and then responds. I want to be a designer first, leading with innovation, that leads the industry forward. Design is so important. In the cycling world people really care about their bikes when they see innovation they’re passionate about. I’m not about the mass market. As long as there's an opportunity in a niche, and there’s passionate people in that niche, I think that’s more invaluable than coming up with a product that you’re going to see on every second bike. That’s not exciting to me.

Thanks to Mark for taking the time to chat to us. You can learn more about his products at his website www.full-windsor.com