Charge! Cycling the End to end on an e-bike

We were pedalling through Cheddar Gorge – more specifically up it – on our way from Land’s End to John o’Groats, and it seemed remiss not to remark on the majesty of the towering rock faces surrounding us.

The man I was overtaking, who was puffing considerably, evidently felt differently.

I rode on to the tune of the gently whirring motor. If ever there were a reply to the question, why e-bikes?, surely this was it.

I’d just passed an older lady shaking with the effort of the climb. I couldn’t help but feel I’d got the better deal. 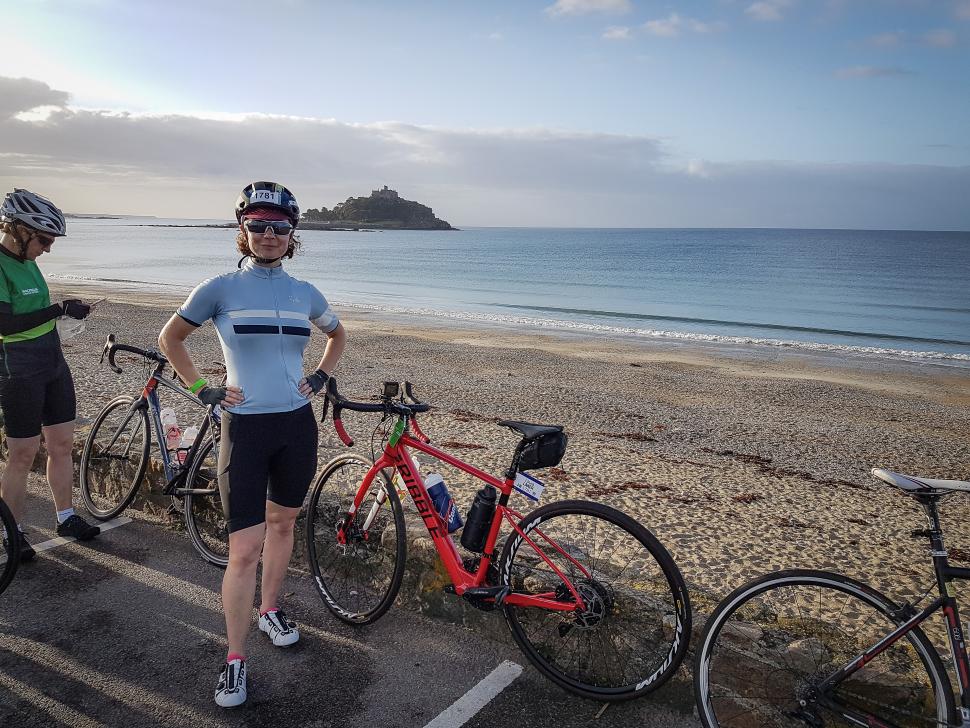 I was cycling LEJOG with the Deloitte Ride Across Britain event, the giant and phenomenally well organised annual sportive, which my colleague Tass also completed this year, and covered for road.cc. I was one of just two people out of 800 on an ebike; the organisers were considering it an experiment*.

For me it was an experiment born out of despair. Around ten weeks into training I had a dark weekend of the soul and decided I’d either have to ride the nine-day, 980-mile event by e-bike, or not at all.

Cycling is something I do for fun, the bicycle a tool for adventure. For me this means enjoying the journey and minimising the pain and discomfort. I basically wanted to have a nice bike ride, and make it from one end of the country to the other without hurting myself. It felt like an e-bike would make this possible. And, spoiler alert: boy, did it.

It also showed me what e-bikes are capable of, and what they can help us achieve. 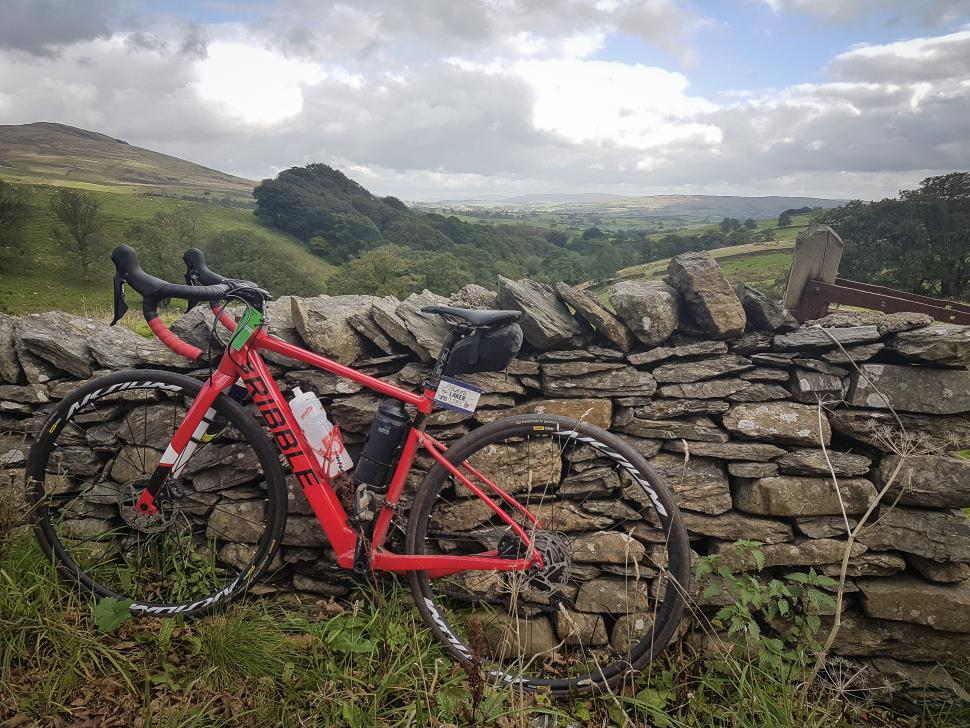 Ribble cycles kindly loaned me their CGR AL e, along with a range extender, a second (5kg) external battery, in addition to the internal down tube battery, which attaches to the bottle cage mount on the seat tube. The battery would last each day, Ribble told me; but I’d need to re-charge it each night.

The truth was, when I set off, I really didn’t know what the bike was capable of, range-wise. Thanks to bad planning, I’d only ridden it 50 miles to Kent, once. This emptied the range extender – in theory, half of the combined battery power, which was worrying because my average mileage would be 108 miles a day, and on the longest day I’d need to get 120 miles out of the setup.

Ribble assured me the power spikes needed for my stop-start ride out of London had done it, and that on a continuous ride, its combined battery power would last.

I only knew if I ran out of juice I’d be pedalling a very heavy bike, and being a light rider, with a fairly measly power to weight ratio, this would be a problem. 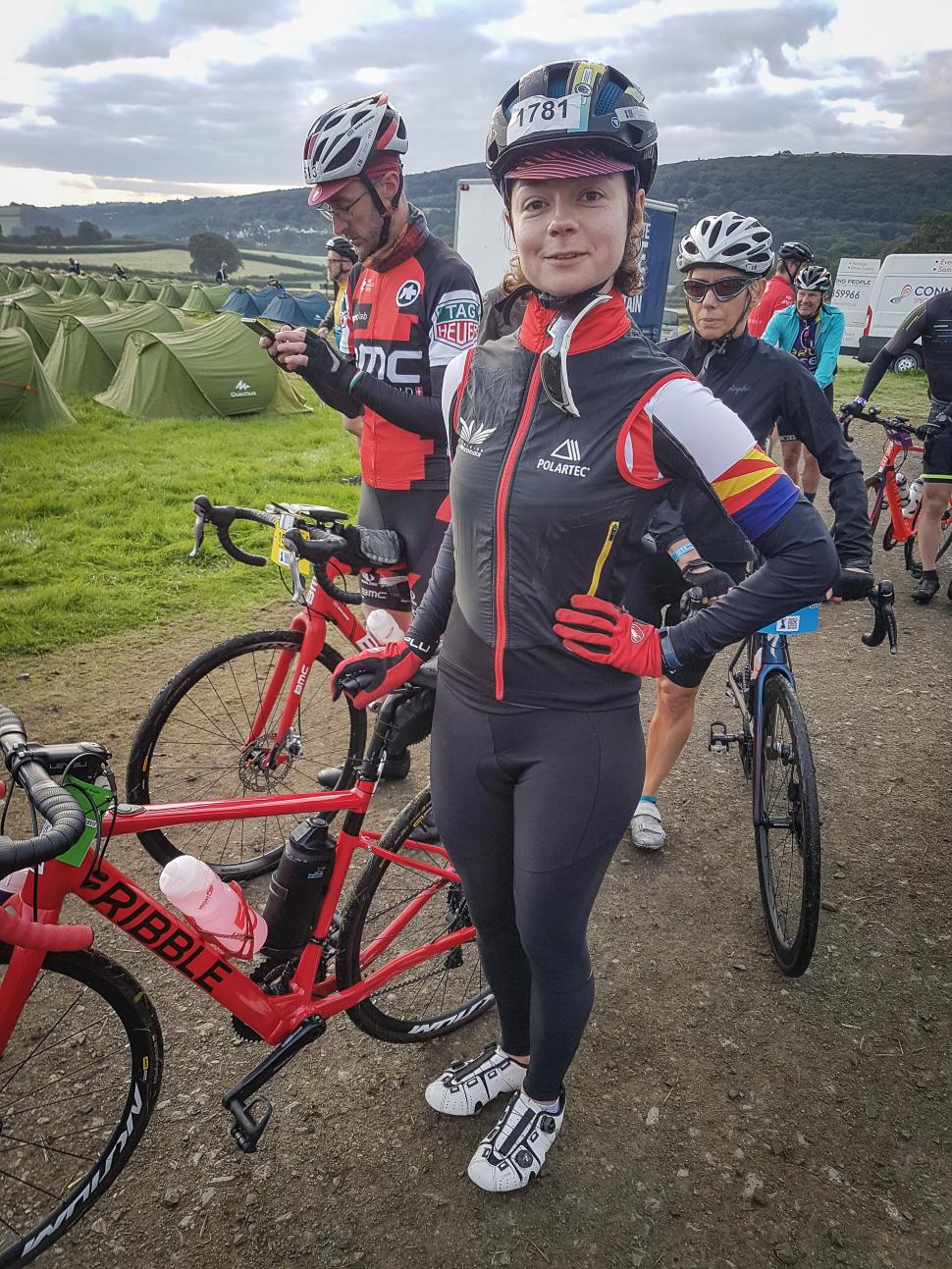 Luckily, as well as the bike’s three main power settings, selected via a single, subtle button on the top tube, there’s an app (ebikemotion), for finer power adjustments. I had the bike on the lowest of three settings on that first ride, but the app’s power bar at a default 100%.

Setting out from Land’s End on the first cool, bright morning, I dialled it down to 75%, then after a bit less than half the ride, on a hill somewhere (in Cornwall there are a lot of steep hills), the range extender already showed empty on the app, so I went to 61% and pedalled a bit harder.

Halfway through that day there were warning notifications from the app, and the power started cut out at random. Thankfully it was a loose cable connection between the battery and motor, on the chain stay, which was easily reconnected and the plugs holding the cable in place on the inside of the chain stay pushed back into place. 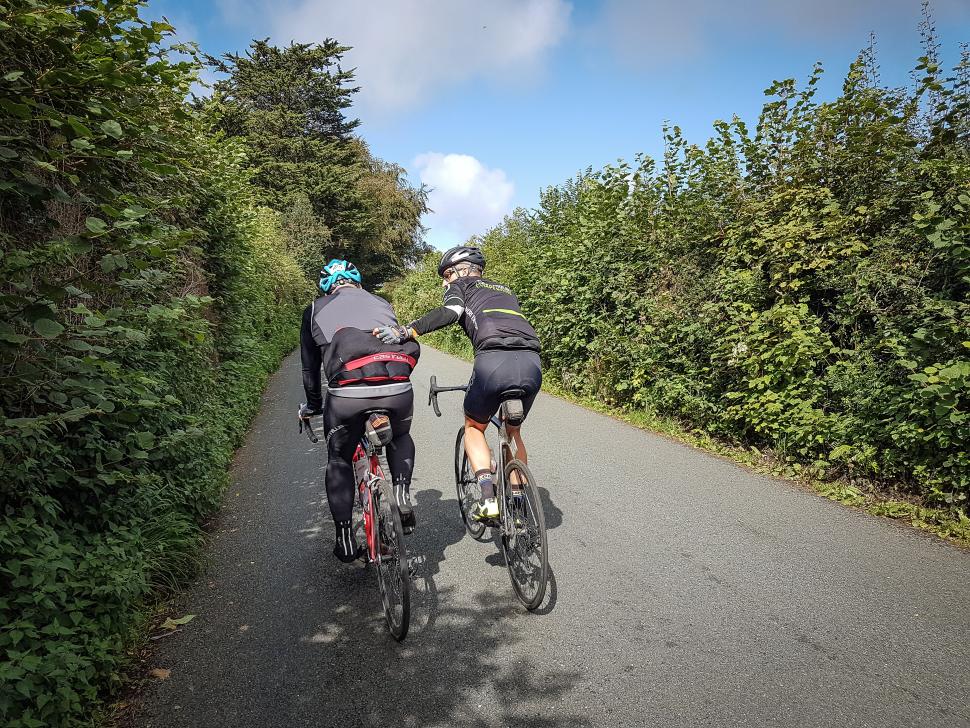 After 40-odd miles of slower going, with 10 miles left I still had plenty of juice. Throwing caution to the wind I turned it up to the middle setting, whisking me up what was for everyone else a grinding false flat into Okehampton. I tried not to make it look too easy.

Joyfully – thanks largely to luck, and blind, finger-in-the-air adjustments each day – Ribble weren’t wrong about the range. 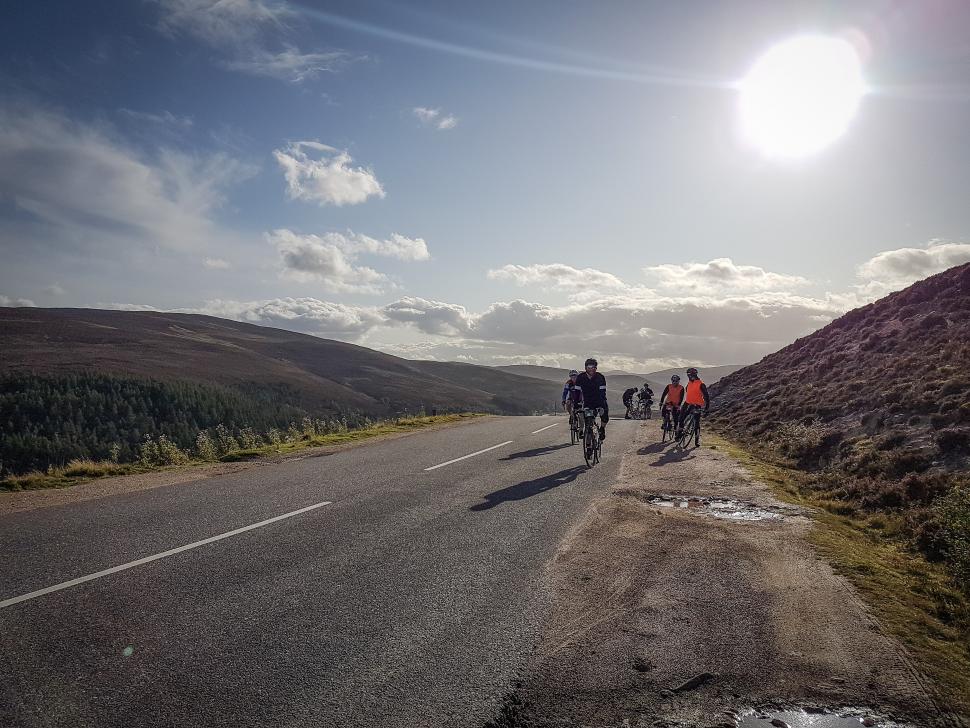 On the longest, 120-mile day, I chose 65% assist; there were some hefty climbs ahead, namely the Lecht, and the small matter of a 45mph headwind. The Lecht ascends 2.6 miles to a ski resort, with an average gradient of 6% and a maximum of 20%. That was the only time I chose maximum power via the top tube button, and still almost didn’t make it up without dismounting. The extra weight meant I didn’t get blown off the bike that day, unlike some terrified lighter riders.

There were moments of mild peril on the 120 and 116-mile days as the warning light on the top tube button flashed red near journey’s end, but it never ran out. On stop-start segments through traffic I turned the power off. I’m fairly light, at around 60kg, which probably helped too. 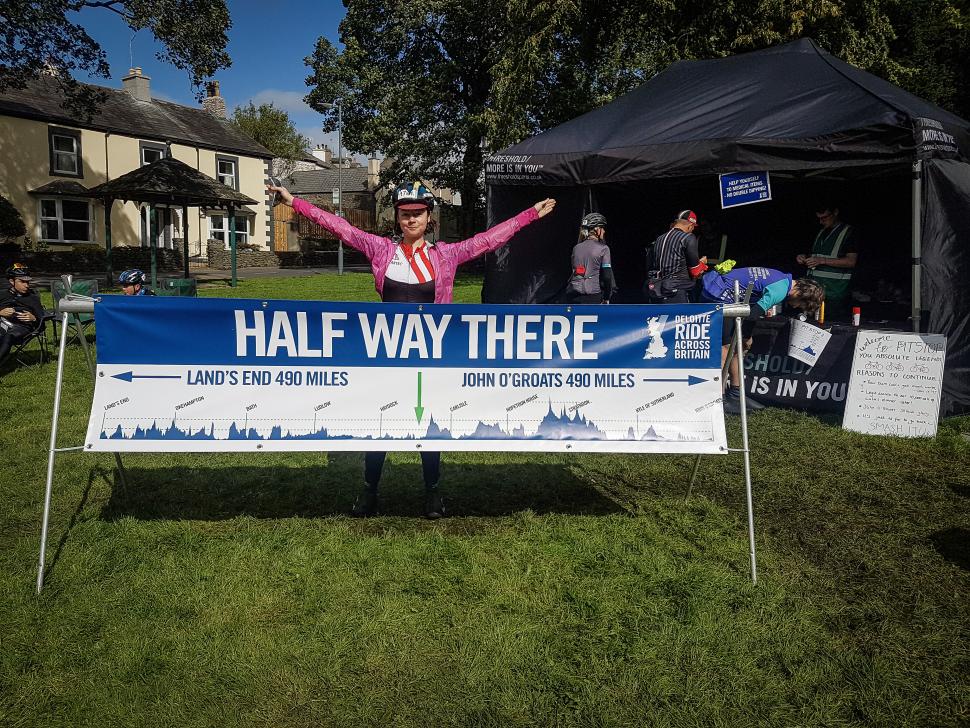 Though I was definitely working (aching particularly on my right side, the side I’d attached a water bottle cage to the fork in place of the mount occupied by the second battery), it was definitely a doable challenge – with the training I’d put in, copious stretching each day, some physio and the odd massage. It was definitely still a challenge, and there was definitely still pain. The power assist gave me a noticeable boost up the false flats and, of course, on steeper hills.

I’d hazard, judging by some of the haunted faces of my fellow participants and the occasional cries of despair, it was a lot more enjoyable. Many of them looked on enviously, and at least one with hostility, while some seriously considered getting one for themselves.

What goes up, goes along relatively slowly

There were trade-offs. One was on the flat or a slight downhill, beyond the point when the motor cuts out, at 15.5mph, it’s over to your legs to shift a heavy bike. I risked wearing out my legs trying to exceed this speed, and joining trains of faster riders was impossible – at least for my level of skill, and strength. 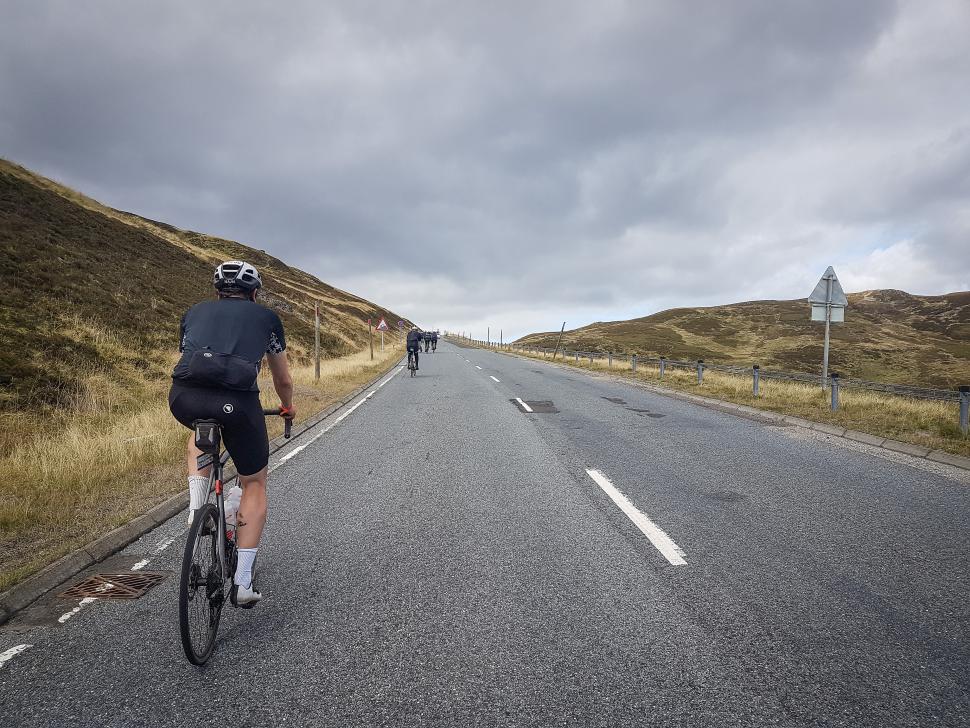 There was a big difference between 65% and 85% assist, so the longer days, with the assist dialled down, were harder from the start. Someone asked if the bike was broken; it wasn’t.

With a decent downhill gradient, though, it flies; the extra weight helps. The disc brakes were a revelation, putting me in control on descents in a way I wasn’t used to with rim brakes.

I charged the bike in a gazebo each night, begging and borrowing sockets wherever I could: in the drying tent, the phone charging area, the VIP tent; even a stairwell in a racecourse building (from which it nearly didn’t escape after someone locked the door).

I washed and re-oiled the bike after rainy days, and didn’t have a single mechanical, loose motor cable aside. The only fault was the range extender’s plastic cage was flimsy for the heavy battery and slowly fell apart, requiring copious cable ties, and moving around, but it was a prototype so no doubt later iterations will be sturdier. 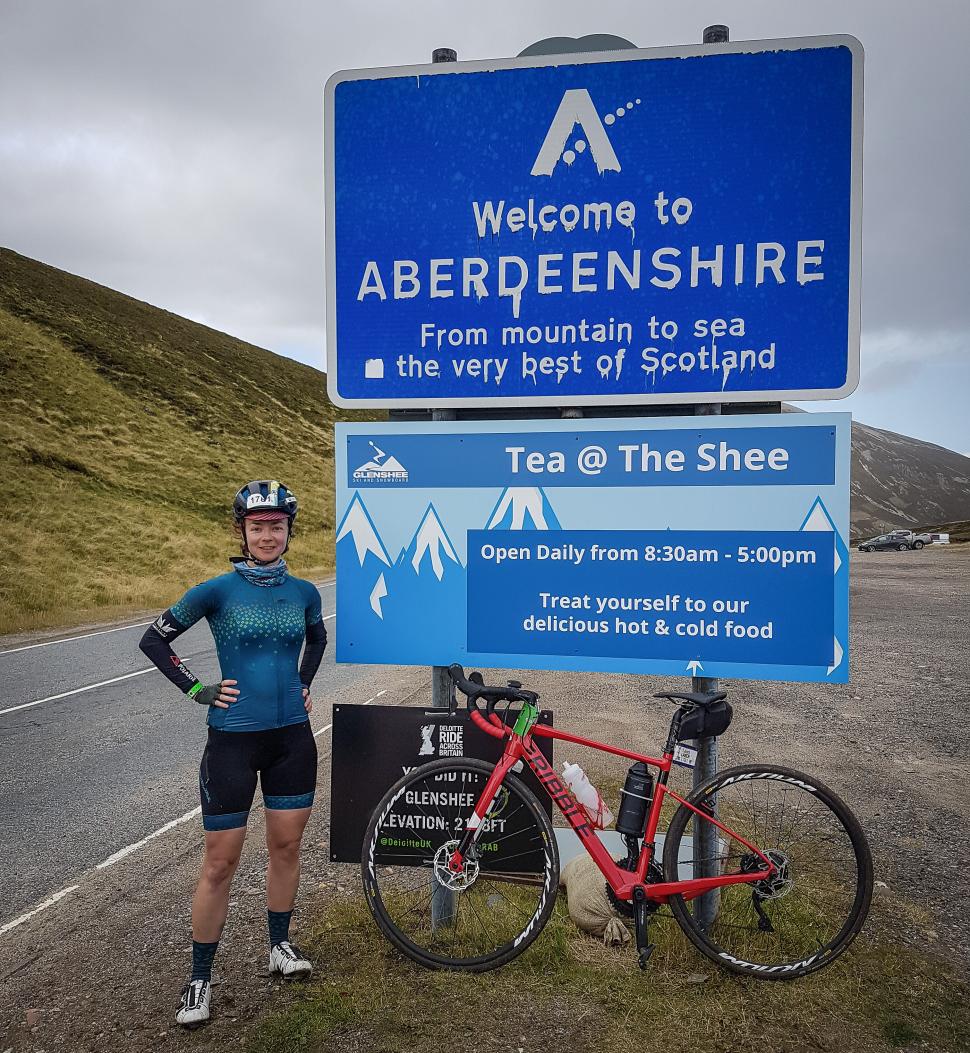 Overall, the experience was overwhelmingly positive. Importantly, it made the trip enjoyable. The Cheddar Gorge moment was repeated over and again. Leaving Bath on day three there was a stunning view as we climbed, a patchwork of fields far below in the early morning light. No-one else seemed to notice. On the penultimate morning, before the Lecht ascent, we passed enchanted-looking forests of pine. “Ooh look, fly agaric!” I yelled, to no-one in particular.

The e-bike made something possible that I might have been too terrified to do, or not strong enough. It felt like I’d levelled up. I can see how e-bikes make more and longer adventures possible for more people, and I for one have no regrets about my choice.

*Deloitte RAB organisers decided not to allow ebikes for future years, as other riders perhaps understandably feel it detracts from the challenge, and the charging logistics are tricky on a large scale. I rode a Ribble CGR AL-e in a Shimano 105 build. The CGR Al-e range begins at £1,899 for a Shimano Tiagra build; the bike I rode retails at £2,299. The bike uses the ebikemotion X35 motor system with an internal battery in the down tube and a rear hub motor. The range extender battery, which attaches to the bottle cage mounts, is an optional extra at £550, bringing the total bike cost to £2,849. 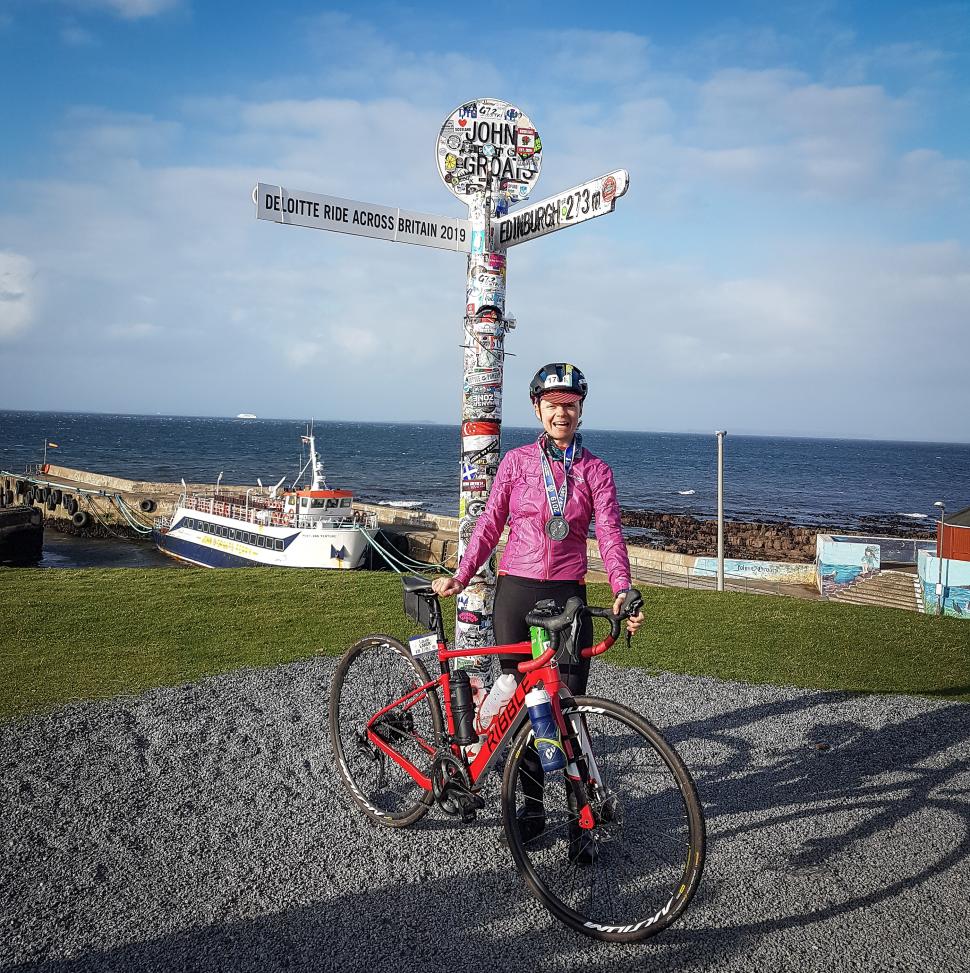