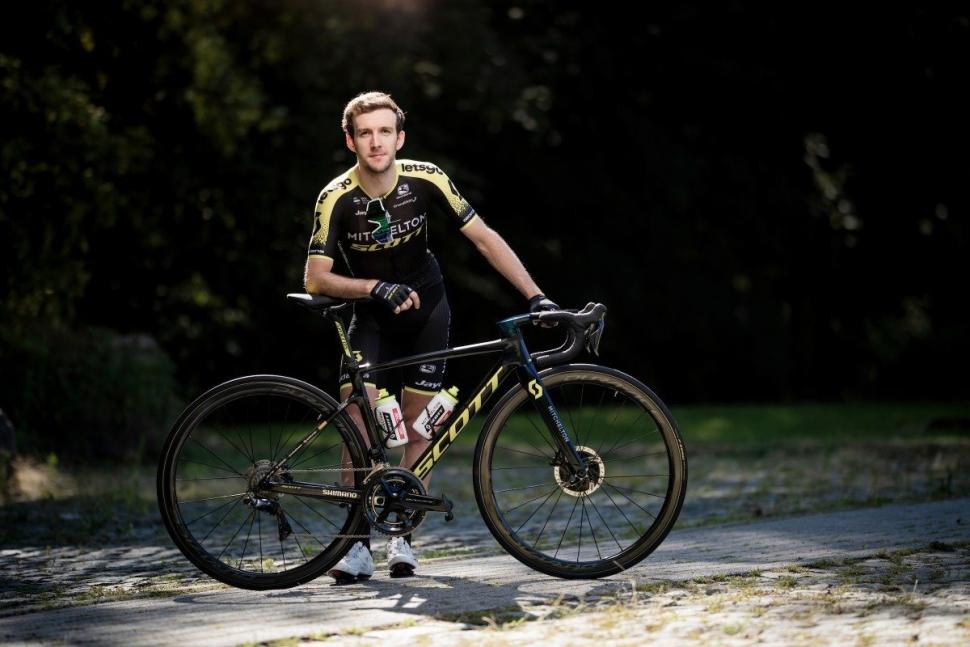 The Addict RC was launched less than a month ago. It is a bike with a focus on aerodynamics and integration while maintaining the low weight that the Addict has been known for since it debuted in 2008. 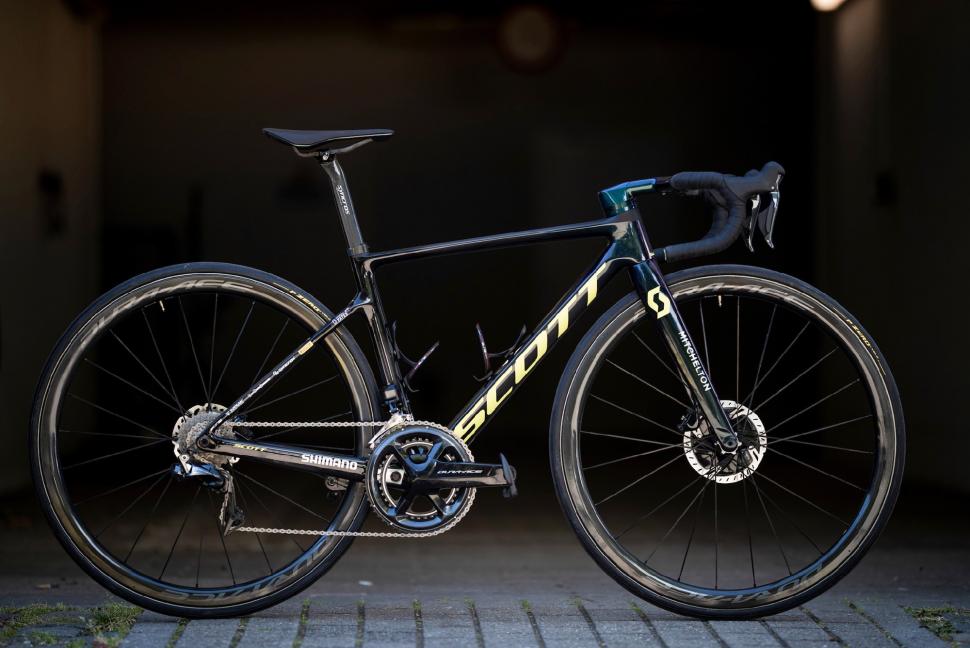 The key feature is the new handlebar and stem that provides full internal routing for electronic and mechanical shifting. It's a disc brake only design.

The new Addict RC comes with a new Syncros handlebar and stem (Syncros being Scott owned). Actually, there are two: the brand has developed both a one-piece all-carbon handlebar/stem as well as a two-piece setup. Yates has gone for the Syncros Creston iC SL combined version here. 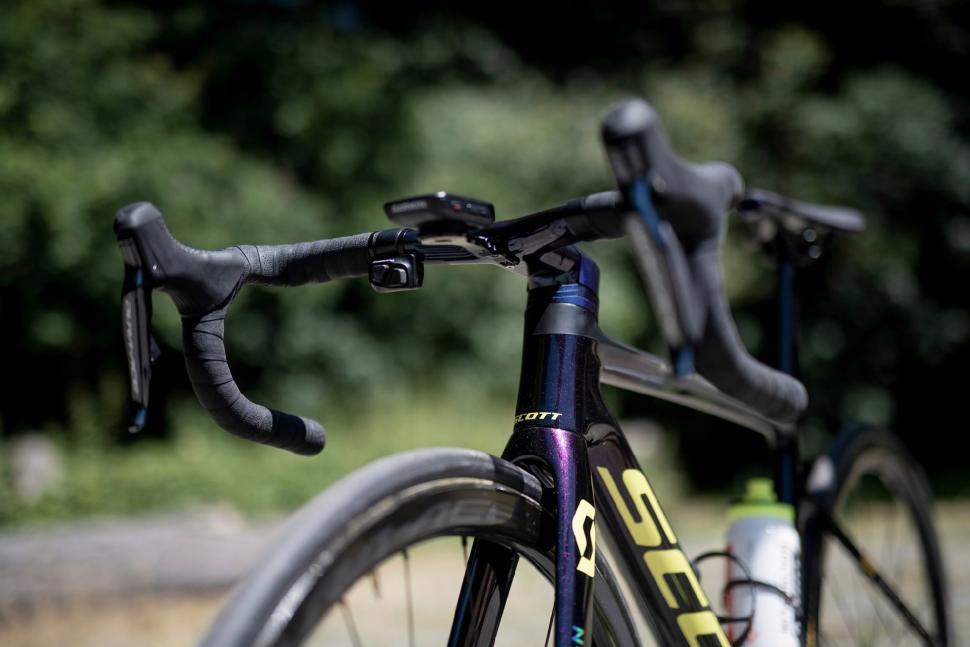 The brake hoses and Shimano Di2 gear wires feed into the handlebar/stem and are taken internally into the frame. They enter the front of the enlarged head tube. Scott calls its new head tube and steerer tube the “Eccentric Bicycle Fork Shaft”. The design will also take mechanical gear cables, although Mitchelton–Scott use electronic shifting only. 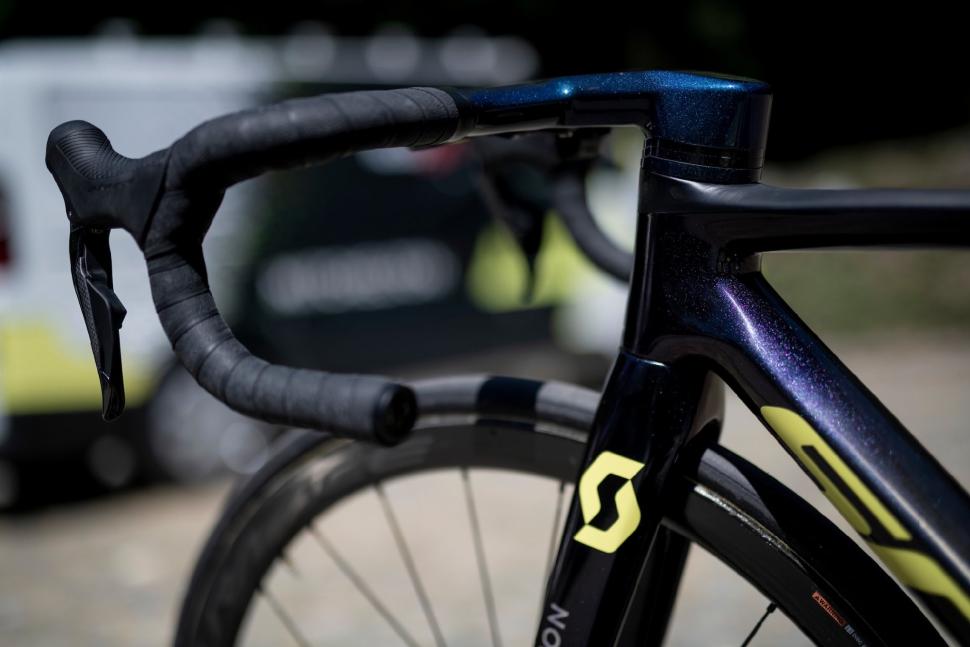 The bar also has an ergonomic shape and bend that has been developed with Gebiomized of Germany. The tops are ovalised while the drops have a compact bend with a 2° flare.

Want some stats? Scott says that the full-carbon one-piece handlebar used by Simon Yates has a 26% improvement in sprinting stiffness and a 27% increase in compliance compared to its previous handlebar. 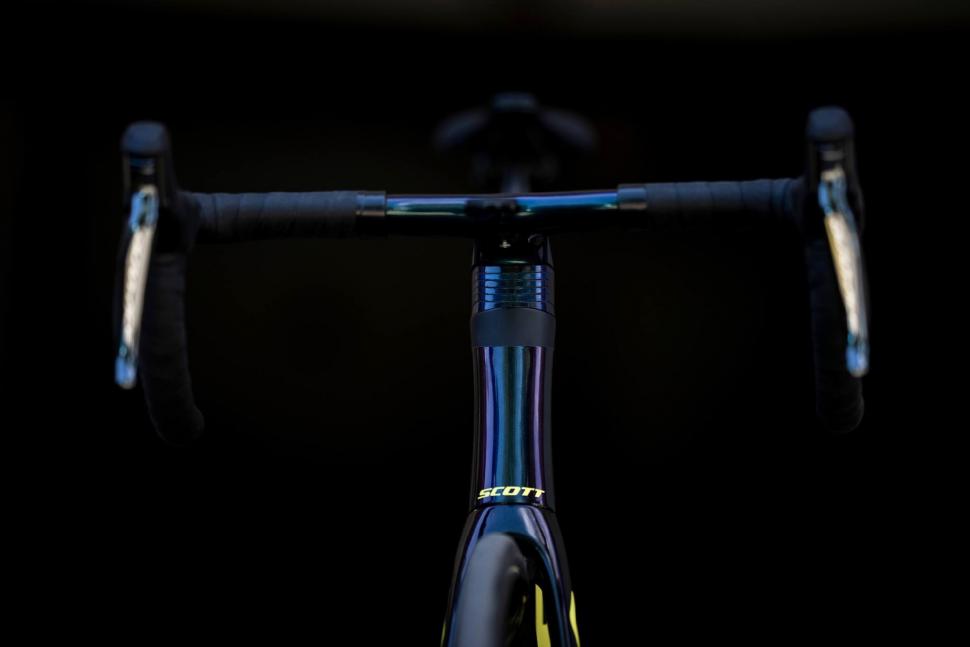 Yates goes for a three spacers underneath the combined handlebar/stem to bring the front end up a couple of centimetres, and he has a satellite shifter fitted so that he can change gear while his hands are on the tops when climbing. He has the buttons pointing forward so that he can operate them with his index finger rather than with his thumb.

Scott has also focused on aerodynamics with the Addict RC, using its own patented airfoil tube shape for the down tube, head tube, seat tube, seatpost and seatstays. Those seatstays have been lowered (the junction with the seat tube has been moved a little closer to the bottom bracket) to reduce the gap behind the seat tube. This avoids air stagnation, according to Scott.

The result is a reduction in drag that's the equivalent of six watts at 45km/h (28mph) compared to the previous Addict. 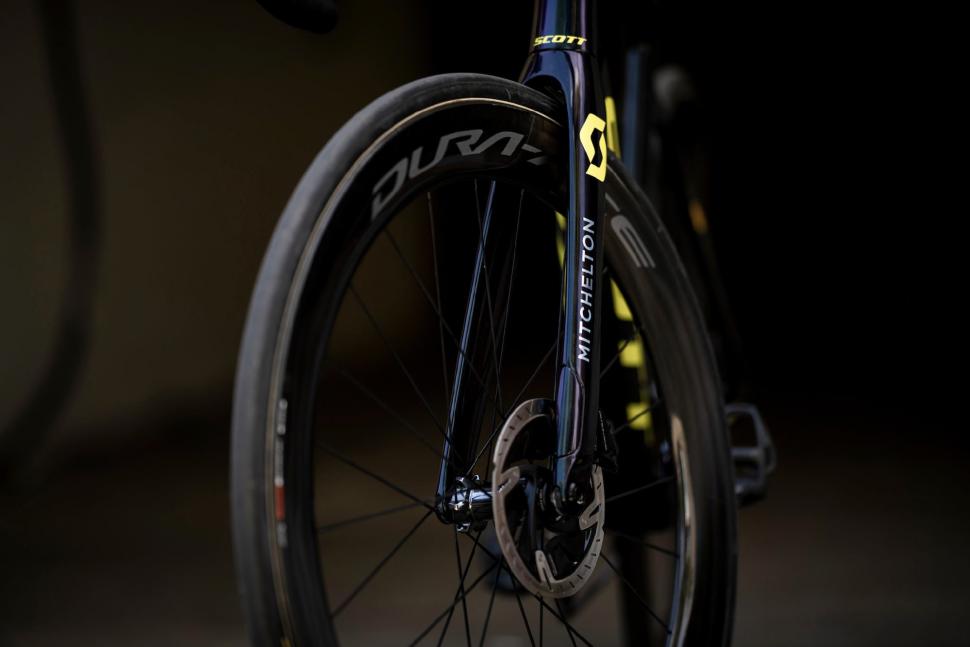 Scott revised the layup of the ultra-high modulus carbon, creating a “stiffness backbone” that it says increases bottom bracket stiffness. It has also reduced the number of bonding joints to reduce weight, making the frame out of three parts instead of six.

Mitchelton-Scott riders use Shimano Dura-Ace Di2 groupsets, including Shimano's chainset-based power meter. The wheels are from Shimano too. These are Dura-Ace C40s on Simon Yates' bike, fitted with Pirelli P-Zero Velo tyres.