There was far more to the new hour record of 55.089km than simply pedalling really fast. Here we take a look at the bike, kit and gear Campenaerts used on the day to give him every advantage possible...
by Jack Sexty

While his engine is to be congratulated the most, the bike and equipment that Victor Campenaerts used to crush the UCI Hour Record, plus his meticulous preparation in the build-up, played a vital part.

Campenaerts' bike sponsor Ridley have shared plenty of details, and charted aspects of his preparation including a strict core stability/yoga regime and travelling to Namibia to train. We've covered the bike Campenaerts used in detail already (read about it here) so here we'll delve into the other dots that the Belgian joined up to hit a total distance of 55.089km at the Velodromo Bicentenario on Tuesday... 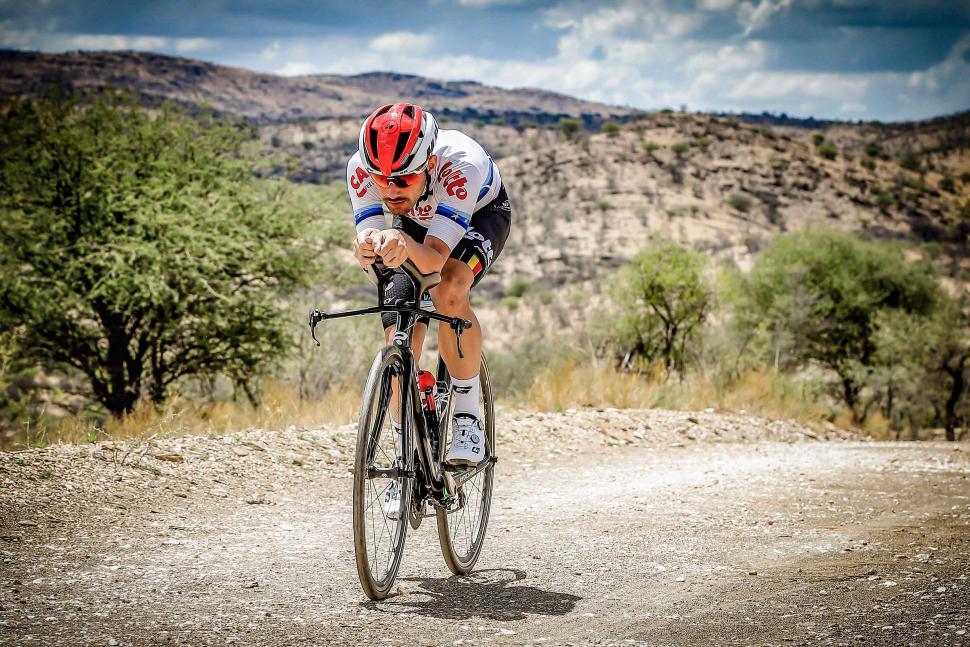 Campenaerts took time out from regular training with his Lotto-Soudal team, embarking on a programme specifically tailored to breaking the Hour Record. Part of this included travelling to the less-renowned cycling destination of Namibia to train. At 1,730m above sea level it's at nearly the same altitude as the Velodromo Bicentenario in Mexico at 1,800m, and the heat also helped condition his body. Prior to the attempt he said: “Thanks to having trained in 35°C I have increased my blood volume and blood plasma which will improve the oxygen flow to my muscles and ultimately my performance. Thanks to this preparation I’ll be comfortable in those circumstances.”

The time zone is also the same as Belgium's, so it meant no jet lag or time adaptation needed when he travelled to and from Namibia.

Campenaerts also worked hard on his stability and core strength, performing specific exercises in order to help his body to hold a very aggressive time trial position for 60 minutes: "Doing a TT requires such a specific position. It’s important to be able to hold that ideal position while sitting as stable as possible. That’s why I do specific muscle training.”

"Is it useful to train every muscle? Of course not. Training quadriceps extensively is something sprinters do. My gains would be too small to put in so much effort in those exercises. That’s why I train my shoulders and my back. Both are being put into such a specific position during a TT, they have to be 100% ready for the job.”

Yoga was used as a wind-down activity to get rid of the adrenaline after a long day's training, sticking to an easy and relaxing programme so as not to overload the joints on top of stability work.

5 am roller session. Using blue light to lower my melatonin levels. Waking up my mind and body! . . @facepeeters

Campenaerts was rising at 5am and going to sleep at 8pm in the months building up to the attempt, and in this Instagram post is using artificial blue light to lower melatonin levels. 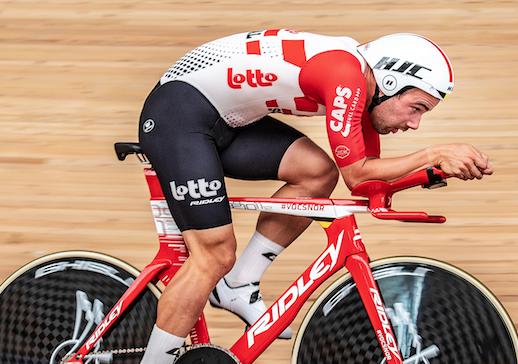 Interestingly, Campenaerts opted to use his custom-made HJC Adwatt TT helmet without a visor. Not only did this keep him cooler, wind tunnel testing and a 3D head scan also shown he was faster without one: “It’s very specific to me. As opposed to Tiesj Benoot, who is faster with a visor, my aero performances improve without. On top of that it offers me better cooling conditions, because you loose a lot of heat through your head.”

While he could have used a long-sleeved skinsuit, Campenaerts again opted for a small cooling and comfort win by sticking with a Vermarc short-sleeved skinsuit. He claims testing shown that the aero differences between sleeves or not in the lower arms are very small, so it would have made very little difference. About six minutes into the Youtube live stream of the attempt, we also spotted an assistant spraying Campenaerts' exposed skin with what we think is some sort of body glide; we're awaiting confirmation from Ridley to find out exactly what it was. 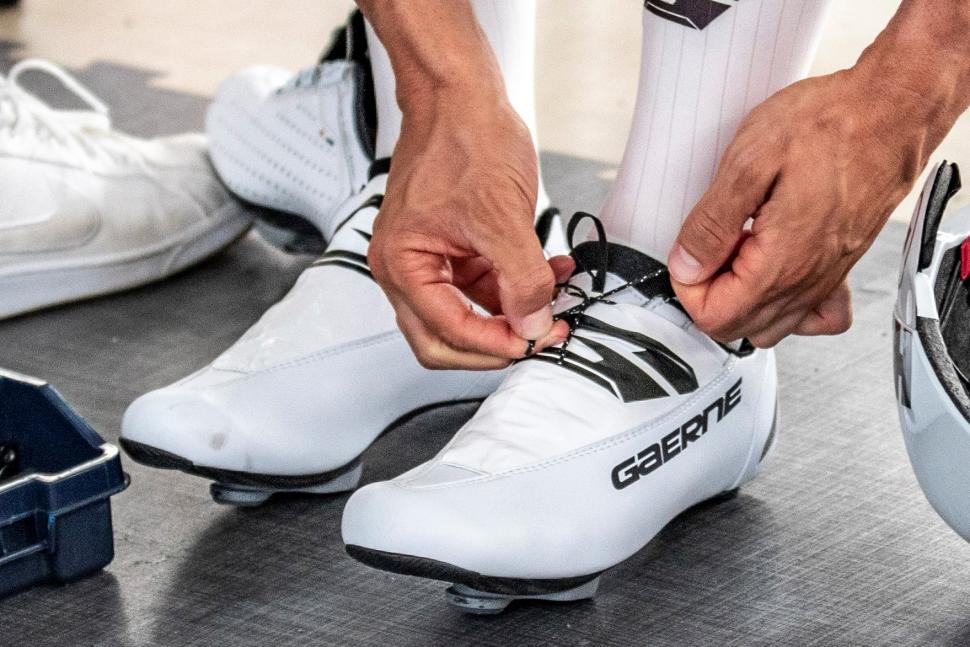 Shoe covers are banned according to UCI Hour Record Rules, so Campenaerts opted for a pair of custom Gaerne shoes with a lace fastening underneath the rubber. It's claimed that when tested, the shoes were shown to be even faster than regular road racing shoes with covers. He also used aero socks from Gaerne.

Another choice Campenaerts made in favour of comfort and cooling over miniscule aero gains were his hands, opting to ride without gloves: “Aerodynamically the advantage of gloves is minimal. But it’s also a choice in favour of cooling conditions. Veins are running superficial around your wrists, so you’re able to lose a lot of heat there.” Campenaerts' 'Flying Moustache' track bike (actually a modified Ridley Arena TT frame) was perfectly tailored to him, and built around data captured in during numerous wind tunnel sessions using the Ridley Dean FAST TT bike he rides on the road. Interestingly it's claimed the most significant find was that he was faster without a visor, but overall Campenaerts' performance was optimised by a claimed 5% at the end of the rigorous tunnel testing. He said:  “In order to be able to find your best position you need to test and measure. After those initial tests we raised my handlebar with 7cm, which is huge. To further optimise I needed to lower my shoulders, pull them to my ears and push my chin to my palms. This position change resulted in a performance increase of 5%!”

Surprisingly, a regular testing day won't often involve much riding, just a lot of cold air. Campenaerts explains: “It may be surprising, but for most of the tests you don’t have to ride your bike, nor pedal. In fact, it’s the most difficult part of these tests. The wind is blowing at 50 km/h at your face, but you can’t move in order to have valid results. Not being able to move makes it really cold as well. After about 15 test runs of about 4.5 minutes you’re pretty exhausted. A wind tunnel test day doesn’t last that long, but you don’t have any energy left for a road training. Believe me!” We haven't seen Campenaerts' power numbers from the day yet, but are hoping they will be shared in due course so we can do a bit of number crunching with comparisons to Sir Bradley Wiggins' previous record set in London (and at sea level) back in 2015.