It rained. A lot. And it was windy. Very windy. But the inaugural Bristol Belter powered by Specialized Concept Store (to give it its full name) sportive was a big success with over 200 riders taking on some of the biggest climbs in the West and coming back smiling.

When you wake up at 6am and hear the rain hammering on the window – beating hard against the glass – you know that a 90-odd mile bike ride is going to be tough. And when you turn on the radio and the weatherman tells you, “This really isn’t a day for outdoor activities,” well, you’ve got two options:

A. Roll over and go back to sleep.
B. Man up and crack right on.

We won’t lie: option A was massively tempting. They were postponing the Ryder Cup golf just over the bridge in Newport, after all. But it has to be option B, really, doesn’t it?

We half expected only a handful of people to show up. People who hadn’t seen the forecast, mainly. Nuh-uh! Race HQ, the Redwood Country Club in Bristol, was bustling when we arrived and people were already heading out onto the roads despite the almost comedy weather conditions. You know when the wind blows the rain so hard into your face that it stings? It was that.

But once you get on your bike and get out there, it’s never as bad as you think, is it? Okay, sometimes it is, but this time it wasn’t. You get the legs spinning and the heart pumping and you’re soon enjoying yourself. Our little group – Lee, Andy and I – soon got into a good rhythm and started ticking off the miles. 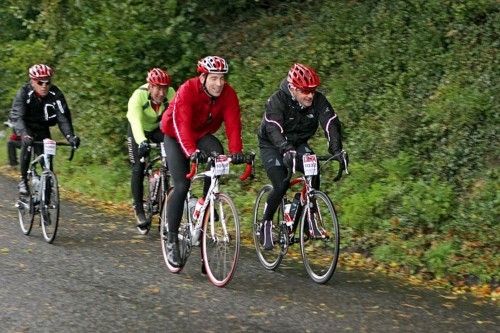 We were doing the Classic distance – 151km (94 miles) as opposed to the 110km (69 miles Standard distance – and the highlights are the big climbs. The early stages of the Belter aren’t flat but things start hotting up when you hit Brockley Combe about 30 miles in. It’s not a steep climb apart from a little kick at the end, but you’re heading upwards, on and off, for nearly four miles. It’s a grinder and when the rain’s still coming down hard and you have to keep your waterproof on, that’s long enough to get pretty darn sweaty. We got plenty of time to cool down again as we wound through the wet – occasionally flooded – lanes over the next 10 miles before the fun really began at Burrington Combe. Again, it’s not the steepest climb ever but it goes on. Plus, you think you’re nearly at the top a few times when you aren’t, so you have to dig deep for a bit more energy.

It’s exposed at the top of Burrington so things can be bleak up there when the weather’s against you. They certainly were on Sunday. We got another soaking and riding in a group meant a lot of spray from other people’s wheels too. By this point we’d all accepted that we were going to be wet all day long, although we did have a choice: rain or sweat. Either way, best just put up with it and carry on regardless. It’s a mind thing. 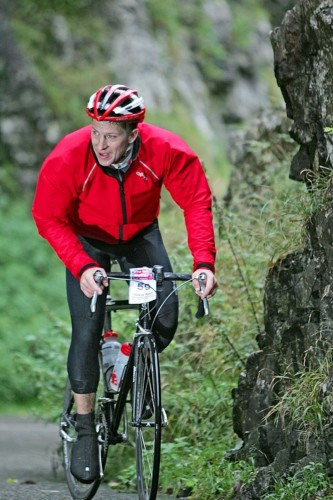 The best bit of the ride comes after 50 miles in the shape of Cheddar Gorge. If you like a challenge it’s brilliant. Cheddar Gorge is like a little bit of Snowdonia thrown into southern England. It’s totally out of place. The cliff-faces are huge – well over 100m high in parts – and they’re craggy. The real climb is about 2.5 miles long but you don’t get any properly flat bits for 5 miles, and you climb over 250m. Okay, it’s not The Alps, but it’s tough, especially if you overcook it on the steep section at the bottom.

We got to the top relatively intact and enjoyed the steep helter-skelter descent down to Wookey Hole. The trouble is, you’ve got to make up all that height again almost immediately afterwards and that’s hard with 60 miles already in your legs. Things were starting to get more difficult now. 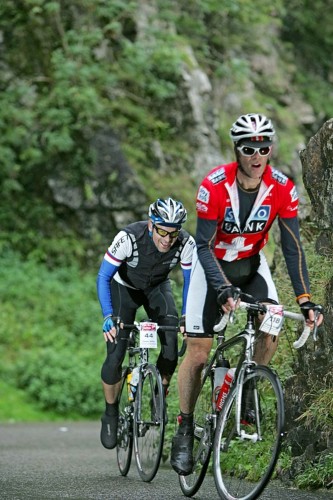 Thankfully, that was the last big climb of the day done and dusted. We still had over 25 miles left to ride, and the small climbs were starting to feel big. Still, the scenery is good through Chew Valley and back up towards Bristol – it’s better when you’re not seeing it through perma-drizzle and rain-splattered eyewear – and that helps take your mind off your aching quads. We even saw a bit of blue sky for a while… although that might have just been a hallucination brought on by a dodgy energy gel.

We could see Bristol just down below us at one point before the route markers cruelly snatched it away, taking us off to tackle Belmont Hill – which is a bit nasty just two miles from the finish. The 100m climb is a real sting in the Belter’s tail.

Back at Race HQ and everyone’s happy with a job well done. The route was demanding but well worth it – challenging and fun at the same time with some great climbs and some fast descents. The weather… well, it was atrocious, to be honest, but that just makes the coffee and cakes at the end taste even better. We’ll definitely be riding it again next year.