Road World Champs 2010 Preview: Who will reign in Victoria?

With less than a week to go before the 2010 UCI Road World Championships get under way, the elite of world cycling are now heading to the state of Victoria in Australia ahead of what promises to be one of the more intriguing recent editions of the event, first held in 1927.

There's plenty of interest for British fans too, with a very strong presence in the women's events, Mark Cavendish targeting the men's road race and David Millar seeking redemption in the men's time trial, plus Alex Dowsett looking to add the World Under-23 Time Trial Championship to his European title.

This year marks the 77th edition of the championships, and while the event has been held outside Europe on six occasions previously - in Canada (Montreal, 1974 and Hamilton, 2003), Venezuela (San Cristóbal, 1977), the USA (Colorado Springs, 1986), Japan (Utsunomiya, 1990) and Colombia (Duitama, 1995) - this year marks the first time they have been held in the Southern Hemisphere.

That means that in terms of season, the event is being held in spring, although current forecasts are that temperatures will seem positively autumnal by Southern European standards, with forecast highs next Tuesday and Wednesday of 13 and 15 Celsius, respectively, and the possibility of showers, although conditions may improve later in the week.

Last year's men's elite winner, Cadel Evans (below), finds himself in the unusual position of having won the rainbow jersey on home roads - he and wife Chiara live in Switzerland close to last year's venue, Mendrisio - and getting to defend his title on home territory too, with the couple's Australian home being close to this year's course. 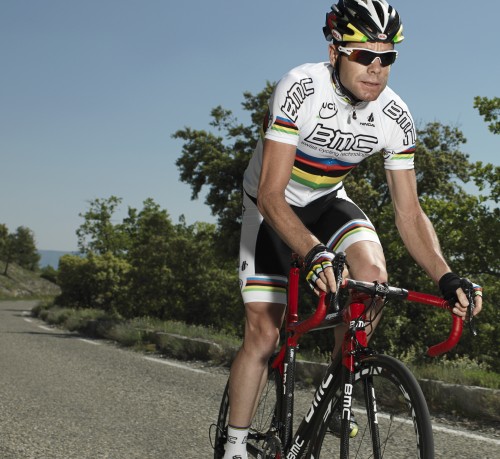 Cadel Evans has done the rainbow jersey proud in 2010

Fans, pundits, coaches and riders alike have been divided over whether or not the men's elite road race course suits spirinters ever since it was first announced, with attention centering on two climbs within the closing circuit in Geelong.

The men's elite riders negotiate that  circuit 11 times prior to the finish in the 263km race which begins in Melbourne, unlike the other events which all comprise laps of the Geelong course.

Some maintain that Mark Cavendish proved in his 2009 Milan-Sanremo win that he can not only last the distance, but is also able to cope with short, punchy climbs, with the Cipressa and the Poggio both figuring in the final kilometres of La Classicissima.

The more widely held view is that the cumulative effect on the legs of negotiating the two climbs on the Geelong circuit 11 times will not only prove too draining for the out-and-out sprinters, but will also favour solo or group attacks.

Certainly, the bookies seem to agree with the latter opinion, with Belgium's Philippe Gilbert, who proved his form during the Vuelta when he won two stages, the second of those with a solo attack in Toledo last week (below), installed as favourite with ridiculously low odds of as little as 2/1. 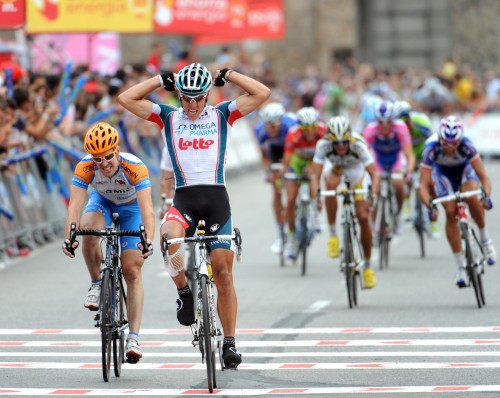 Italian national coach Paolo Bettini, who took over from his close friend Franco Ballerini earlier this year after the latter's untimely death in a rallying accident, recced the course during the summer and together with the two co-leaders of his men's elite squad has spoken of his impressions following the first training session since the team arrived in Australia earlier this week.

“We all had a great desire to pedal on the course," said Bettini, himself World Champion in 2006 and 2007. "Today confirmed the impression we got during the visit in July; the circuit is demanding, characterised by the presence of the wind."

Vuelta winner Vincenzo Nibali confirmed Bettini's impression. "It's not a simple circuit," the Liquigas-Doimo rider stated. "The two uphill kicks could make the difference, without a doubt it's tough and demanding."

Co-leader Filippo Pozzato of Katusha, who visited the course in July along with Bettini, and who is exactly the kind of punchy, combative rider the course may suit, said: "This first training session is a reconfirmation of the feelings we had in July; this is an unforgiving course. It will be necessary to experience it lap after lap during the race to be able to tackle it in the best way possible."

If it does come down to a sprint finish, then assuming he is in the bunch contesting the finish, Mark Cavendish is the favourite to become the only British man besides the late Tom Simpson to win the World Championship road race, but he does face some stiff competition, not least Tyler Farrar, who showed during the Vuelta that on his day, he can beat the HTC-Columbia rider.

Besides that, the fact that Great Britain has only qualified three riders for the race means that with only Jeremy Hunt (below), who has a home nearby and therefore has local knowledge, and David Millar for support, not only is Cavendish likely to have to rely on his skills of jumping from wheel to wheel should it come down to a sprint, but he will also have to rely on other countries' riders to help chase down any breaks that do occur. That could prove problematic should a break get away including leading riders from the stronger nations. Meanwhile, Spain's Oscar Freire has won the rainbow jersey three times before, and has his sights set on an unprecedented fourth title. The last of his victories may have been back in 2004, but the Rabobank rider did hold off Tom Boonen and Alessandro Petacchi to take this year's Milan-Sanremo, proving that he can go the distance and still find the legs at the end to contest the sprint.

Others who will have their own ambitions for the rainbow jersey include Norway's Thor Hushovd, the Russian Alexandre Kolobnev, twice runner-up in the last three years, Kazakhstan's Alexandre Vinokourov and Switzerland's Fabian Cancellara, although his focus will be on defending the time trial title and no-one has ever done the road race and time trial World Champinship double in the same year, although Spain's Abraham Olano did win each in separate editions.

As for the defending champion Cadel Evans - who of course will have completed his reign and will therfore be riding in Australian national colours, rather than the rainbow jersey - few cyclists know these roads as well as he does, and throughout 2010 he has proven a worthy champion, even when faced with adversity as happened when he broke his elbow during the Tour de France and lost the overall lead.

Should the Australian, who is supported by a strong team, find the same form he had when winning La Fleche Wallonne back in April, he could become only the sixth man to retain the title.

Among younger riders, meanwhile, the two to watch may well be Team Sky's Edvald Boasson Hagen, second earlier this month in the GP de Quebec to France's Thomas Voeckler, and Liquigas-Doimo's Peter Sagan.

A couple of weeks ago, it would have been difficult to see beyond Fabian Cancellara succesfully defending the title he won in such imperious manner in his native Switzerland 12 months ago, but a third-place finish in the Vuelta's Stage 17 individual time trial last week, and the cyclist's own admission that he isn't quite in the same shape he was ahead of Mendrisio, introduce an element of doubt.

The first time the time trial was added, in Agrigento, Sicily in 1994, it was Britain's Chris Boardman who came away with the rainbow jersey. David Millar, the country's sole representative this year, emulated Boardman's achievement in Hamilton in 2003, but was subsequently stripped of his title after admitting to doping, the title instead going to the Australian, Michael Rogers.

As recently as last year, Millar showed that he still had what it takes to win a time trial in a grand tour, taking the penultimate stage of the Vuelta in Toledo. Whether, 12 months on, he can still pull out a performance on the world stage to take the rainbow jersey and finally put the ghosts of 2003 to rest, is open to question.

While it's more than four decades since Britain had its only men's road race World Champion, you only have to go back two years to find the last woman to don the rainbow jersey, Nicole Cooke, who became the third British winner of the title after Beryl Burton in 1960 and 1967 and Mandy Jones in 1982.

Cooke, however, has endured a difficult couple of years since clinching the World and Olympic titles in 2008, and the pick of a storng British contingent in the women's events is Emma Pooley, whose Cervelo TestTeam forms the nucleus of a strong squad, with Lizzie Armistead and Sharon Laws also both selected in the preliminary squads for both events (the two starters in the time trial are still to be confirmed.)

Kristin Armstrong of the USA, behind whom Pooley won silver in Beijing, isn't around to defend her title in the time trial, but fellow American Amber Neben, the 2008 champion, is competing.

However, the 27-year-old Pooley comes to Australia on the back of a fantastic season that has seen her win the Tour de l'Aude and the Giro del Trentino, plus one-day races La Fleche Wallonne and the GP de Plouay, as well as the national road and time trial titles, and does seem the pick of British medal hopes.

Germany, Italy and Holland, as well as the host nation, all have strong squads entered in both events, however, while the French team includes the evergreen Jeannie Longo, 52 years old next month, five times World Road Race Champion.

Britain's Alex Dowsett, European Under 23 Time Trial champion, is the country's only representative in the event in Melbourne, but his Trek-Livestrong team mate, the BMC Racing-bound Taylor Phinney, will provide stiff opposition. Both also contest the road tace, where Dowsett is joined in the British team by Jonny McEvoy of Motorpoint-Marshalls Pasta, plus Olympic Academy riders Luke Rowe and Andy Fenn.

Programme (all timings are local, BST is -9 hours) 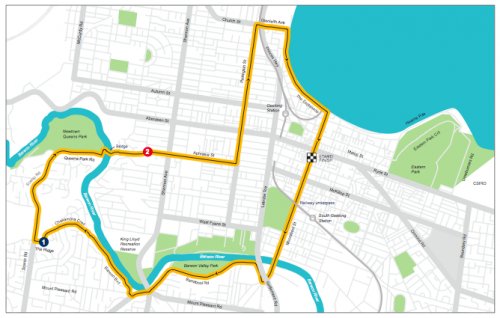 * Geelong circuit varies slightly for events other than Men's Elite Road Race. A detailed map showing schedules and deviations can be found here.

Live coverage: All events will be shown on British Eurosport and by the BBC on its website and on TV via the red button. Check listings on the Eurosport or BBC websites for details.