Being as there’s so much to see and do at Eurobike, the world's biggest cycle exhibition, it’s equally difficult to pinpoint areas of specific fascination but for me it was fully equipped big European tourers with buxom tyres (and in many cases dropped bars). Seeing as my son has just learned to ride, children’s cycling apparel came a close second alongside lighting and all things pattern/ emanating from Taiwan. I’ve never been someone who fell comfortably into a convenient box or pigeonhole so fixers, road bikes, crossers, recumbents, mtb and tandems similarly appealed. 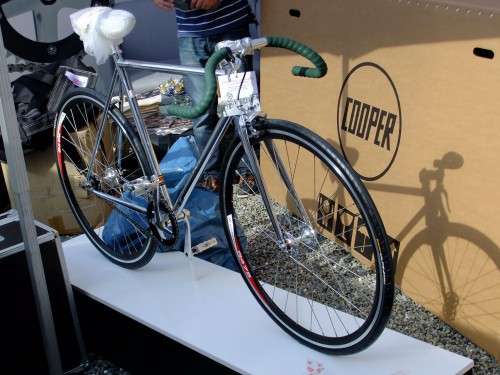 Wandering the halls leads me undecided as to the future of fixed as a genre. Literally everyone had said beast in the range and while there were some very exciting concepts including Sturmey Archer three speed fixed hubs and Cooper’s range of competitively priced Cro-moly fixer packages, to me there’s a real sense of stagnation setting in. Many seem content to produce track wannabes without provision for winter compatible rubber let alone anything so practical as full length mudguards…Yes, more mid range road path bikes/framesets please. 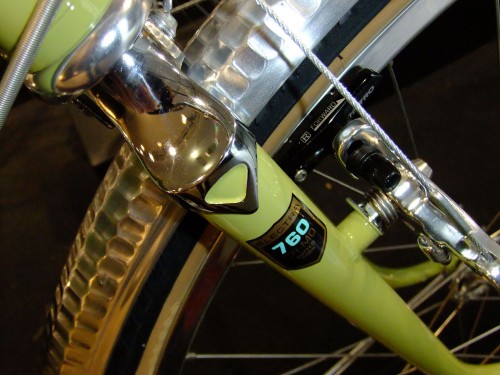 Chrome is back in that oh so Seventies style- fork crowns, blades, chainstays-frames dripping in the stuff. This too was met with disapproval on my part and much (playful) mirth from the others at team road.cc who simply filed it alongside my seemingly puritanical teetotal, vegetarianism (vegetarian and teetotal, yes - but puritanical? - ed). There’s no denying the shiny plating looks very enticing but the routine of acid baths and scraping metal from already thin walled tubing is no way to treat a work of engineering excellence (shudders with stern, reproving gaze). I’m the man in grey; I’m just the man at C&A… 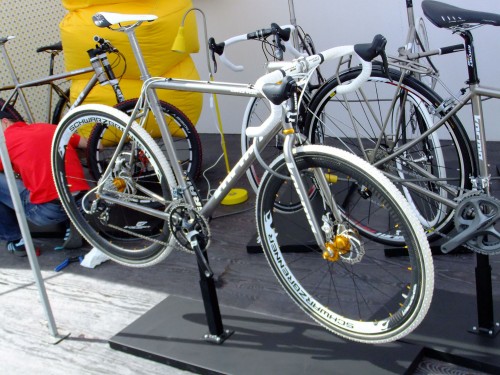 Titanium in various grades and indeed incarnations from ultra swift, yet fully dressed flat bar commuters to featherweight road and mud pluggers cropped up sporadically. Despite the material's notoriety for being difficult to machine and work with generally, most seem expertly finished in the Far East. Personally and perhaps I’m just plain contrary but I look across the China Sea and towards Russia for the finest examples. Similarly, enormous corrosion resistance means it can (and largely should) remain bare but the incidences of theft lead me agreeing to differ with the others and lean towards paint, possibly dove grey to disguise the wonder materials’ true identity and value.

Staying with finishes for a moment; Fort sported a very interesting matt grey/powder blue livery on some of the ultra practical, fast urban range. Running a finger against the fork blade revealed a rough texture that could be in homage to the Zolotate 2000 finish applied to the Marin range some 20 years past along with those retina burning neons…which also look to be making a comeback judging by GT, Charge and others. Observation suggests this is finding its way from the BMX/fixed sub genre. 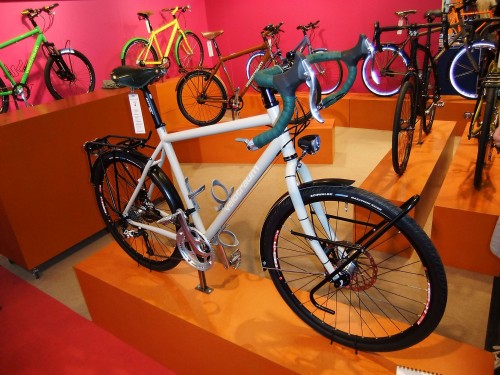 Velotraum, Focus and Katz wowed me for very different reasons. Hub gears excite me as a practical alternative to derailleurs and powder coating an infinitely preferable finish to most enamel and wet-spray paints too. Velotraum had an expedition tourer complete with Tubus racks, dynamos, drops, discs and pretty much every braze-on you could conceivably want for just shy of £3,000. Curiously the oversized Cro-moly could’ve readily passed for aluminium and this is partly aesthetic, in response to consumer taste yet equally helpful in terms of lateral stiffness when lugging the proverbial kitchen sink…Ooh I can almost hear gallons of Waxoyl sloshing around those tubes. Big aluminium chassis complete with integrated racks were another inspirational concept to yours truly. 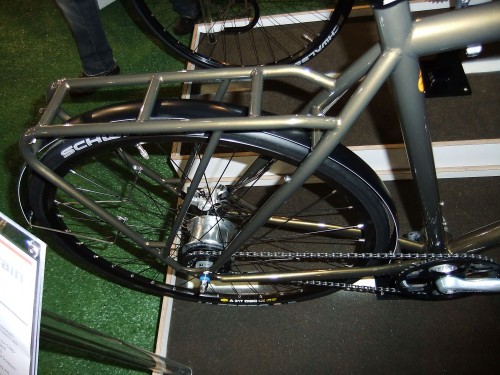 Aluminium isn’t the most obvious choice for touring but I’ve warmed to the idea that built properly in the first instance it shouldn’t fail and with racks that solid they look remarkably adept beasts of burden. 'Ah, but steel can be repaired by the roadside, pretty much anywhere in the world,' I hear you cry. Folly comes my reply. The third world artisan is something of a romantic urban myth banded around in cycling circles and doesn’t really exist. Sure, a blacksmith cum welder could certainly blast a heavy gauge steel carrier or trailer together with heat but frames; particularly those built using TIG are a very different matter.

The traditionalist voice within suggests discs aren’t repairable either, but then again in practice, the mountain bike world suggest these can be crudely bodged back into shape by the roadside too. Manufacturers have been improving the cable runs with drops by triailing clever junction boxes. Feedback suggests these are fully compatible with Magura but inconclusive with others, including Shimano. 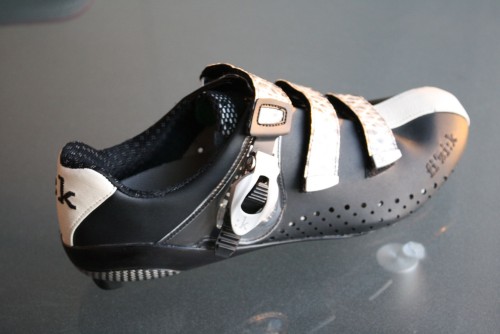 Rude boys outta jail, rude boys outta jail…Seemingly determined to pepper this report with Specials lyrics at every opportunity I’ll now turn my gaze to fashion and clothing. Initial scepticism regarding Fizi:k's new footwear range mellowed having seen their foot moulding insole technology in the flesh and these shoes but not so much as having placed my size nine’s in them, I’ll reserve judgement and attribute such to my SKA/ two tone musical leanings. 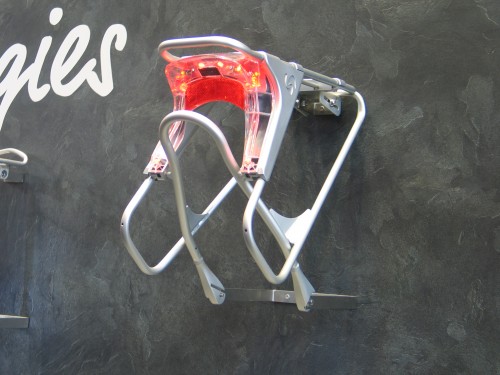 Last but by no means there’s lighting. Particularly exciting has been the trend for commuter friendly USB charging. The Taiwanese stands were awash with lights of every conceivable description, drawing me like a moth to the proverbial flame while high power systems are getting the sit at your desk charge options too. Nite Rider’s Mi Newt has been greatly revamped boasting internal li-on batteries, a choice of either 150/250lumen outputs coupled with a redesigned universal tool free handlebar bracket.

Plugging into the computer’s port for a five-hour fuel up repays between two and a half and seven hours run times dependant upon setting, although prices have yet to be finalised in the UK. At the other end of the spectrum their lightening bug and stinger blinkeys grabbed my attention with cutesy neoprene covers with stretch fit universal mounting, a choice of six colours and three intensities from the three bulb “see with” to the single “contingency” model. Powered by two easily accessible CR2032 batteries, they’re reckoned to deliver between forty and one hundred hours while weather resistant as distinct from “drop in a bucket” waterproof. 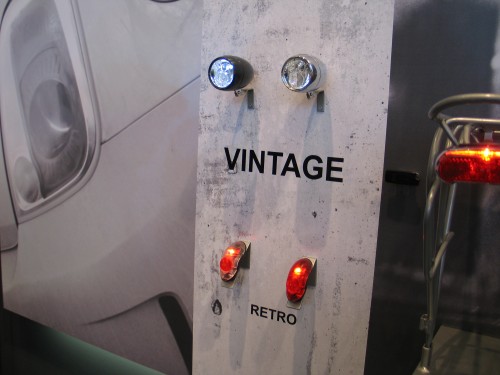 For many, dynamos are the intelligent lighting solution and this season they’ve become that little bit smarter. Both AXA and Trelok were keen to promote their forty-lumen flagship models that not only engage with dusk’s cloak but also regulate the beam according to rider speed. Below 15kmh they produce a very localised pool of illumination. Increase the tempo and the beam responds accordingly. Approximately £100 buys forty lumens while AXA’s top line nano incorporated a handy USB plug for charging IPods, GPS and other must haves on the move… Right well, you’ll excuse me, the nights are drawing in so it’s time to pour the amber nectar (that’s Waxoyl for those who hadn’t guessed) into the seat-tubes before winter’s icy grip takes hold.

More Eurobike nuggets from Shaun coming up and you can also find more of his pictures in our Touring Bike, Weird & Wonderful, People, Fixed 3, Component,  Accessories, and Clothes & Shoes gallieries.