Racing fixed in a city of hills? Bring it on!
by dave atkinson

This is it: the final test. Shakespeare Avenue rises steeply from the Bear Flat, too steeply for the gear I'm running. It's not long but the race has been, an hour in and the legs are beginning to really hurt: I'm digging deep but the entrance to Alexandra Park seems impossibly distant, even though in reality it's a couple of hundred yards. It's just Jez and me: If I can make it to the top then It's three laps of the park and a sprint, and I reckon I can find the legs for that. If I can make it to the top.

This is my first alleycat. I've ridden plenty of fixed and singlespeed machines in my time but I've never raced one on anything other than a track, nor really seen much of the messenger scene. Bath Parklife looks like a good introduction for me: local streets, a good distance and not much by way of hills (save for the last climb) mean it's a good fit for a big lad. Alleycats vary in their format. They're almost always checkpoint based but sometimes the next location is only revealed when you arrive at one, and other races work more like a trailquest with a time limit and a certain number of points available at each checkpoint: highest score wins. Bath Parklife is a simple visit-all-the-points-then-home affair, with the checkpoints announced in advance. With a recce under our belt, we have a plan.

The meeting point is a happy throng of bikes of all shapes and styles. For every Charge or Cinelli there's a classic Falcon or Bob Jackson, and there's track bikes and a couple of full-on TT frames too, including a wonderful Casati complete with 650 front wheel and sizeable-looking gear. I'm on a brand new Marin Dominican, which looks a bit try-hard when stacked against the sticker-clad and lovingly-sourced hordes, and the blue loveliness of Jez's Merckx. The talk is bikes, the people friendly, the competition an aside for now. 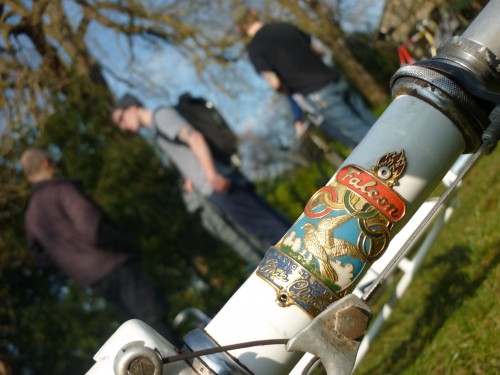 There's plenty of talk of possible routes (most of the racers are from outside Bath) but really there's only one way to do it: East first to Alice Park, then back via Hedgemead to Royal Victoria Park and the bandstand. After that it's a long, flat, main road schlep to the edge of Keynsham before an about-turn back to Bath and the final grind to Alexandra Park and the 'antidrome', a 500m circular lap crammed with speed humps and chicanes. It's 17 or so miles in total. The devil's in the details though, and there's plenty of ways to fill in the gaps.

Spoke cards are inserted, milling makes way for preparing and posturing and bikes are laid out on the grass for a Le Mans style start, albeit with a run of about ten metres... The word is said and we're off, clipping in as we sprint through the park to the road. I hadn't made any particular plans about how to behave on the streets but the first junction sets the tone: we're coming out of the park onto a signal controlled junction but there's no signal for us - what's a guy to do? After all, it is a race. There's the odd disgruntled beep but really we're mostly weaving through slow traffic on the way to the first check. The London Road is a real hoot, riders swapping places as they get boxed in and others find the gap, a fluid peloton. 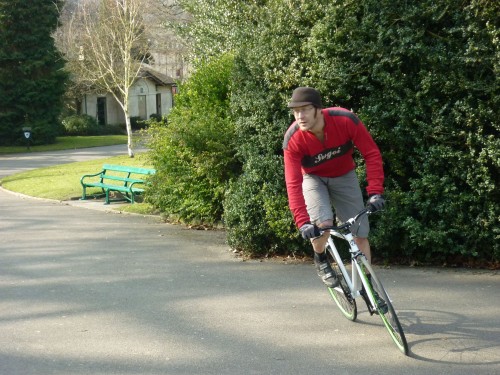 The riders split at the park, some carrying on as we hang a left at the front of the group. For a minute I'm worried that we've missed something, that there's a quicker way to the bandstand but in fact we're first to the checkpoint and Jez and I stomp back up the A4 with our first marker scrawl on our cards. The checkpoint at Hedgemead Park is a stiff climb and after a second stop we're heading off, using a bit of local knowledge to cut a couple of corners. By the time we leave the third check we've stolen a march and it's time to settle down into a rhythm.

For all the junction jumping and kerb-hopping there's more time to be made up on the next bit. The road out to Keynsham is fast and flat, and a race that started as traffic dodging turns into a time trial as Jez and I take turns to drive the pace. At the last check before the finish we're still in the lead, and complacent on the run for about a minute before riders start appearing and we realise that for all our work, our advantage is small. It's heads down again for the five miles back into the city centre and then it's time for the climbing to start, winding up through the Georgian suburbs.

We've already agreed that if we can make it to the park together we'll sprint it out on the last lap. Turning into the final climb I'm on Jez's wheel but he's looks to be strong and I'm really hurting, the hour of effort has taken its toll. I wonder if the elastic will snap but the climb though horrific is mercifully short, and we're still side by side as we enter the antidrome. In the end the Dominican's 28mm tyres make hopping the speed humps a bit less suicidal and from somewhere I've found an extra burst to take the line. I can't believe I've won – I can't stress enough how unusual that is – and my lungs can't believe I've given them such a hard time. 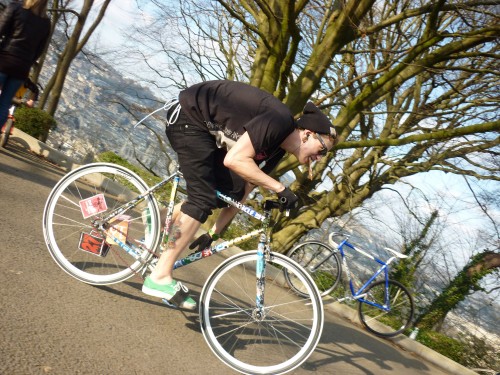 There is embracing between first and second. I've raced with Jez for many years over many disciplines but I've never beaten him before. There is beer also. There is clapping as the field comes in with tales of the road and route miscalculations small or – in many cases – race ending. There is a genuine feeling of achievement. It's much like any other bike race really, a group of the like-minded getting together to do what they enjoy and settle some scores. Just with spoke cards. And with a bit of an edge, what with the legality of alleycats being, well, debatable. "As a result of the potentially dangerous nature of the sport as well as widely varying local laws an alleycat is almost never a fully legal endeavor", says the Wiki, but with no set route they don't really qualify as road races and the fields are generally quite small. Certainly there's some creative interpretation of traffic laws at times but I could argue the same for plenty of TTs I've ridden. Underground, or just grass roots? Your call.

The next one's a hillycat and I'll be back for that. All that climbing will relegate me to my normal finishing position, no doubt – somewhere anonymous halfway down the field – and I'll get lost because it's in Bristol, but it'll be fun nonetheless. Maybe i'll fit my newly won NJS bars and get that Velocity rim built up. 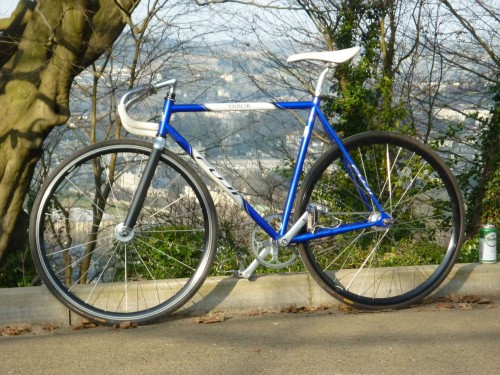 Massive thanks to John and everyone at www.trackdropouts.com for organising the ride and staffing the checkpoints - like all grass roots racing, alleycats only happen because dedicated people care enough to make them happen. Check their website for more events in the Bristol/Bath area.