Last month we visited the Continental Bicycle Tyres Division in Korbach, Germany for an insight into the brand and to see how they make tyres. Here’s what we found out.

Most often when we visit brands on their home turf it’s for the launch of a specific product or an updated range, but that wasn’t the case here. We were in Germany simply to find out more about Continental, check out the production facilities and talk to the staff about why they do things the way they do. They weren’t giving us the hard sell, they were just showing us how they work. We were actually piggybacking a trip for bike dealers organised by Conti’s UK distributor Cambrian Tyres.

I’ll give you a few facts to kick off:

• Although they make tubeless tyres (no inner tube, just a tyre on an airtight rim) for mountain biking, Continental don’t do tubeless road tyres. According to Head of Marketing/Sales Jorg Malcherek, that technology 'sucks'. His word, not mine. That said, one of the other Continental guys told us that they could be interested in doing tubeless tyres for gravel bikes where the ability to run lower air pressures without the danger of pinch flats has an attraction. Don’t hold your breath for that, though. If it does happen, it’s a way off. 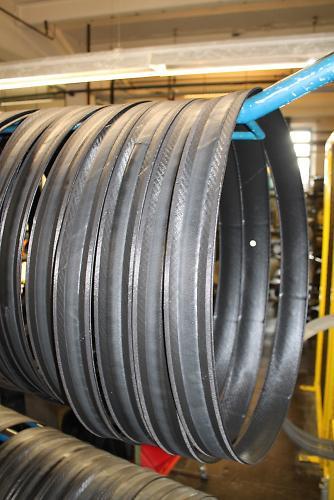 • All BlackChili is not the same. BlackChili is the name Continental gives to its high-performance tread compound used on both top-level road and mountain bike tyres. BlackChili is a mix of natural rubber and synthetic rubber with the addition of ‘nanometric carbon soot particles’. However, the BlackChili compound is actually a range of different compounds; the exact recipe varying according to the intended use. That’s probably not too much of a surprise if you think about it. Usually, there’s a trade-off between rolling resistance, grip and durability but Conti reckon that BlackChili adds improvements in all areas (naturally!).

• Conti’s Pure Grip compound is a newer addition to the range, developed at Korbach and made in Hefei, China. Conti rank it below BlackChili in terms of performance. It’s not as fast as their BlackChili compounds but it is more durable.

• Not many brands still produce bike tyres in Europe, but although they have Asian production, Continental want to continue making tyres here in Germany. Conti is, after all, a German company. It sees itself as a premium tyre brand and has a focus on maintaining that reputation. All of the BlackChili tyres are made here.

• Aftermarket tyre sales account for 70% of Conti’s bike tyre production, the remaining 30% of tyres being specced on bikes as original equipment.

• Before a new tyre comes to market, Conti put it on a machine with a 65kg mass pressing down on it, and roll it at 50kph. A road tyre needs to be capable of 7,000km, a mountain bike tyre about half that.

Some of the Korbach plant has been here for over a century while some of it is much more modern. As well as bicycle tyres, they produce 15 million winter car tyres here every year along with motorcycle tyres and various other products. The plant employs 3,500 workers. Conti have 190,000 employees worldwide at 291 locations in 46 different countries.

It won’t surprise you to learn that large parts of this place have a light coating of black dust and other parts have a thick coating of black dust. They don’t even bother painting some areas because that would be a waste of time. Of course, there’s a distinctive smell of rubber everywhere. 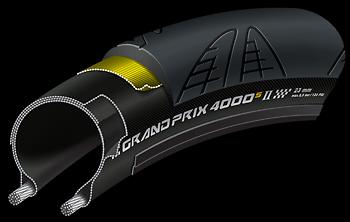 There are essentially five parts to a clincher. These are they:

• Casing – The supple body of the tyre, made of nylon (usually) in various numbers of threads per inch (TPI), that’s covered in rubber. Different tyres have different numbers of casing layers (called the ply). A higher TPI makes a finer material that results in a smoother tyre with more puncture protection. A coarser material makes a more cut resistant and robust tyre.

• Bead – The bit around the edge that secures the tyre to the wheel rim. These are made from wire or foldable Kevlar.

• Anti-chafing strip – The reinforcement that protects the bead. It’s nylon on Conti’s road tyres, a solid rubber strip on their mountain bike tyres.

• Tread – The compound that comes into contact with the ground. Conti say that the tread pattern doesn’t make much difference on the road. It has a role in certain circumstances, but it doesn’t do much, unlike off-road when the tread pattern is vital in determining grip on conformable ground.

• Protection layer – Manufacturers sometimes put an extra-thick rubber compound below the tread, often in a different colour, to provide some resistance against punctures. Conti’s Plus Breaker is essentially thick rubber but they use a tightly woven polyester PolyX Breaker in higher end tyres, and Vectran, a lightweight liquid-crystalline polymer, in the top-end models. Vectran is similar to Kevlar but it is more waterproof. Conti use a double layer in their 4-Season tyres. Stat fans will be pleased to hear that Vectran is five times as strong as steel.

One other feature that you’ll see on the sidewalls of some Conti tyres is the distinctive brown, grid-like DuraSkin layer. It’s a polyamide fabric that’s designed to protect the sidewalls in tough conditions, such as riding over the cobbles in Paris-Roubaix. 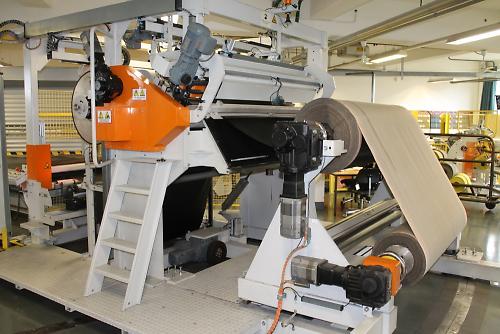 Making tyres is a more intricate process than you might imagine, with several different stages. It’s not just a case of bunging a load of rubber in a mould, you know. Conti make their own casing material: sheets of nylon threads that are covered in rubber. First, these sheets are sliced into the slices that will go on to be made into individual tyres. This machine is making the bead. The wire comes in on big spools and comes out as a fully formed bead. This thick, heavy black stuff is the raw material that goes on to become the tread. It gets forced through a die that shapes it, and it eventually comes out to the size, shape and thickness required. 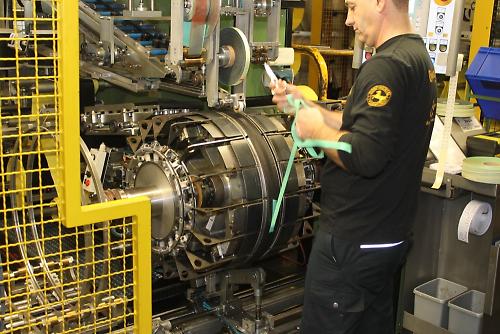 The next stage is to put a length of the casing onto a drum where it is tensioned, then the breaker and the tread are added, and the cover that stops the material sticking to itself when wound up is removed. 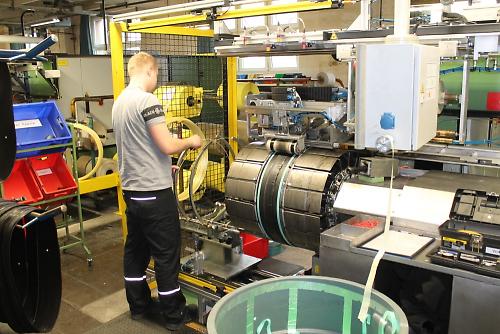 Next the bead is put on and the chafers are added automatically. 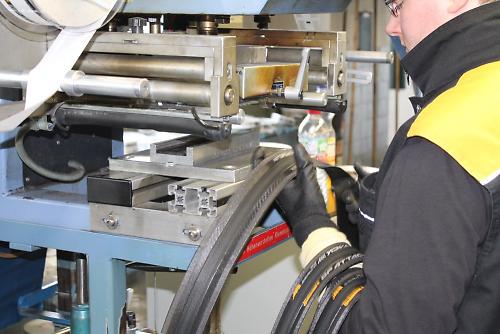 Then the labels are added and the joint where the two ends of the tyre have been joined together are pressed and smoothed. 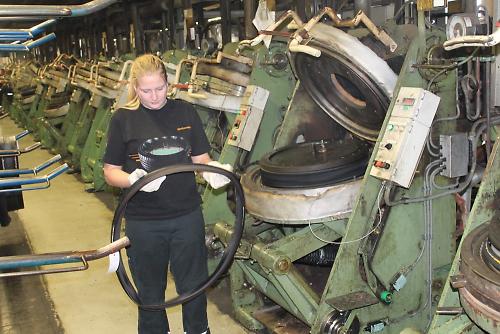 Only then does each tyre go into an individual mould where it is cured. This vulcanisation process makes it much more durable than would otherwise be the case. The tyre sits between a 160°C mould and a bladder with steam pushing it into place. It stays there for between 3mins and 4:30mins, depending on the tyre. 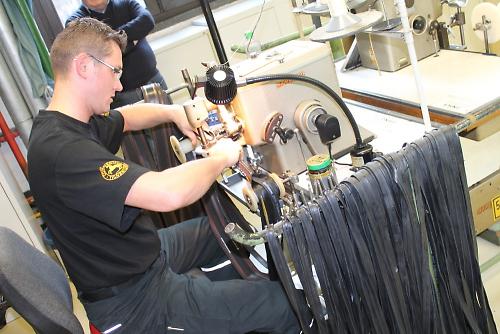 Making tubulars is a similar process to begin with although each one has to be stitched individually on a machine. A standard butyl inner tube goes inside and then a base cloth, the rim tape, is added that will eventually be stuck down onto the wheel’s rim.

For more info on Conti go to www.conti-online.com or www.conti-tyres.co.uk/conticycle.