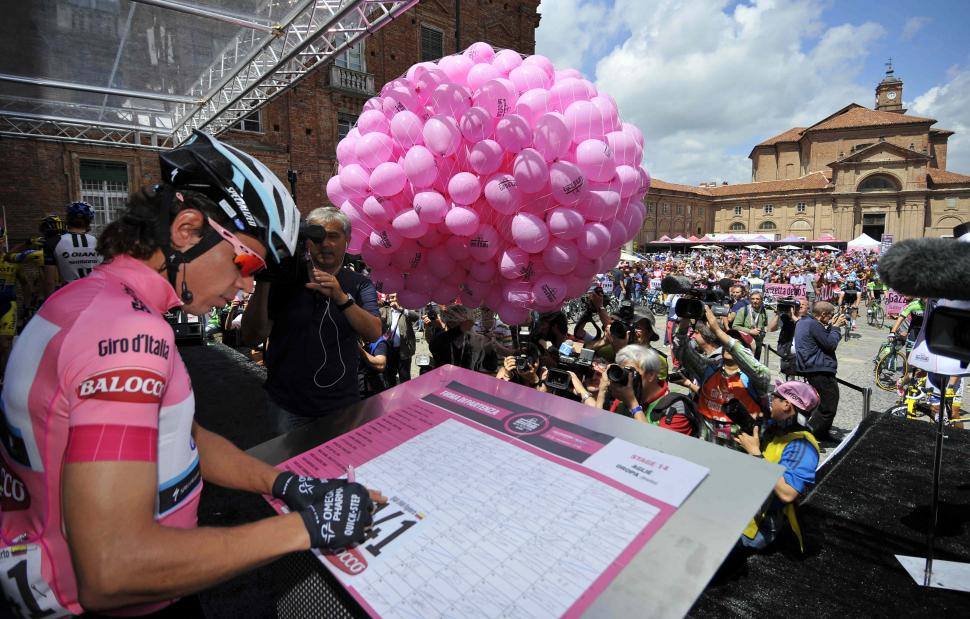 The 2014 Giro d’Italia heads into its final week with half a dozen riders within four minutes or so of the race lead – and with bonus seconds on offer, some big mountain stages still to come and no-one dominating the way Vincenzo Nibali did when he won last year, there is plenty of scope for twists and turns in the battle for the maglia rosa.

Here’s our guide to the last week of the race ahead of the finish in Trieste a week on Sunday, complete with maps and profiles. You’ll find much more, including details of individual climbs and a link to the official roadbook, on the Giro d’Italia website.

The 16km climb, with an average gradient of 8 per cent, that comes at the end of today’s stage has been named the Pantani Mountain of the 2014 Giro d’Italia as organisers RCS Sport commemorate the 10th anniversary of his death.

The ski station of Plan di Montecampione is where il Pirata won Stage 19 of the race, the final day in the mountains, thereby sealing his overall victory. The 210km that precede the category 1 climb will be a prelude to what should be some explosive riding from the GC contenders, particularly with a rest day tomorrow. 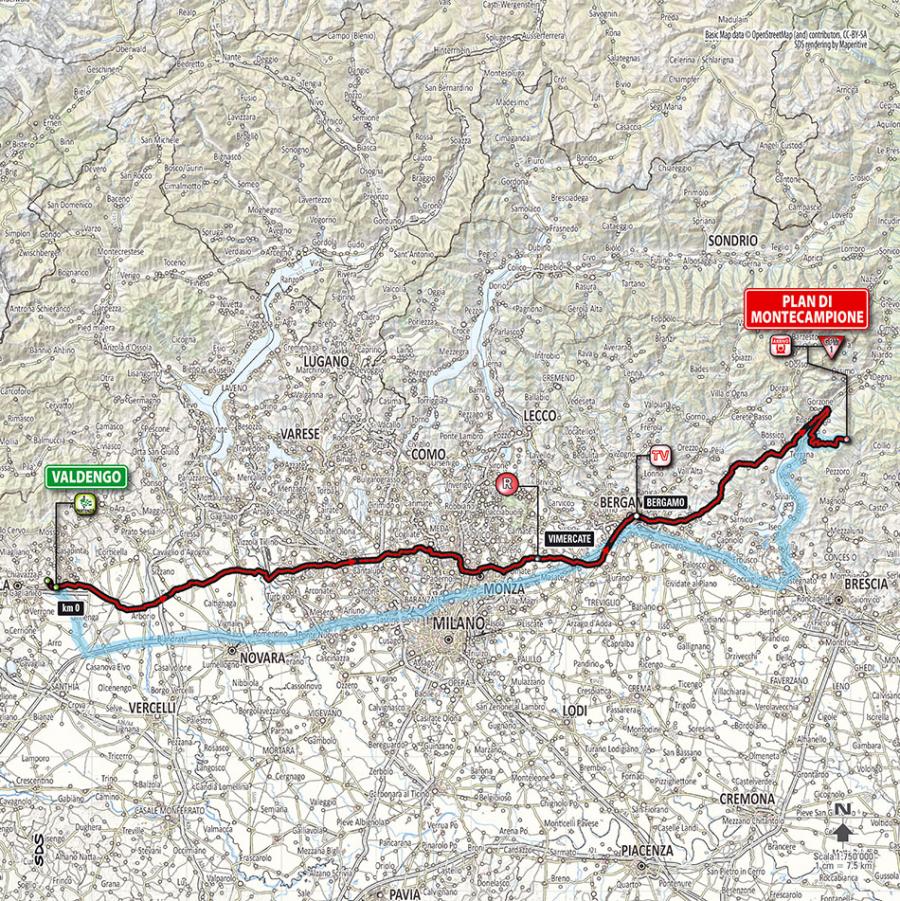 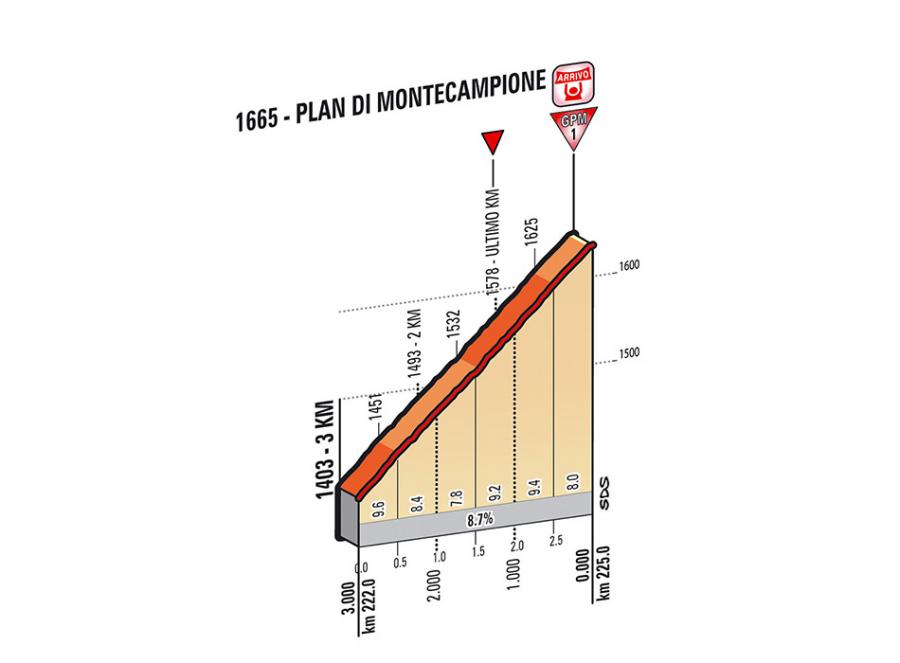 A monster of a day with three mountains of more than 2,000 metres to conquer. The first two are the fabled Passo di Gavia and Passo dello Stelvio – designated the Cima Coppi as the highest point of this year’s race – ahead of the Giro’s first ever finish at Val Martello/Martelltal.

Clearly it’s an important day for the overall, but also for the mountains competition, with the Cima Coppi worth 40 points to the first man across, compared to 32 for a category 1 climb such as the Passo di Gavia. Expect riders fighting for the blue jersey to try and get in the break, and for those chasing the pink one to fight it out on the final climb. Vittorio Veneto, named after Italy’s first king, Vittorio Emanuele I, has a special place in Italian – not to mention world – history. In November 1918, the Italian army plus allies including three British divisions inflicted a crushing defeat here on Austro-Hungarian forces, helping bring an end to the First World War.

Opening with a descent over the opening 27 kilometres or so, today’s rolling parcours has three category 4 climbs ahead of a run-in to the finish that has a slight climb followed by a shallow descent in the final 450 metres. The Muro di Ca’ del Poggio, 20km out, has ramps of 16 per cent and could be a launch pad for attacks. The sprinters will target this stage, but it’s far from certain they will prevail. 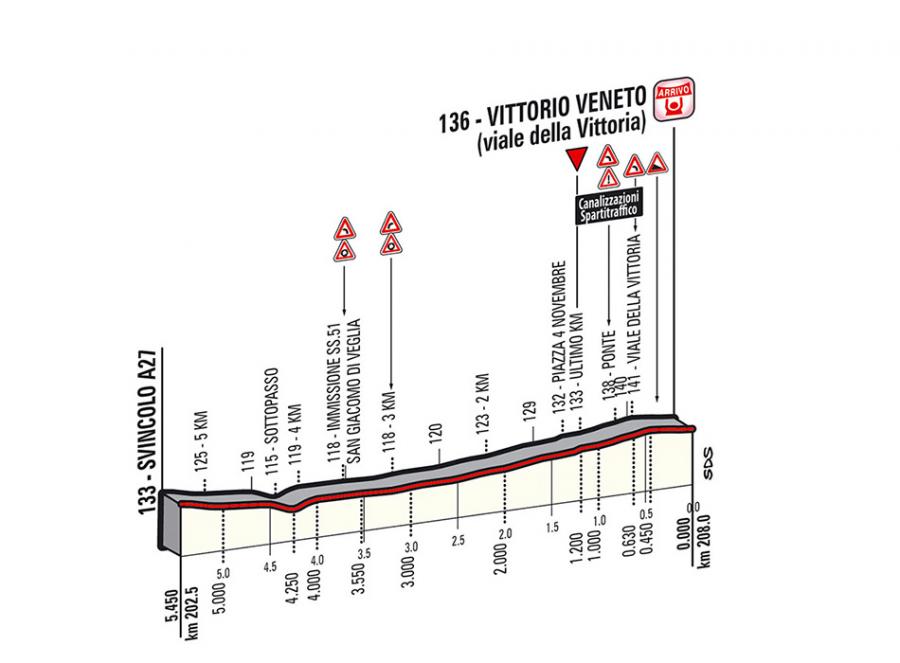 Another long day in the mountains and one on which the climbing starts early on with a big climb in the Dolomites to the Passo San Pellegrino, with a height gain of 1,500 metres in a little under 50km and ramps of 15 per cent towards the end.

The Passo del Redebus is the shortest of today’s three categorised climbs, but has an average gradient of 9.5 per cent, while the final climb is 16.8km long and averages 8.4 per cent in the final 13 of those, hitting a maximum gradient of 14 per cent in a couple of places. 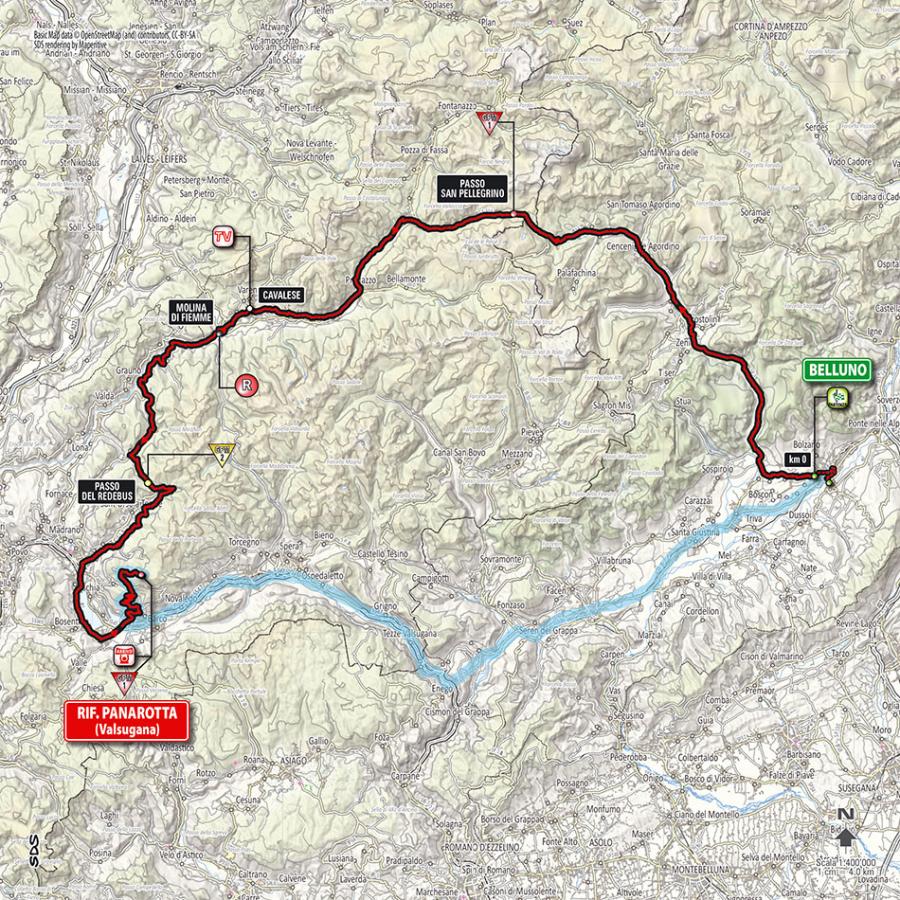 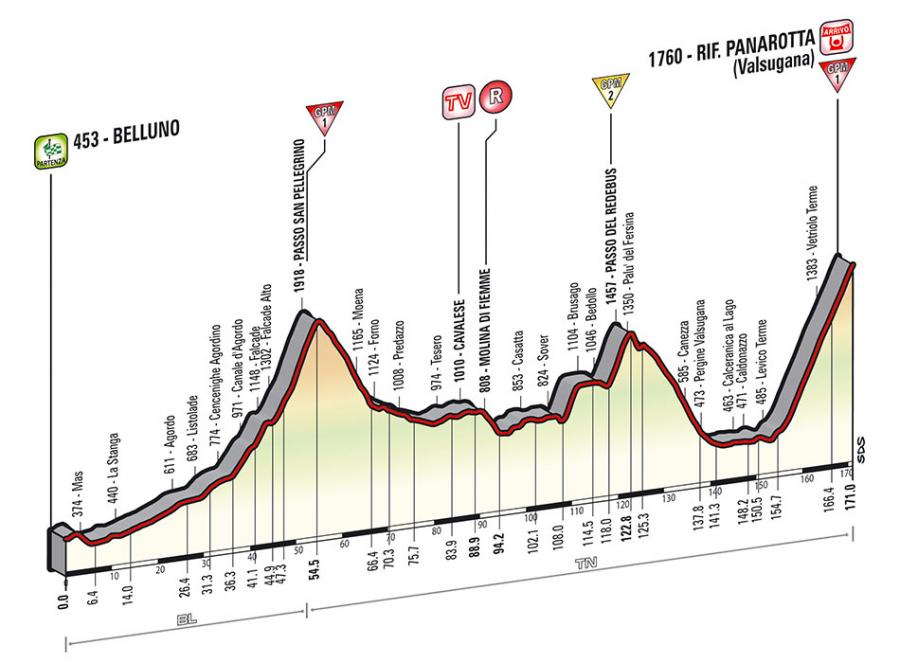 Two stages remain to decide the 2014 Giro champion, starting with this beast of a mountain time trial. The climb proper begins 7.5km in, has a height gain of 1,538 metres, an average gradient of 8 per cent and hits 14 per cent around 5km from the end. With each man on his own against the clock, there is every chance of a shake-up in the overall standings, an incentive for the stronger climbers.

Another location with strong links to the First World War, the location of the finish has a memorial to soldiers who fell in the conflict, 20,000 of whom are buried here. The only previous Giro stage finish here came in 1968, the 50th anniversary of the end of the conflict. 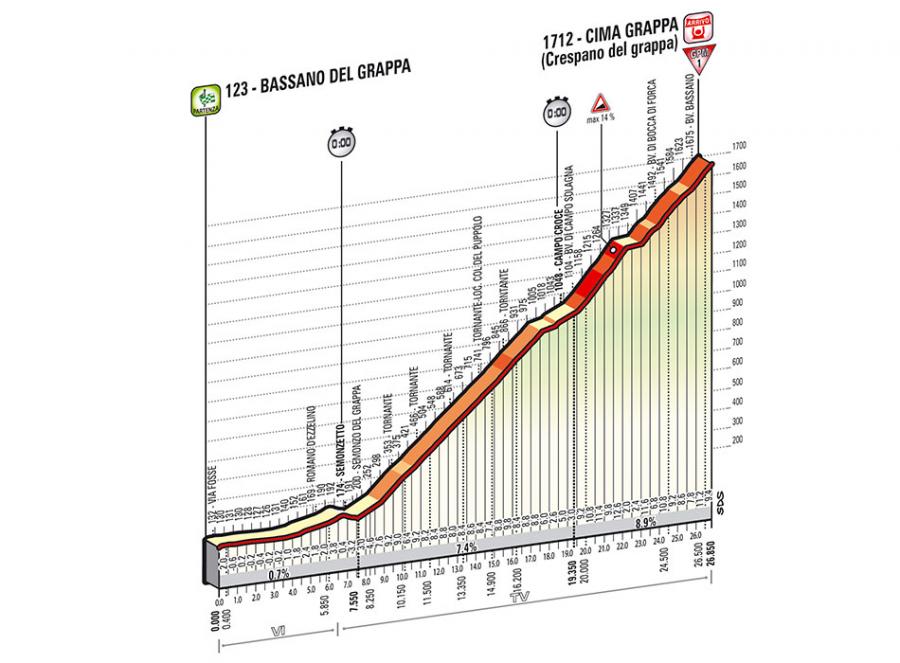 Any visit to the Zoncolan is something to look forward to, but with this being the final mountain stage of the race, the summit finish there has an extra-special feel to it. First, however, the riders have to tackle the category 1 Passo del Pura followed by the category 2 Sella Razzo.

The Zoncolan itself has featured as a summit finish in the race on four occasions, and on two of those, the stage has been taken by the overall winner – Gilberto Simoni in 2003, and Ivan Basso in 2010. It’s a monster of a climb, not for its distance – around 10km – but for a stretch between 2km and 4km with an average gradient of 15.4 per cent and which tops out at 22 per cent. There could be some big time gains – and losses. 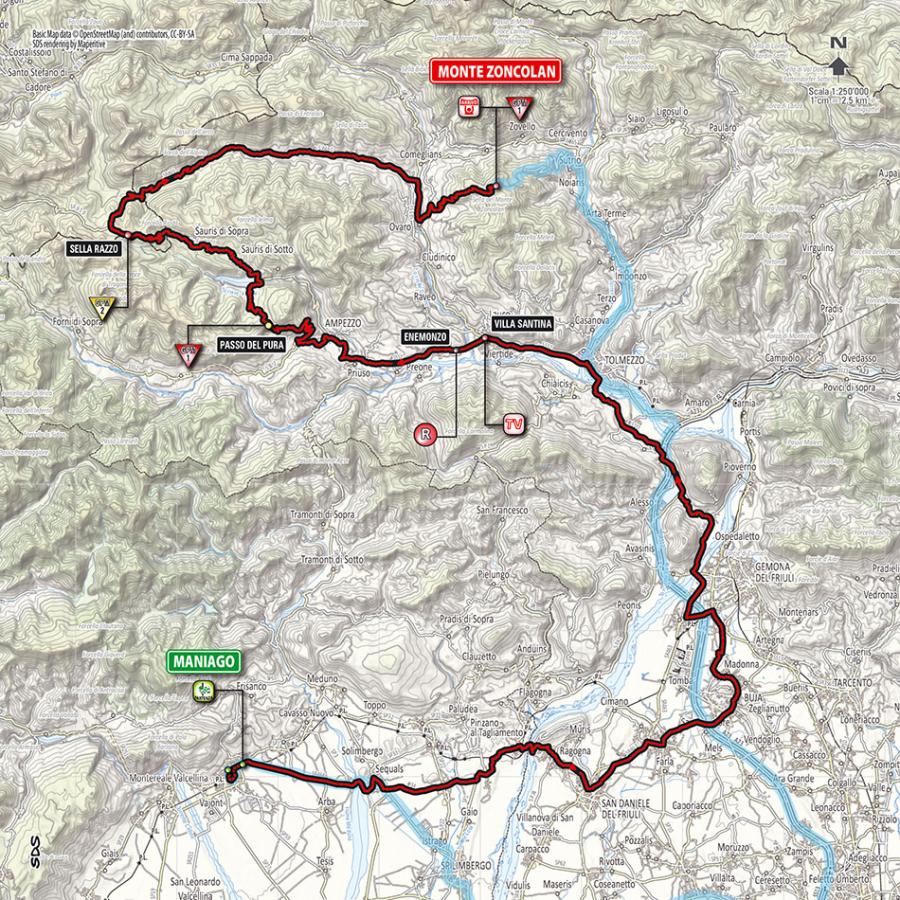 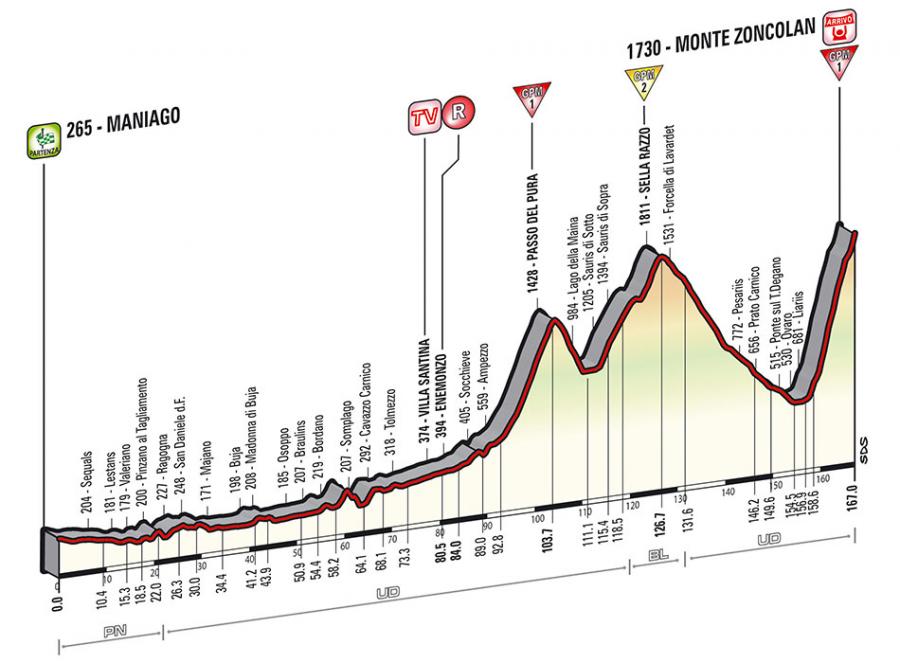 Trieste has twice hosted the final stage of the Giro, in 1966 and 1973. But the most famous of the race’s 20 visits was in 1946 when, when supporters of Marshal Tito’s Yugoslavia, which coveted the Adriatic city attacked the peloton with stones, forcing the annulment of the stage. Trieste native Giordano Cottur had other ideas, and rode into the city with a small group of other riders to a hero’s welcome.

Early on is the final categorised ascent of the Giro, the category 4 Passo di Monte Croce, and after 110km the race enters Trieste itself for 8 laps of a 7.2km circuit. There is a short climb halfway round each lap, with an average gradient of between 5 and 6 per cent, but it’s difficult to see the 97th Giro concluding with anything but a bunch sprint. 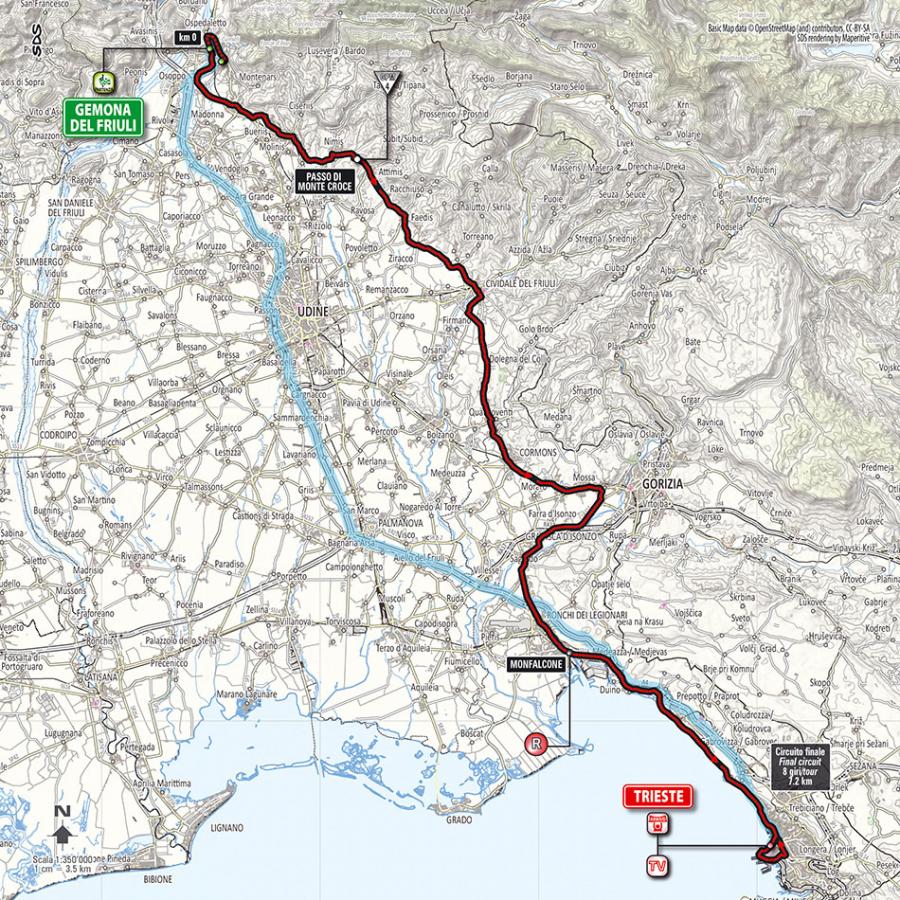 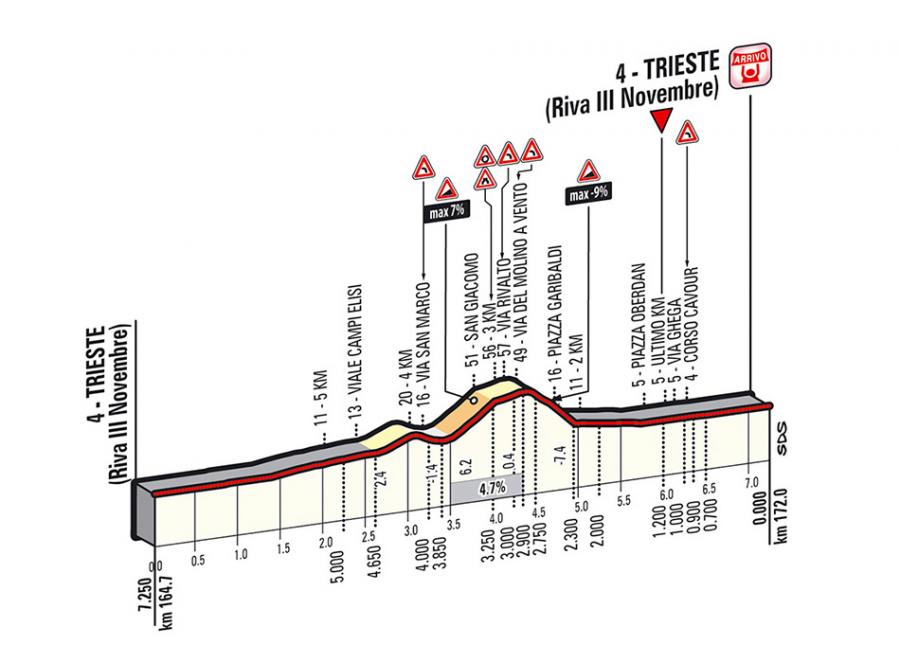