Riding the Tour of Flanders Cyclosportive

The day before Fabian Cancellara romped to victory in the 2014 edition of the Tour of Flanders, I was riding the very same roads and hauling my way up the very same hills. On the Koppenberg – “probably the most famous hill in the world”, according to the T-shirt slogan – my back wheel was spinning on polished cobblestones, while all around me other riders struggled to keep going, or failed and fell into the verge. Managing to stay upright, I reached the top and was applauded for my efforts by a crowd of flag-waving spectators.

This may be only the ‘Cyclo’, the opportunity for club cyclists and amateur racers to sample one of the hardest single-day bike races in the world, but it gives a taste of the conditions and atmosphere enjoyed by the professionals when they ride the route for real. Combine riding the cyclo with watching the pro race next day and it’s a cyclist’s perfect weekend.

The story begins two years ago when I rode the Paris-Roubaix sportive and found myself unexpectedly enjoying the experience of pounding my bike across rugged pave’. With Roubaix done, and a couple of Etapes in the bag, the inevitable question was ‘where next?’ and the answer – just as inevitably – was Flanders, the heartland of European bike racing. 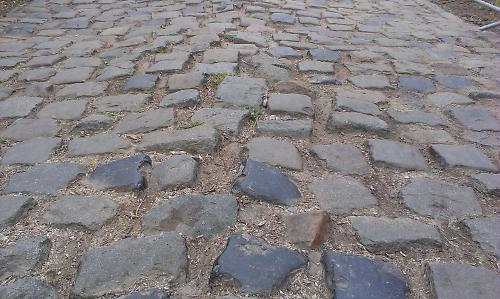 With a couple of buddies from my local cycling club we booked a tour. And so, when most sensible cyclists were taking it easy through the winter, I was putting in big miles, often in bad conditions, preparing myself for windswept Belgian roads and those notorious cobbled climbs that have tested the legs of the best bike-riders in the world for more than a century.

Fast forward to the first weekend in April, and I’m in Bruges. The Tour of Flanders cyclosportive begins in a stadium car park on the outskirts. It’s bland and uninspiring, but at least there’s enough space for the 4000 riders doing the long distance (250km) route option.

A tootle through the suburbs in the dawn light takes us to the historic Markt square, where the professionals will begin their race next day. Just like them, we go under a start arch. Unlike them, we ride a few hundred metres and then have to deal with road works and temporary traffic lights. It’s an inauspicious start. And it’s followed by one of the most tedious sections of cycling I’ve done for a long time. Despite the event’s prestige, the roads are not closed, so we ride for about 100km down a narrow cycle-path beside a busy highway, with little room for overtaking, lots of kerbs and bollards to avoid, lots of twitchy riders continually braking and accelerating, and lots of passing lorries kicking up dust.

But all is forgiven when we reach Oudenaade and join the short and medium-distance (80km and 135km) route options. There are many more participants on the road, and a lot less car traffic, and at last we have the opportunity to enjoy the ride.

So far, the route has been all flat tarmac, but now we’re in the lumpy region billed by the local tourist board as the Flemish Ardennes, and that means two things: hills and cobbles. Sometimes served separately, sometimes together.

First hill is the Wolvenberg, followed by two long flat sections of cobbled ‘straat’ to loosen the legs, as well as anything on the bike not bolted down tight, going by the number of pumps and bottles lying in the road. Then comes the Molenberg. At first it’s an unassuming little lane, with a neat hedge on one side and tranquil meadow on the other, but soon turns into a nasty climb with some very rough cobblestones and a steep gradient maxing out at 14%, plus a bulging camber thrown in for good measure.

Riding in a tight bunch, it’s an effort to maintain a half-decent speed as well as steer my front wheel around the worse of the protruding cobble edges. It only takes one rider to get it wrong and put a foot down, and everyone behind is forced to come to a halt. Luckily, no-one stops, and we all make it.

Then come two more flat cobbled sections winding through the fields. They’re reminiscent of the Paris-Roubaix pave’, and rough enough to judder the bike all over the place, but maybe not quite as bad as their French cousins. The same technique is still called for though: hands loose on the tops, sit back in the saddle, big gear, pound away, grimace, hope it ends soon.

So when the next two climbs – Leberg and Valkenberg – turn out to be tarmac, it’s a blessed relief from the pounding, although they’re still steep and nasty enough to force some out-of-the-saddle straining near the top.

On and on we go, alternating stretches of cobble and tar, with the hills coming thick and fast: Boigneberg, Eikenberg and the infamous Koppenberg, quickly followed by Steenbeekdries, Taaienberg (apparently Tom Boonen’s favourite hill for attacking) and Kaperij (where we stop, most un-Boonen-like, for a free can of Red Bull). Then comes the Kanariesberg and Kruisberg, with every hill forcing riders to change down through the gears and concentrate on finding the smoothest route to the top. Sometimes it's the crest of the camber. Or it might be the gutter. You pays your money and takes your choice. Either way, there’s always a Belgian on your wheel or skimming past with little apparent effort.

In between the hills and cobbled sections, we swoop along delightful roads through the undulating landscape. Time to look up and enjoy the scenery. We pass farms, little villages and a couple of windmills. Flanders can be notorious for its bad weather, but we are lucky. No rain, and temperatures warm enough for ¾ tights - and even shorts if you’re hardy. Or Belgian.

With 220km done, we reach the last hills, and it’s a grand finale with two of the most famous names in Flanders: Oud Kwaremont and Paterberg. My legs are beginning to lose power, and I’m finding it increasingly hard to go as fast as possible up a cobbled 20% slope, but by now it’s a sunny afternoon and the spectators are out in force, so keeping the pedals turning becomes a matter of national pride as well as survival.

The Kwaremont doesn’t disappoint, and looks just like it does in those famous pictures from past editions of the pro race. Starting with a gentle gradient, it just gets steeper and steeper, winding up between grassy banks, with the cobbles getting increasingly rough and more slippery. 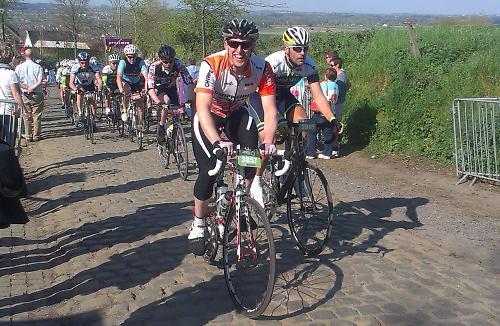 Someone in front stands up, spins a back wheel and falls off. His mate stops to help. In response to following riders' screams of ‘allez!', plus a choice selection of Flandrian insults, they get out of the way just in time, and I’m able to keep going all the way to the top.  Phew.

A quick breather and photo stop and then it’s back on the bike with just one more hill to go: the Paterberg. Infamous because it’s mostly straight and unrelentingly steep like a ski-slope. Controversial because it’s now the last climb on the revised route of the pro race. Hard because, well  because I’ve now been riding for 9 hours and I’m knackered.

Halfway up, as my leg muscles scream, my back tyre slides, and I’m stationary for a moment. I move my weight back, the tyre grips, and I’m moving again. Push push push. Nearly there. Sweat in the eyes. Mind that hole. One more push. Done it. As I crest the summit, I’m greeted with a cheer from some local fans enjoying a road-side beer and barbeque. I’ll take their adulation, well-oiled or not.

Then it’s all over. A downhill section and a steady cruise along beautiful smooth flat roads back to the finish at Oudenaarde. Some riders sprint, but I’m content to freewheel across the line, happy in the knowledge that I got round the route without my bike or body suffering serious grief. 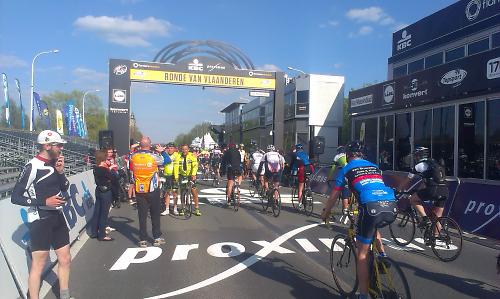 I also have an even greater respect for Cancellara, Boonen and the other professionals that I see flying across the cobbles the following day. It puts my wobbly ascents in perspective, and confirms that my endurance levels are not what they were, but the combination of riding the route then watching the pros is undeniably a fantastic way to experience the Tour of Flanders.

Would I do it again? Yes. Would I skip the first bit down the main road? Yes, probably. Although it was good to get a taste of the full 'pro' distance, I wouldn't want to do it again. Would I do all the other bits? Absolutely. In reality, the pros did a different course, with three big laps in the latter part of the race including three ascents of Oud Kwaremont, while us sportivistes did each hill only once. But it was still a great experience, and highly recommended for all bike fans.

To ride the Tour of Flanders Cyclo, you can enter on-line, then arrange your own hotels, and make your own way to Belgium by car, ferry, plane or train. All the info for this year’s event is here: http://www.sport.be/rondevanvlaanderen/2014/eng/  There will be something similar for 2015.

Alternatively, packages are available from various companies. We joined Sports Tours International on a three-night-four-day trip that included coach to/from the UK, hotel in Ghent, sportive entry, transfers to/from the sportive on the Saturday and to watch the pro race on the Sunday. If cobbles aren’t your thing, this company organises similar tours to other European sportives and races. http://www.sportstoursinternational.co.uk/cycling