This weekend David is riding the Paris-Roubaix sportive. Here's a look ahead and lessons learnt

Last week I recalled my experience of riding the Ronde Van Vlaanderen (Tour of Flanders) a few years ago. I refreshed my memories last Saturday and rode the new route, which now finishes with a double whammy of the Oude Kwaremont and Paterberg. But more on that ride in a future blog, this week has been too busy to allow me time to write it up.

Because I'm straight into my next adventure. Just about recovered, I’m now preparing for another assault on the cobbles, I’m riding the Paris-Roubaix Challenge this Saturday, followed by race spectating on Sunday. Taming the cobbles famous on this route is a tall order because compared to the relatively smooth pavé of Flanders, the sectors used in Paris-Roubaix are much tougher.

Much much tougher in fact. Brutal. An assualt on your senses. Short of riding a road bike off-road, it's the hardest and most punishing unpaved roads you could ever point a road bike at. You woudn't think there could be much difference this race and Flanders. Cobbles are cobbles, right? Yes, but no. Those used in this race don't get the same level of maintenance because they're mostly just farm tracks. Those in Flanders are public roads so they're better looked after. Which means they're in a pretty poor state. 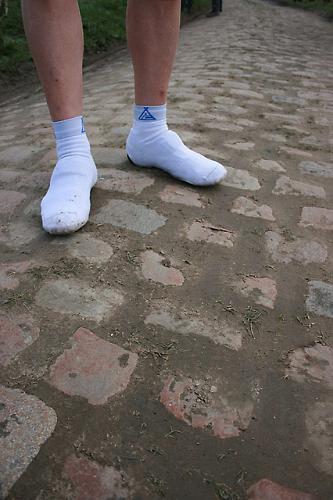 Though the route is by and large mostly flat, with none of the Flanders famous Helligens, the cobbled roads are far tougher to ride. And because they're flat, and the best way to ride them is flat out, they're a far more extreme test of your fitness. You need to be able to maintain a high level of power output for sustained periods of times to get across them.

The first time I rode Paris-Roubaix a few years ago, with several editions of Flanders in my legs, I thought I knew what to expect. After the completion of the first sector however, my expectations were completely shattered. Nothing can really prepare you for the pummeling you and your bike are subjected to. It’s more akin to mountain biking through a rock garden. You're left with the impression that it's complete madness to ride a road bike over such roads. 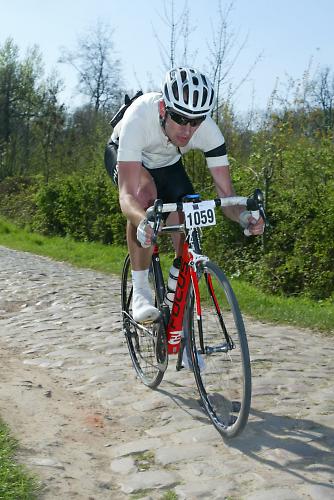 Riding the Trouée d'Arenberg sector, the most famous scene of the route, several times on the Thursday before the race, my riding buddies and I were shocked at the disrepair of the cobbles. The cobbles are all at jaunty angles, many of them sticking out above their neighbours and in many places, missing altogether. the gaps between the cobbles are bigger and irregular, and in places enough to swallow a 23mm tyre. There’s a reason the pros run 27mm tyres, to surf these chasms between the rocks.

To ride, they’re brutal. Flanders is rough, but it’s manageable. You can get into a rhythm with them. The cobbles of Paris-Roubaix leave you feeling battered. There's no smooth line, there's no flow. Arm pump and a death grip stays with you long after your wheels return to the sanctuary of the Tarmac. The abuse on your equipment is spectacular. You’re accompanied by the sound of panging spokes and metallic clanks and the unmistakable sound of the rim contacting the cobbles underneath. It's scary stuff. You really don't want to be thinking about the structural integrity of any component on your bike at this point. 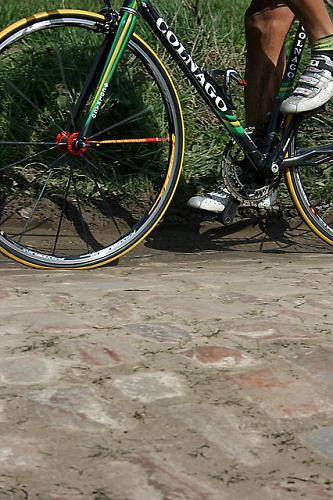 It’s such a rough route that special concessions are made to kit by the mechanics for the pro riders. 27mm tubular tyres are a common choice, unlike the widespread use of 25mm tyres at Flanders. Few stock race bikes will accept such wide tyres, so the manufacturers have to produce special frames and forks. That's why the race has become a launch pad, a testing ground for the  latest breed of endurance bikes like the Trek Domane, Specialized Roubaix and BMC GranFondo, with their frames designed to flex in a controlled manner to absorb shocks.

We’ve seen more outlandish solutions to taming the cobbles in the past. RockShox developed a road suspension fork with 30mm of travel back in 1991. The following year Gilbert Duclos-Lasalle rode that fork to victory. Another win came in 1994 with Andrei Tchmil.  Bianchi went a step further and developed a full-suspension road frame (yes, really) with a coil rear shock. It wasn’t a successful debut, Johan Museeuw’s bike broke 24km from the finish. Suspension eventually fell out of favour with riders, and they returned to tried-and-tested tyre setups and adjusting tyre pressures.

Then in 2005 Trek showed a soft tail road frame that borrowed technology from their mountain bikes, with a small elastomer housed in the seat stay wishbone. It provided about 12mm of travel. But that didn’t catch on either. In the past couple of years, we've seen a return of the manufacturers trying to design cobble-taming bikes, with the most eye-catching the Trek Domane. Most manufacturers have their own take on a bump-absorbing design, Specialized, Merida, Bianchi, BMC, they're all at it. But for the pros, tyre choice, tyre pressure, skill, local knowledge and a bit of luck seem to be the route to race success. 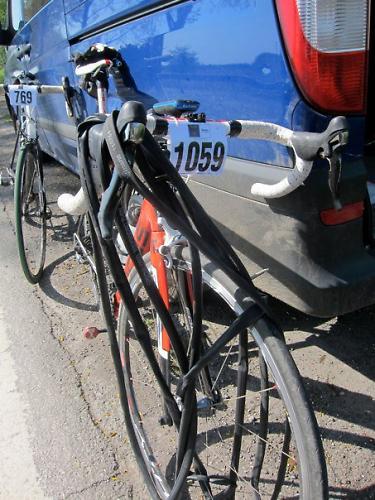 I'll be hoping for some of that luck too, in my return to the Paris-Roubaix Challenge this weekend. I suffered five punctures when I rode it last. I only had four spare tubes. Needless to say, riding the Carrefour de l'Arbre sector on the rim, because I was too stubborn to give in and walk the rest of the way, or wait for the broom wagon, wasn’t the glorious finish I had been hoping for. Fingers crossed for some better luck this time around.

ASO, the organisers, have announced the course with the full list of 27 cobbled sectors. Here they are below. The stars indicate the severity rating.

1
Council has "no intention to enforce" parking restrictions in segregated cycle lane where cars are parked bumper to bumper
2
Near Miss of the Day 521: Close pass ... by a police van (plus how it all went a bit Kafkaesque afterwards)
3
Police investigating cyclist Tony Parsons' disappearance confirm his body has been found
4
eBay seller refuses to accept bike auction offer – says "would be unhappy if I sold to Scouser"
5
Jeremy Vine films motorist driving down Hyde Park cycle path
6
Have your say on rat-running motorists driving through London’s Royal Parks
7
Bike at bedtime: Cotic Escapade
8
Police in Forest of Dean send group of seven mountain bikers back to Wales for lockdown rule breaches