My day with the Tour Series 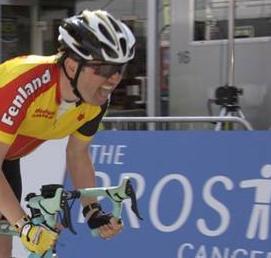 I keep repeating the phrase “what an experience” to anyone who will listen after my ride in the Travelchoice time trial in Peterborough City Centre.

The build up to the Tour Series had been all day in the city but as I pedalled away from work at 2pm for a 2.30pm sign on, nothing could have prepared me for what I would see.

The barriers were still being erected and there were some issues with the circuit and marshalling that our event helped sort out.

Whilst we were all under no illusions that we were merely the starter for the main course it felt amazing to be treated like a pro cyclist for one day. I have been riding and racing bicycles for 17 years now and this was the maddest most intense experience I had been a part of.

Before we could even get on the course to warm up there were local businesses asking us to pose for photos with their respective stands in the main square. I couldn’t believe that there were people there to watch us, it was an incredible feeling that only enhanced the experience.

The clicking of cameras (from photographers keen to get the best angles for the evening) made us feel even more special and when the tv cameraman was right up next to us at the start of the time trial it made me appreciate what the average Tour de France rider goes through… only they do it on a daily basis as opposed to once in their career.

Going round my two timed laps was just the greatest, if most painful feeling ever. The rush of hearing people cheering, seeing kids waving flags and having the commentator (Anthony McCrossland) telling people you were coming up the home straight will make 4th June one of the most memorable experiences (there’s that word again) I will ever get on on a bike.

Simon Pitchford from my own Fenland Clarion club was the winner of the event with two rocket propelled laps.
I managed a consistent 1min26 an 1min29 for my two laps of the 1.2km track.

But time and the result was irrelevant, it was all about making club cyclists feel like world beaters for an afternoon and in that respect the Tour Series won hands down.

Going back in the evening to watch the pro race was just as great (especially as their first few laps were 1min30 pace!!!) and to see such a huge crowd watching the sport I love in Peterborough was just brilliant.

Sadly Malcolm Elliott couldn’t bookend the event with a win, having (if my memory hasn’t dimmed) crossed the line first in the Kelloggs event in 1991, the last pro race on the city streets.

On that night I was a teenager in a Marshalls jacket dreaming of getting out on the course myself. It has taken a lot longer than I had hoped, but it was truly worth the wait.