Be Realistic: Ask the Impossible! On the Road to the 2011 Etape with a Sportive Virgin 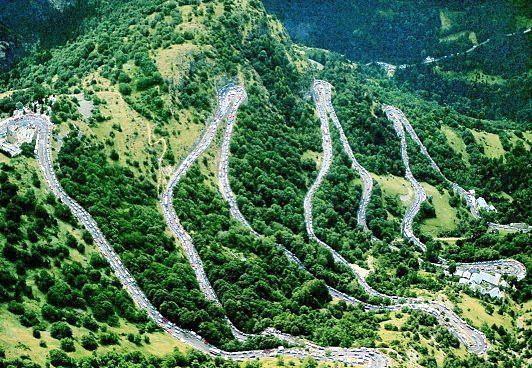 I started writing a personal blog just over a week ago now (here) to detail my preparations for the coming year's foray into sportive riding-culminating in the Mondane-Alpe d'Huez leg of the Etape du Tour on July the 11th, and now also including the Etape Caledonia in Pitlochry on the 15th May for Macmillan Cancer Support as well as the Skye Mor sportive on the 28th May by way of preparation...

As a self-confessed sportive virgin it was really just intended to be a kind of personal journal charting progress for my own gratification, but I've since been asked by the lovely folk at road.cc if I'd do a weekly submission for the site to give an insight into the trials and tribulations that as a relative newcomer to the cycling I will be facing along the way.  This will inevitably cover everything that noobs like me as well as more experienced riders encounter in the quest to improve their performance regardless of ambitions, be it training, nutrition, equipment, or just summoning the motivation to drag weary bones out of bed on a cold winter morning!

So, by way of introduction I'd like to tell you a bit about myself and what I'm hoping to do and achieve in the coming months.  I'm 27, originally from Scotland, and have been a casual cyclist for the last couple of years, becoming more and more interested in the sport to the point where I'll happily annoy my girlfriend by spending hours watching the Tour de France, talking about riding, or spending too much time and money tinkering with my bike.

I cycled as a kid but not road/competitive cycling, and hadn't touched a bike for about 10 years until in a rather tumultuous period of my life I picked up an old beater, and spent hours stripping, cleaning and re-assembling every part, in the process finding a sense of calm and purpose that was much needed at the time and has been cultivated ever since.  I've moved around a lot over the last few years taking me to France and Spain in search of gainful employment, and in the last few months of constant job searching back home in the UK it has been a massive challenge mentally to stay positive and focused when spending hour after hour glued to a computer screen searching and applying for job after job with no returns.  In particular the lack of daily routine/structure and a feeling of purposelessness has been a huge problem, to the extent that even getting myself out on the bike for a casual pootle was tough.   I'd like to challenge myself a bit more and tackle more serious rides than my normal 60 milers over the surrounding hills, and in signing up for the Etape I am hoping that the experience will spur me on and give me the drive, focus and purpose I need to hopefully unstick the areas of my life that are currently feel as if they are in standby mode, as well as getting fitter, healthier and taking my level of riding from that of the bandy-legged, granny cogging occasional rider to one capable of taking on 100 mile courses in the big ring and finishing at the better end of the field (though being naturally over-ambitious I will probably end up aiming for a top 10...).

I know a fair few people who are cyclists of varying degrees of seriousness, two of whom tackled the Etape this year for the first time which allowed me to follow their evolution in the run up to the big event, and give me an idea of what is required and the commitment and preparation it involves.  From here I'll be doing my own research and trying to build up an effective training routine, diet and setting regular targets for improvement leading up to the Etape, and since I'll be writing the blog here I'm hoping that at the same time as serving as an inspiration or encouragement to other riders who are perhaps interested in upping their performance or taking on bigger rides, I'll also be able to benefit from the wisdom and enthusiasm of the more experienced road.cc'ers as well!

With Christmas on the way, several feet of snow on the ground, a few hours spent sweating it out on the turbo (and a few more hours in the pub undoing the any of the benefits) I'm already seeing that it will be anything but a walkover!  So, the 8 months ahead are pretty daunting and will certainly require a huge amount of hard work and commitment, both in terms of physical and mental preparation, but it's also an incredibly exciting prospect and a challenge I'm hoping will be as enjoyable as it is beneficial.

Wish me luck and I hope you'll enjoy these weekly updates on road.cc as well as the more sporadic updates over on my blog as well.