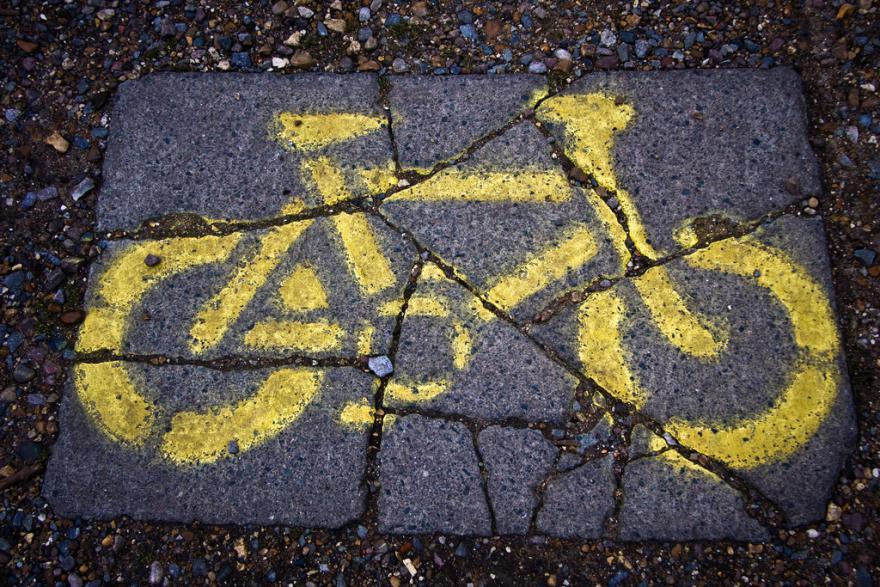 broken-bike (CC BY 2.) by Garry McKnight on Flickr)
Bikes and components occasionally fail - especially in races - here's some thoughts on why that happens and some advice on how to minimise the risks of it happening to you

The bike failure that caused Simon Pellaud’s dramatic crash in the final sprint  is a reminder that stuff breaks sometimes. Despite the sudden failure of this bike, he still managed to cross the line in fifth place.

What are we to make of this bike failure? Probably nothing, other than it serves as a reminder that bikes and components can fail from time to time. Just like a car can break down for no clear reason or the office printer refuses to work.

When a bike or component breaks human error is usually to blame - where in the chain that leads  from the designer,  through the builder, then mechanic, to finally the rider determine how much other riders of that particular bike or component have to worry. Usually any human error involved is much closer to the end of the chain than the beginning. When the error is at the front of the chain recalls and lawsuits are the consequence – and bike companies are very keen to avoid those so have all sorts of systems and mitigations in place to guard against things going wrong in the process of designing and building a bike. Of course sometimes, thankfully rarely, they still do.

We have no details about the incident involving Pellaud's Bianchi, what led up to the failure and what happened in the aftermath. The internet can and will speculate, lay the blame at the bike brand or the choice of material, carbon fibre in this case.

From watching the video a few dozen times, we can determine it’s a Bianchi Specialissima and the failure has happened where the stem clamps the steerer tube. It doesn’t appear the rider was sprinting before the sudden failure, but it does fail suddenly and without warning, as carbon is prone to.

This area of the steerer tube is under a lot of stress. If we are to speculate, it could be a result of stem bolts done up above the recommended torque settings. That would lay the blame at the rider or mechanic, rather than the bike brand.

Many years ago Trek issued a reminder specific to carbon steerer tubes following a number of steerer tube failures with its Trek Madone in 2010. It stated that a torque wrench should be used, only the recommended stem fitted, and spacers should be added above and below the stem. It specified a 5mm spacer above the stem to prevent the stem from creating a stress riser on the steerer tube. We all know that racers love to “slam” their stems and spacers usually get chucked in the bin for aesthetic reasons.

Bianchi also issued the same advice a couple of years ago about a 5mm spacer being used above the stem [interesting because we'd assume it would make more difference below the stem]. On its website Bianchi says: “Bianchi has recently learned that stem assembly’s on some bicycles with a full carbon steerer tube may have been incorrectly assembled with spacers above the stem totaling [sic] more than 5 mm.  Bianchi is requiring all consumers that are using bicycle stem assembly’s with this configuration on a full carbon fork to immediately stop using your bicycle and inspect your fork for damage and proper installation.”

This could support our hypothesis that incorrect installation led to the steerer tube snapping. If not, then we’re looking at a manufacturing problem. But the Bianchi bike in question has been around since 2015 and surely any problems would have arisen by now? https://road.cc/content/review/170534-bianchi-specialissima

A Trek bike was famously involved in the 2006 crash of George Hincapie at Paris-Roubaix, when his Trek 5200 failed in very much the same way at this more recent incident. That bike was modified with a cantilever-brake-compatible fork from a Trek hybrid bike, that had an aluminium steerer tube, and Hincapie had crashed earlier in the race and kept going.

We’ve contacted Bianchi for a statement and are awaiting a reply, and it’s no surprise the picture of the broken bike posted by Simon Pellaud (who is okay by the way) has vanished from social media. Hopefully Bianchi can launch an investigation into the cause of the failure and share its findings, we’d love to know the exact reason and put to bed this speculation.

Should you be concerned about a sudden fork failure? It’s obviously imperative that your bike is assembled following the manufacturers instructions and using the correct torque settings. But other than regular checks how are we likely to be able to detect a failure before it can lead to a crash? You’d need a scanning machine to detect early signs of fatigue in a carbon steerer tube.

But since that famous Hincapie crash, the UCI has stepped in with testing protocols based on safety, and there are international standards that bikes must meet to ensure they are as safe as possible. But it’s a reminder that there is always a risk involved and no easy solution.