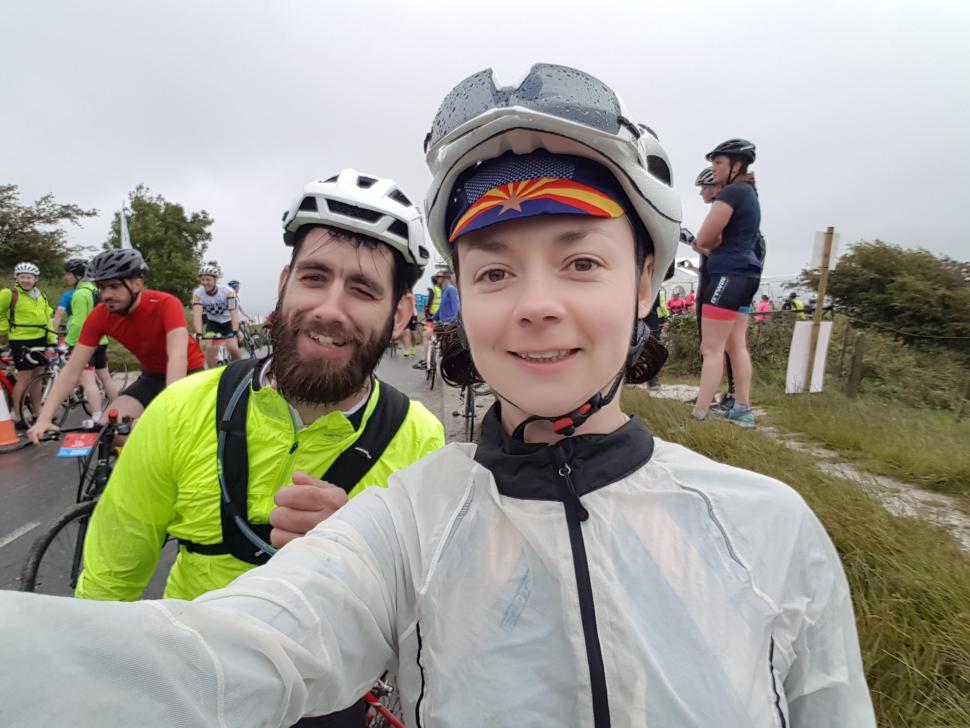 Laura and John atop a rainy Ditchling Beacon
It was a rainy one, but one heck of a day out

I was in the middle of a bid to appease the great and looming god of future cycling pain – the Deloitte Ride Across Britain – with weeks of lesser pain, in the form of a lot of cycle sportives and weekend rides.

Honestly I was in a bit of a slump with training when the London to Brighton bike ride came along, mid-June.

In case you don’t know it, the annual event involves a lot of people cycling 54 miles to the coast, with Ditchling Beacon, atop the beautiful green wall of the South Downs, the big climb somewhere near the end.

I’d dragged myself out of bed very early, and part cycled, part took the train to South London,  identifying a fellow rider on the way, at Aldgate. We introduced ourselves, he's called John, and we rode to Clapham, via another train, where we ended up regrouping at the start line, before deciding we may as well ride the thing together.

It was a good decision; John made me feel instantly cheerier. Although the bike was clean, shiny and its chain degreased and regreased I was, in all honesty, feeling a little less chipper.

The ride fell this year on Father’s Day; I’d lost my father suddenly to a heart attack when I was 14 – and he was just 49. Certain dates are still hard, sometimes surprisingly so, and the overwhelming and touching presence of the British Heart Foundation, the event organisers, and the odd T-shirt with a message and a photo dedicated to loved ones lost by heart disease, added to the general feels.

As for John, he's an easygoing, bearded man from Rainham in Essex, who is a MET technician, which means he fixes the bodywork on fancy cars for a living.  This was his second year riding London-Brighton, and he’d pledged to do ten in a row. A mountain biker under normal conditions, this was the only time all year he’d ride road.

It’s easy to see why John loves this event: London to Brighton, a long-established event, is a bit different to other sportives. It is perhaps one of the original sportives, notable for its relaxed atmosphere, populated with all sorts of people atop all sorts of bikes, from shopping bikes with three gears, to Bromptons, to old racers and hybrids. To me, cycling should be fun, and for everyone, and this was clearly a fun bike ride to the coast, not a race.

John and I were excellent riding companions, and we enjoyed riding at the same pace, making silly comments and observations as we went, and we both love chips (though who doesn't?).

The route meandered through part closed roads, part stop-start traffic out of London. Soon enough we were on country lanes and A-roads, with a few little climbs thrown in for good measure.

After a while, the sky darkened and it started to rain. Rain hadn’t been forecast so we assumed it wouldn’t last. After a few minutes’ heavy drizzle, though, I put on a jacket. Then it eased off, and we stopped to take our jackets off again.

Marshals with loudhailers called out for us to slow down on slippery descents. I didn’t need telling twice: I was once overtaken on the descent into Brighton by a woman riding a 1970s folding shopper bike, in the dry, to the loud dismay of my riding buddy.

The rain started again, and after some minutes we decided to forego the on-off jacket dance, and do without. It was warm, and we were convinced the rain wouldn’t last.

A young man on a chopper whizzed past us playing loud dub music; he became a regular feature for the next few miles, pedalling furiously past us, then back again. There was another man riding a large, heavy-looking commuting bike because his new road bike had been stolen, days after he’d bought it. He'd fly past us on descents but his climbs were agony.

The rain got heavier, and set in. Water poured off our helmets when we looked down. My long-sleeved jersey hung off my arms, dripping. Lovely weather, I quipped, at a food stop. One man, who clearly wasn’t enjoying himself, remarked how much he couldn’t stand middle class people. To be fair I probably was a bit annoying.

John’s legs ached and we stopped briefly, just before the Ditchling Beacon ascent, to stretch. The rain eased up, but we were soaked and soon shivering. We set off with chilly legs and I lost him on the ascent, though the last of a recent Snickers sat heavy in my stomach. Many riders walked even the mild ascents, so this was the battle royal between human and hill. Halfway up, one man was calling loud encouragement to a woman giving it more than I’d seen anyone give a hill. I wanted her to make it, but eventually, heaving, she shouted a sharp, “No!” and stopped. If there were a medal for sheer force of effort, she deserved it.

As we ascended, one man called out ‘on your right’ as he tried to squeeze by a large block of crawling riders spread out across the road, who proceeded to bump left, one into the other, like dominoes. No-one actually went down but they lost their momentum, and had to stop – the last thing you need when you’re in a rhythm. I slogged on, and before I knew it the trees opened up and the grassy hilltop came into view.

John and I regrouped at the summit, by now, miraculously, almost dry. We donned our jackets and began the ascent. A fan of cheerfully heckling strangers, I yelled ‘haha!’ to passing riders, in delight at reaching the ‘it’s all downhill from here’ point.

We decided to go for the sprint finish, or as much of one as our tired legs could muster. After the long descent into Brighton we reached the final, flat, fenced-off section of road on the seafront to a rush of endorphins, laughing and pushing our way over the final metres of tarmac and the finish line, with people cheering at the roadside in the warming sun.

Hats off to the British Heart Foundation: the event organisation was great, the marshals friendly and supportive, there were plenty of pitstops along the way and it was easy to stay on the route and motivated – even in a downpour. I can’t recommend it enough.

Registration for next year’s event is open. To find out more visit the website, here: visit: https://www.bhf.org.uk/L2B2020