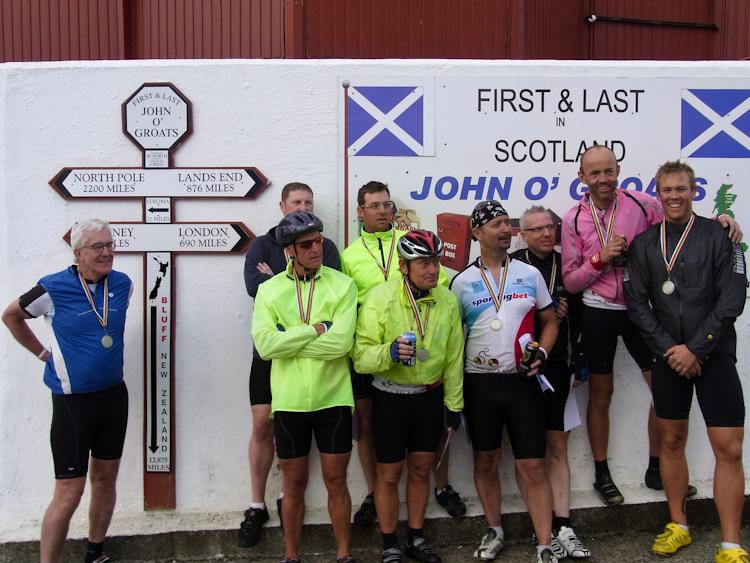 I left you at the top of Helmsdale with me crowing in a triumphant and doubtless rather vulgar way about my unprecedented fitness levels. A man of my age should have known it’s unwise to crow.

Just around the corner from Helmsdale is its evil twin, Berriedale, a shorter but sharper ascent that some might say is a bit of an unnecessary additional climb but others would probably describe as the true test of hilly manliness. I suppose the way a cyclist would describe it might depend on whether they raced up it and, if so, whether they won.

Well I did, sort of, and I didn’t (win, that is). However much he joked about it, my little Hobbit friend Simon was clearly annoyed about the trouncing he’d received on Helmsdale and I could sense his determination to turn the tables. But after my efforts on Helmsdale – which hadn’t come all that long after the dash into Golspie – I just didn’t have another one in me so after trying for a bit to see how serious he was, I let Simon go with a falsely cheery wave and a muttered curse halfway up Berriedale.

From there it was a mere 30 miles or so to John O’Groats itself, through Wick and then around Sinclair’s Bay. The weather was still perfect – that brisk breeze stayed faithfully at our backs throughout and the skies were pretty much clear. It was pushing 8pm by now and, although the sun was still remarkably high in the sky, the light was starting to soften and the shadows lengthen. We couldn’t have asked for better conditions for the final run-in.

Pausing momentarily at the sign marking the boundary of John O’Groats, we cycled in slowly together, all of us – Darren included. We were also accompanied from Wick by Don, our invaluable bike fettler friend who’d been tirelessly tweaking from before we got up to after we went to bed each day.

Despite the jokes there’d been from the outset about last second glory dashes for the line, we all knew that The Race Against Time isn’t in fact a race at all and that we’d therefore cross the line together. But as we tried to ride nine-abreast down that final hill it became clear this wasn’t going to be possible so we kind of flopped across the line in dribs and drabs.

The euphoria was as brief as it was intense. For 15 minutes or so we clattered around with huge grins on our faces, swigging Prosecco from the bottle (thus ending my six-month dry period), shaking hands and hugging and congratulating each other. Then there were photographs, then there were fish and chips, then there was a medal and certificate ceremony and then there was shivering and barely containable impatience as we longed for hot showers and fresh clothes.

The Youth Hostel at John O’Groats is an odd little place, full of end-to-enders either starting or finishing their journeys. Half of the residents are tense and focused, the rest floppy and delirious. We were asked to keep the noise down and go to bed at 11, so we did. And that was that.

Everything since has been touched by a feeling of anti-climax. I sat for the best part of two days in a seat made for a ten year-old in a minibus inching its way back down south. I was dog tired, slightly nauseous and emotionally as flat as a pancake. My spirits soared when I saw my family at Watford and they soared again when I realised a surprise welcome party was on the cards at my home, but they soon dipped again and they’ve been pretty low ever since.

My fellow riders all feel similarly and I’m told it takes a week or more to stabilise. This doesn’t surprise me at all.

But it will pass and when it does the sense of achievement will still be there. The strength and contentment of knowing we can go beyond our comfort zone and still perform won’t go away. The memory of all those hysterical endorphin-fuelled outbursts of giggles and the incredibly deep sense of camaraderie that we generated despite barely knowing each other will last a lifetime I hope. Friendships have been made, personal transformations effected, bodies forever changed – it’s been a truly amazing experience and I couldn’t be more pleased that I signed up for it all those months ago.

I’ve said before that none of this would have been possible without the tireless efforts of the race organisers and support team. We were cosseted and indulged, fed like kings (despite eating like pigs) and endlessly ferried from pillar to post without complaint. I’ve named the backroom heroes already, but a final mention must go to Allan Flowers and Ashleigh Thompson, without whose remarkable efforts the whole thing would most certainly fall apart.

Allan and Ashleigh, we salute you.

And the best news of all? Between the nine of us we raised something like £27,000 for the Bishop Simeon Trust. To put that into some sort of context, I’ll steal some words from one of Allan’s newsletters (when that figure was still hovering around the £25K mark):

The sponsorship total for this year’s ride is now nudging £25,000 in total – awesome! So how might this be translated into improving the lives of those the Bishop Simeon Trust are seeking to help? Well, whilst it is impossible to give a definitive answer, I can show some of the ways £25,000 could be spent. It would include not a selection from the following list, but each and every item.

If you want to help nudge that figure any higher, there’s still time.