Anatomy of a lie: How Guide Dogs London fabricated an attack on cyclists 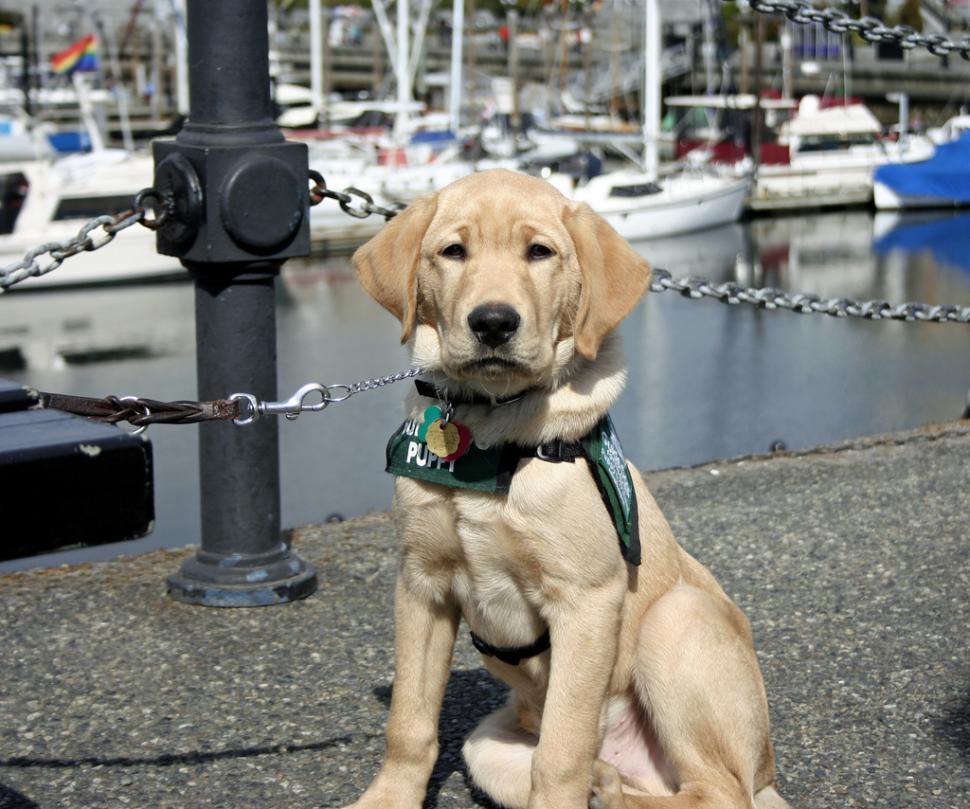 Yesterday road.cc, and just about every other media outlet you can think of, ran a story about how one in four London guide dog owners said their dogs had been hit by cyclists.

The Evening Standard reported the story with this opening paragraph:

"Cyclists are increasingly smashing into blind Londoners and their guide dogs after mounting the pavement and jumping red lights, a charity warned today."

And many outlets used a comment by Robert Harris, London engagement manager for Guide Dogs. Harris said: “We work incredibly hard to get blind or partially sighted people out of their homes and mobile, so to hear that vision impaired people are anxious and in some cases fearful about going out in London because of irresponsible cyclists is very worrying."

On the face of it, this is terrible stuff. The blind are, rightly, a group for whom everyone has sympathy. Making your way in a world full of text and fast-moving objects when you have little or no sight is extremely hard.

So, pressed for time as journalists always are, the bald assertions made by Guide Dogs were reported verbatim. Talk of "irresponsible cyclists" "smashing into" people after "mounting the pavement and jumping red lights" is standard anti-cycling media fare. Easy to bang it out and not question it.

Over the course of the day, more of the background started to emerge. You might think that Guide Dogs London was acting on a vast number of reports of issues with cyclists. Perhaps they'd polled a significant sample of London's 41,000 blind and partially sighted people to find out what problems they had getting around, and been told by a large number that cyclists were an issue.

Not so. The one in four figure comes from a self-selected online survey and represents just 14 people claiming they or their dogs had been hit by cyclists.

Here, for example, are a couple of tweets from London Guide Dogs: 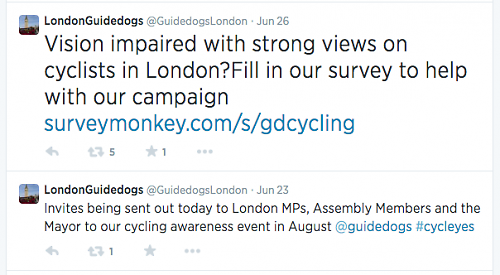 That survey has since been taken down, so there's no way of knowing to what extent it used leading questions to get the responses London Guide Dogs were looking for, but those tweets are not the words of impartial researchers.

The signs of dodgy research were there in Guide Dogs' original announcement of the 'CycleEyes' campaign.

It speaks of a "a noted increase in guide dogs and their owners being hit by a bike or having a near miss."

"Most of these reports," the organisation said, "come directly to Guide Dogs verbally."

In other words, Guide Dogs had nothing but the impressions of its staff that blind people were having more problems with cyclists. It's perfectly feasible that this is something researchers call 'expectation bias'. You become aware of something, and suddenly you start seeing it everywhere.

So, Guide Dogs London set up a survey on Survey Monkey and got results that it presented thus:

"Of the guide dog owners who responded, 42% had been involved in a collision with a cyclist and 76% have had a near miss when cyclists either ride on pavements or skip red lights at pedestrian crossings."

The reaction of one guide dog user I mentioned this to was: "How did they know, they're blind?" Well, quite.

Guide Dogs initially claimed one in four of London's 320 guide dog users had been involved in an incident in which a cyclist hit their dog.

A footnote to the release about Guide Dogs' campaign vilifying cyclists, however, admits:

"Through social media we invited blind and partially sighted to fill in a Survey Monkey. 33 of those who responded were guide dog owners from London, 42% of those have been involved in a collision with a cyclist 76% have had a near miss (defined as where they have narrowly avoided a collision)."

42 percent of 33 is 13.86, which indicates a) it's really stupid to turn such small numbers into percentages even if it does make your wholly useless survey look all sciencey and b) as I mentioned above, this whole campaign is based on just 14 people complaining.

Think about that. London is home to between 8 and 15 million people depending on how you count them and how you define 'London'. You could pick any two random groups of people among that vast population, ask one if it had had problems with the other, and get 14 complaints. Ask Lithuanian redheads if they'd had bad experiences with German shepherd dog owners, and I bet you'd get 14 tales of woe.

Can you imagine the response you'd get if you asked people with "strong views" about, say, immigrants to fill in a survey?

And they're not just complaining about something that happened recently. Guide Dogs does not appear to have set a time scale on its trawl for trouble, so those incidents could have happened any time in the last couple of decades.

By sloshing around its deeply dubious numbers, Guide Dogs was able to get all sorts of people who should know better on board with its anti-cyclist campaign.

Here's Charlie Lloyd from the London Cycling Campaign for example:

And Lib Dem group leader on the London Assembly - and cyclist - Caroline Pidgeon:

Lloyd said: "I don’t know if it was a stitch up or a cock. The absurd casualty stats were quickly withdrawn."

That may be true, but by then it was too late. Stories like the Evening Standard's had been written, and what corrections were made were minimal, and usually at the end of stories.

As for London Cycling Campaign supporting a the campaign, it's hard to say they weren't very naive in failing to see how the story would be told in the mass media.

"Our involvement was based on the fact that there is a real issue with the way some cyclists intimidate pedestrians," Lloyd told me in an email.

"The other consideration is that many in the Guide Dogs movement wish to block some of the infrastructure that will help make London safer for cycling.

"They have strong opposition to floating bus stops, even though there are thousands of them across the UK where old style footway based cycle routes pass bus stops. We think it is worth while working with blind people to discover the best design for floating bus stops in London."

What's deeply troubling about this sorry tale is that Guide Dogs chose to target another group of vulnerable road users instead of taking on the source of risk to all: bad drivers and London's abysmal road system.

Road traffic danger limits everyone's mobility, and its main source is motor vehicles. But Guide Dogs doesn't have the gonads to say that London's awful roads keep partially sighted people from getting out and about, because like everyone in their position they think of traffic as being like weather: it just happens and nothing can be done about it.

Far easier then, to go after cyclists, knowing that the mass media won't question that "irresponsible cyclists" are "smashing into blind Londoners" than to demand London's roads be organised for the convenience of people rather than motor vehicles.