How not to be a knob to female cyclists 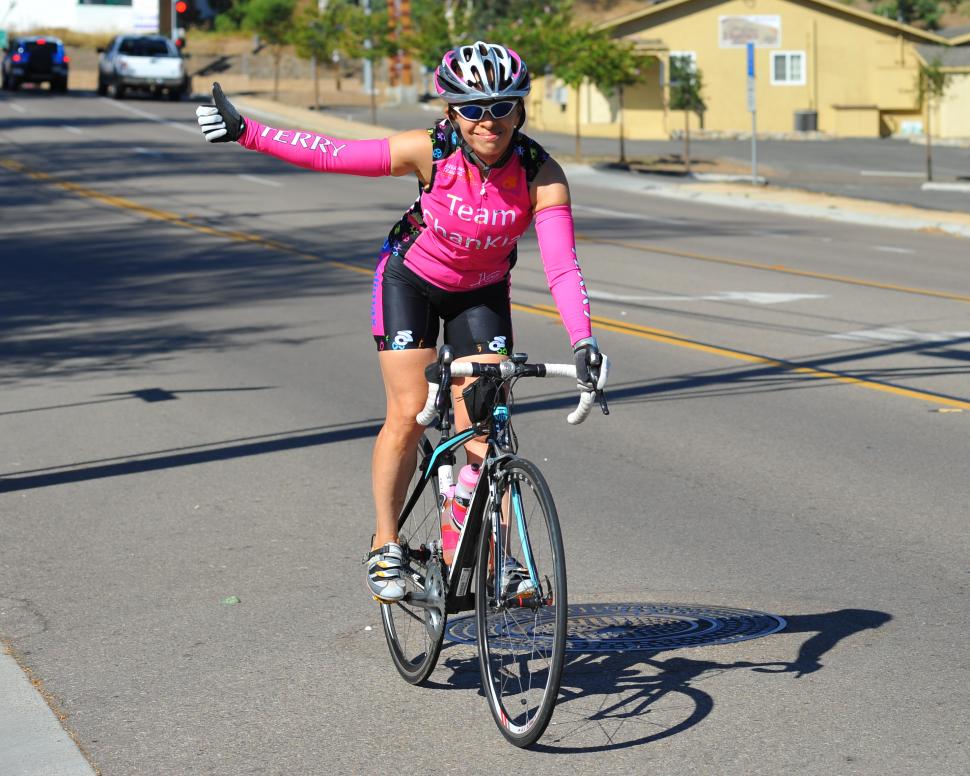 This week a BT Sport survey found that 80 per cent of women athletes polled felt pressure to conform to a certain look and body type.

Hold that thought for a second - the vast majority of athletes, women at the top of their game physically, are facing pressure from the media, social media, coaches, sports officials and other athletes to look a certain way - as Rebecca Adlington put it on that jungle programme through a curtain of tears: ‘stick thin, big boobs and a pretty face.’

76 of the athletes said their behaviour had been influenced - so they might change their diet (87 per cent), or their training (58 per cent). One athlete said she developed an eating disorder, while another said: “Sometimes it has meant my diet no longer is optimum for performance but becomes optimum for looking slimmer/thinner....which isn't my body type.”

Perhaps some of the pressure comes from the way women athletes are constantly being pursued to pose naked - although perhaps the highest profile British woman pro cyclist, Victoria Pendleton, didn’t seem too concerned about going nude in GQ magazine before the Olympics.

“I don’t suppose it does bother me really,” she said. “I have done a few sexy photoshoots, I’ve been told I’ve got a nice bum, plus when I compete I am wearing a skin suit, so really, what’s the difference?”

Having said that, she’s also said that she was ‘saddened’ to have her muscles airbrushed out of media images, to make her look ‘more feminine’, and told BT Sport this week: “I think that it would be really valuable if women were celebrated for their achievements more.”

It’s easy to think these superstars should get over it - stop looking at the abuse on Twitter, ignore the insecurity and think of the pound signs - but there’s a more insidious side to all of this.

Women already battle a number of reasons not to get on a bike every day. From bike shop assistants who don’t understand women’s cycling needs or patronise them, to employers who don’t provide showers or decent changing facilities, to clubs that don’t know how to cater to women, to traffic fears when cycling with children - the list of reasons not to get onto a saddle can seem endless.

The Australian Heart Foundation’s report into women and cycling last year found the need to transport children and cycling clothes being unfashionable were the reasons a third of women gave for men cycling more than them.

Whether or not you think these are valid excuses to choose a car over a bike, it’s hard to argue it’s a good thing these women aren’t cycling.

So let’s not give women any more reasons to leave the bike at home.

1. Do not fetishise her

Women on bikes don’t want your pervy comments any more than they want your rude ones. Victoria Pendleton probably gets a tiny bit of sick in her mouth every time some guy tells her how much he likes to look at her in cycling shorts.

Many women already feel self-conscious putting it all on show, so make like you haven’t noticed it, okay?

If you have some creepy thing about tight Lycra, keep it to yourself, or look online for some like-minded weirdos to share it with instead.

2. Do not harass her

I know you might not be one of them, but those guys exist. The ones who shout things out of car windows, or worse, film your arse as you ride along (yep, it happens). Don’t do it - it’s probably illegal and it’s never ended well for any guy who’s tried it with me.

When we review women’s clothing at road.cc, we do it so women know whether a bit of gear is worth forking out for. When we photograph a woman wearing it, we do it so she gets a vague idea of whether she likes the look of it.

What we don’t do is photograph it so you get to leer all over that woman in tight clothing, comment on whether or not she is ‘really’ a cyclist or suggest some super-helpful diet or exercise tips for her to look more like a ‘real’ cyclist.

Besides being unpleasant for the woman in the picture, take a second to think about how an 'ordianary' woman thinking about taking up riding is going to feel about the reception she might get.

4. Don’t put mean comments under reviews of men’s clothing, either

One of our male reviewers often gets mocked for being too skinny, and some bloke last week decided to point out that he doesn’t have 'proper cyclists legs' - which was quite funny as he's just got a semi-pro contract with a Belgian team for the season.

Just don’t body snark - it just makes you look like a dick.

If you see a woman (or a man) getting abused for any reason, do speak out. Tell that person their Tweet wasn’t cool. Call out the pervy guy on the club run. The person on the receiving end will be grateful and if 0.00001% of knobs change their attitude because of what you said, that’s still progress.

The girls you know who cycle might really want your advice on what protein shakes to have for breakfast, or how sprint intervals will make them leaner, or whatever. If they want it, they’ll ask.

If they don’t, they’ll just carry on riding whatever bike they chose, wearing whatever they picked out for the purpose, eating whatever tastes good. But thanks for your concern.

*There are probably loads more ways not to be a knob to women on bikes. Feel free to add your own in the comments below.