Strava has brought back chronological ordering, and allows you to 'favourite' athletes

As part of a wave of new updates, Strava have responded to what they say is "one of the most frequently requested ever" changes, and will let us see the newest activities first again...
by Jack Sexty

It's been a busy 2020 for Strava so far, with plenty of new features announced including updates on the fly and improved privacy settings, but perhaps the most welcome of all will be a returning feature... the return of chronological ordering, so the most recent activities once again appear at the top of your feed instead of the stuff Strava thinks you want to see first. Rejoice!

Chronological ordering was discontinued on Strava in 2017, going the same way of the Facebook newsfeed by arranging activities in order of relevance... well, what Strava think is the most relevant to you anyway.

That's now changing, as a long long thread involving almost a hundred of Strava's 50 million users calling for it to be changed back was answered by a Katie, just past midnight UK time:

"You’ve been asking about this for a long time, so we’re thrilled to finally give you control over the order of activities you see in your feed.

"We’ve added in a choice to see activities in the chronological order they were completed. For more information please see our help articles on Feed Ordering and Following Athletes on Strava." 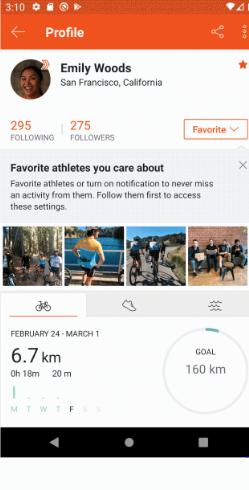 To change to chronological from Strava's mobile app, simply select 'Profile', then 'Settings', then you'll find the 'Feed Ordering' option. On desktop there's a drop-down under your profile pic, where you can alter display preferences.

If Strava knows you best then you can still choose the 'Personalised' feed order, and if you do go back to chronological then it will only apply to new activities, which means you might not see the difference at first. They've also gone one better by allowing you to customise further with the introduction of 'Favouriting' athletes; for example, you can pick to have a mostly chronological feed but pick a select number of Favourite athletes, and their activities will appear towards the top regardless of feed order.

Another significant change is improvements to Strava's auto-detection prevention algorithm: "From now on, we’ll be working to cut down on the number of leaderboards that are clearly inaccurate and unfair. To do this, we improved the algorithm behind our auto-detection of segment records that aren’t quite right", say Strava. Essentially, it'll be much harder for a chancer on a motorbike to bag the KOM you worked so hard for without it getting flagged instantly, or mistakenly picking up loads on the drive home from a mountain bike ride (read more about that on off.road.cc).

Finally, Apple Watch users can now sync directly from the watch via the Apple Health App, meaning no more duplicates between the two.

You can head over to Strava's latest blog post about the updates for all the details.