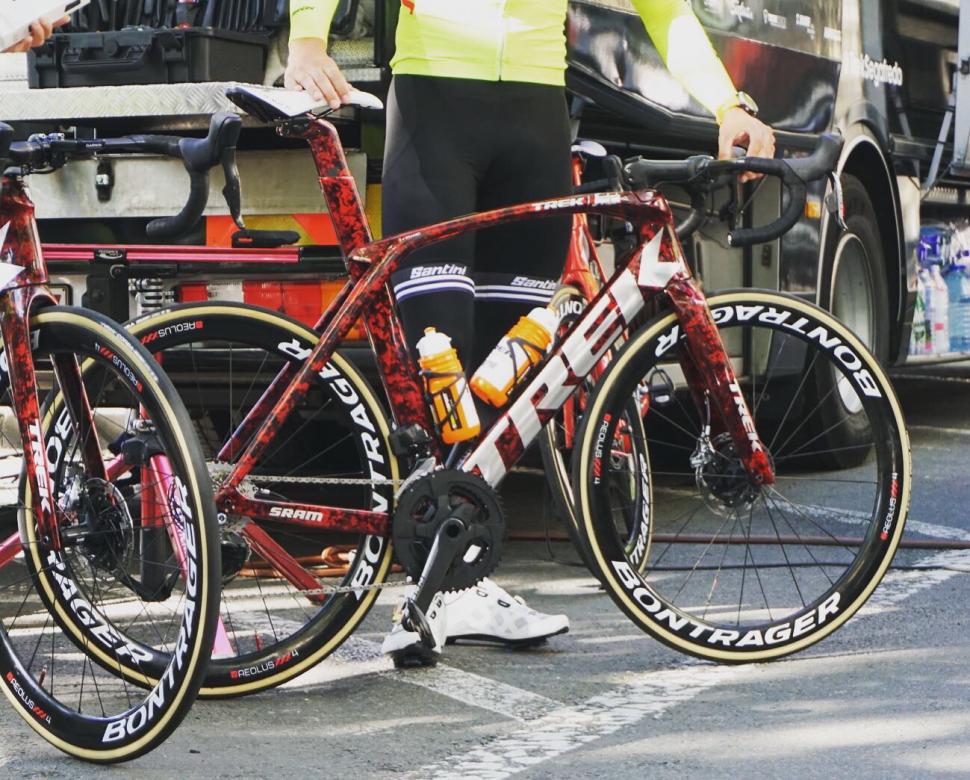 Some of the coolest new things we spotted at the Tour this year...
by Jack Sexty

This week's five cool things comes to you from Brussels, where we've picked out a few bikes and bits we found particularly interesting while snooping around the team hotels. While not all these goodies aren't available to the public, we've suggested equivalent products you can buy yourself if you want to (almost) own a bike like the pros... 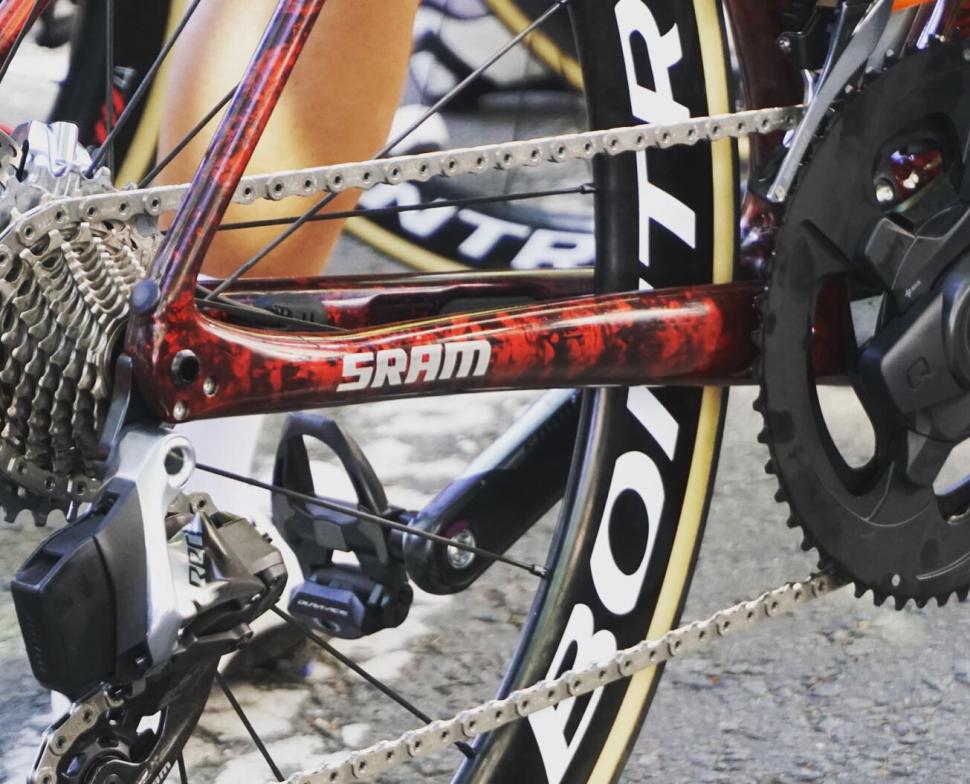 This super cool mahogany effect paint job was turning heads at the Trek-Segafredo camp, appearing on their Madone and Emonda bikes. This one was dressed with SRAM's 12 speed Red Etap AXS groupset and bontrager deep rims - the groupset also appeared to have non-standard chainrings, possibly in bigger sizes than is offered by SRAM on their one-piece AXS chainsets.
We haven't seen the frame in this colourway for sale, but you can buy a stock Trek Madone in various specs. 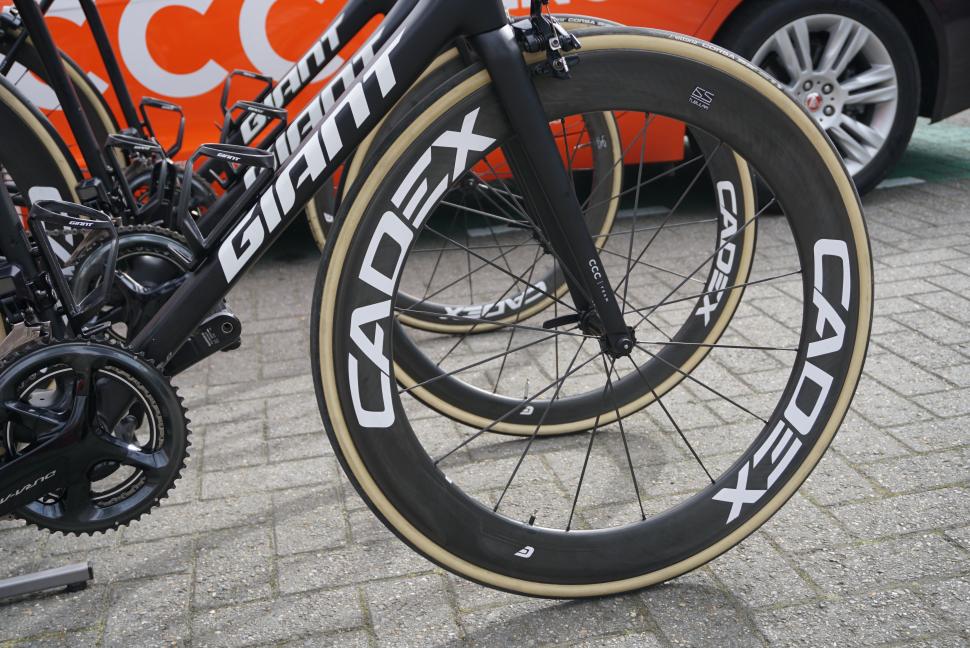 Giant's new high-end component brand has launched, and this is a pair of their 65mm deep tubular wheels on a CCC Team pro bike. They've been developed with input from Greg Van Avermaet, Marianne Vos and triathletes including Sam Appleton. There are also plenty of tubeless-ready wheelsets in the range with depths ranging from 42mm to 65mm, for disc brakes and rim brakes, and thre is also disc and four-spoke front wheels for time trials and triathlon. The wheels are set to go on sale through various retailers in late September, along with a saddle and range of tubeless tyres - we don't have RRP's yet. Look have recently launch these Tour de France special edition versions of their Keo Carbon Blade pedals, complete with ceramic bearings and a titanium spindle. This is the first time we've spotted them in the wild, appearing on Dan Martin's Colnago V2-r. You can buy these exact pedals for a princely £239.99 on Wiggle currently. 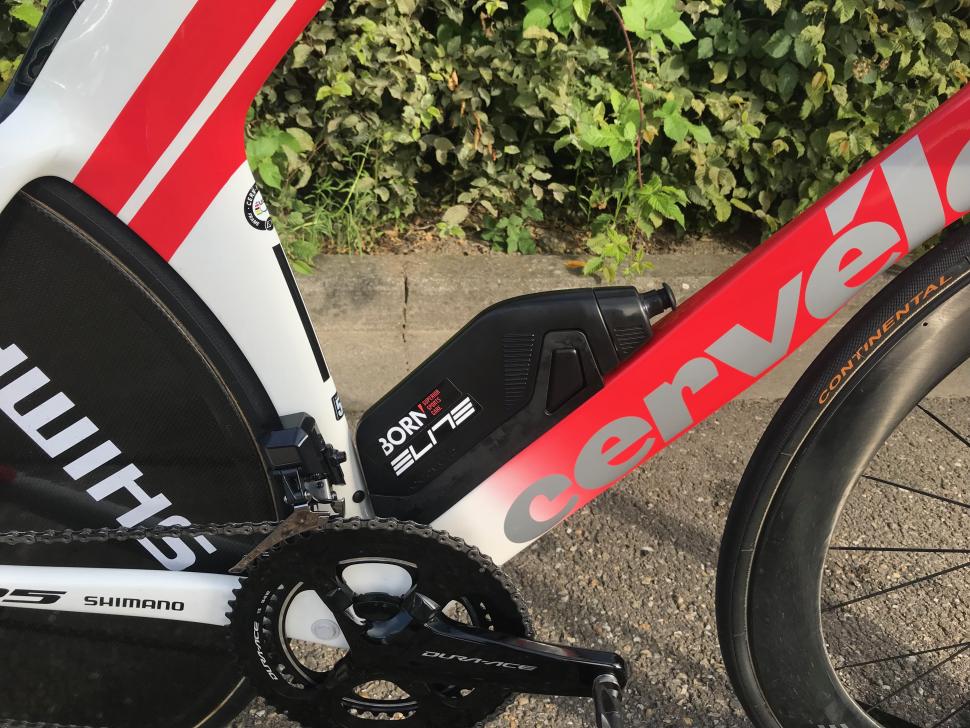 We spied this brand new bottle and cage adoring a Cervelo P5 time trial bike at the Sunweb camp, and can confirm it's not yet supposed to be public knowledge (don't tell anyone you saw it here). The bottle appears to be snapped into place on the cage, with the shape of the bottle matching the downtube to prevent it from creating any drag. While we expect to get details about this new version fairly soon, Elite's current aero bottle offering is the popular Chrono CX cage and bottle kit. We also noticed what appears to be a different version of Pro's popular stealth saddle on Michael Matthews' Cervelo S5 aero road bike... and Shimano have now confirmed that it's slimmer and lighter than the regular Stealth with a one-piece carbon rail... A new manufacturing technique has allowed for seamless integration of the rails into the carbon base material of the saddle, resulting in a 15% reduction in weight at just 147g. The central cut-out remains and Pro have also tweaked the cover material to make for greater sit bone comfort.
No news on availability of this version yet, but you can buy the original version of the Stealth with carbon or hollow steel rails.

Keep an eye out for plenty more Tour tech on road.cc over the coming weeks!