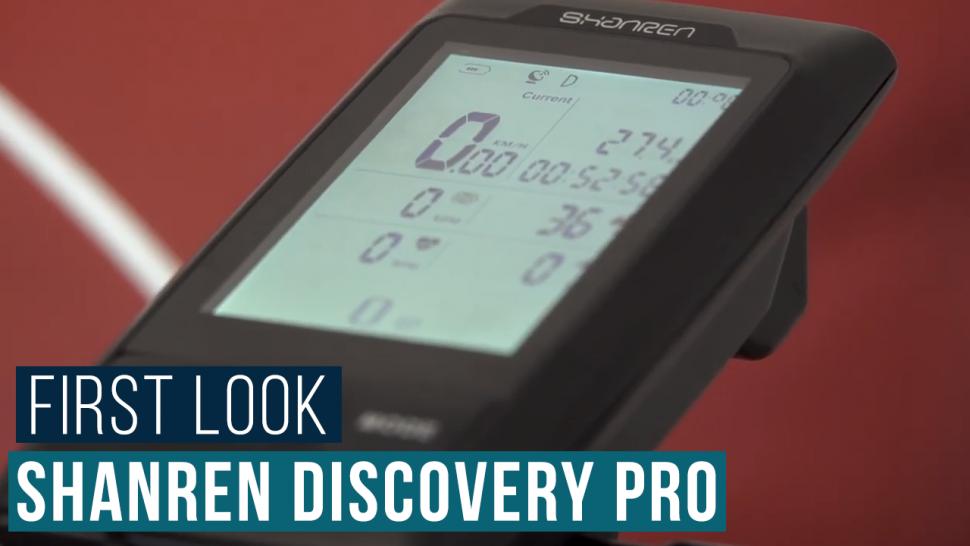 The new computer was recently crowdfunded into full production via a very successful Indiegogo campaign, and we've had a play with a test unit before they start shipping out to backers...
by Jack Sexty

We’ve seen a lot of GPS devices and gadgets go in and out of road.cc towers over the last decade, but the Shanren Discovery Pro could be about to blow them all out of the water with regards to battery life. It also has built-in lights, is fully ANT+ and Bluetooth-ready and was recently crowdfunded as part of a successful Indiegogo campaign.

They claim it can keep going for a whopping 96 hours, which is double that of any other GPS we've previously tested (that one being the Lezyne Mega XL, you can read the review in the link above). The catch is that the headlight lasts for 3-6hrs, but once its ran out the computer still carries on functioning for a further 8 hours. Without either of the two lights on under GPS tracking mode, that's when Shanren say you can get 96 hours out of it. So far we've only had a brief test ride, so can't vouch for this yet. 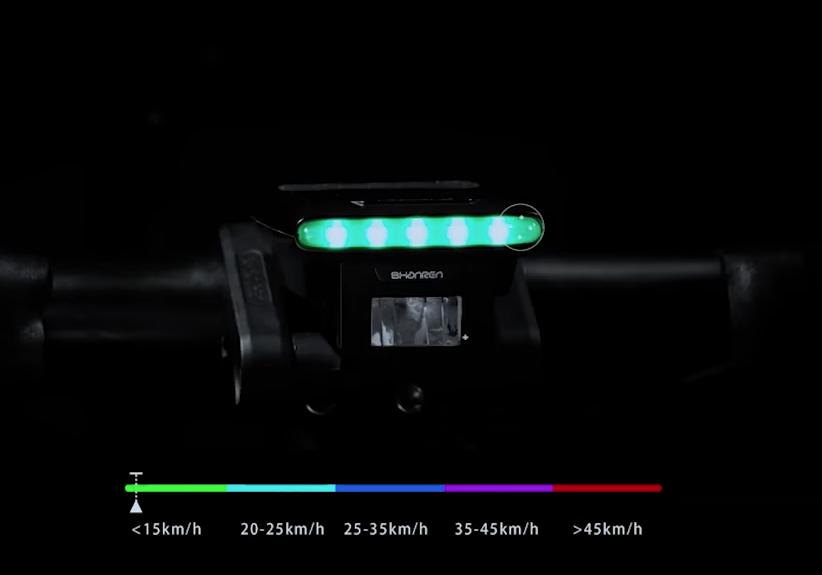 The headlight has a max output of 265 lumens with two brightness settings, that you activate with a long press of the middle button. The additional funky blue light, that turns on by double-tapping, changes colour according to the scale above and flashes red when you exceed 45km/h.

There’s a full Shanren companion app so you can instantly share all your workouts to Strava etc, it’s Bluetooth and ANT+ ready and there’s even a 'virtual power' feature. Shanren claim this gives you a power measurement using a special algorithm without even having to connect a power meter, a little bit like Strava's estimated power. From our initial test ride it doesn't seem to be giving very useful numbers, but Shanren say connecting the speed and cadence sensors will improve the accuracy. 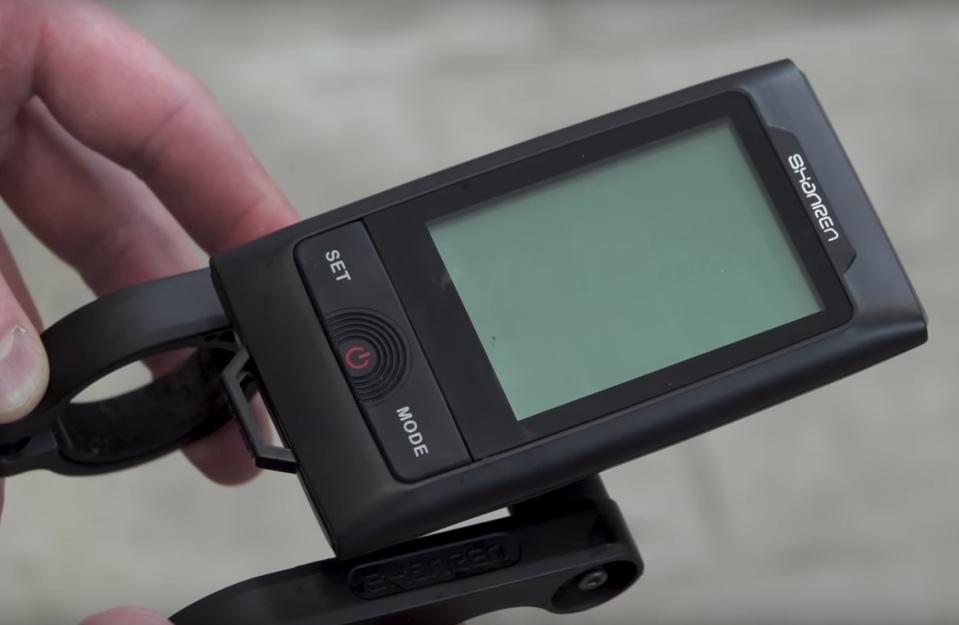 The mount is out-front, but attaches to both sides of your bars. You secure it to your bars both sides and you can also adjust the angle it sits up front, both with a standard hex key. It's a little on the bulky side compared to what we're used to seeing from the big GPS players, and Shanren's claim that it cleans up your front end is I guess true if you consider that you needn't mount an additional light unless you're off-roading at night. 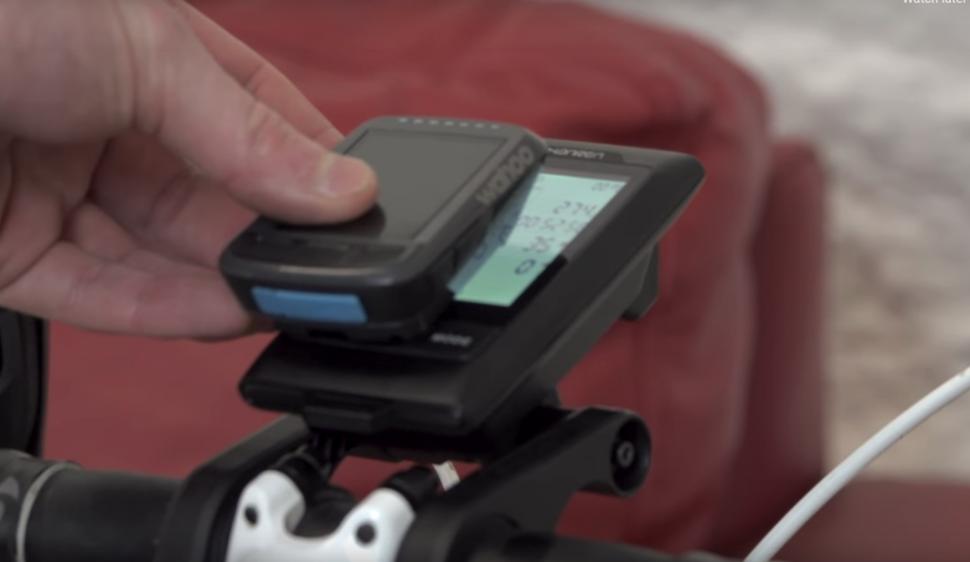 The unit is also pretty large, and although it's a bit of an unfair comparison here it is sized to a Wahoo Elemnt Bolt - the Discovery Pro is more similar in size to a Garmin 1030.

The screen itself displays lots of metrics, and unlike many other computers the order or information you see can't be customised - Shanren say this is because of limitations with the materials used to make the computer. You can scroll through the speed metrics in the top left corner by pressing the button on the right, switching between average, current and top speed. I do usually like my current and average on screen at once, so found this a little disappointing.
The power number displays underneath the grid at the bottom of the screen, whether that's the estimated power or the number being fed in by your power meter.

The Discovery Pro picks up GPS only, and won't pick up Russia's GLONASS satellite system like many other GPS computers nowadays. Shanren say connecting the speed sensor will decrease the chances of experiencing dropouts in areas of poor signal, something I experienced a couple of times on my regular commuting route.

Mapping and turn-by-turn navigation is expected to arrive with a mid-April firmware update, so it wasn't available to try out on my test unit. 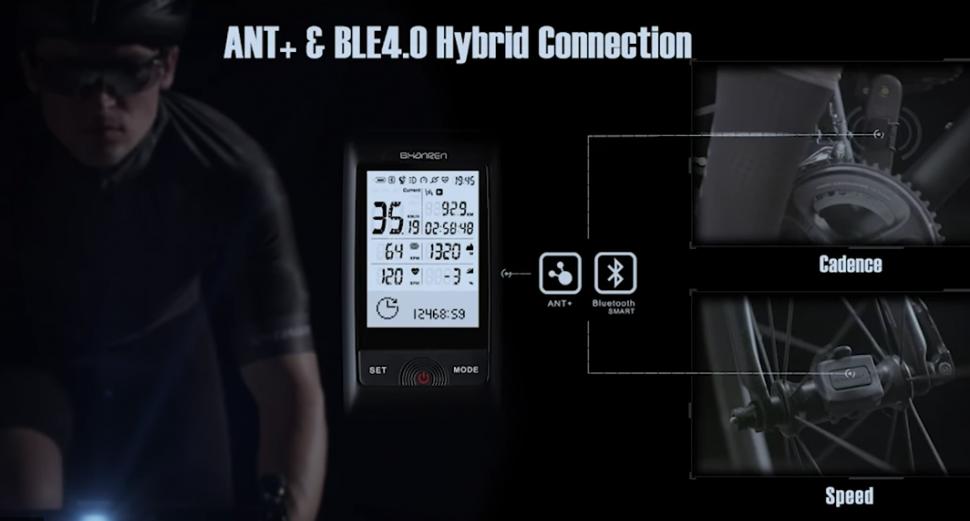 Although Shanren say the Discovery Pro is in full production and the unit I have in my hand is the finished product, it's not quite available to buy on their website yet so we're holding off on a full review for now. Their Indiegogo campaign was very successful, raising over £30,000 in pre-orders and other backing amounts which is way above Shanren's initial target. It all sounds like it’s pretty much a production product but as per road.cc’s reviewing policy, we’re not going to be giving you a full test report just yet just in case there are any issues in delivering those crowdfunded units.
As a backer of a very successful Kickstarter product in the past that had huge problems delivering the finished product due to cashflow problems etc, personally I want to make one million percent sure the Discovery Pro is ready to buy and will ship to your door at the point of purchase, with a confirmed recommended retail price before we give you our verdict.

Units are set to ship out to backers in April 2019, and you can still pick up an earlybird bundle for $179 (about £135) which includes the unit, mount, cadence/speed sensors and heart rate monitor. The Indiegogo campaign is here and check out Shanren's website here.

1
Win! Over £500 of dhb Flashlight winter gear
2
Sir Keir Starmer interviewed by police after crash with cyclist while driving in north west London
3
Are these 30g pedals the lightest ever made? AeroLite Alpha TT-Ceramic pedals are for the weightweenies
4
Egan Bernal facing months of rehabilitation due to spinal condition
5
Fleet Street fury over campaigners' calls to clarify ‘two abreast’ cycling rule
6
Minivan passenger in Las Vegas killed as he pushed cyclist to her death
7
Tao Geoghegan Hart wins the Giro d'Italia
8
Woman arrested on suspicion of manslaughter after female cyclist killed