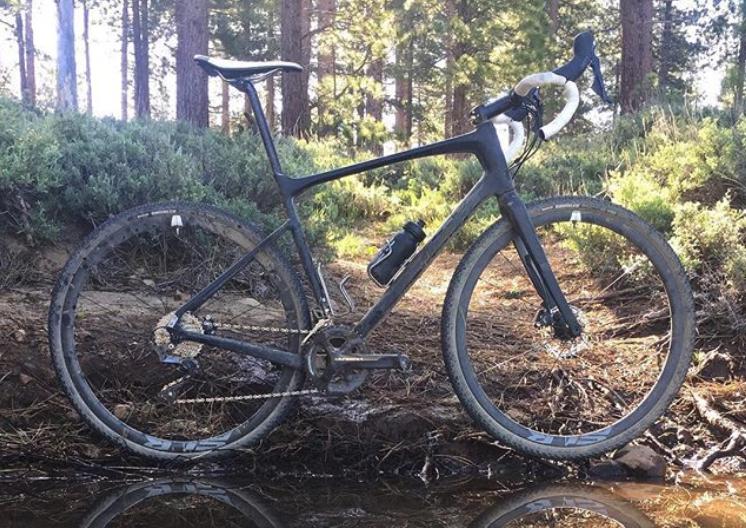 The charge of new gravel and adventure bikes has mostly been led by small brands, but the big guns have their sights set on this increasingly competitive category, and this week Giant Bicycles revealed it is developing a carbon fibre gravel bike.

Via a news post on its website, Giant shared a photo of a prototype gravel bike that was ridden by team rider Carl Decker in the 100-mile Lost and Found Gravel Grinder event in northern California last weekend. The twice winner of this event finished third aboard his new bike.

- Gravel and adventure bikes. Everything you need to know in one place

“This was my first race on this new purpose-built gravel bike, and it was a more than willing partner,” said Decker. “My body was cramping more than I’ve ever experienced and in ways I’d never thought possible, but my back and hands were in better shape than I expected after this brutal day of racing. I’m sure that’s due in large part to the smooth ride quality of the new bike.”

The Lost and Found Gravel Grinder is brutal 100-mile test of man and machine. Carl Decker (@deckerator) and his prototype Giant gravel bike were up to the challenge, scoring a podium finish in the remote woods of Northern California! #gravelcrusher #RideLife #RideGiant

There are no details on the new bike. Bike brands are usually quite coy about new products, not shy about getting them underneath sponsored athletes for pre-launch testing, but they don’t usually share them in this way.

From the photo, we can tell it’s obviously a carbon fibre frame and fork, with a design that doesn’t look all that dissimilar to the Defy - a bike that must be due an update soon? There’s the similar top tube/seat tube junction, dropped seatstays and internal cable routing.

The new bike has a lower driveside chainstay, not quite as radically dropped as the Open Up or Trek Checkpoint though, to increase tyre and chainset clearance.

The pictured bike has Shimano drivetrain with what appears to be an Ultegra CX double chainset - another brand like Trek that has stuck with the front mech and not gone fully down the 1x path.

It's 6:25 am in NorCal. Practice is over, and the coffee is brewing. In a couple hours I'll race 100 gravelly miles with 999 other hearty cyclists. I've been here. And I've done this before. But today, I'll try it on a bike that's not designed to be ridden for 1 hour at a time. And a bike designed to be ridden rather than carried. Seems like a great idea. Now let's make some oatmeal. #raceday #lostandfoundbikeride #campvibes #gravelcrusher

The frame doesn’t appear to be adorned with all the extra mounts we’ve seen on the recently launched Trek Checkpoint so maybe the focus has been on gravel racing rather than all-round versatility?

The front-end looks high, with a tall head tube, and Decker has gone even further, rotating that handlebars up to put the hoods in an unusual position.

What do you think of it?