Most of the attention might be have been on the shiny new bikes on display at the annual Eurobike show in Germany last week, but for me, the most exciting developments are to be found in the one hall that houses the world’s best clothing brands. There have been some incredible developments in fabric technology over the past few years and it’s these that I feel have contributed far more to the ability to actually enjoy cycling in adverse conditions, with many more options for dealing with the often changeable and unpredictable conditions making it tricky to dress for whilst avoiding overheating.

Sportful R&D Strato might just be the perfect autumn top

With its R&D range, Sportful is on a quest to find the perfect clothing to tackle the varied conditions that cyclists in this part of the world have to contend with. Its latest idea is the Strato (Italian for layers) top and is essentially a long sleeve thermal jersey with an integrated windproof gilet with a couple of zipped vents. 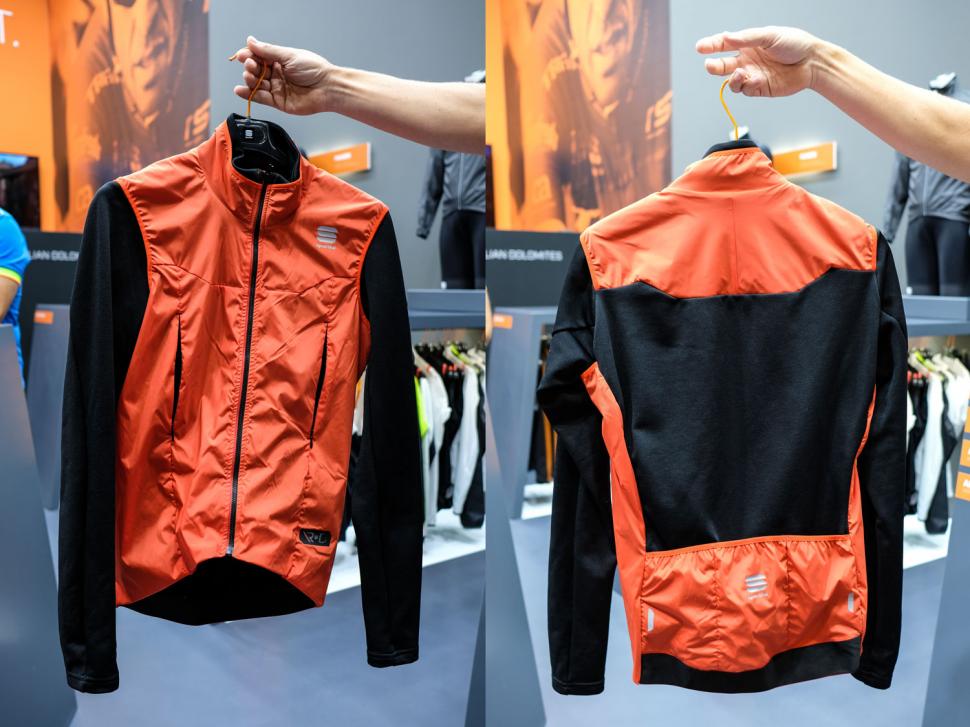 The interesting thing about the wind block fabric is that it’s not 100% windproof, a small amount of air can penetrate it to allow breathability for the milder winters that are common and the fast-paced rides that are popular with many cyclists these days, whilst keeping the thermal fabric dry and protecting the cyclist from the cold chill. The back panel is intended to allow better moisture evaporation compared to a conventional gilet and jersey combination.

The gilet is only attached in a few places, to allow freedom of movement for comfort but also to ensure the thermal fabric remains dry at all times, and to aid the removal of excess moisture. It’s an interesting concept and we can’t think of anything else like it on the market. Layering for the autumn and winter conditions can be extremely difficult in the UK as there’s so much variation, but this looks like a top that takes away the agony of making a decision. Of course, Gabba-style tops have become very popular in the UK at this time of year for that very reason, many cyclists still favour the classic versatility of a thermal long sleeve with a wind-blocking gilet. It'll be interesting to put it through its paces and see how it performs. 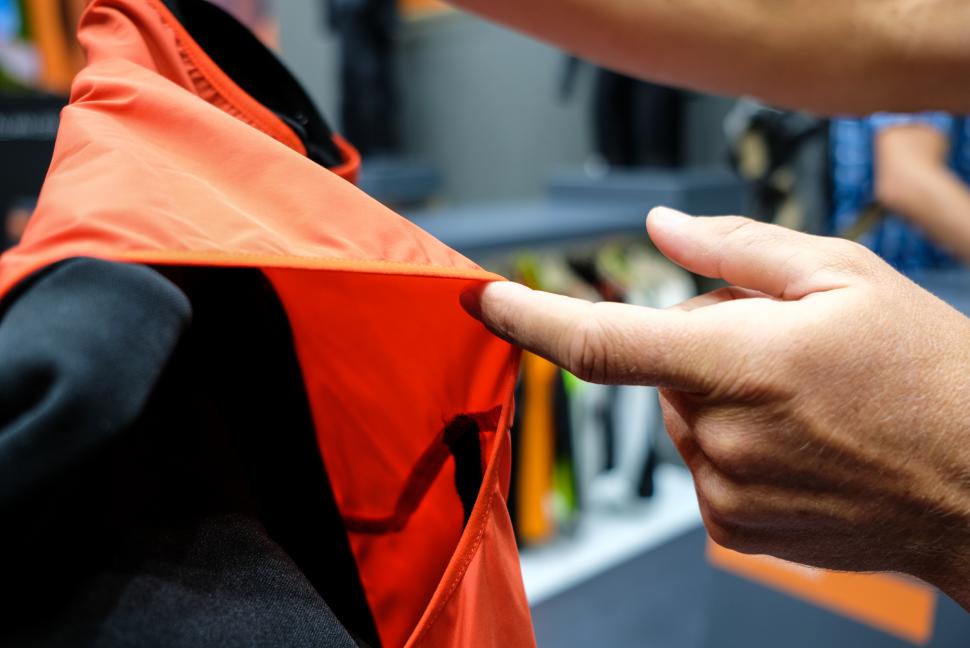 It’s got some useful features. There are two vertical zipped vents on the front to provide extra airflow on warmer days. Three rear pockets provide extra protection for the contents compared to a regular thermal jersey. There’s a wide waist band to keep the jacket in place and stop draughts sneaking up your back, and at the front there’s a soft leading edge to provide a comfortable fit, avoiding the jacked digging in when you’re tucked low over the bars. 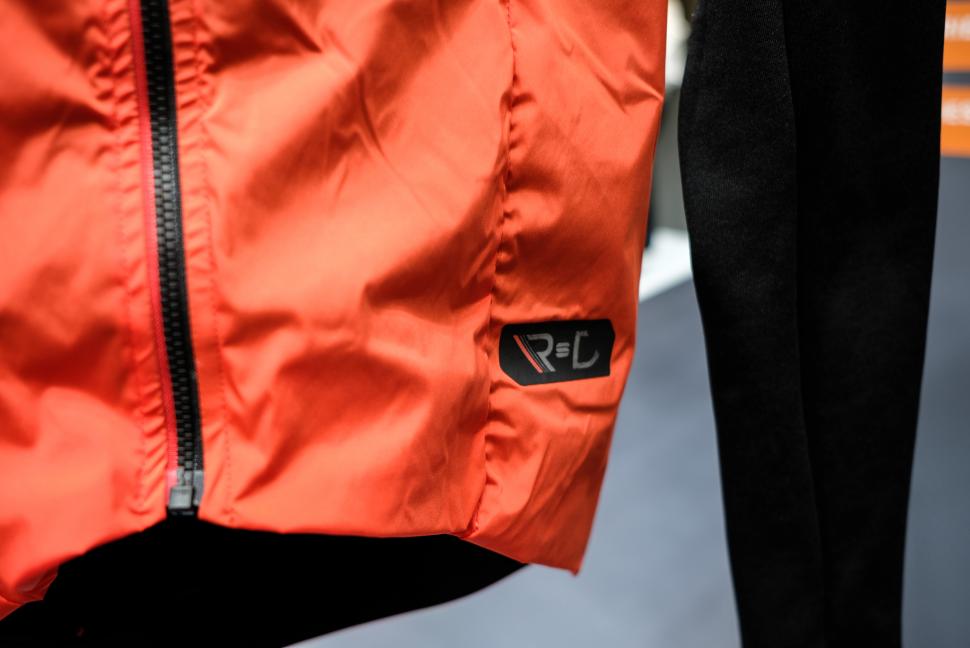 The concept was driven not by the demands of the professional cyclists as has often been the motivation for many other Sportful garments, but the requirements of the UK market and came about after Sportful employees got creative with a pair of scissors and a sewing kit and set out to create a top that could provide the breathability of a regular jersey with the protection of a gilet. I can’t think of anything else like this on the market, and it certainly is interesting to test it. The new Strato is landing in shops in the next couple of weeks, and we hope to get our hands on one to test very soon. It costs £120 and is available in a range of sizes. 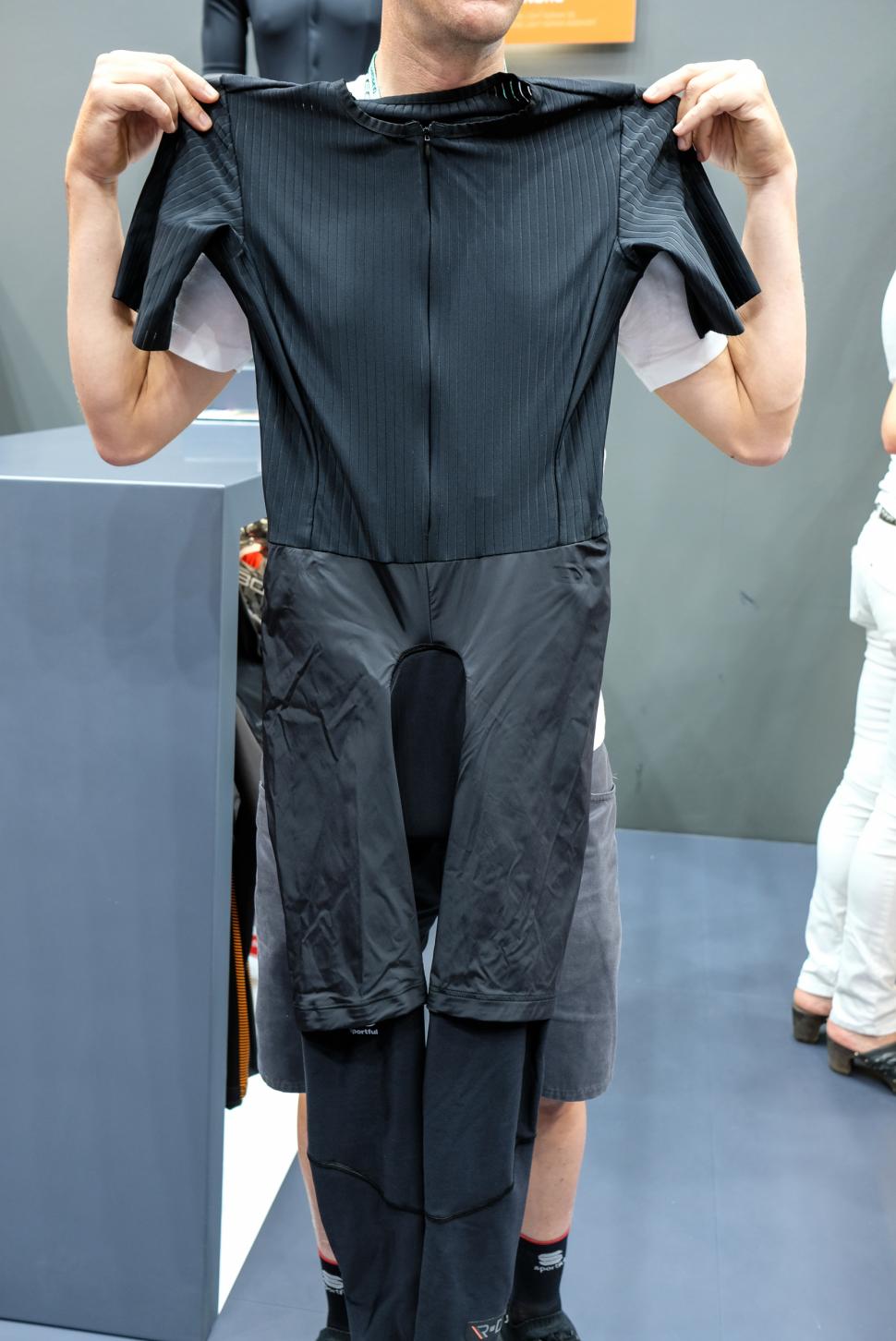 Also new is the Strato bib tight, and it’s another unusual piece of garment design. It’s an integrated bib tight and base layer, an all-in-one winter offering for all conditions, and as with the Strato jacket it has a thermal bib dry fabric for the legs overlaid with a secondary windproof material above the knees covering the thighs. It’s wind permeable so moisture will escape keeping the thermal fabric dry but and it’s detached to prevent restriction of pedalling movement. 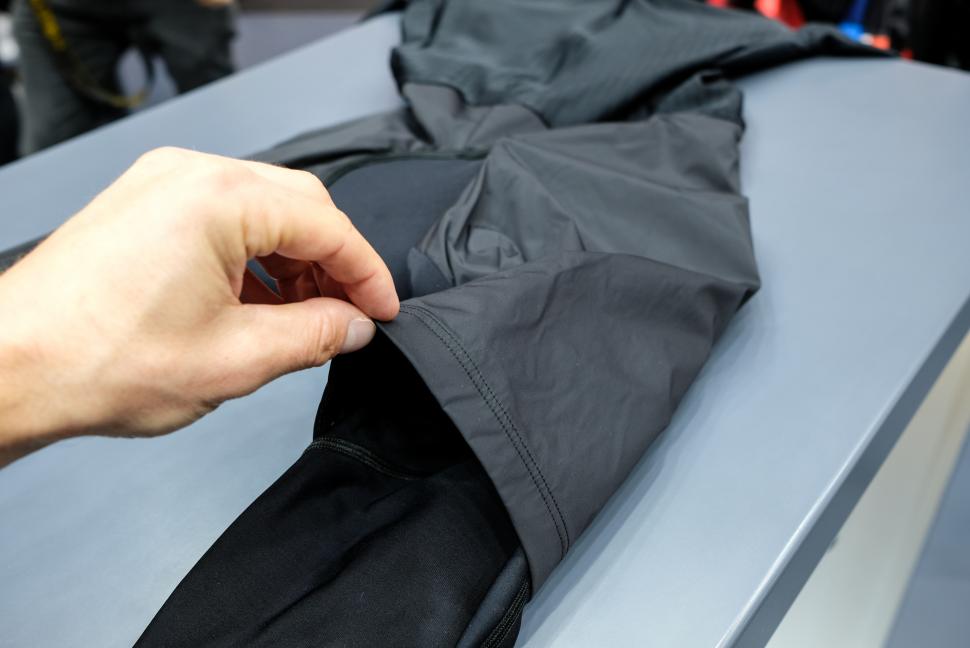 Here you can see the separation of the two fabrics on the top of the legs. An integrated base layer ensures there’s no gap between top and bottoms, with a two-way zipper for access and nature breaks. It’s going to be hitting shops soon and costs £160. 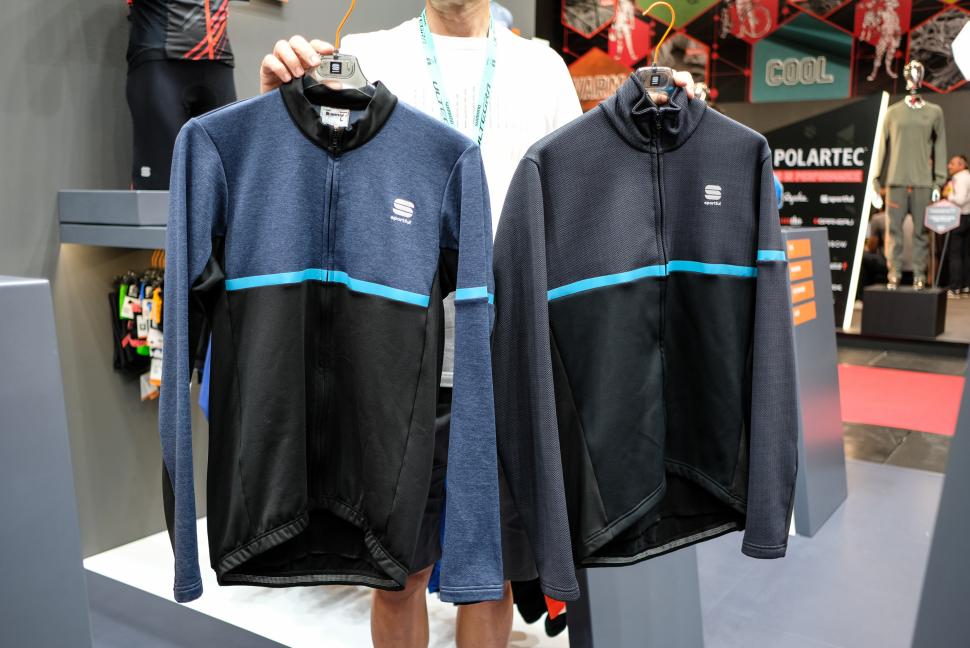 The Giara range, launched earlier this year (we tested it at the launch event in  Italy - read about it here) has gone down well on account of its understated and relaxed styling and colouring. The range has been expanded with a Giara soft shell jacket (£120) and a lighter weight thermal long sleeve jersey (£85) 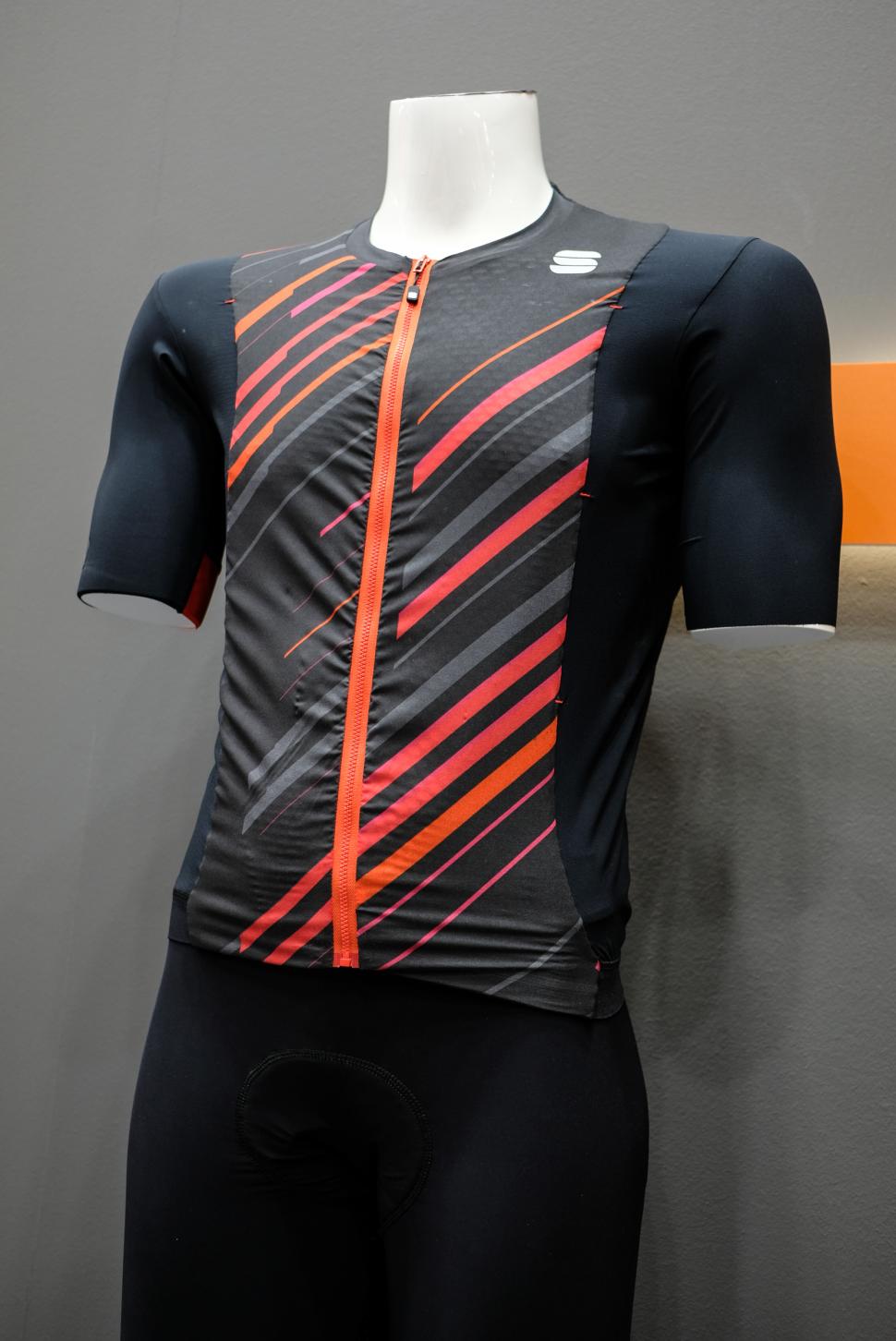 Sportful showed us a new 2018 jersey from its R&D range. It's called the Celsius and has one of the most radical fabric technologies we’ve seen in a while. It’s designed to work in as wide a range of temperatures as possible, so it can deal with changeable conditions, from the chill of the early morning ride through to the heat of the midday sun. 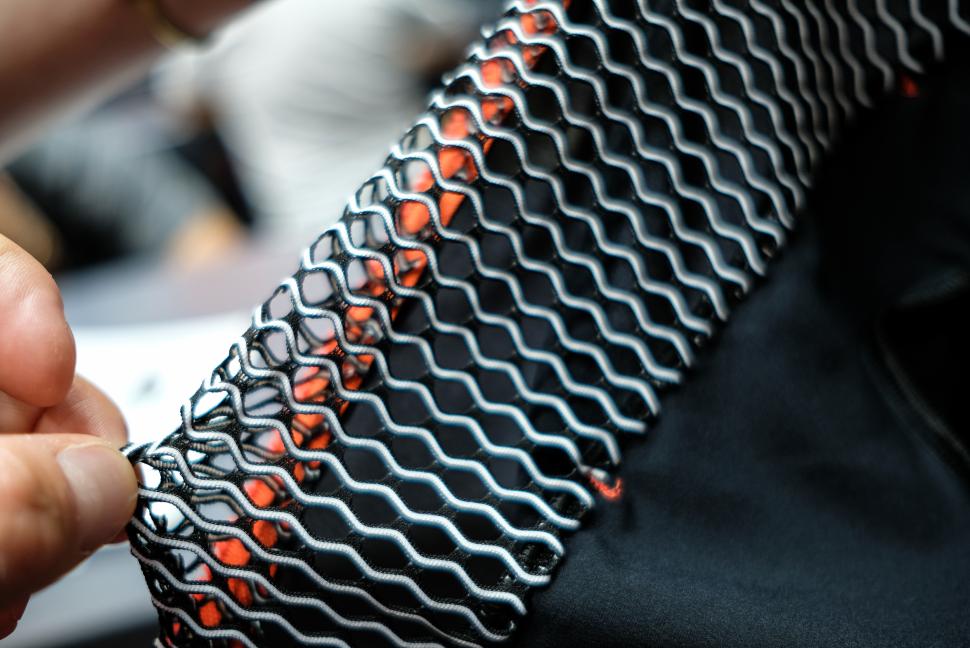 Sportful has developed a 3D structured material that looks like a mesh, and it’s used on the inside of the front-facing panels. It’s intended to pull the outside fabric away from the skin and let moisture escape a little easier while trapping a little layer of warm air between you and the outside.  Despite this groundbreaking technology Sportful reckons it’ll cost £110 when it’s available next spring. Something to look forward to next year then.

The Gore Shakedry is the best waterproof jacket I’ve yet tested, but a few readers voiced their concern about the colour, a result of the manufacturing process, but Gore has now found a way of adding colour and expands the range with the tasteful colours you can see in the photo below, or the video above. 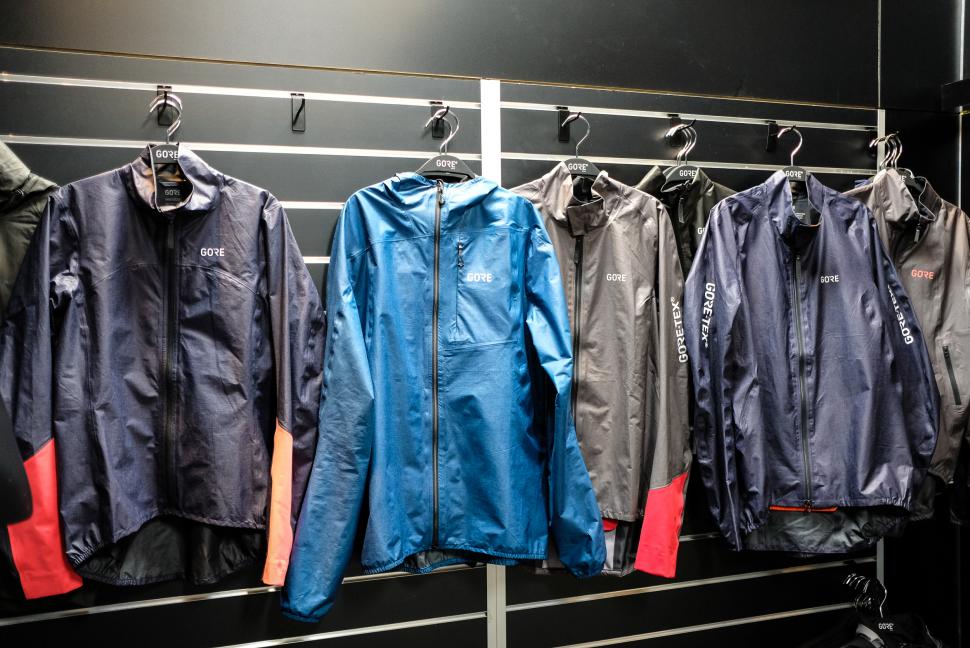 Gore has also worked to boost visibility by adding coloured panels of Active fabric in strategic places. The seams are all taped but the Active fabric adds a bit of weight but it’s still an incredibly light jacket. There’s also now an option of a rear zipped pocket, with a coloured panel in a choice of red or yellow, and extra reflective material in key places. 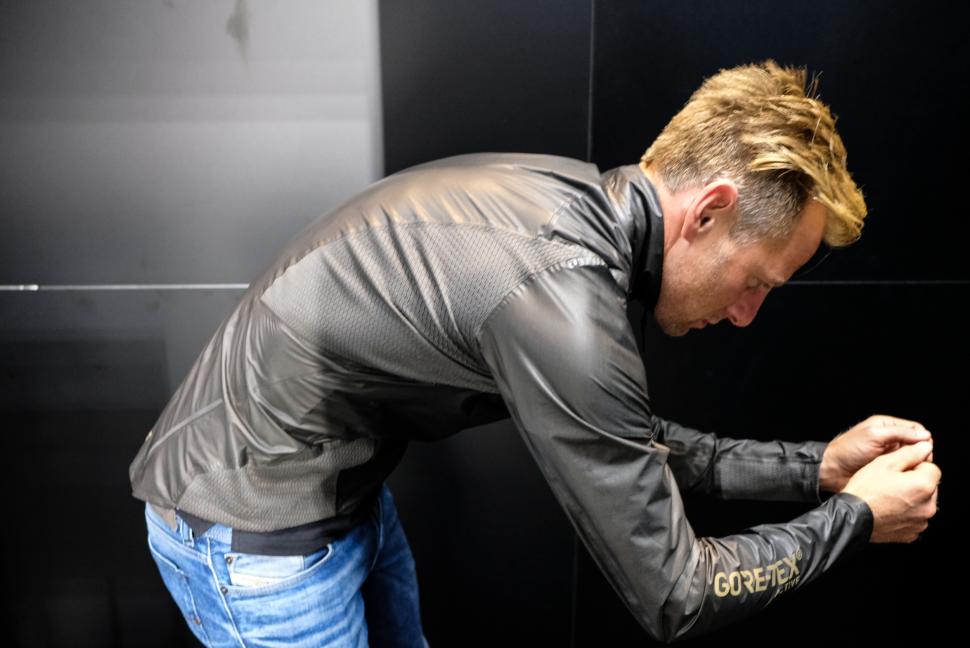 Intended to improve the fit and flexibility of the Shakedry jackets, Gore has developed a brand new fabric called Stretch. It has all the same waterproof and breathability properties as Shakedry but has a high degree of stretch. 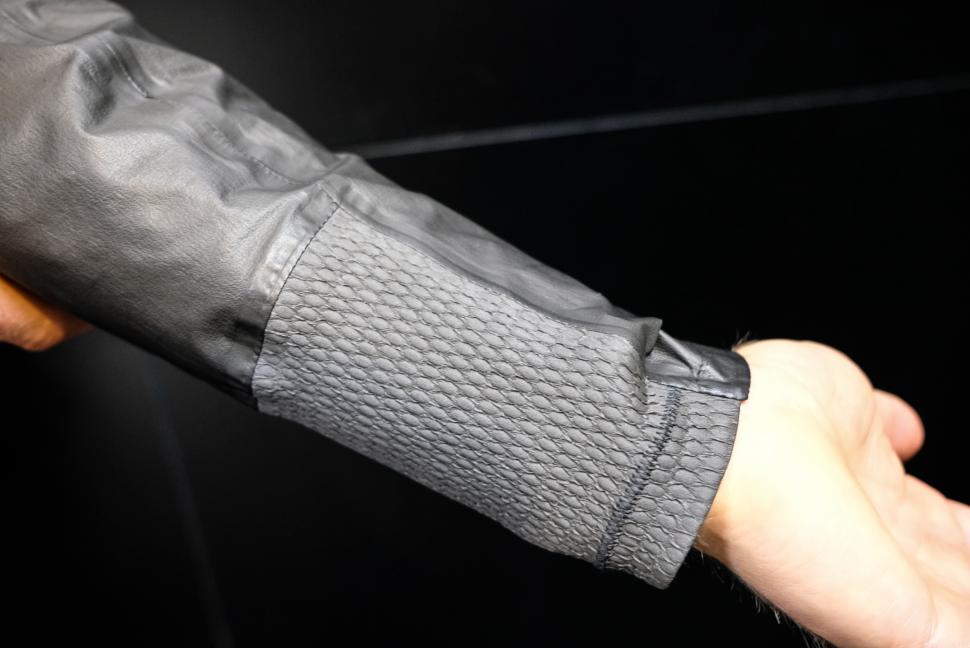 Used in key places, as demonstrated on this concept jacket by Gore’s Ben, the Stretch fabric enhances the fit. It’ll be useful on the cuffs for getting the jacket on over gloves, or for accommodating stuffed pockets. It’s a little way off coming into production but should be out next spring. 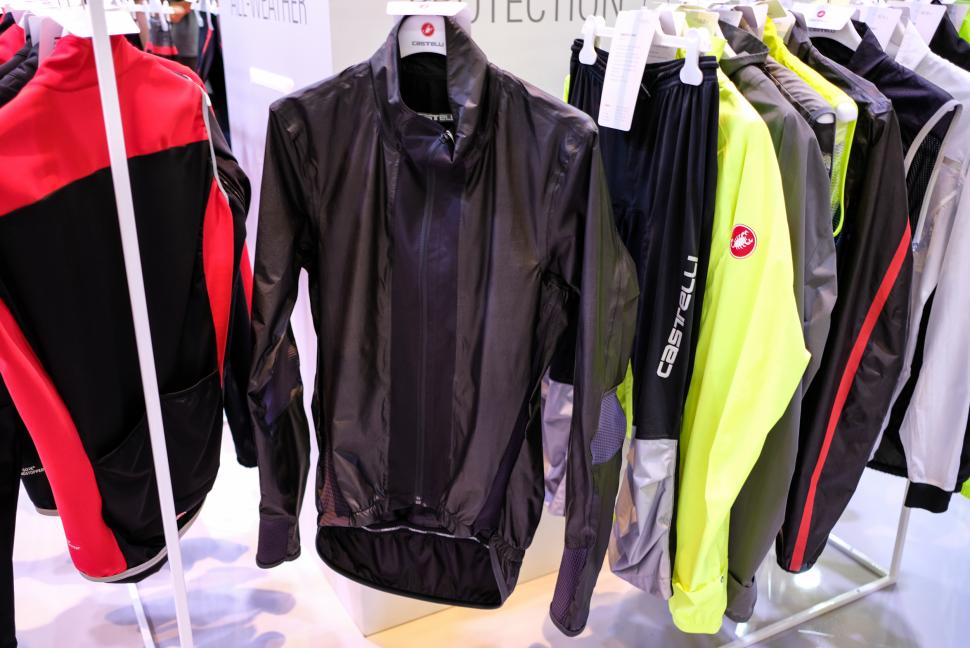 While the Gore Stretch jacket isn’t available yet, Castelli has already made use of it for its brand new Idro Pro Jacket. Only a few clothing brands have made use of Gore’s Shakedry fabric and the Italian company was one of the first. This new version makes use of the new Gore Stretch fabric in key places, and as well as that there's a generous dropped tail and rear pockets, something the original Idro didn't have. 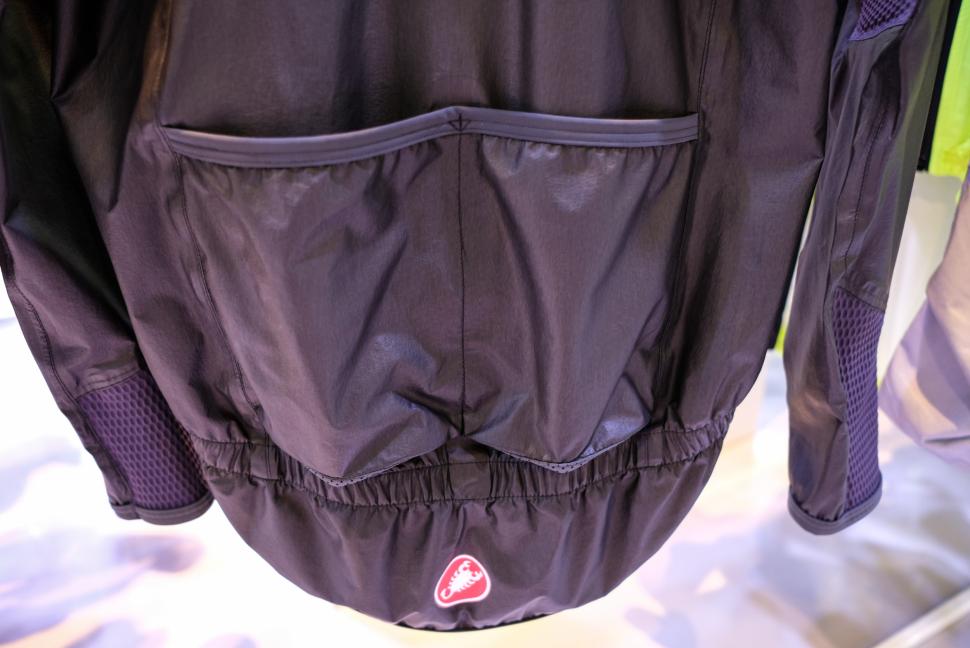 It’s not going to be cheap at €350 however, but that’s the price you pay for cutting-edge technology.

We'll be getting our hands on some of these new products to test soon so stay tuned for full reviews soon, and with autumn arriving it's a good time to start thinking about what you're going to wear over the next few months.