Today Colnago has launched its new V2-r aero race bike, an update of the V1-r first launched back in 2014.

We’re not at the launch in Italy, but by the power of the internet a press release has been sent our way, so we’re just missing out on the free flowing Prosecco but not all the travelling that accompanies a bike launch… 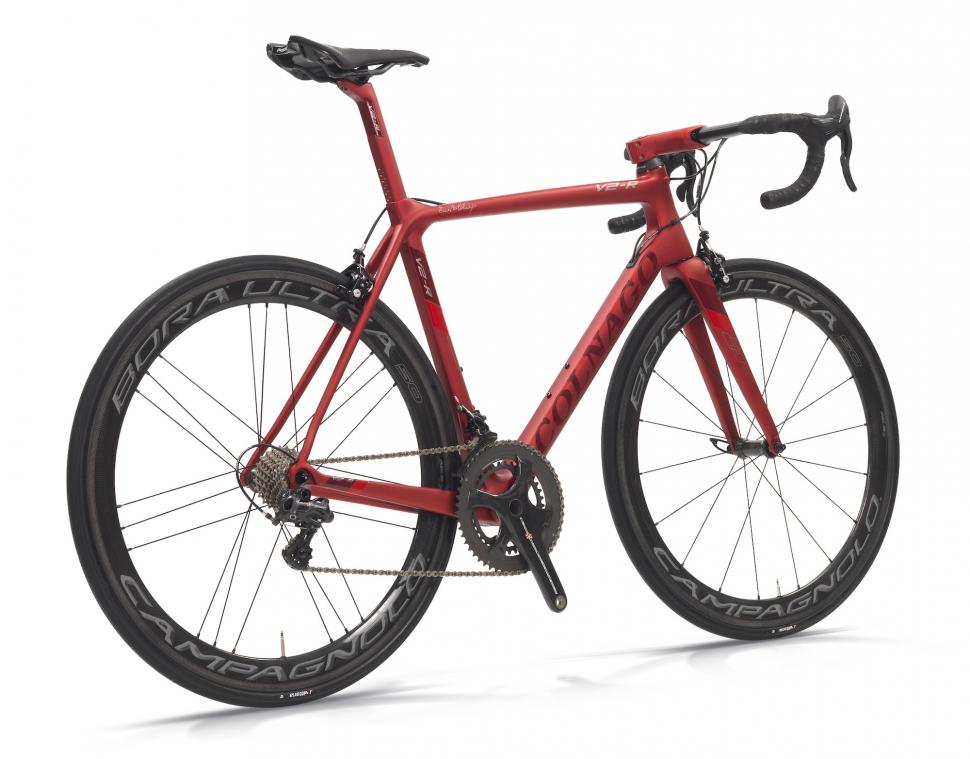 The V1-r bike signified the Italian company’s first foray into the world of aerodynamics, the hottest buzzword in road cycling right now (if you discount adventure and gravel) but the launch of the Concept, a fully fledged aero bike unveiled last summer, was a clear sign that the V2-r was in need of an update to ensure it still earned a place in the company’s bike range.

To be clear, the V1-r was a bike we found to offer good performance, with plenty of speed and responsive handling, but we had issues with the direct mount brakes, but it had a tough time tempting anyone looking for an aero bike to not be distracted by a more aerodynamically superior aero road bike. Think of it as a semi-aero road bike.

The new V2-r retains much of the original version, even the frame weight is the same at 835g. Didn’t Colnago get the memo about new bikes having to be lighter? Crazy! While they’ve not reduced the weight, they have upped the stiffness, so the stiffness-to-weight ratio has been improved. The bottom bracket stiffness is up 13% and the head tube stiffness increases by 4%, which should provide sharpen up the handling and reactions of the bike. A change we’re seeing a lot on the latest top-end road bikes is the move from an external to internal seatclamp, which does give the frame a cleaner appearance on what is already a very good looking bike. It’s still using the same 27.2mm diameter post with a truncated shape that mirrors the shape of the seat tube as on the old bike.

Colnago has also redesigned the top tube and head tube junction and revised the cable routing, the cables now entering a central port on the top of the down tube. That’s an idea borrowed from the Concept. And we're seeing it on quite a few new bikes at the moment, so it appears to be something of a trend. Another big change is the change of location for the rear brake, moving from the chainstay to the seatstay. That’s a good move in our books, as the cable routing on the old bike hampered the rear brake performance, and any aero efficiency difference is offset by improved braking and ease of maintenance. As before the V2-r uses direct mount brakes with tyre clearance for up to 28mm tyres. So there you go, the new Colnago V2-r, stiffer than the old model but no lighter, and with a more sensible rear brake placement and integrated seatclamp and cleaner cable routing. The V2-r remains an interesting proposition if it's perhaps a tricky choice to make compared to Colnago's other offerings. If you want a full aero bike the Concept is a natural choice, it’s the company’s first fully dedicated aero model. If it’s all-round performance and classic styling you crave, the C60 is the bike for you. So the V2-r fits in the range as a lightweight all-round and climbing bike with some aero benefits. It’s going to be available as a frameset costing £2,899.99 in a choice of three colours, with availability scheduled for July. A complete bike will cost £8,999.95 with Campagnolo Super Record and Bora Ultra wheels.