Is this the perfect bike for a 200km gravel event?
by David Arthur @davearthur

Team road.cc is off to ride/survive the Dirty Reiver 200km gravel race tomorrow, and here’s a  detailed look at the bike I’ve prepared for the ride, an Open UP with a Lauf Grit fork, SRAM Rival 1x11 groupset, Praxis carbon wheels and new Hutchinson Overide gravel tyres.

What’s the ideal bike for the Dirty Reiver? I’m in a pretty fortunate position to be able to choose from a wide range of bikes, but I’ve plucked the Open UP, a carbon fibre frameset built specifically for gravel riding, to ride this year. It would seem to be the ideal choice: light and stiff carbon frame, geometry tuned for gravel riding, disc brakes, thru-axles and clearance for wide tyres. Open doesn't sell complete bikes, only framesets, but this has been perfect as it has given me the opportunity to build what I reckon is the perfect setup for tackling a 200km gravel event. Of course, the perfect setup will vary depending on personal preference and the details of the course, but having ridden the Dirty Reiver last year on a similar bike, the Parlee Chebacco, I reckon this bike builds on what worked last year with some, hopeful, improvements.

First Look: Open UP assembled and ready to ride 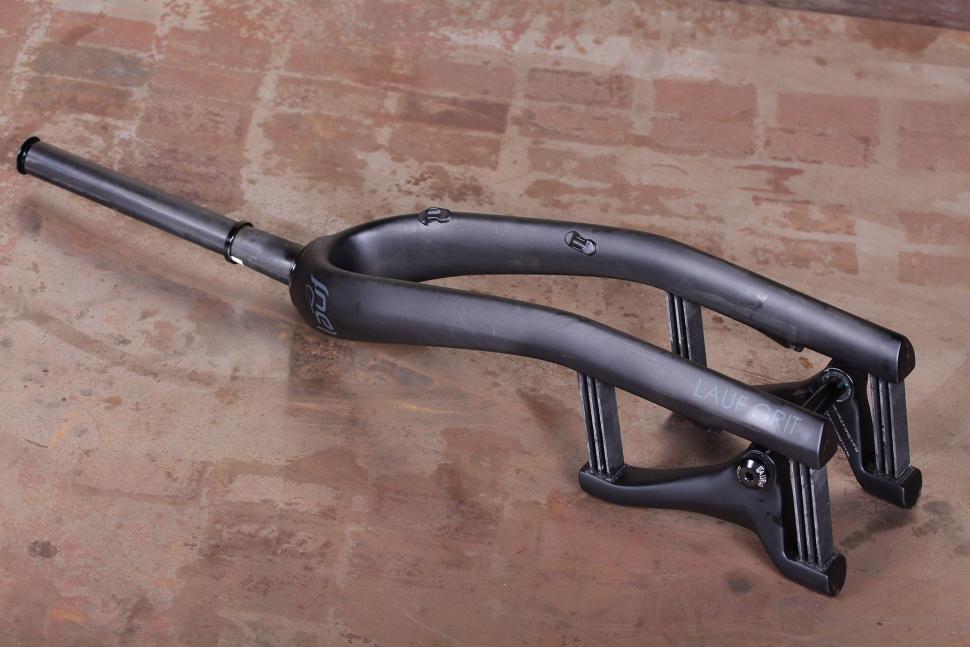 After a few weeks riding the Open UP and getting used to it and being very impressed with it I should add, a Lauf Grit fork arrived on my doorstep. Intrigued, I bolted it to the frame and have been riding it for the last few weeks.  Yes it adds weight and the looks are, well, funky at best, but the glass fibre leaf springs suspended between the two halves of the carbon fork provide 30mm of suspension. That should hopefully save my arms from turning to mush like they did last year after six hours of gravel smashing. 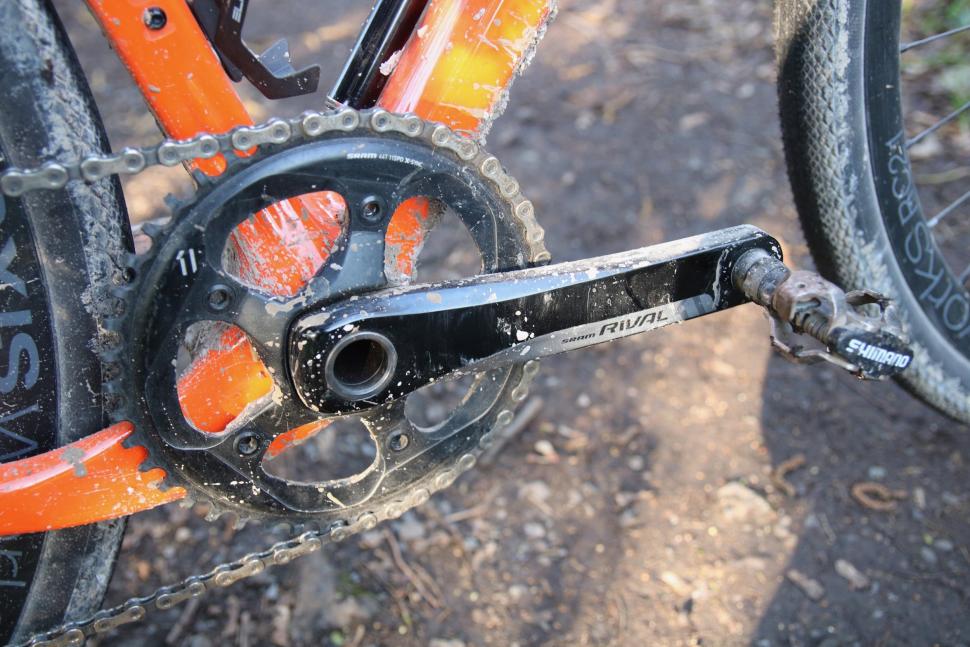 The gearing and braking decision was an easy one. SRAM’s 1x1 groupset seemed a pretty obvious choice from the outset and nothing to do with having it left over from when I built up the Bowman Pilgrims a few years ago.  Shimano’s Di2 was nice to have last year but the compact chainset wasn’t really necessary, I rarely used the big ring apart from to keep the chain on during the few high-speed descents. So an 11-36t mountain bike cassette with a 42t single chainring should provide the ideal low to mid-range gearing options I’ll need to tame the course. Or grovel up the climbs. The clutch-style mech will keep the drivetrain quiet and prevent the chain coming off on the rockier sections, and the hydraulic disc brakes with 160mm rotors take care of slowing me down. Tyre choice has been one of the most interesting topics of conversation in the lead up to this event. I’ve been testing the new Hutchinson Overide 38mm tyre and I’ve been impressed, and as the weather conditions are for a dry course the fast-rolling tread pattern should provide good speed. If it rains I'm probably buggered, but I've got my fingers crossed. They're tubeless - I punctured last year and changing a flat with frozen hands wasn't much fun, so tubeless is a definite for this event. Tyre pressure is another interesting detail, and based on some testing over Salisbury Plain I found about 40psi to be a good compromise, enough give to smooth the rough but enough air to prevent puncturing or feeling too draggy.

I’ve been through several sets of test wheels during the time I’ve been riding the Open. I’ve settled on the new Praxis RC21, a new carbon fibre wheelset from the company best known for its chainsets. The wheels impressed on the Salisbury Plain test ride recently with a low weight (1450g) and good stiffness providing good speed on the climbs and nice handling, without being overly harsh in the rough. They've been easy to setup tubeless and the DT Swiss internals should mean good reliability. 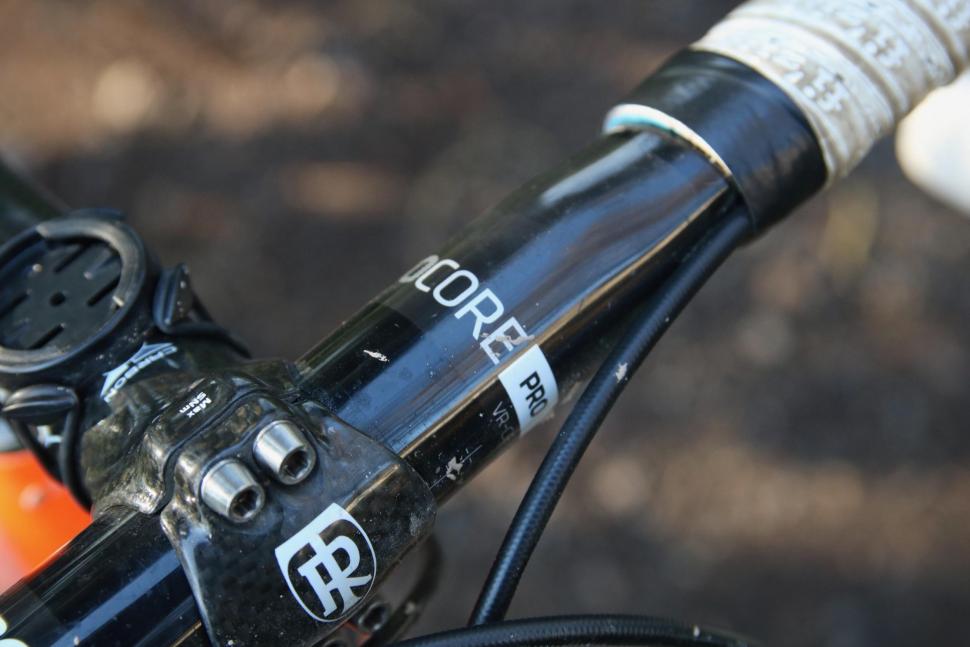 I’m using the Bontrager IsoCore carbon fibre handlebar that I tested a while ago. It combines an elastomer material in the carbon layup to provide extra vibration damping. It does make a small difference and helps take the sting out of the front end, so I’m happy with that choice. Because of the handlebar and the Lauf fork, I've gone with a single wrap of Fizik bar tape, as I prefer a thin feel to the handlebars rather than the bump-absorbing benefits of a double wrap.

I’ve just swapped to a carbon Enve layback seatpost as I needed a bit more stretch than the previous inline Reilly post I was testing. I’ve also changed the Fizik Arione saddle I started with to a Fabric Scoop saddle because there’s a bit more forgiveness in the shell of the saddle, which should help dissipate impacts more. I also prefer the scooped shape for longer rides. The biggest change regards my luggage solution. Last year I used a saddle pack stuffed with all my ride essentials like spare tubes, survival blanket etc, and my pockets stuffed with food. Because I was wearing so many layers of clothing (it was freezing cold all day) I found it tricky to retrieve food on the move. So I’ve decided to use a frame bag and put everything I need for the ride in it. It offers the advantage that everything is in one place, it’s securely fastened to the frame, and there’s additional space should I need to carry extra layers or remove any layers during the ride. As the forecast is looking warmer than last year, it’s not inconceivable that I might want to strip away some layers during the ride.

The frame bag also makes it easier to get at my rations. I’ve been testing it for the past few weeks and it works well, so I’m happy with that choice. Yes, it’s extra weight, but practicality is important on such a long ride, and I’m not riding to win so weight isn't the biggest priority.

Other things of note are an old pair of trusty Lezyne metal bottle cages and a Lezyne pump attached to the frame because it’s better than carrying a pump in a jersey pocket on such a long ride. I’ll also add on some emergency lights. I didn’t need them last year and hopefully, I won’t this year, but anything can happen.

That’s it then. The bike should be up to the task, I just hope my legs and head are as well.