British brand Exposure Lights has taken to Kickstarter to launch it new Capture, a compact LED light designed to be used with action cameras, helping to film in low light conditions.

The company has become synonymous with its high-powered LED lights and cable-free design. It was led to develop a small light for action cameras based on its own experience of filming in low light conditions. The Capture brings together all its expertise into a very compact and light weight LED light that uses the GoPro mounting system.

“The Capture project is fuelled by a need for continued exploration of the night, and the increasing desire to record the adventure which is made ever easier through advancing Action camera technology and innovations such as drones,” says the company. “Over the years we have spent a lot of time filming, most often with inappropriate lighting, trying to ‘capture a product’ or simply ‘acting the hero’. From ocean voyages to skate parks, they all require a lightweight, tough, waterproof light to match and support the functionality of your film setup.

“Think of your action camera and all of the places you dream of using it but poor light makes the results unusable.”

The Capture has been 18 months in development, and it has turned to Graphene, the latest wonder material that has many potential applications in the cycling world - most notably so far with Vittoria’s new tyre range. One of the challenges in producing the Capture was ensuring effective heat dissipation to ensure the LED lights run at a low temperature. 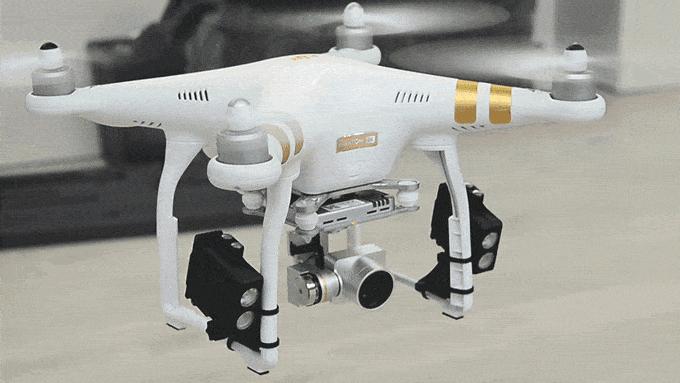 It uses aluminium for its bike lights with cooling fins, but with the Capture it wanted to keep the weight low as well as ensuring effective thermal transfer. This led the company to work with graphene, and developing a graphene-reinforced polymer material that provides “ the optimum compound ratios for thermal conductivity and strength allowing the heat to be quickly drawn away from the LED’s for maximised efficiency and optimised battery power use.”

There will be a choice of 600, 400, 200 and 75-lumen outputs providing 35, 60, 120 and 340 minute run times respectively. The two LEDs in the Capture provide both a spot and wide beam, and you can vary the lumen output to each LED depending on the situation.

It’s powered by a regular GoPro Hero4 battery. A small OLED screen on the back of the unit provides the remaining battery as a percentage and the lumen output mode, with two buttons to navigate through the different options. It’s waterproof to 40m. 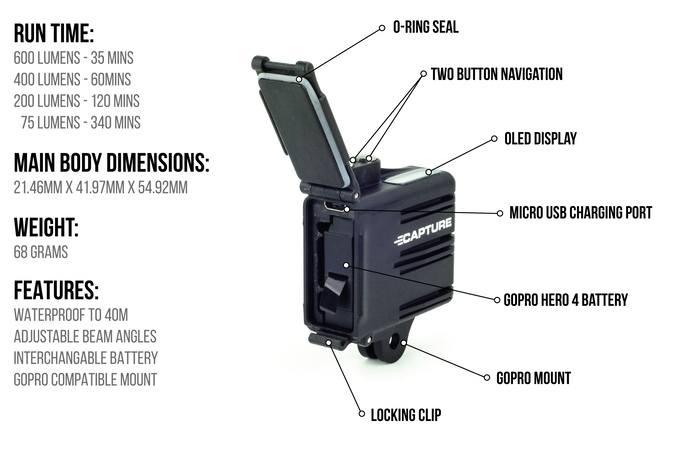 The Capture is compatible with a wide range of mounts and cameras, it can be fixed to a drone or smartphone, positioned next to a GoPro on the handlebars, or used separately on top of the helmet. It can also be fixed to a conventional SLR hot shoe mount or tripod. You can also pair up two lights for a 1200 lumen output.

Exposure has taken to Kickstarter to launch its new Capture because it wants to reach audiences outside of its existing cycling base. The company is seeking £30,000 funding and you can currently get an early bird Capture Light Kit for £70 if you’re quick. The light will be available in December 2016.