We headed up to London earlier this week to take a first look at the new range of road, city and adventure bikes from British brand Pinnacle. Conceived by Evans Cycles nearly ten years ago, we’ve reviewed a fair few Pinnacle bikes over the years and they have always impressed with their smart design, likeable all-round ability and keen prices providing a compelling package. The 2017 range looks stronger than ever before, with updates to the Dolomite road bike and Arkose adventure bike, and an all-new fast urban flat-bar bike called the Neon Disc.

The Dolomite is the company’s drop bar road bike and in 2016 it made the wholesale switch to disc brakes, and it looks to have been a successful decision. In fact, the Dolomite 5 was one of the first bikes we reviewed that offered hydraulic disc brakes for a grand, and it’s a good move, this is a bike that is designed to be a fast road bike but with year-round dependability. So as well as disc brakes, there are mudguard mounts and clearance for wide tyres (ignore the down tube Crud Catcher bolts, they won’t appear on production bikes). 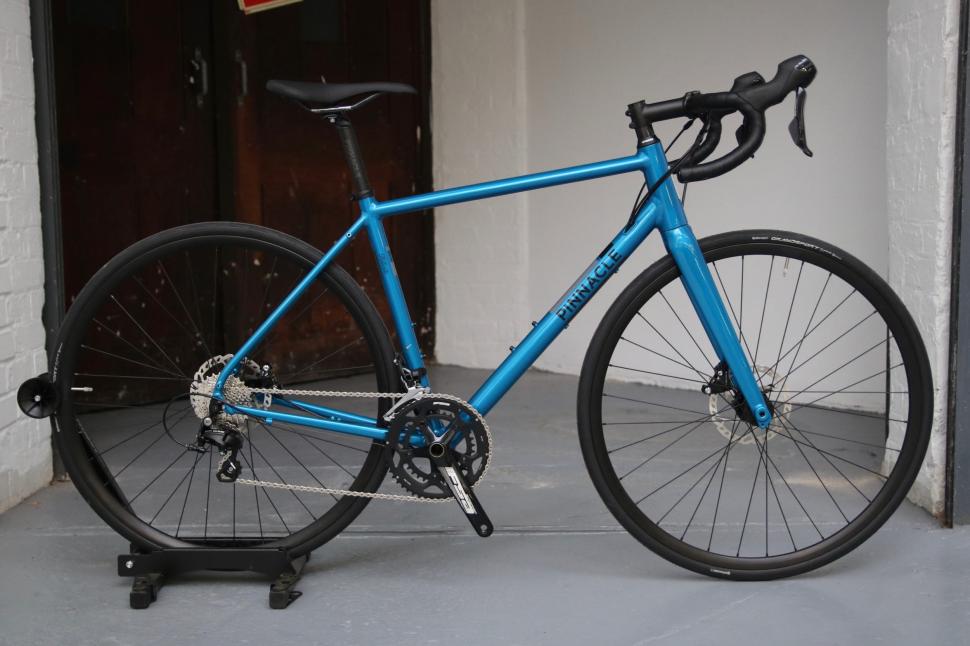 Here’s how Pinnacle describes the bike: “The Pinnacle Dolomite is a road bike that offers you the freedom of the road - by that we mean the freedom to ride in all weathers with guards fitted and uncompromised brakes, the freedom to ride your daily commuting bike in a fast bunch at the weekend without feeling compromised, or the freedom to ride further in comfort on bigger tyres. We’ve taken the basics of the race bikes we love and simply added some range – tyre clearance and some eyelets won’t slow you down and we’ve worked hard on that fine line balance between having that range and maintaining a traditional road bike feel.” 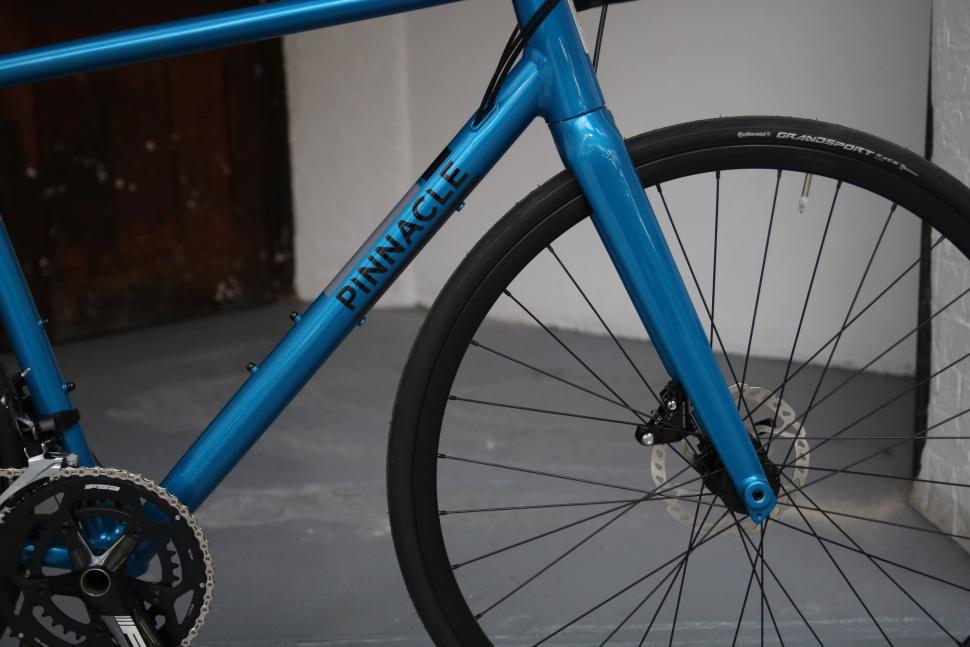 The main story for 2017 is the adoption of Shimano’s Flat Mount disc brake standard, which produces a slightly cleaner looking bike, and thru-axle on the new carbon fibre fork. It’s kept the previous quick release rear axle as it felt there was no real benefit to switching to a thru-axle, and it also impacts the pricing as well. It’s an all-new fork that it has had developed to suit the requirements of the bike. It’s a 378mm axle-to-crown fork with a 40mm offset, and there’s space for up to 35mm tyres. While the majority of the Dolomite models come with disc brakes, the entry-level £500 Dolomite 1 is equipped with conventional rim brakes. The £650 Dolomite 2 is the first step on the disc-equipped Dolomite range and uses Tektro Mira mechanical discs with a Shimano Claris groupset. The range continues through another three price points, and women’s versions of each, right up to the £1,400 Dolomite 6. 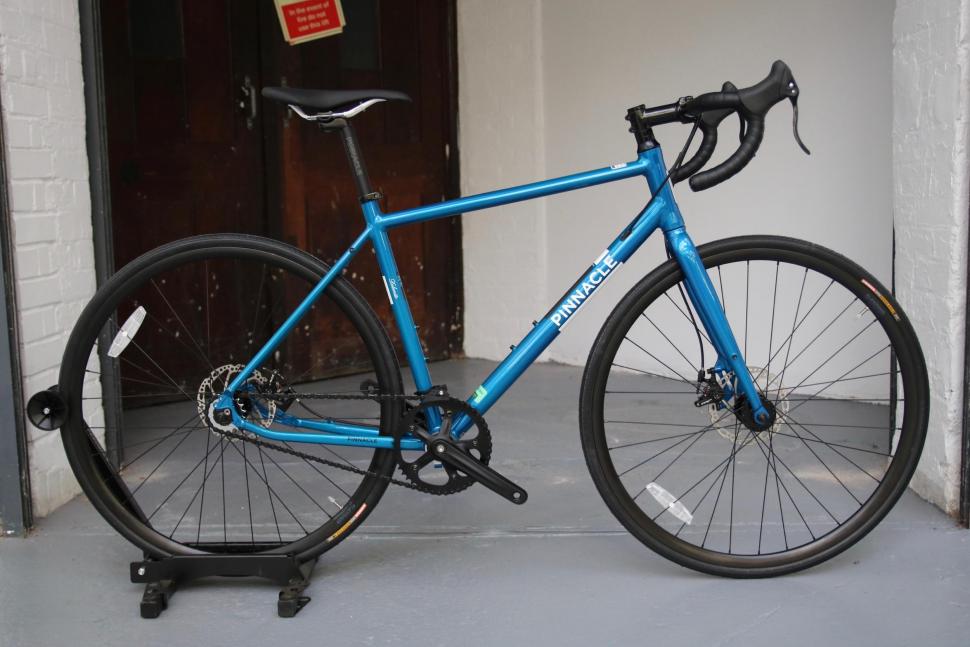 Are singlespeed bikes still popular? It’s a good question, they certainly are not anywhere near as popular as the big boom back in about 2009 when you couldn’t move for them. Apparently, Pinnacle has seen quite a bit of demand for a singlespeed model, so it has developed a singlespeed version of the Dolomite. It’s keenly priced at £525 with an aluminium frame, disc brakes, an EBB bottom bracket that allows easy chain tensioning, TRP Spyre mechanical disc brakes and space for 32mm tyres without mudguards, and 28mm with ‘guards. The geometry has been modified and sits somewhere between the Dolomite and Arkose, so a bit more relaxed than a road bike.

If you want to tackle more than just smooth roads, then the Arkose is the bike for you. What started out as a bike based loosely on a cyclocross blueprint has slowly morphed into more of a gravel and adventure bike, and the updated model looks to be even more capable of heading off-road than ever before. 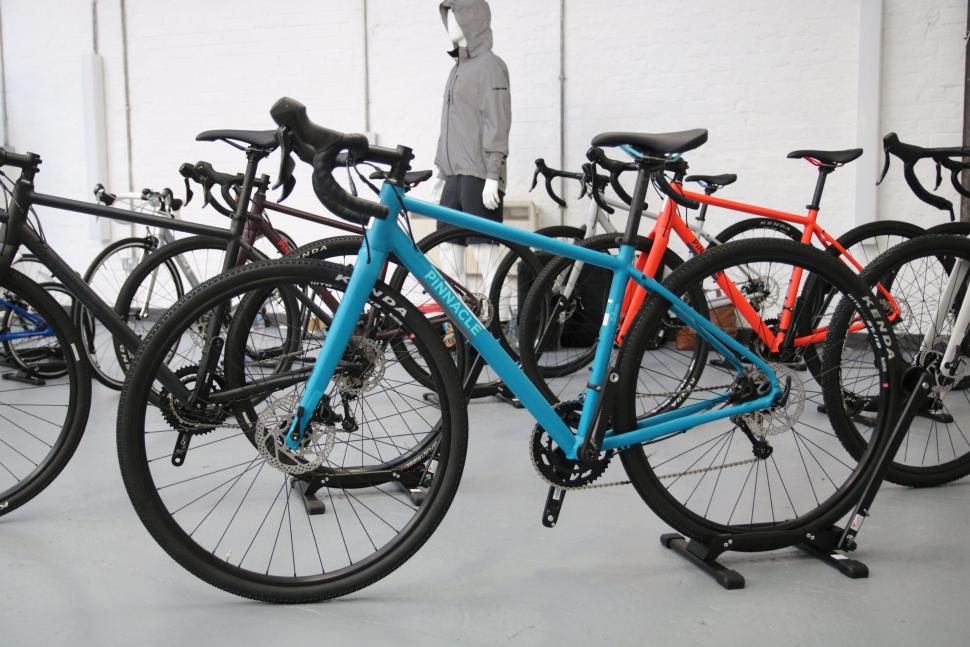 “In the US they have gravel bikes and miles upon miles open, often-smooth dirt county roads. In the UK the term ‘gravel riding’ term gets used a lot now but here it seems to mean a mix of byways, bridleways full of holes, some easy MTB terrain and overgrown paths and quiet lanes to link it all up. Just like it always did..

“The designers of Pinnacle bikes have a long history of riding drop-bar bikes in places that they’d often ride a mountain bike the next day. The Pinnacle Arkose has been go-to ‘do it all’ bike for some time and for 2017 it’s had its first revisions in a few years as our expectations of what a cyclo-cross derived ride can do keeps expanding. 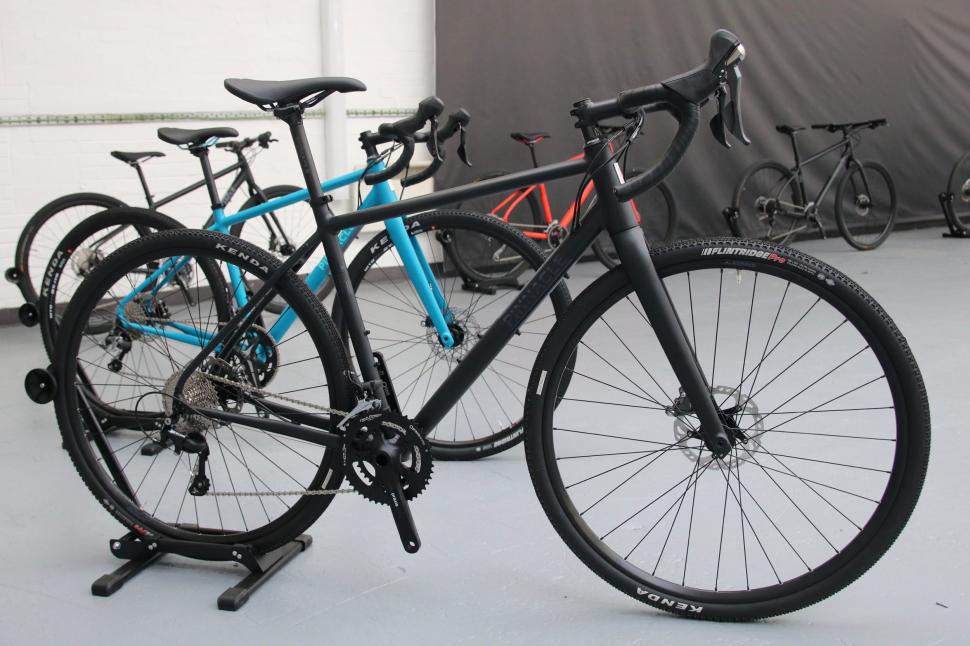 “The BB sits lower, the wheelbase is a tad longer and it’s got space for bigger tyres. The frame fit has a little more stack and works well with shorter rather than longer stems. It’s still a great bike on tarmac but it’s now a better bike off-road or over long mixed-terrain days,” says Pinnacle. 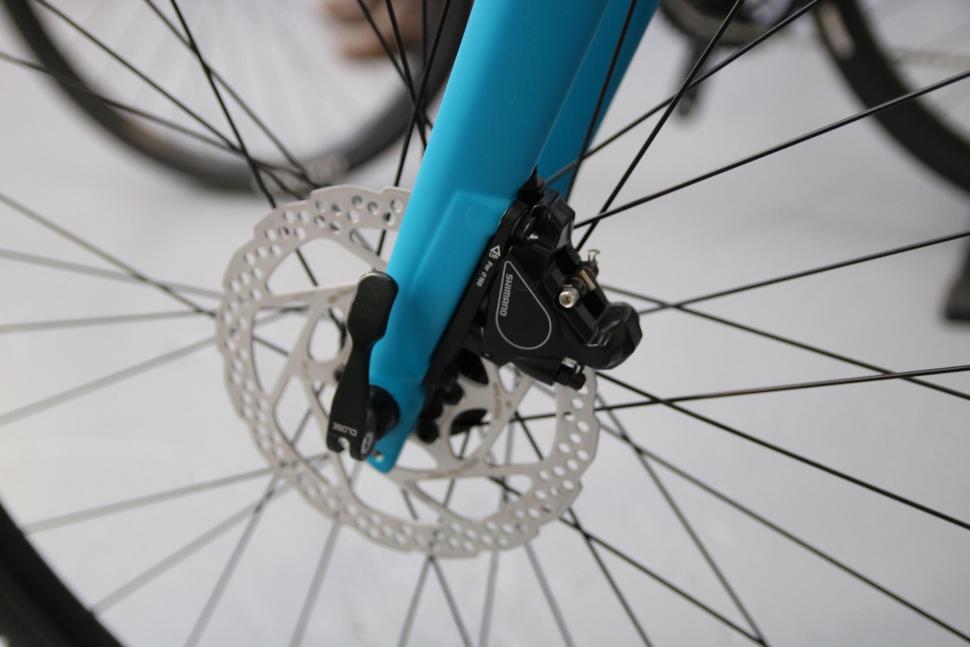 Like the Dolomite, it has been updated for 2017 with a new carbon thru-axle fork, while retaining the quick release rear dropouts. The frame has been refined slightly, with narrower diameter main tubes to save a smidgen of weight. A bigger change is the lower bottom bracket, which has been dropped about 5mm to account for the fitting of the bigger tyres the new bike rolls on, which raise the height of the bike compared to last year. The bike will take up to 45mm front and rear, with most of the range specced with a 35mm Kenda Flintridge tyre, which looks ideal for traversing from the road to the rough. 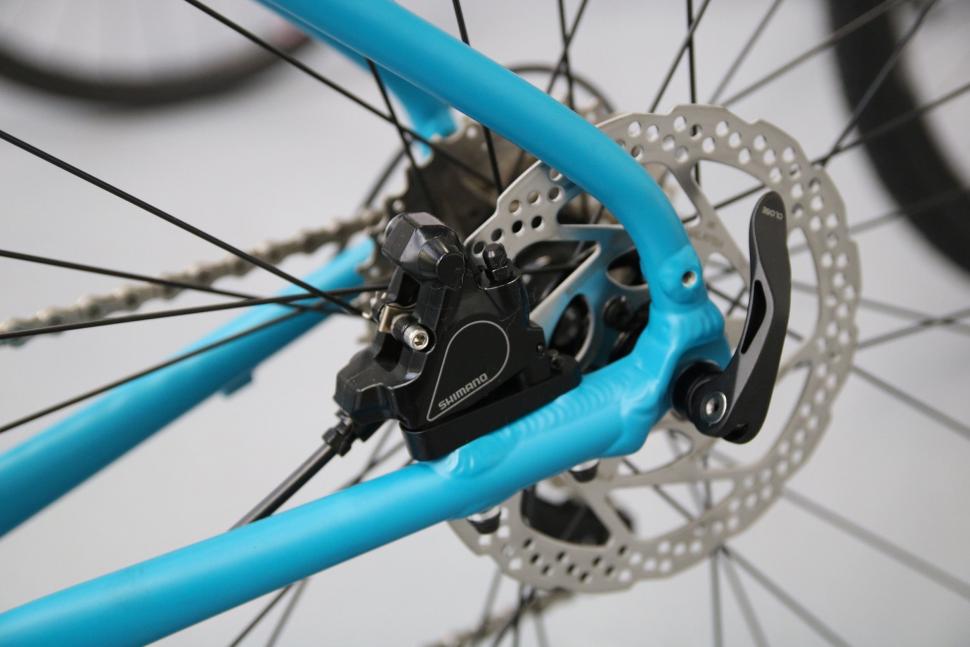 The Arkose range features five price points from £800 to £1,40 and three women’s versions which swap finishing kit, parts like the saddle, for women-specific equipment. Shimano groupsets are used across the range with 48/32t chainsets, and TRP Spyre-C mechanical discs on the entry-level model but Shimano hydraulics on all models priced £1,000 and higher. 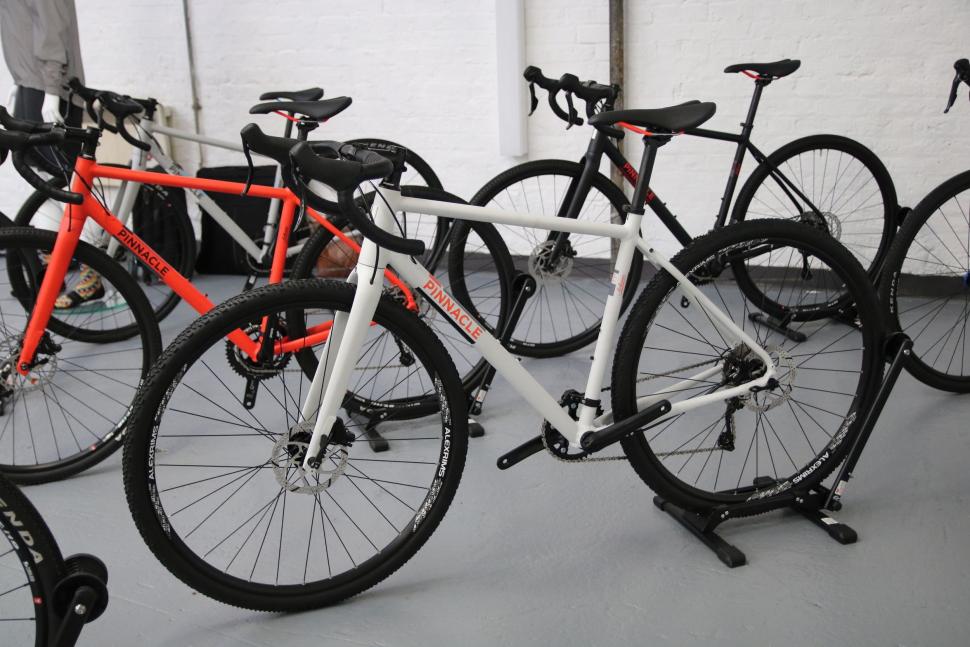 A few years ago I tested a singlespeed version of the Arkose and really enjoyed riding it. Thankfully the Arkose X (£900) is still in the lineup. Same frame as normal Arkose, but a 38t chainring with narrow/wide teeth (to provide a more secure connection with the chain) and TRP Hyflex hydraulic disc brakes with a bar-end shifter lever to operate the Shimano Deore rear mech across the 11-36t cassette. Simple and highly capable, just the ticket for blasting local bridleways and moorland tracks. 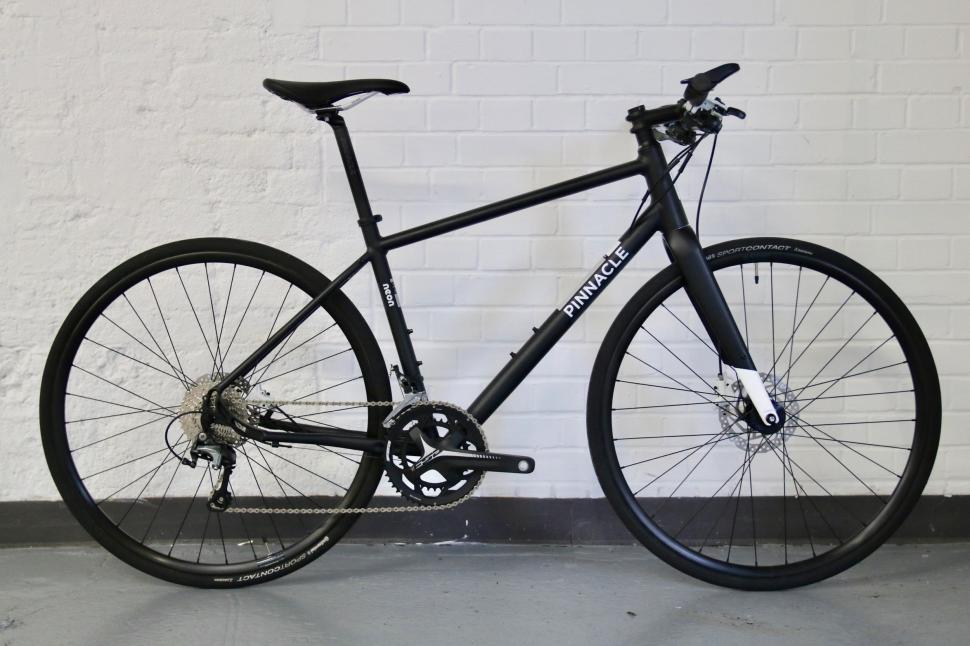 For urban and city riding, it’s hard to beat the simplicity and ease of use of a flat-bar road bike. The Neon in the Pinnacle range meets this brief, and for 2017 the range is joined by a new Neon Disc. You could view it simply as an Arkose with flat bars, as the geometry is similar, albeit it a bit slacker in the head angle and longer in the top tube (because of the flat bars which shorten the reach compared to drops) and similar big tyre compatibility - it’ll take a 40mm tyre. It basically looks like a really fast road bike for getting around town and extended commutes and is ideal for anyone that likes the idea of a road bike for its speed but is perhaps put off by the dropped handlebars and skinny tyres. 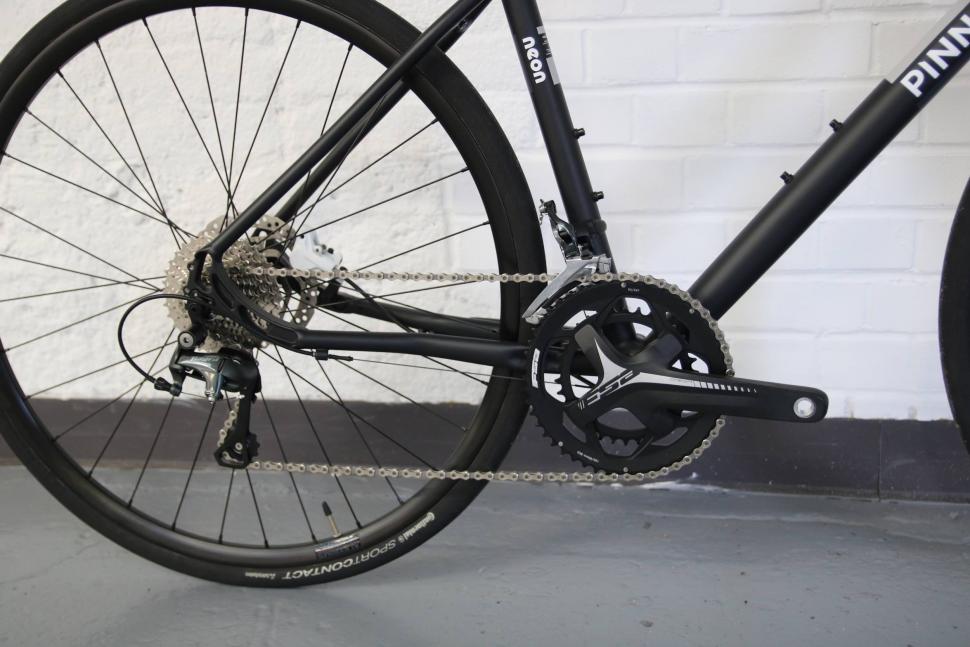 “The Neon is a true hybrid in the way it blends cyclo-cross and road bike design cues with a comfortable flat handlebar riding position and a refreshing lack of race-bike twitchiness. This mix of riding position and easy speed makes the Neon both easy-going on lanes and easy tracks and nippy about town,” adds Pinnacle. 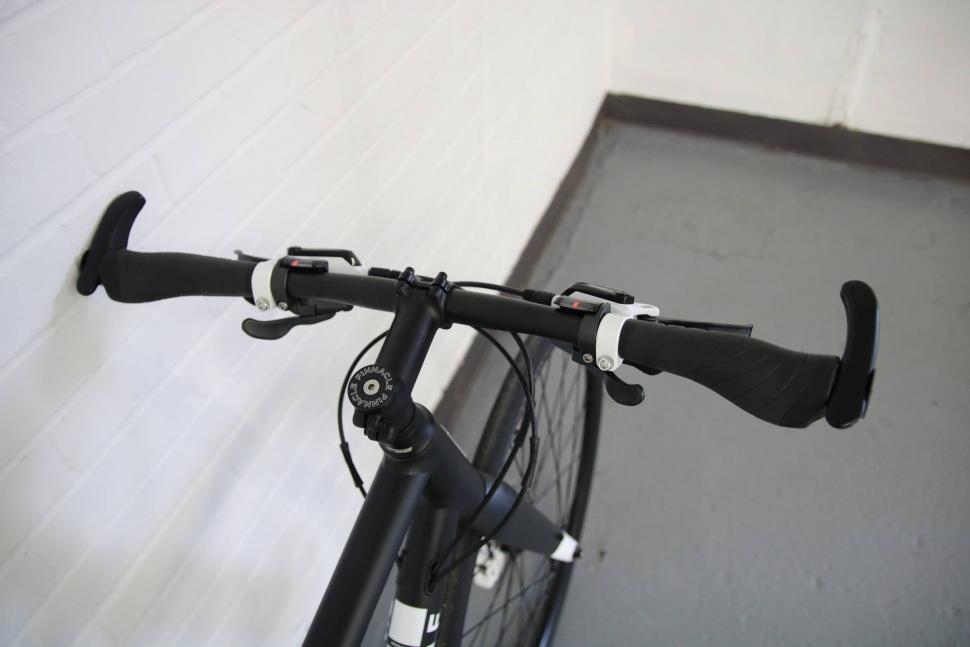 There are just two models and one women’s version, prices starting at £600 with the pictured bike costing £700. It’s equipped with a Shimano Tiagra groupset, hydraulic disc brakes and an FSA Omega compact chainset and 32mm Continental Sport Contact II tyres.

You can view the full range, all prices and specifications, at the Evans Cycles website.