We're back from Eurobike 2016, tired and a little heavier than when we left, but we've got cameras stuffed with photos of the newest kit that we'll be telling you about all week. First, here's a roundup of new products from Exposure Lights, USE, Crank Brothers, Hope, Ritchey, Apidura, PowerTap and SRM.

Exposure Lights introduce 2017 lights range in time for the winter

British firm Exposure Lights continues to evolve its impressive range of LED lights, and the latest range gets a bit brighter across the board and there are some improved electronics as well, plus a new stainless steel function button that addresses issues some people had with the previous capacitive switch. 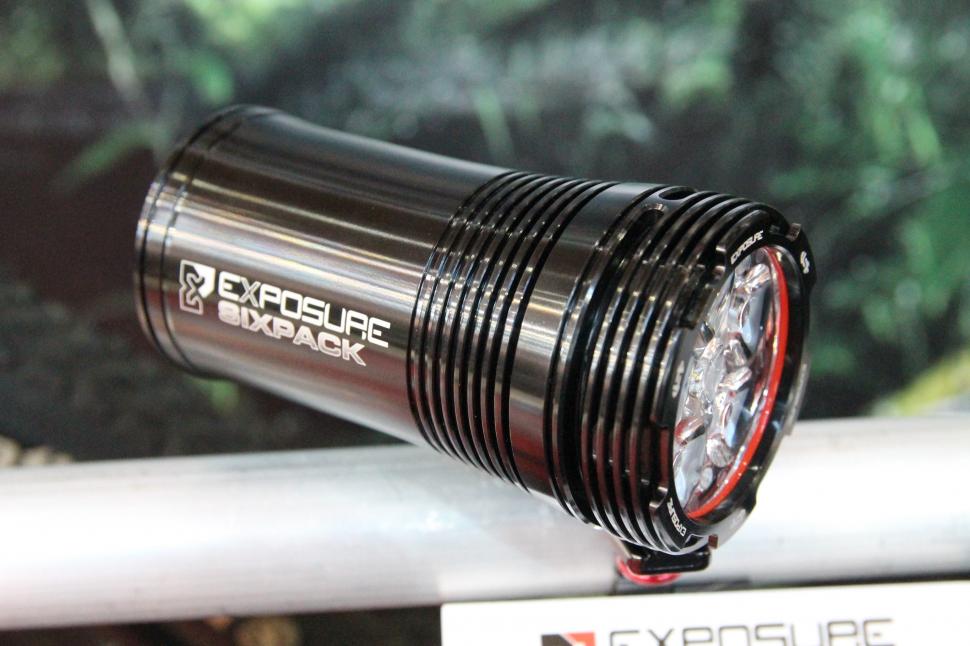 The bigger mountain bike lights such as the Six Pack and Maxx-D get new and improved Reflex Plus, a technology which adjusts the brightness based on speed, and Exposure utilises this to provide more brightness rather than extend the battery duration. And boy is the Six Pack bright, it puts out an astonishing 4,500 lumens, up from 4,000 from last year. 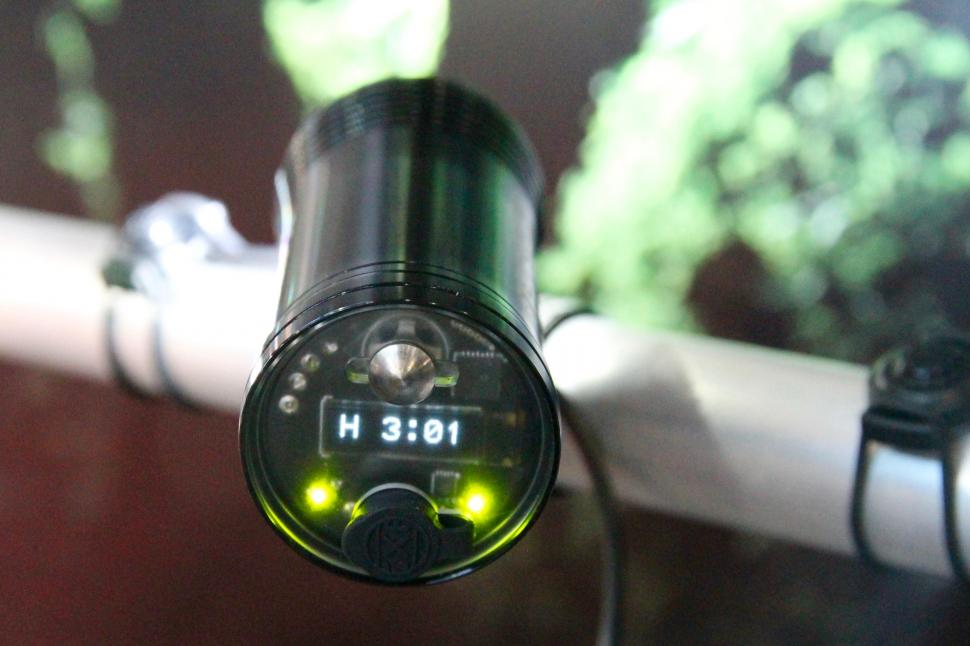 The OLED display, which handily displays more and runtime information, is now joined by two small LEDs that indicate battery status, from green to 100% to red when the battery is nearly empty. 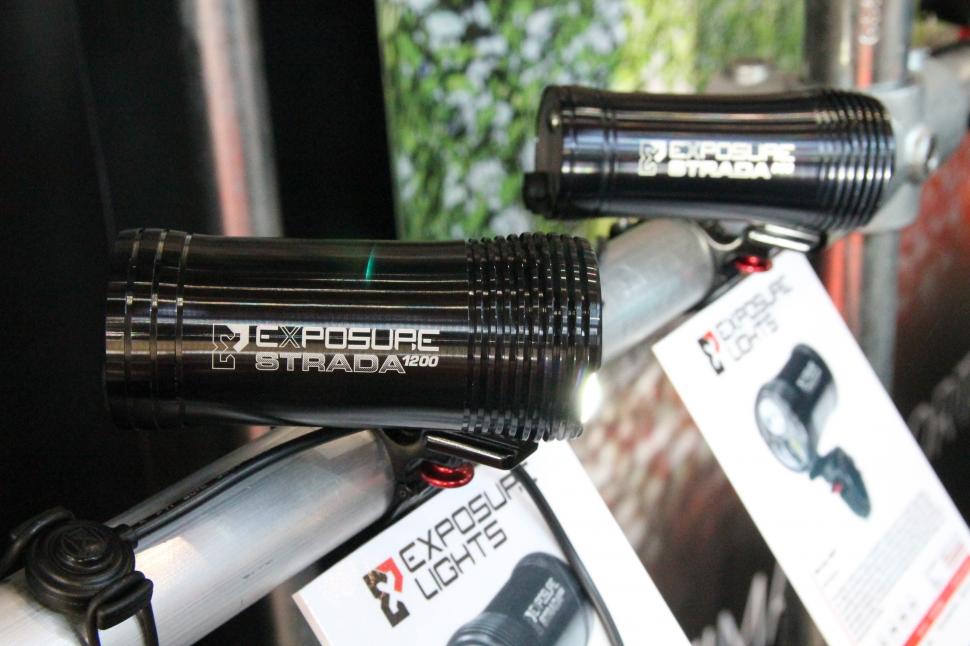 That’s a bit overkill for road cycling, so of extreme interest to us is the expansion of the Strada, a road-specific light with a lens optimised for cycling on the road, into a range consisting of two lights, the Strada 800 (£225) and Strada 1200 (£275). Last year’s Strada Mk6 pumped out 1000 lumens, but Exposure had feedback from cyclists saying it was either a bit too bright, or not bright enough, so it’s offering 800 or 1200 lumens, which should be ideal for a wide range of cycling conditions, from city commutes to Audaxes. 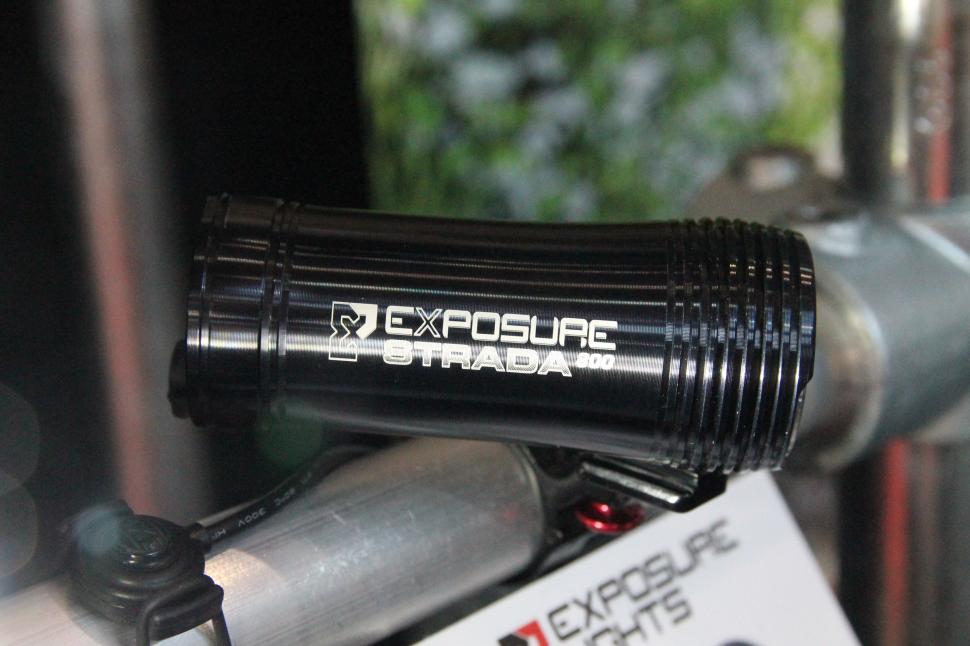 Daylight running lights are starting to get a bit more popular (modern cars all have them) and we’ve seen Bontrager already pushing the safety benefits of cycling with lights on during the day. Exposure has added a new mode to the Strada which provides a pulsing beam for daytime cycling. All the new Exposure lights are available right now, ready for the winter.

USE revamps handlebars and seatposts

USE, or Ultimate Sports Engineering, is a long-running British company that is behind the Exposure Lights brand. For 2017 USE has given its range of seatposts, handlebars and stems a complete update, with brand new logos and a raft of revisions to existing products, as well as some new ones. There's a new logo as well which better ties the new products together, if you're plumping for the full range of finishing kit. 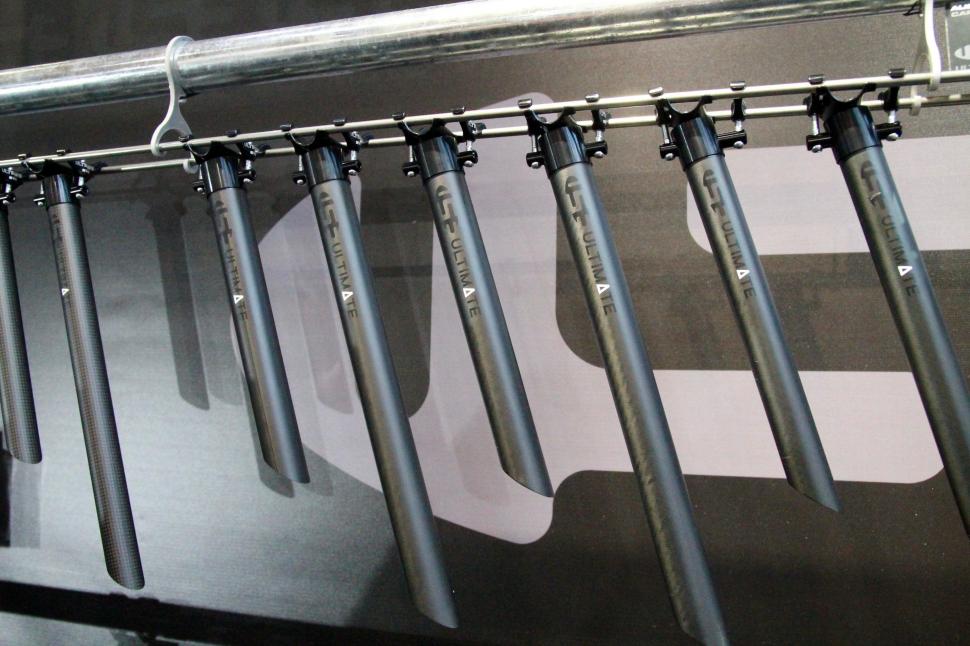 It’s offering three seat posts, the Evo, Duro and Alien. The Evo (above) is the lightest in the range and uses a classic two-bolt saddle clamp with zero offset, and uses a carbon fibre post to keep the weight down. The Duro is the strongest and most durable seatpost in the range, with 10mm setback and a choice of aluminium or carbon posts. 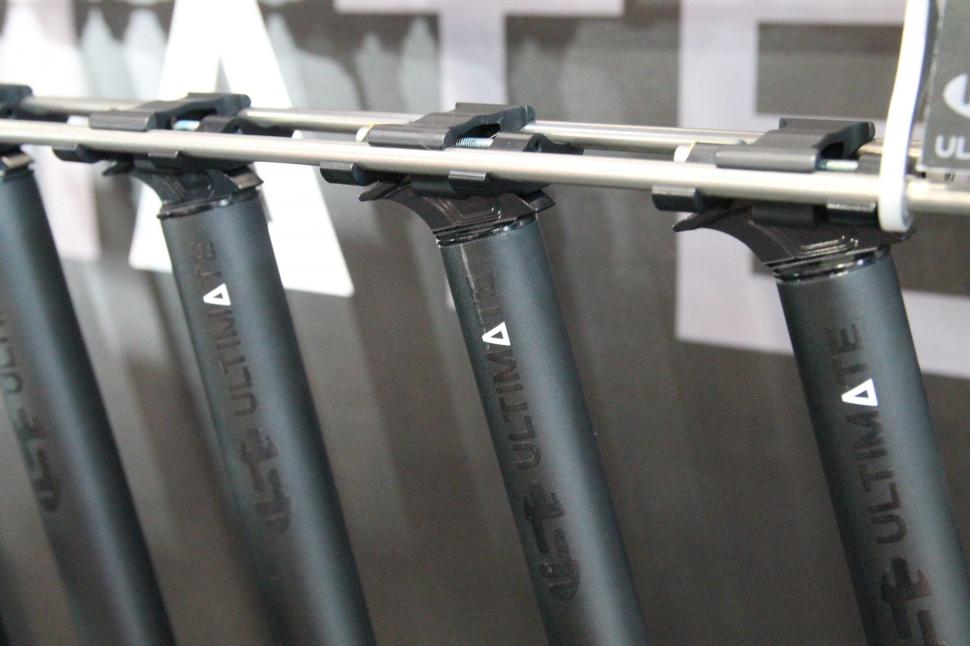 The Alien, pictured above, is a dedicated road bike seat post with a single bolt clamp and 10mm setback and is also available in carbon or aluminium.

The Summit handlebar comes in aluminium or carbon, the lightest setup is just 192g. The drops are short and shallow for easy reach. The carbon handlebar has cable guides running underneath the tops which combine with the ergonomic shape of the tops to provide a more comfortable hand position with no exposed cabling.

The Double Shot is a new pedal from the component and accessories brand that looks ideal for commuting cyclists, as well as the mountain bikers it is aimed at. 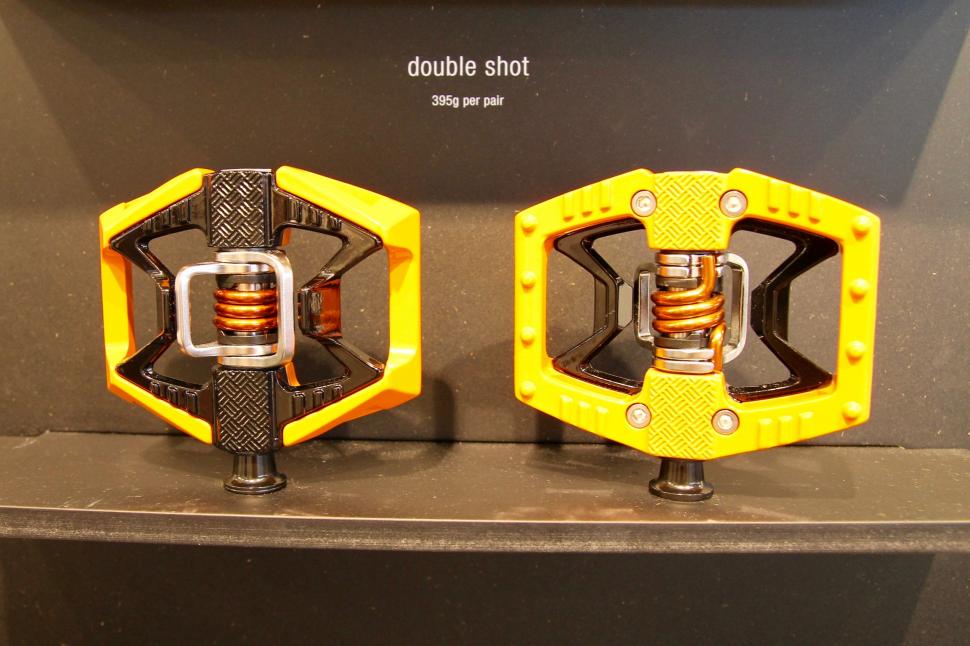 It’s a double-sided pedal with a large flat cage one side, and the company’s Eggbeater clipless pedal on the other, a mechanism which provides really easy engagement and release. Pedals like this are ideal for those times when you just want to hop on your bike and pedal away without having to change shoes first, and the big cage should make pedalling easy.

PowerTap’s first pedal-based power meter was well received when it launched, and works by incorporating strain gauges into both pedals and transmitting that data to a compatible ANT+ computer. It wasn’t cheap, though, so it has launched the P1, a single sided pedal power meter. Essentially, just the left pedal houses the strain gauges and transmits the data to a computer via ANT+. The right pedal doesn’t record power at all and it's added a counterweight in the now redundant battery compartment. A PowerTap representative at the show told road.cc that the pedal works identically to its dual-sided power meter, and while you don’t get the dual-leg power measurement, it will work very much the same in terms of power measurement. Stages have enjoyed a lot of success with its single-sided power meter and Garmin also introduced a similar single pedal power meter last year. The new P1S pedals will be available in October and cost £699, compared to £999 for the regular P1 pedals.

“While not as good as their bi-lateral brother, the P1, it is a great option to enjoy the simplicity and versatility that P1 users have grown to love,” said PowerTap product manager Justin Henkel. “And if down the road a cyclist decides they want bi-lateral measurement, the P1S will be upgradeable to dual-side measurement. There is no better way to introduce someone to power.” 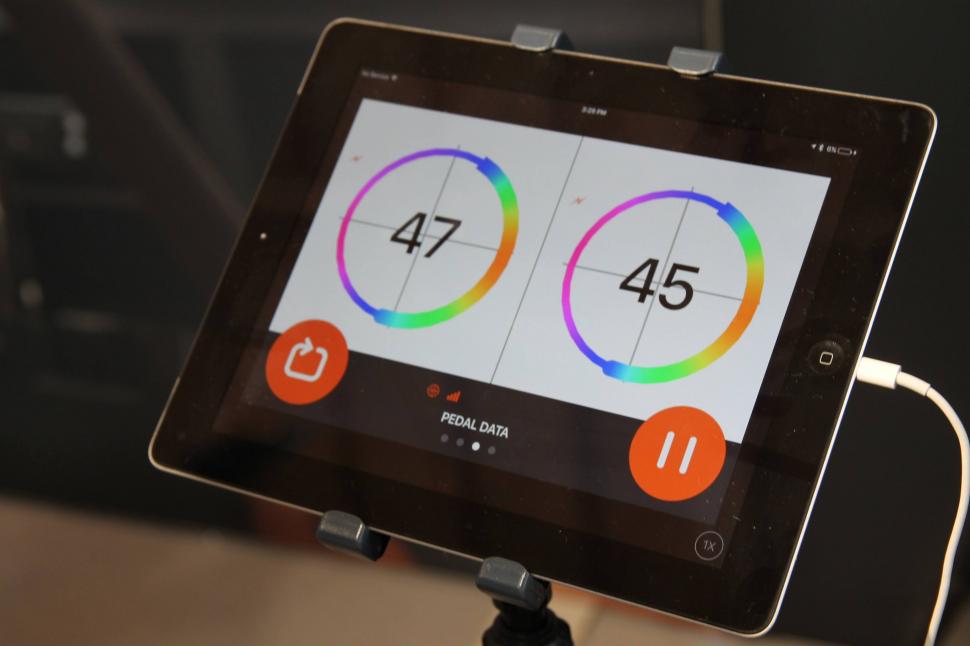 In other PowerTap news, the company has launched an updated app which provides “advanced pedal metrics” that allows you to measure and analyse the pedal stroke. There’s some interesting potential with power meter pedals not just in the ability to measure power output, but to analyse your pedal stroke with the aim to improving efficiency. 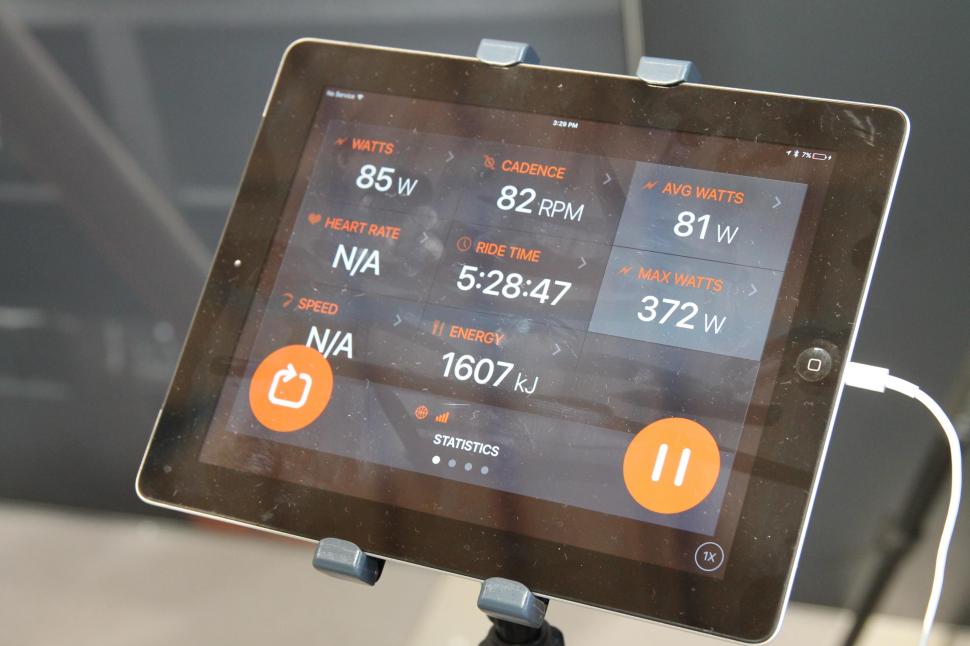 Other updates include a revamped user interface with a new interface and lots of extra functions. It’s only available on iOS devices at present, but an Android version is in the pipeline.

German company SRM has until now used existing cranks and modified them with its own power meter, but at Eurobike, it demoed its first own crank. 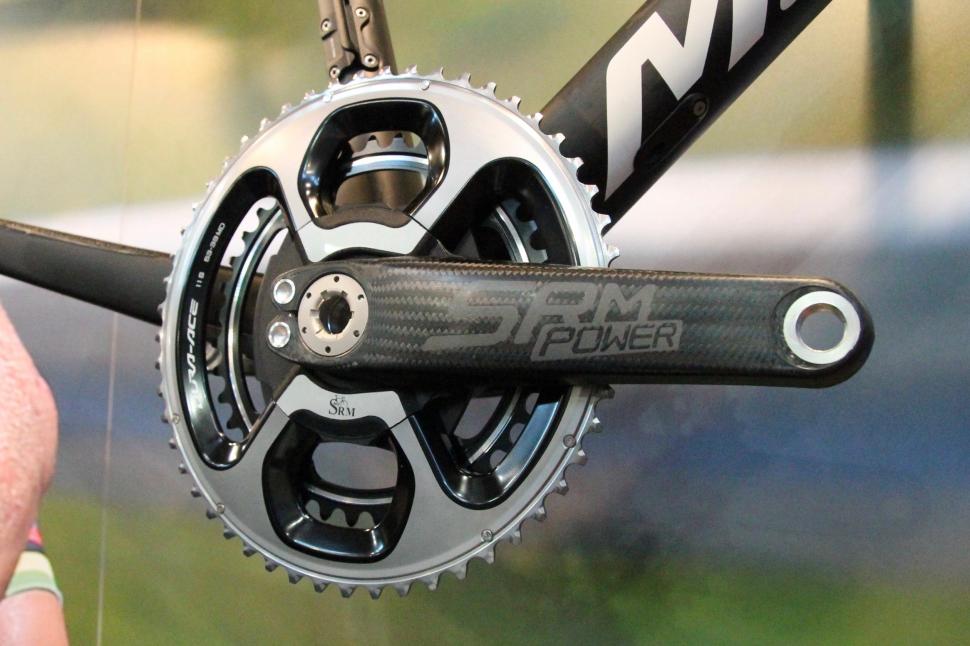 This one is made from carbon fibre with the manufactured carried out by THM, a German carbon fibre specialists. It’s apparently very light with the crank arm weighing just 99g. It’s compatible with a Shimano Dura-Ace spider and chainrings, and it’s also compatible with any bottom bracket standard. No word on pricing or availability yet, but don’t expect it to be cheap. It’s also developing an aluminium version which will be more affordable.

Ritchey is getting increasingly into the gravel category, first with the new Outback steel bike and now with the Venturemax handlebar. It’s made for adventure, says the company still owned by the legendary Tom Ritchey, and has 24-degree flared drops intended to give you a wider handlebar than a regular drop bar for more control when riding on loose terrain. It also offers a wider range of hand positions. There’s a new saddle in the 2017 Ritchey range as well, the WCS Skyline. It has a scooped sort of shape that is fairly common, with a central recessed channel and a perforated microfibre upper. This one has hollow titanium rails for a 268g weight, it’s also available with carbon rails. 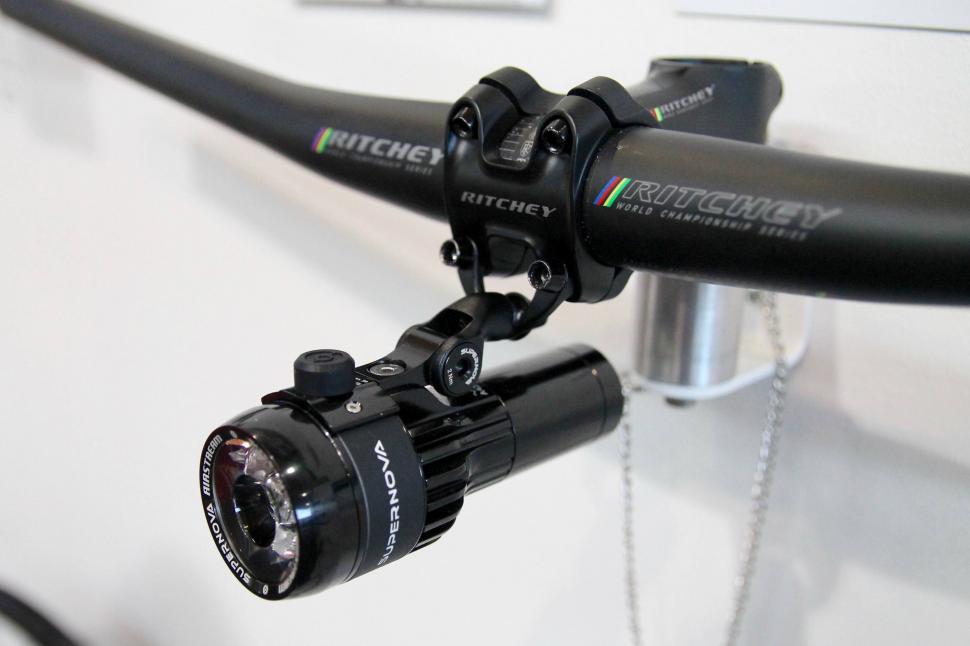 Another new product from Ritchey is the Universal  Stem Mount. It’s simply a mount for a front light that fits the front of the stem and can be used with a GoPro or Supernova front light.

Hope Technology unveiled its first ever carbon fibre seatpost earlier this year, but at Eurobike, we got the first chance to have a look at in with our own eyes. And what a lovely thing it is. The level of finish is extraordinarily high, as you’d expect from the company famed for its brakes and hubs, but also very impressive for a company that has no background in carbon fibre manufacturing at all. 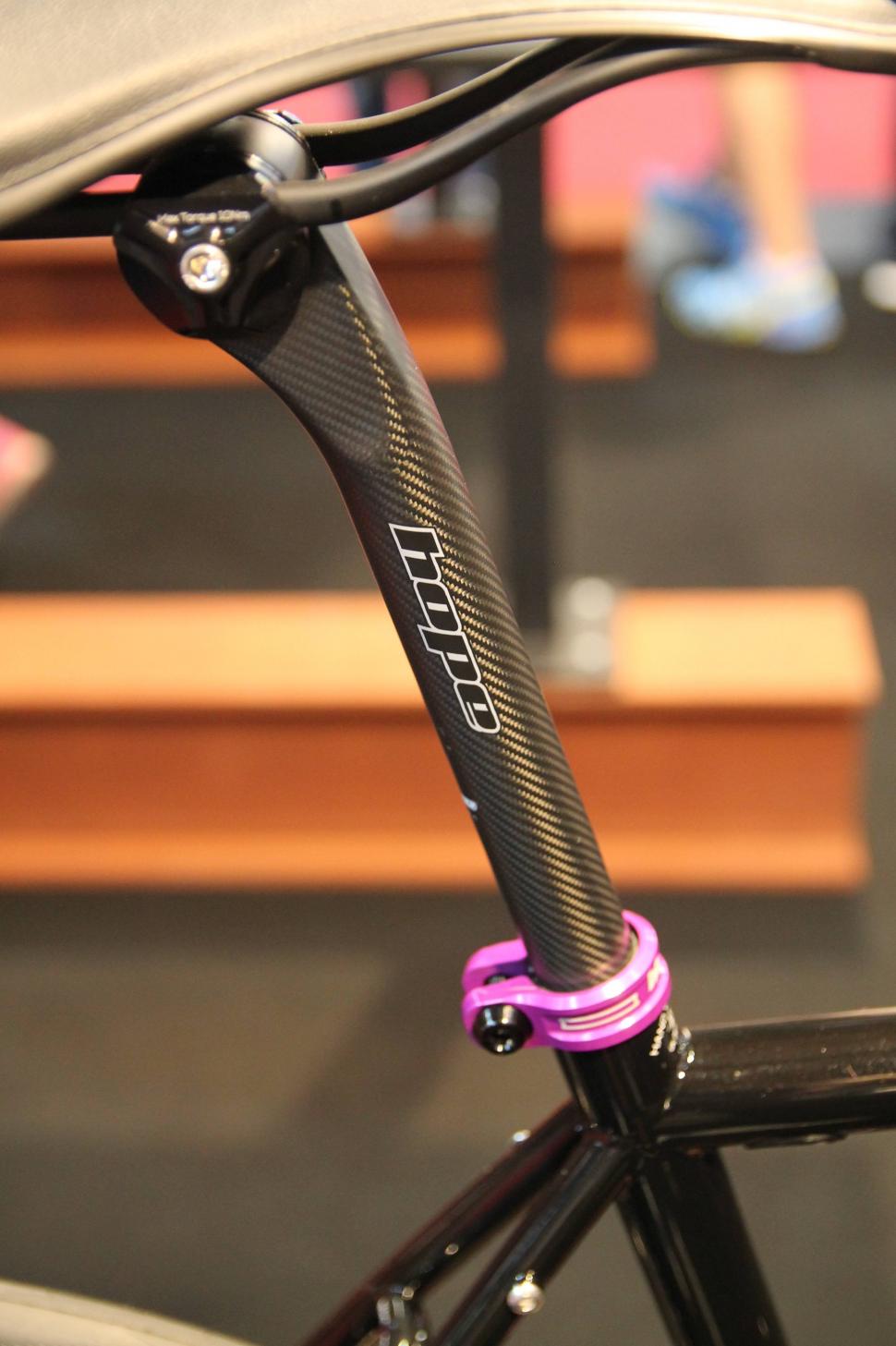 To manufacture the new carbon fibre components, Hope has invested in a dedicated 15,000 square foot composites and R&D development centre alongside its existing factory. The new seatpost is made from 24 pieces of carbon fibre, a mix of mainly T700 carbon with some 3K fibre in key places, to provide strength where needed and resist clamping forces. It's suitable for mountain bike cross-country, cyclocross and road applications. It uses a simple single bolt saddle clamp with “ultra-fine” rail adjustment. 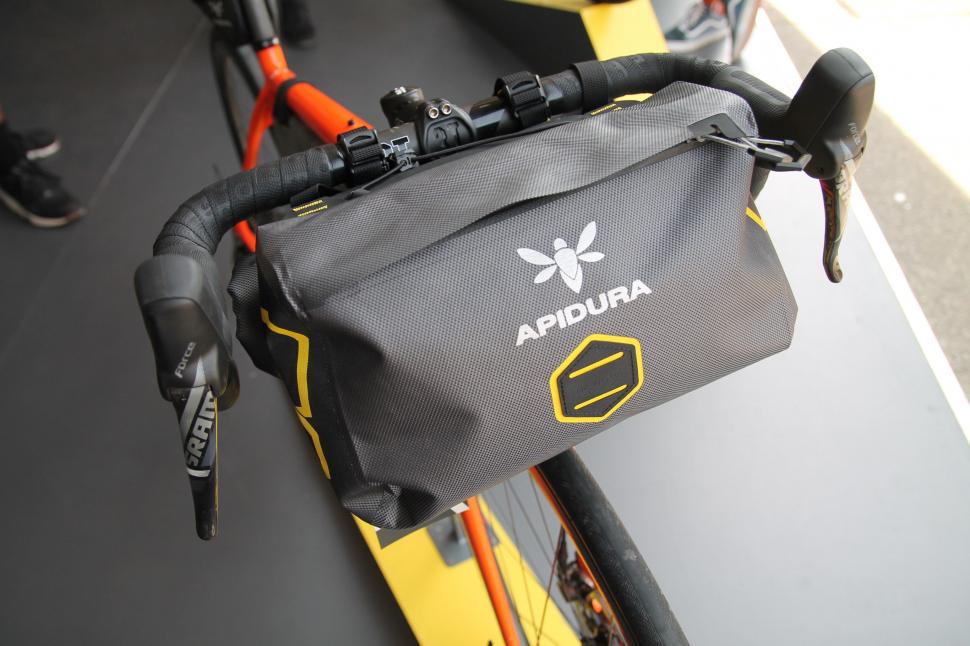 British bikepacking specialist Apidura has added the new Accessory Pocket to its range of lightweight packs for 2017. It’s designed to be fitted to the front of the Handlebar Pack, using three buckle clips, and has a 5-litre capacity. 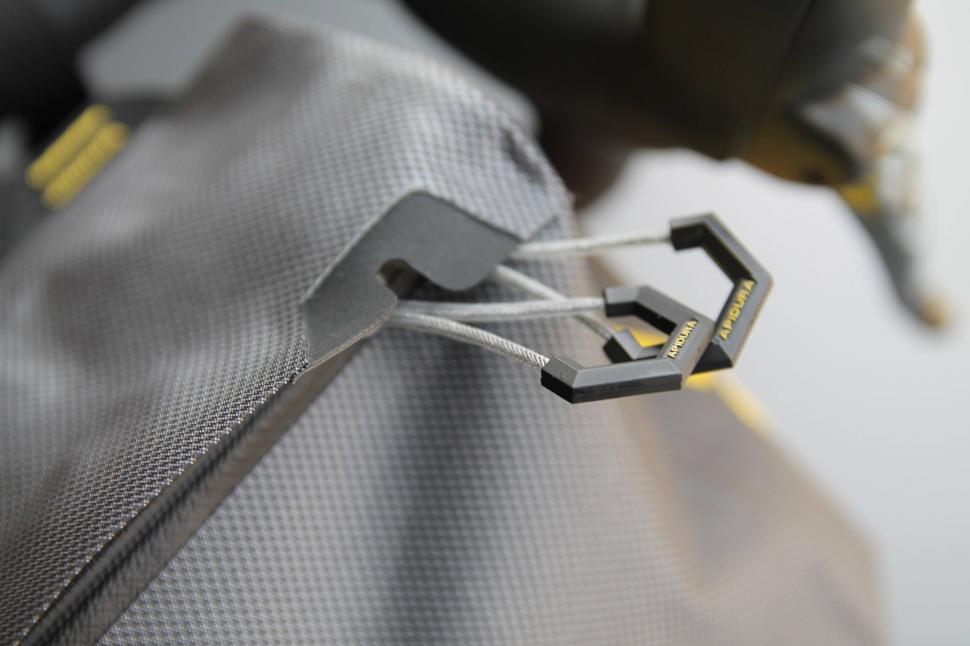 There’s an easy access zip along the top and it’s intended to be useful for essentials that you need easy access to during a ride, such as a phone, map, money or other bits and bobs. And here's the entire range fitted to a lovely orange Open UP.

You can see all our Eurobike 2016 coverage right here, and there is lots more coming this week.