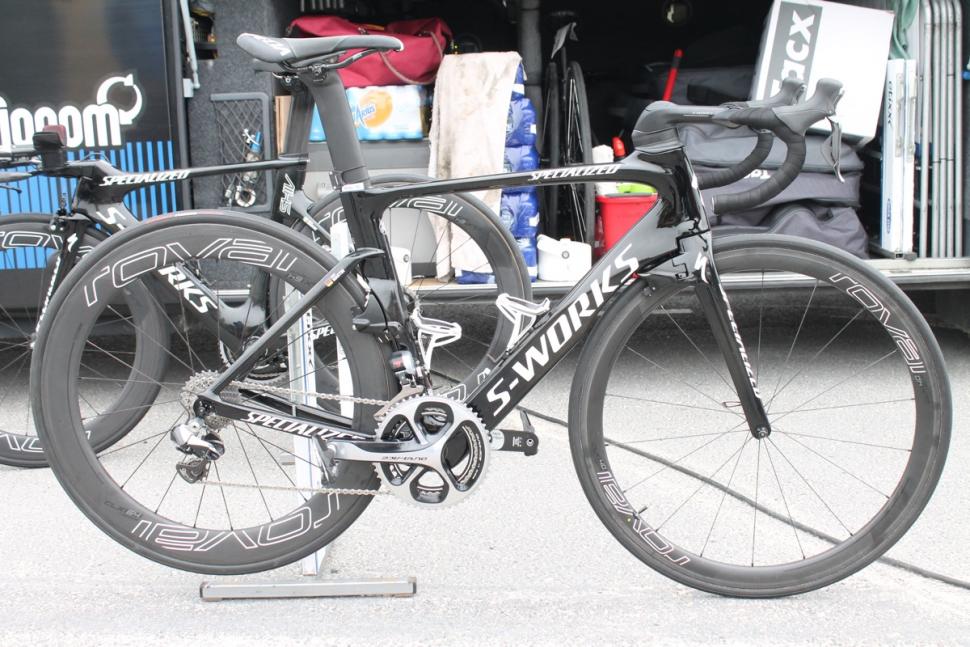 Exixx-Quick-Step’s Tony Martin was in a breakaway on today’s stage of the Tour de France aboard a Specialized S-Works Venge ViAS. He was eventually caught with about 20km (12.5 miles) to go, but let’s have a look at his bike.

We photographed this bike the day before the start of the Tour. Apologies for the cluttered background in some of the shots. Sometimes we can move the bikes to get a clear backdrop, sometimes we can’t. We bribe the mechanics as best we can but there's only so far a free pair of road.cc socks will get you.

Specialized’s Venge ViAS is an aero road bike that was launched at the beginning of last year’s Tour de France, the first bike to have been developed in Specialized's own wind tunnel (it calls it the Win Tunnel).

The Venge ViAS doesn’t have much in common with the previous Venge, with a completely new front end and a smaller rear triangle; the seat stays now meet the seat tube well below the top tube, a result of every tube shape and trailing edge having being scrutinised to make the bike faster, according to Specialized.

The brakes are proprietary integrated callipers. Specialized calls them Zero-Drag Brakes because, it claims, they create a “near-zero drag coefficient”. 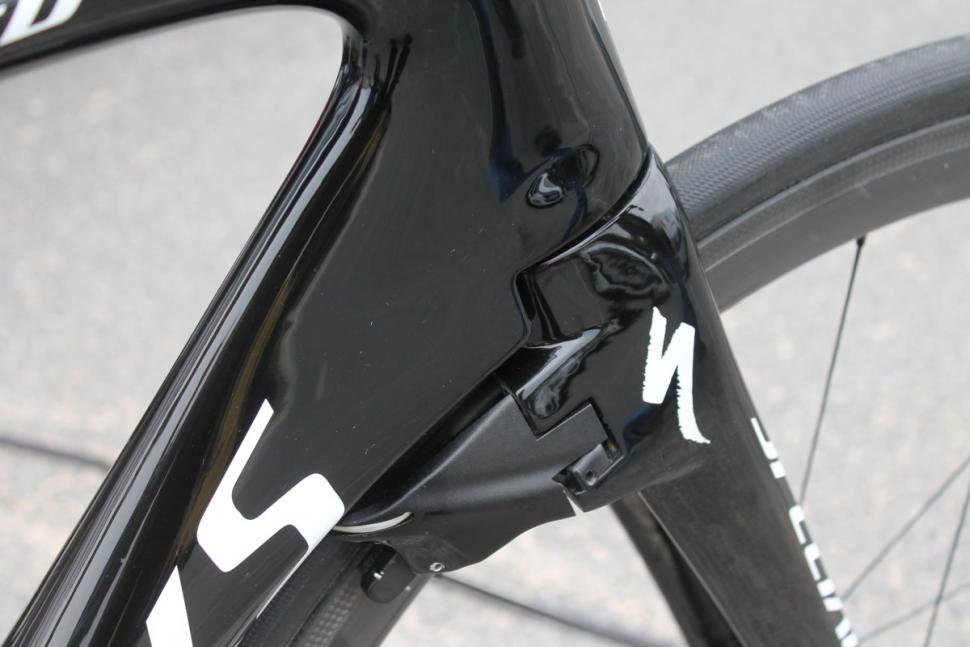 Specialized says the front brake completes the fork’s trailing edge, while the rear brake drafts off the seat tube and water bottle mount. The brakes are located in positions of minimum wheel deflection, Specialized claims, to eliminate the potential for brake rub during sprinting and to provide better braking performance.

A key change to the Venge introduced just days before the race, is an update to the brakes. Specialized engineers were over from the US to help team mechanics install the new brakes.

The updated brake has a longer spring and a new bushing from Germany’s Igus in place of the previous brass bearings. This change is said to improve lever feel and durability. 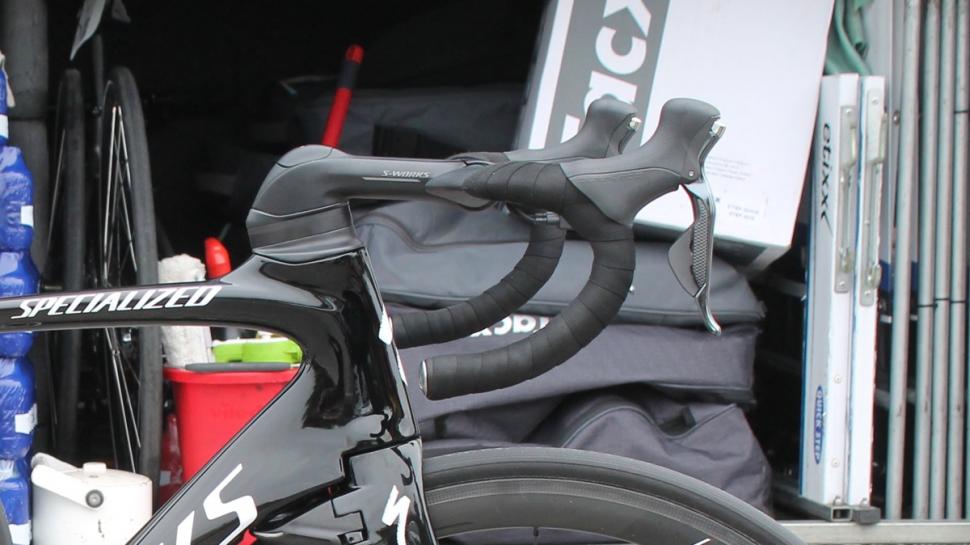 The cables pass through the Specialized S-Works Aerofly handlebar and into the stem, then through spacers that feature cable guides, and then into the frame. 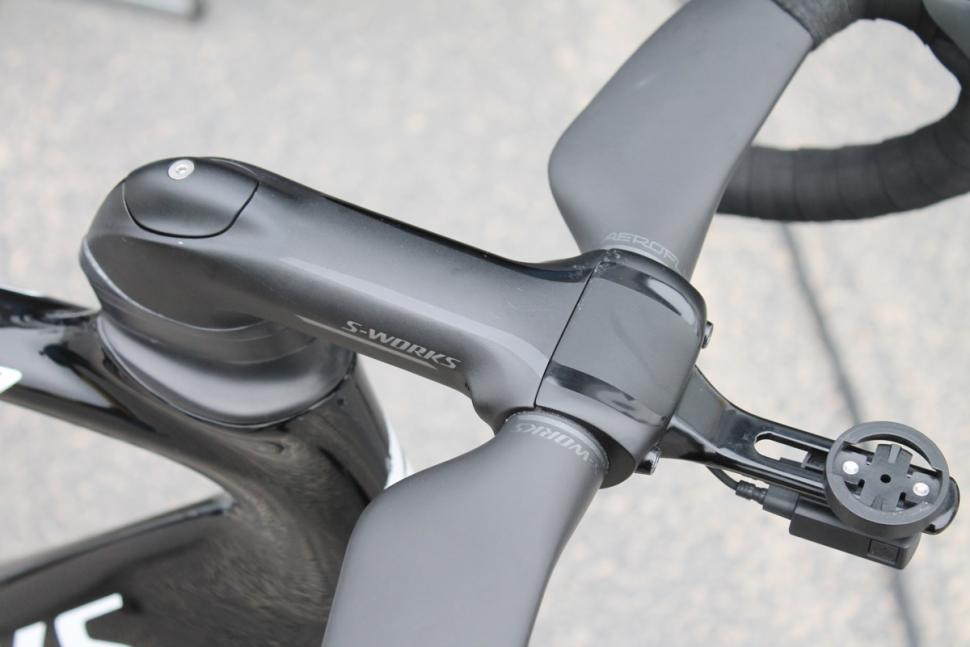 Etixx-Quick-Step uses Shimano Dura-Ace groupsets and this bike is set up with the Di2 electronic version.  You can see the junction box attached to the underside of the computer mount where it’s very accessible for on-the-fly adjustments. 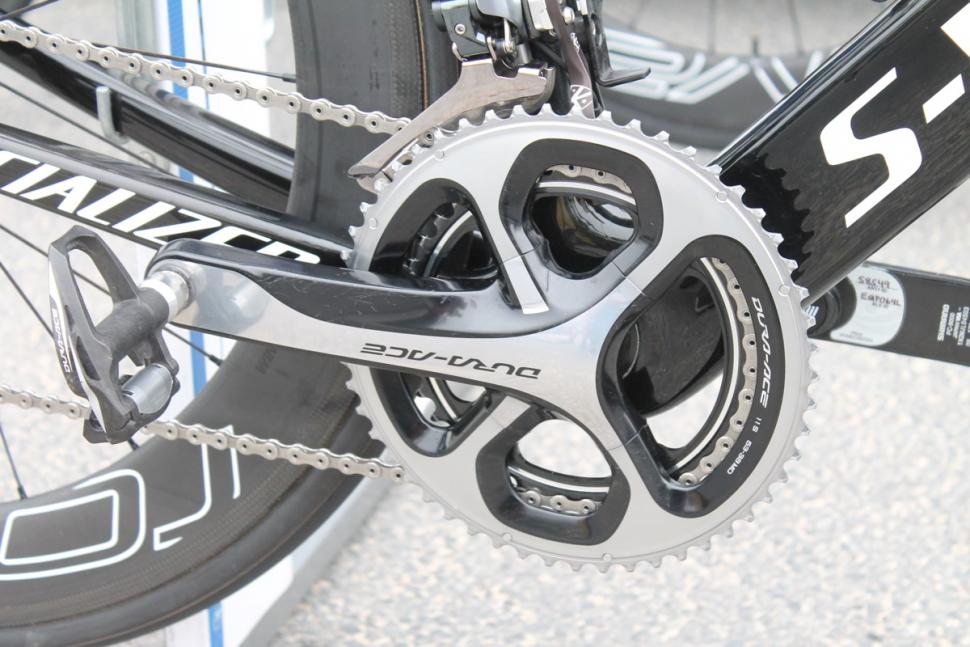 This bike is set up with a 53/39-tooth chainset, and Tony Martin uses 175mm crank arms.

Etixx-Quick-Step uses crank based Precision power meters from 4iiii. This bike appears to be fitted with the version that measures only the left leg, although the team also have the Precision Pro dual sided power meter that will be released to the public very soon.

A K-Edge chain catcher stops the chain coming off the inner chainring, and those are Shimano Dura-Ace SPD-SL pedals on there. 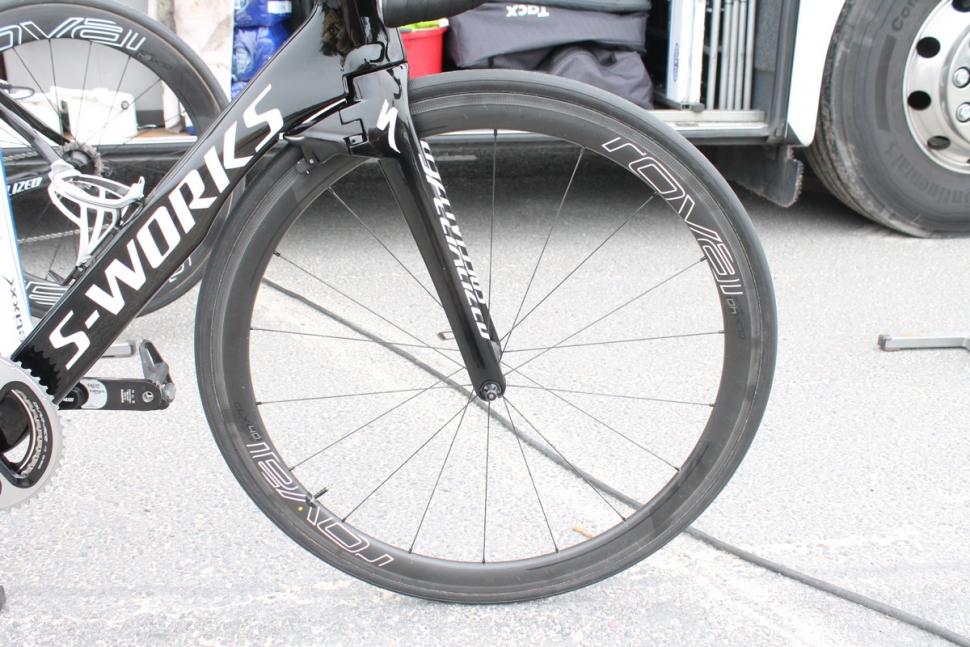 The bike is fitted with Specialized’s Roval wheels front and rear, but they’re different depths. The rear wheel is a CLX 64, the 64 referring to the rim depth in millimetres, while the front is a CLX 40, presumably chosen for greater stability in crosswinds. The rims are carbon, including the braking surfaces, while the hubs are Specialized’s own, running on CeramicSpeed bearings. 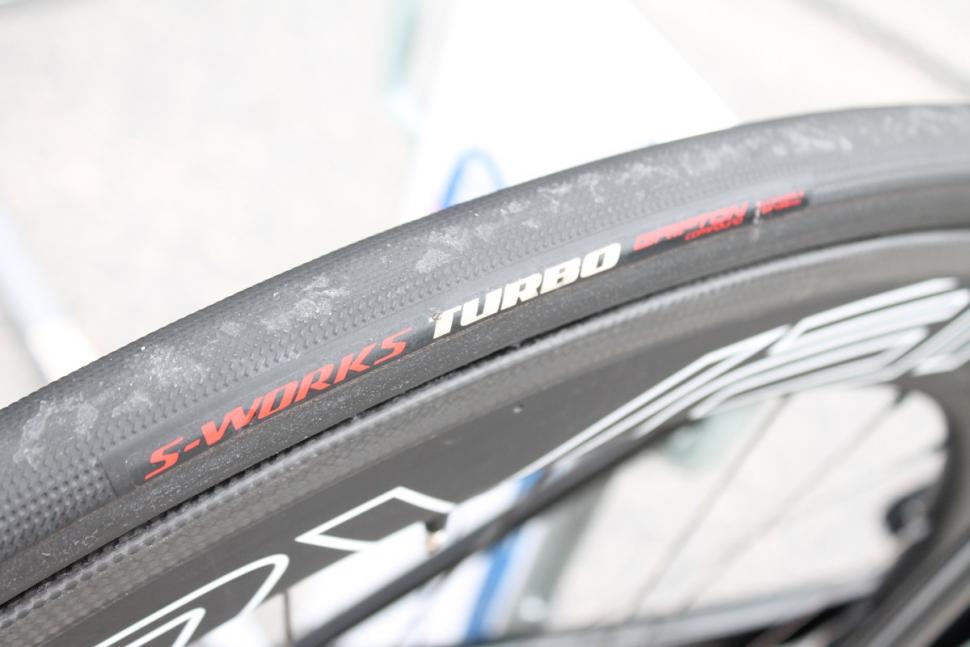 The tyres are Specialized’s S-Works Turbos. The saddle is from Specialized too. It looks like a Romin with carbon fibre rails. We don’t remember one exactly like this in the Specialized range (perhaps you do) although Tony Martin has been using ones similar to this for some time. There was one on his bike in last year’s Tour de France, for example.